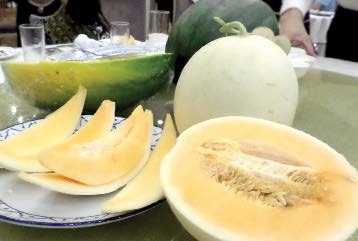 Two promising high-value crops from Known-You Philippines (KYP) were presented during a recent dinner in San Juan  City by Julius Barcelona, a special assistant to the vice-general manager of KYP.

One is a honeydew melon with orange flesh while the other is a watermelon with yellow flesh. These new varieties are undergoing trial plantings at the KYP experimental farm in Rosales, Pangasinan and in farmers’ fields in the province. 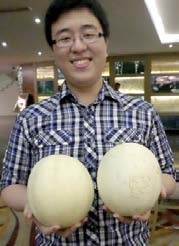 The orange-fleshed honeydew is the Sky Lady, developed in Taiwan. The fruit is about 1.5 kilos each. What is very interesting, according to Julius, is the transformation of the flesh after it is stored for four to five days after it is picked.

Julius said that the flesh is hard and crisp when newly picked from the vine. After it is aging for four to five days, the flesh becomes very tender, smooth, and juicy.

The other high-value crop being field-tested in farmers’ field and at the KYP farm is an oblong watermelon with a dark green rind and yellow flesh.

The Oro watermelon (left) is juicy and creamy, which is why farmers in Pangasinan have called it the Ice Cream watermelon.

The varietal name is Oro but farmers in Alaminos, Pangasinan, would rather call it the Ice Cream watermelon. Why? Julius says that Oro is a very juicy and creamy hybrid, that’s why.

Meanwhile, the two crops were test-marketed in Baguio some time ago. Because of their excellent eating quality, the tag price was P50 to P60 per kilo, which was about double the price of the counterpart fruits in the market. The result? The fruits were all sold out much earlier than Julius imagined.