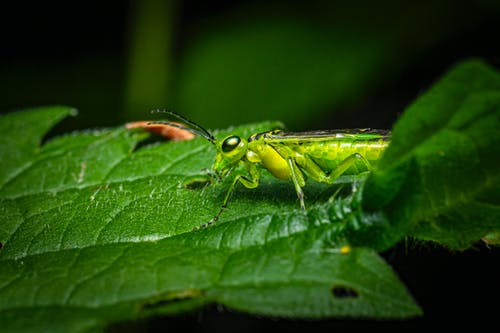 There is good news and bad news these days for cotton growers in the southwestern United States. Widespread use of Bt cotton, along with progress in eradicating the boll weevil, has reduced the need for spraying broad-spectrum insecticides. That’s the good news. The bad news is that cotton still faces a serious threat from the western tarnished plant bug, Lygus hesperus.

A particularly hardy species of plant bug, L. hesperus is capable of surviving extremely dry conditions, 107°F heat, and freezing temperatures. Along with cotton, the bug is a major pest of seed alfalfa, strawberries, and canola, and many growers rely on insecticides specifically to control it.

Brent and colleagues J. Joe Hull and Dale Spurgeon are searching for new ways to control L. hesperus by studying its feeding habits and examining two key survival mechanisms: its activation of thermal stress genes to cope with heat and its ability to go into diapause when winter approaches.

“We want to target this insect’s vulnerabilities, and to do that, we need to know more about its behavior and physiology,” says Hull. Information gleaned from the research could advance efforts to control other insect pests as well.

Surveying the fields: The importance of an accurate count

Before deciding whether to spray insecticides to control L. hesperus, cotton growers often walk through their fields waving hand-held nets, count the number of lygus bugs they capture, and make a decision based on established population thresholds. Thresholds vary from one cotton region to the next. Spurgeon and ARS scientist W. Rodney Cooper, who is now with the Yakima Agricultural Research Laboratory in Wapato, Washington, have found that these “sweepnet” survey results can be easily misinterpreted. Results of their studies on the insect’s feeding habits also show that factors important to the decision-making process are often overlooked, including the age of the insects collected in the nets, the growth stage of the cotton, and the type of cotton being cultivated.

“These all have an impact on how this insect pest feeds and on how much damage to a cotton crop it is likely to cause,” says Spurgeon. He and Cooper conducted the research while at an ARS research site in Shafter, California.

In one study, Spurgeon and Cooper videotaped some L. hesperus feeding on cotton in the laboratory and released others to feed on caged cotton plants in the greenhouse. Their goal was to assess feeding habits and damage levels caused by two types of nymphs (3rd and 5th instars) and by young (prereproductive) adults. In another study, they examined feeding damage caused by three classes of adult insects (prereproductive; reproductive and unmated; reproductive and mated) by releasing insects on cotton plants so they could feed for up to 7 days.

The studies were designed to address whether the age of the insect plays a role in the damage levels. Results showed that nymphs and young adults, regardless of reproductive status, cause significantly more damage than older adults.

This led them to wonder how differences in feeding habits and damage levels, seen in different age groups, influence the numbers turning up in the sweepnet surveys. So, in another study, they marked adult L. hesperus with nail polish and periodically released them into 10-meter rows of upland and pima cotton. They followed standard sweepnet protocols in collecting as many of the marked insects as possible the day after each release, along with any wild L. hesperus attracted to the cotton.

The number of marked insects caught indicated the efficiency of the collection efforts. Releases and collections were conducted over two growing seasons. Insects caught in the nets were dissected to verify their ages.

The researchers found that in pima cotton, the more damageinducing young adults preferred to feed on the ends of the plant branches, which are substantially shielded by foliage. That makes them harder to capture and more likely to be undercounted. This wasn’t an issue in upland cotton, because it has a more open architecture. They also found that in both species of cotton, the wild populations were dominated by mature adults that cause less damage. As cotton plants grew, the sweepnet collection efforts became less efficient, because larger and leafier plants gave the insects more foliage for “hiding out.”

Taken together, the results suggest that sweepnet methods for establishing thresholds for spraying may need to be reevaluated, and there may be a need for cotton-species-specific sampling methods.

“This pest causes different levels of damage at different stages of its life cycle. It may be important to know the ages of lygus infesting your cotton, not just the total numbers,” Spurgeon says. The sweepnet study was published in July 2013 in the Journal of Entomological Science. The study that examined damage levels from adults in various stages of development was published in Environmental Entomology (April 2012), and the study comparing damage by nymphs and adults has been accepted for publication in Environmental Entomology.

Brent and his colleagues explored the pest’s overwintering biology by focusing on the ability of L. hesperus to protect itself by entering diapause. L. hesperus adults will enter diapause as the seasons change and the days grow shorter. The diapause is tied to reproductive capabilities and cold tolerance. Some adults develop mature reproductive organs and will never enter diapause, while others defer development and can apparently use the resources diverted from reproduction to survive. The researchers say that differentiating how the pests respond to their environment when in or out of diapause could reveal weaknesses that can be exploited to enhance current control strategies or to develop novel controls.

“They might become more or less susceptible to control approaches, depending on seasonally occurring changes in their behavior and development,” Brent says.

The scientists induced diapause in lab-raised L. hesperus by exposing them to shorter day lengths. The behaviors and activity levels of the diapausing insects were compared to those of insects that never entered it. The researchers compared how much fat the insects stored, the amount of time spent feeding and at rest, and survival rates when starved and dehydrated. They put the insects in chambers designed to measure metabolic rates and even tethered them to tiny metallic arms to compare frequency of flight, flight speed, and distances traveled over 24-hour periods.

The results, published in Entomologia Experimentalis et Applicata (August 2013) showed that “diapausers” spent more time resting and less time feeding, had more body fat, and survived three times longer than insects that never entered diapause. Flight patterns were about the same in each group, but differed between females and males. The findings are expected to help scientists in their search for future control strategies among L. hesperus’s survival tactics.

Hull and his colleagues are also working toward silencing genes that L. hesperus uses to survive environmental stress. To achieve that, they studied the molecular underpinnings of a specific class of proteins, known as “heat shock proteins,” used by the insect to survive intense heat. Heat shock proteins have been identified as survival mechanisms in honey bees, silk moths, mosquitoes, fruit flies, and whiteflies. Identifying them in L. hesperus and studying how they function would shed light on the molecular mechanisms the insect uses to cope not only with intense heat, but also with other stress factors, such as drought and cold, the researchers say.

They used DNA sequencing technology to develop a “transcriptome,” a snapshot of the genes expressed at a specific stage in the insect’s development. Transcriptomes are less expensive than sequencing an entire genome and have been developed for other insect pests. The L. hesperus transcriptome focused on genes expressed in the first 5 days of adult development. Among the many genes found in the transcriptome, the researchers identified 42 that they think may be responsible for synthesizing heat shock proteins. The researchers then compared gene expression patterns between L. hesperus maintained at 77°F and those exposed to 102°F for 6 hours.

They found that the induced heat stress caused robust changes in the gene expression pattern of two suspected heat shock proteins, moderate changes in two others, and no changes in four others.

The results, published in PLOS One in January 2013, provide researchers with a key to finding mechanisms that control the pest’s ability to survive such intense heat.

(Reprinted from the January 2014 issue of Agricultural Research magazine)