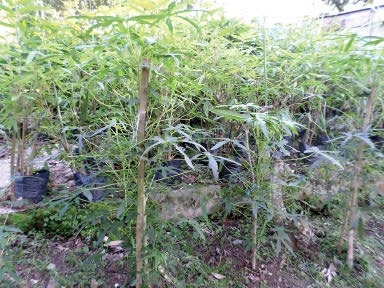 Lagikway a.k.a. Liway or Gikway, growswellin the ground, especially when applied with organic fertilizer and sprayed with Power Grower Combo, a plant growth accelerator.

One indigenous vegetable bush that should be popularized in many parts of the country is what is variously called Lagikway, Gikway, and Likway, depending on the place where the plant is grown.

This plant, botanically known as Abelmoschus manihot, usually abounds in Quezon province, Bicol, and places in Mindanao like Dinagat Island, Zamboanga, and other provinces. It is virtually unknown, however, in northern Luzon.

The young leaves are the edible portion. In Bicol, according to Nilda Montilla, the leaves are usually used for wrapping fish for ‘pinangat’ or ‘paksiw’. In Zamboanga, according to Henry Montilla (Nilda’s brother-in-law), Likway (that’s what they call it there) is used in soupy dishes like sinigang and other vegetable preparations. 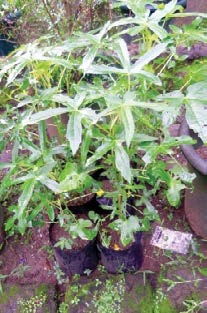 Lagikway is very easy to multiply by rooting semi-mature cuttings.
Above are rooted cuttings in black
plastic nursery bag.

On the other hand, Dr. Rodel Maghirang—a university researcher from UP Los Baños who is from Quezon province—says that aside from the preparations cited above, he loves to just blanch the young leaves in a microwave. He then dips the blanched leaves in soy sauce with calamansi. Sometimes, he makes an omelet out of the young leaves. What is good about Lagikway, he said, is that it has a neutral taste. It has no distinct or strong aroma that may not be liked by some consumers.

The Lagikway is related to the okra, and its leaves have that slimy characteristic of the okra and saluyot. This characteristic, many believe, is proof that it has special health values. Okra, which is a favorite of the Japanese, is believed to absorb extra cholesterol in the body.

What is also good about Lagikway is that it is a perennial bush that can be maintained in the backyard as a sustainable source of the fresh vegetable. It can be grown in the ground as well as in pots or containers. For as long as it is well taken care of, it will thrive for many years. Fertilizing the plant in the ground with organic fertilizer like Durabloom will sustain robust growth. There are even better results if the plant is sprayed with Power Grower Combo, a plant growth accelerator formulated by Alfonso G. Puyat.

Another advantage of this indigenous bush vegetable is that it is very easy to multiply with the use of cuttings. Semi-mature cuttings will easily take root in a matter of weeks.

According to Dr. Maghirang, there are several variants of Lagikway in leaf form. Some have broad leaves. Others have deeply divided leaves. Some have dark green leaves while others have light green leaves. His favorite is a variant with a yellowish petiole.

Dr. Maghirang said that he has not seen any flowering Lagikway in Quezon province. The first time he saw one that flowered was in Ormoc City. He would love to see more flower-bearing Lagikway so he can produce his own hybrid.

He says that Lagikway is usually found in areas where rainfall is more pronounced, like Quezon and other parts of the country. Will Lagikway thrive in the Ilocos in the north where there is a long dry season? Dr. Maghirang said there should be no problem as long as the plants are watered whenever the soil is dry, and the plants are adequately fertilized.

Incidentally, we acquired some mature cuttings during our trip to Dinagat Island in July last year. We now have quite a number of propagations in our small farm in Teresa, Rizal. We will now start trying some Lagikway recipes.