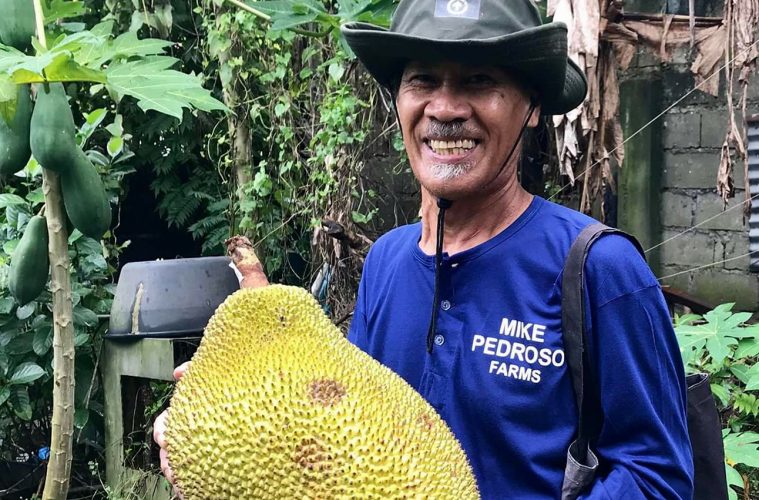 Mike Pedroso, 65, is an early retiree who chose to farm after feeling exhausted from working in the corporate world.

Retiree’s farm produces the sweetest variety of jackfruit and earns about ₱50,000 a month

To be happy, to be healthy, and to leave a legacy – these are the rationale of Miguel ‘Mike’ Pedroso, proprietor of Mike Pedroso Farms, behind his involvement in agriculture.

Prior to farming, he worked as an assistant chemist and moved to various positions in the manufacturing industry for over 14 years. It was in 1999 when Pedroso decided to stop climbing the corporate ladder, to apply for early retirement, and to pursue farming instead.

Pedroso and his wife, Luz, were so occupied with their jobs that most of the food they consumed was from restaurants. Having realized how unhealthy this lifestyle was, they opted to grow their own food instead.

The farm was established after Pedroso’s early retirement. “What better legacy to leave behind than planting a tree that will provide shade and food for my children and grandchildren,” Pedroso said. He believes that all these experiences led him to where he is now.

Home to the sweetest jackfruit variety

In 2017, Mike Pedroso Farms got an organic certification from Negros Island Certification Services (NICERT). The farm is situated in Calbayog City, Samar with a total land area of 3.7 hectares that is divided into three: two hectares for a jackfruit orchard, 1.2 hectares for the rice field, and the remaining 1.2 hectares devoted to the plant nursery, vegetables, and other crops. 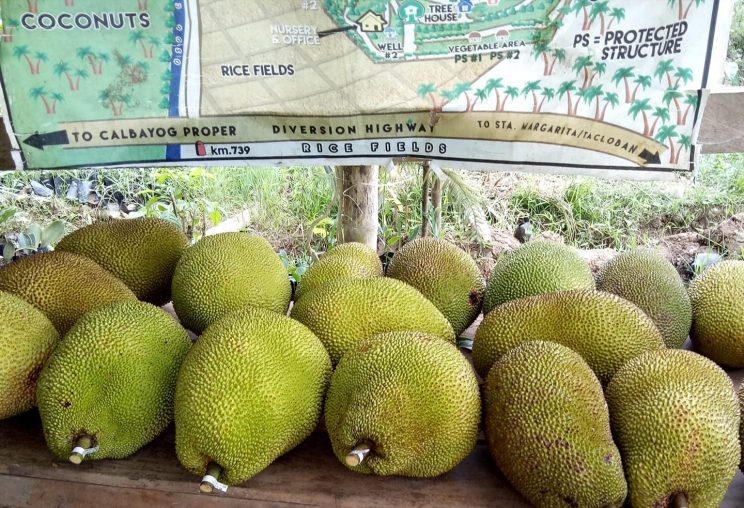 They mainly grow jackfruit (Artocarpus heterophyllus), particularly the EVIARC (Eastern Visayas Integrated Agricultural Research Center) variety that is considered the sweetest jackfruit in the world with the sweetness of 25.1 degrees Brix (the measurement for the sugar content of a fruit). Rice, calamansi, banana, pineapple, coconut, bamboo, seasonal vegetables, root crops like ube, cassava, and gabi are other crops that they produce on-site.

The majority of the products are sold to regular customers around the municipality. Jackfruit (P30 per kilo), depulped and deseeded jackfruit (P100 per kilo), and preserved jackfruit (P100 per 325g bottle) can be purchased on the farm. Aside from these, they also offer crops like legumes, banana and pineapple suckers, and seedlings of ornamental plants, herbs, spices, and fruit-bearing trees including grafted EVIARC jackfruit, calamansi, cacao, rambutan, durian, avocado, marang, and batuan. Training and farm development services are also available. Pedrosa aims to develop more value-added products.

The farm harvests are both for commercial and personal use – 70 percent of them are for retail while 30 percent are for personal consumption. Pedroso’s Farm is home to several chickens, 13 female goats, and two native pigs. They supply these animals with daily nourishment through their forage garden where they obtain assorted legumes and grasses. As of today, animals are only reared for their own gain. They are planning to upgrade their animal production to be able to reach the commercial level.

All these farm elements allow them to generate a monthly income of P50,000 and save about P5,000 in terms of their monthly food costs. These also support the salary and benefits of three regular employees and some seasonal workers.

Triumphs and troubles in farming

To date, irrigation is one of the challenges they face on the farm. Pedroso explained: “Since the orchard is hilly, I have established contour lines to reduce runoff and channeling of water during rains. The contours allow water to spread over the orchard.” Their next project is the installment of solar power and water impounding ponds on the farm.

In growing jackfruit, Pedrosa suggests buying healthy seedlings from reliable sources. To read the latest news on jackfruit production and to gather information and ideas from experienced jackfruit growers are his recommendations in growing them.

Many people have been dreaming of retiring on a farm just like him. Now at 65, farming, for Pedroso, remains to be a source of joy, nutritious food, and a secure life.