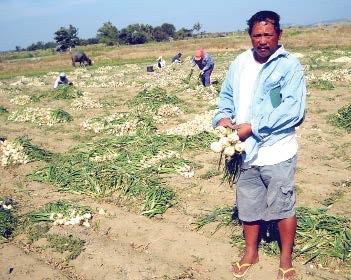 For 20 years, Danilo Manuel has been an onion farmer in his hometown of Bongabon, Nueva Ecija, the recognized “onion capital” of the Philippines. As a veteran in growing onions, Manuel has learned to not depend too much on producing the aromatic and flavorful vegetable in the regular season because the high supply results in low farmgate prices.

Several seasons ago, Manuel began growing onion in the off-season, usually sowing seeds in October in the Bongabon Barangay Tugatog field that his family owns. He began doing this after being encouraged by market development technicians of Allied Botanical Corporation (ABC), who guide farmers in adopting new technologies for vegetable production, especially when it comes to choosing hybrid varieties to plant.

ABC has strongly encouraged and assisted farmers in the country’s onion-growing areas to plant the crop in September and October to assure them of good profits from these during the high-demand period from November to January. 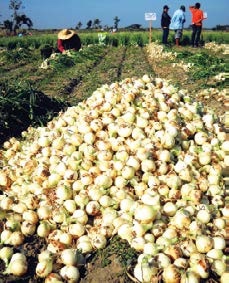 A pile of Rio Bravo bulbs waiting to be packed into onion sacks.

Nunhems, ABC’s supplier of hybrid onion varieties from the Netherlands, supports it in encouraging onion farmers to plant hybrid varieties. A 96-year-old company, Nunhems is one of the world’s four leading seed companies. It markets more than 2,500 seed varieties of 28 vegetable crops, and is present in over 40 countries worldwide. As its exclusive distributor in the Philippines of hybrid onion seeds, ABC began marketing an F1 variety of the Dutch firm in late 1994.

As recommended by ABC fieldmen, Manuel, a former farmer-cooperator of the firm for trial plantings and techno-demos, has been planting Rio Bravo in the off-season because it’s an improved hybrid variety that matures one week earlier than other Granex cultivars, making it the most suitable for the so-called palusot crops (planted as a source of food or additional income). Its large, strawcolored, sweet bulbs have a refined neck or stem and a small root plate. ABC first introduced it to farmers in the 2009-2010 season as the best hybrid yellow onion to grow, and many onion growers in Nueva Ecija and Pangasinan have proved the company right about Rio Bravo.

As a result, Rio Bravo F1 has become the dominant yellow onion planted by farmers, especially in Nueva Ecija, the country’s top onionproducing province, which accounts for more than 50 percent of the nation’s total onion output. With Rio Bravo Nueva Ecija farmers attaining yields of 25 metric tons per hectare, there are seasons when the growers plant more yellow onion than the red varieties because the former can command higher prices.

Nueva Ecija farmers sow Rio Bravo seeds in beds close to their water sources so they will not have any problem keeping the seedbeds constantly moist before and after germination. They sow the seeds at a five-centimeter (cm) by 5-cm spacing on the seedbed. To protect their crop from diseases, they spray the young plants with two scoops of Nordox 50 WP copper fungicide in 16 liters of water once every two weeks. Nordox, which ABC also exclusively distributes, prevents Anthracnose and Purple Blotch, major diseases of onion, from infecting the crop. 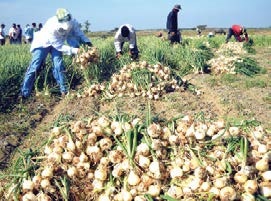 Harvester pull the onion plants from the plots and leave them in the sun
before cutting off the leaves.

The farmers transplant the seedlings 30-40 days after sowing, planting the young
plants 5 cm apart between holes and 5 cm between rows on prepared plots.

Bulbs begin to develop after the Rio Bravo plants have formed seven to nine leaves. To enhance the growth of big, vigorous bulbs, ABC technicians recommend that the growers drench their plants with five scoops of Peters Blossom Booster (9-45-15) in 16 liters of water, repeating this at 10-day intervals in addition to their applications of granular fertilizers. When the plants have formed 13 to 18 leaves, five scoops of Peters Yield Booster (15-10-30) in 16 liters of water is the recommended supplemental fertilization.

To save on time and give his crop more chances to survive inclement weather and strong rains, Manuel does not start his plants in seedbeds and later transplant them in the growing plots. Instead, he adopted the practice of Pangasinan farmers who broadcast onion seeds directly on their growing beds but with two innovations.

Compared to the meter-wide plots on which Pangasinan farmers directly sow onion seeds, Manuel had his workers build up 30 cm wide and 20 cm high beds with 15 cm deep depressions between them, using hand tractors after the initial plowing-harrowing by a large tractor. The ditches between each plot are for preventing waterlogging. Then, in sowing, the workers used special onion seeders that dropped the seeds in double rows on the plots. They direct-seeded a 1.3-hectare (ha) area of the more than two ha field that Manuel’s family owns in Tugatog. 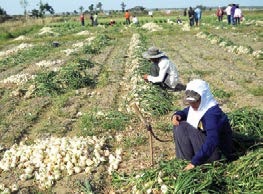 The harvesters cut off the leaves at a fast pace using improvised
cutting contraptions. They have to work fast because they get paid by the amount of bulbs they bring in.

“Our plants should always be wellwatered during their bulb development stage, but we did not have to irrigate our field because of the rains from the time as we sowed seeds up to most of December,” said Manuel. “In fact, we were worried that the rains would not stop because at 10 days before harvest, the plants should no longer be watered or else their bulbs will begin to rot. At that stage, you risk losing the entire crop if there’s heavy rain.”

He fertilized the crop four times. The first application was of two bags of 16-20-0 and one of potash 15 days after sowing. The two sidedressings were of one bag of urea and two of 14-14-14. Afterwards he top-dressed with three bags of 14-14-14.

He asked his barangay mates to harvest the Rio Bravo 89 days after his workers sowed the seeds. In Bongabon, everyone, even children, knows how to work in the onion fields from transplanting to weeding to harvesting the bulbs.

About 50 harvesters, mostly women, came to Manuel’s field and pulled the plants from the ground then left these in the morning sun to allow the bulbs’ necks to cure before the leaves were cut off. “Cutting at the necks immediately after pulling out the plants will enable harmful organisms to enter the bulbs through the fresh stem,” said Manuel. “That will cause the bulbs to deteriorate, and will considerably shorten their shelf life.”

After cutting off the leaves, some harvesters piled the bulbs on the ground while others put them in the standard onion net sacks. The total harvest went into 822 sacks that weighed from 28 to 30 kilograms each. Manuel thus harvested a little less than 24 metric tons from the 1.3 ha he planted. A ready buyer bought the bulbs to Metro Manila.

More than 9,400 farmers in C.Visayas received 1st release of cash, food subsidy for 2021

How to make compost