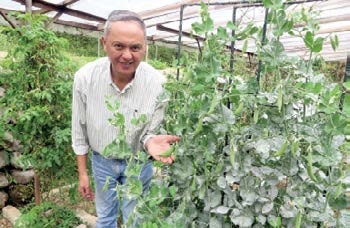 Would you believe that one can live a comfortable life with the necessary amenities by just farming 3,000 square meters?

That might be hard to believe but the 3,000 square meters is what has been providing Pat Acosta enough income to support a family, including three children who have gone to college.

Pat Acosta was the Gawad Saka Organic Farmer of the Year 2010 for his outstanding achievement in farming without using any chemicals. His farm is on a hillside in Brgy. Puguis in La Trinidad, Benguet. The slope is such that he had to terrace the place with seven levels, using each level for growing his salad vegetables. In a portion of the second to the highest level, he built his two-storey house following the design of a Japanese architect friend. 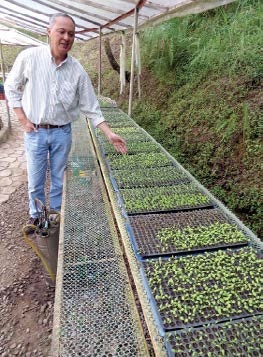 Pat and his seedlings in plastic sowing trays.

Pat calls his farm “The Master’s Garden,” probably because he claims that practically everything that he uses in his brand of farming is God-given. He says he only buys the seeds and the plastic trays for growing his seedlings. He uses no chemicals to protect his plants from insects and diseases. Neither does he use any chemical fertilizer to make his plants grow.

Would you believe that his lettuce and other crops are practically free of diseases and insect pests? Pat claims he just follows the law of nature. Although he majored in horticulture at UP Los Baños where his professors might have taught them to use chemical fertilizers and pesticides in producing their crops, he uses none of those.

Pat, by the way, produces salad vegetables like different varieties of lettuce, snap peas, cherry radish, and Japanese cucumber. And since these are not usually cooked, it is just appropriate that he grows them sans poisonous chemicals.

So what does he do to produce his chemical-free crops? He reiterates that he follows the law of nature. He uses compost, but not the traditional compost you and I know. Well-processed compost is not for him. Why? Because such compost is easily used up by the plants, so you probably have to apply it two or more times up to harvest time. He uses compost that is not fully decomposed.

He explains that in the forest, there is organic matter that is fully decomposed, and there are others undergoing decomposition. Thus, the supply of nutrients is continuous. That’s the principle he applies in his farming. When he plants his lettuce, he incorporates in the soil his not so well-decomposed compost. The same could also be used as mulch, which will decompose gradually, providing his plants with a continuous supply of nutrients.

He has a practical way of producing his compost with the aid of IMO or indigenous microorganisms. All he does is to take a spoonful of soil from the forest, to which he adds a spoonful of brown sugar plus one liter of water. He places this in an open container, and he lets this stand under a roof for three days. After three days, he mixes this with 16 liters of water, which he then sprays on the shredded compost materials. He just lets the materials stand under the roof without any covering. After two weeks, he can already use the same in his garden. 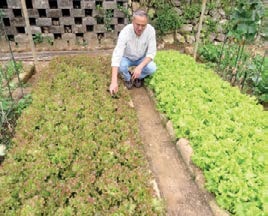 Pat produces seven varieties of lettuce for his customers.

Headmitsthatthe composted grasses don’t contain all the necessary elements needed for the proper growth of plants, but he has a remedy for that. He adds seaweeds to his composting materials at the rate of about 10 percent by volume. This provides a more or less complete food for his plants.

Pat bought his hillside property in 1993. It took him several years to fully develop the place into what it is today. From the very beginning, he decided to go organic, and he has kept to that decision.

From flowers to food crops

At first, he grew ornamentals and flowering plants. But after the financial crisis of 1997, he decided in 2000 to produce food crops, particularly salad vegetables. He admits it was not easy to sell his salad vegetables in the beginning because not many Filipinos were eating salads then. When he brought his harvest to trading post (bagsakan), they would offer him very low prices, so he ended up giving away his lettuce and other leafy greens to people who cared to try his produce. He was happier giving his harvest away than selling the same at a very low price.

He gives way to newcomers

By 2001, though, he had enough buyers of his salad vegetables and today has established a simple system of marketing his harvests. He no longer sells any of his harvests in La Trinidad. He says he wants to give way to new organic players so that they can develop their own market there. After all, he can sell all that he can produce to a Manila distributor. He sells his lettuce and other veggies at P100 per kilo throughout the year, whether the supply in the market is plentiful or scarce.

Twice a week, Pat sends to Manila 50 to 60 kilos of veggies, mostly lettuce plus smaller amounts of cherry radish, Japanese cucumber, cherry tomatoes, sugar beet, and arugula. He sends his products through a bus company every Tuesday and Friday. His buyer just picks up the cargo at the bus station and distributes them to different outlets. It’s that simple. 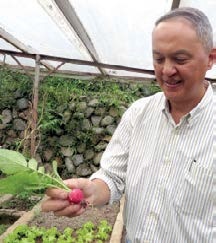 Pat makes at least P10,000 to P12,000 a week from his deliveries. His lettuce fetches P100 per kilo, a price he maintains throughout the year. His other salad veggies are priced differently. For instance, Sugar Snap Pea sells for P250 a kilo; Japanese cucumber and cherry tomato, P120 per kilo; arugula, P400 per kilo; cherry radish and salad pechay, P80 per kilo.

Pat’s weekly income is more than enough to keep body and soul practically problem-free. After all, he has only two workers, whom he calls his partners, and they are paid well. They receive their basic pay that is more than the minimum wage, and if sales for the month exceeds their basic target of P25,000, their daily pay could be doubled. His two partners are Romuel Evangelista and Rodel Buyan.

Pat explains that he and his two workers can do all the chores they have to do to produce the vegetables for their particular market. He limits his workers because managing too many workers can be challenging. His two workers like it that way because the incentives will all be theirs.

Pat derives extra income from other sources. He conducts seminars on organic farming for a fee. He does not hide any secrets. He teaches participants everything that he does in his small but profitable farm. If it is a simple farm tour and a lecture, he charges just P50 per person.

There is also a two-day training program for which Pat is paid P1,000 per day per person. Included in the training package is the food. In the two-day program, he teaches his system of composting including preparation of IMO, seed setting, transplanting, nursery management, and ground or field planting.

Pat has also modules for 7- and 14-days of lectures and hands-on training. These cover a lot of the practical techniques in developing an organic farm, including developing a market for their produce. The charge is also P1,000 per day including the food. Among those who go for intensive training are OFWs who are scheduled to work in organic farms abroad. Some of them had ready jobs in organic farms in Europe and Canada.

In his lectures, Pat says, he teaches the simplest techniques. He wants the practitioners to learn to depend on the raw materials that are found around the farm. By keeping the techniques simple, there is no reason a farmer would not adopt them.

He says that the secret in organic farming is to keep the soil healthy. The soil should be fed with a variety of plant materials. The farmer should convert every biomass available in the farm into compost, enriching the same with seaweeds.

Well, do you now believe that even a sloping 3,000 square meter property can be a source of income to sustain a comfortable and healthy lifestyle? Better visit Pat Acosta one of these days. He can be contacted at 0942-825-8499.