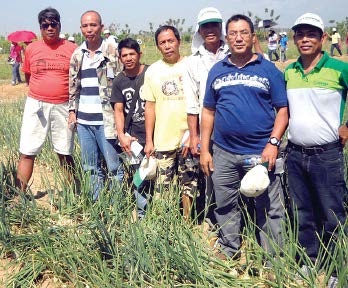 A few years ago, farmers in Pangasinan province’s Alcala town began thinking of producing more yellow onions to supply the country’s most popular local fast-food chain through a marketing tie-up. The goal of the farmers was to acquire more know-how on growing yellow onions so as to be able to satisfy the requisites set by the food firm for quality produce. One of the leading onion-growing areas of the province—the others being Bayambang and Bautista towns and Villasis’ southern part—Alcala has helped make Pangasinan one of the country’s top five onion producing provinces at present.

“To be able to achieve a concerted effort in undertaking increased production of high-quality yellow onions, and also be able to get the needed support from the government and private companies, we formed the Alcala Onion Growers’ Association,” says Romulo Bacolor, the association’s chairman. “We have 17 members now who till an aggregate area of a little over 10 hectares of land. More farmers have signified their intention to join us.”

As most of the group’s members are neophyte yellow onion planters, the association provided a technology demonstration site where the technicians of private seed companies could impart their technologies on yellow onion culture to the farmers. The hands-on techno-training site is a one-fourth hectare field in association member Amado de Leon’s 1.5-hectare farm at Barangay Canarvacanan. 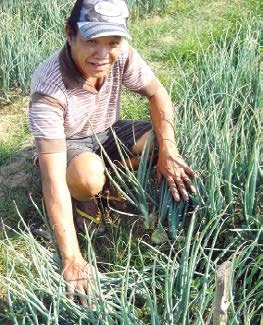 Three companies marketing vegetable seeds supported the techno-demo project by donating yellow onion seeds and having their technicians guide the farmers in the culture of the flavorful vegetable crop. In the initial trial planting at the site, the farmers grew six yellow onion varieties for possible
supplying the fast-food chain’s needs.

One of the seed companies, Allied Botanical Corporation (ABC)—which celebrates its 30th anniversary in 2014—helped the farmers plant three varieties of hybrid yellow onions from its supplier of hybrid onion varieties from the Netherlands, Nunhems. These varieties were chosen because they produce higher-quality bulbs than open-pollinated ones:

One of the three varieties planted at the Brgy. Canarvacanan techno-demo site is Rio Bravo F1, an improved hybrid variety that matures one week earlier than other Granex cultivars. Rio Bravo’s large, straw-colored, sweet bulbs have a refined neck or stem and a small root plate. ABC first introduced it to farmers in the 2009-2010 season as the best hybrid yellow onion to grow, and many onion growers in Nueva Ecija and Pangasinan continue to prove the company right about Rio Bravo.

As a result, Rio Bravo F1 has become the dominant yellow onion variety planted by farmers, especially in Nueva Ecija, the country’s top onion-producing province, which accounts for more than 50 percent of the nation’s total onion output. With Rio Bravo, Nueva Ecija farmers attain yields of 25 metric tons per hectare. There are seasons when the growers plant more yellow onion than the red varieties because the former sometimes commands higher farmgate prices.

With the support of Nunhems, ABC strongly encourages and assists farmers in the country’s onion-growing areas to plant hybrid varieties of the crop in September and October to assure them of good profits from it during its high-demand period from November to January. The company advises farmers who want to produce yellow onions to plant Rio Bravo F1 because it matures earlier than other varieties. In Pangasinan in January 2014, yellow onion farmgate prices were as high as P65 per kilogram.

Aside from Rio Bravo, the Alcala farmers tried two yellow onion varieties that ABC is still in the process of thoroughly testing for their suitability for profitable growing in Luzon before making it fully available for commercial planting. The farmers planted the six varieties at about the same time in November, directly sowing the seeds on meter-wide plots, as is the regular practice of onion farmers in Pangasinan who broadcast onion seeds directly on their growing beds instead of sowing on seedbeds and later transplanting seedlings like the Nueva Ecija growers. ABC agronomist Rich Tuazon was one of the technicians supervising the farmers. 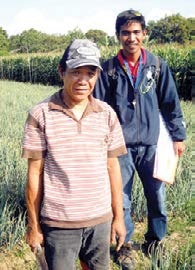 The technicians advised the farmers to water the plants well during their bulb-development stage, except during rainy days. They fertilized the crop with 14-14-14 15 days after sowing and side-dressed with urea three times after that.

The trial crops had a problem with the January weather, which was characterized by a cold front brought about by the northeast monsoon. The tops of the growing onion plants, which were still in their vegetative stage, were infected by a fungus brought about by prolonged wetness from morning dew. The first symptoms of the disease that the farmers saw were small whitish spots on the leaves that turned into lesions surrounded by a band of purple tissue. The lesions expanded rapidly up and down the leaves until these turned totally whitish-yellow.

“The disease developed fast,” says De Leon, who is only in his second season of growing yellow onion. “It took only a week to infect all the yellow onions that we had planted—all except the three varieties from Allied Botanical. All the plants in the infected plots developed very small bulbs that we cannot sell.”

Arturo Bernardo, an ABC onion technologist who came to Canarvacanan, is a 15-year company veteran who hails from Nueva Ecija and told the farmers that Purple Blotch Disease had infected their field. He said the infection spread fast because the lesions on the leaves produced spores of the fungus that the wind quickly dispersed to other plants as the morning dew dried up. According to Bernardo, the Nunhems cultivars were not affected because the Dutch breeding company sees to it that its hybrid onion varieties
are highly resistant to diseases.

Bernardo advised the farmers that if they did not plant vigorous varieties like those of Nunhems, they must resort to crop rotation by not planting onions in their fields for two to three seasons to eliminate the disease. Other ways for reducing or preventing the development of the disease are correct plant spacing and repeated applications of a fungicide like Nordox Organic Copper Fungicide. Correct plant spacing means that the broadcast method of seed sowing adopted by onion farmers in Pangasinan may be disadvantageous when it comes to disease prevention. On the other hand, a good time to apply Nordox is when transplanting seedlings, which they do not practice.

So that the farmers could learn more about yellow onion culture with superior cultivars, Bernardo invited the members of the association to the annual ABC Field Day and Open House at its Research and Breeding Farm in Tayug town about an hour away by motor vehicle from Alcala. There, the farmers saw how the company grew more than a dozen onion varieties, especially the hybrid ones from Nunhems.

Chairman Bacolor and six members of the association were at the Field Day from midmorning to lunchtime. Bernardo and other ABC Technical Services personnel gave them pointers on Nunhem’s onion varieties and the production technologies for them, especially for yellow onions that the farmers aimed to produce for their marketing tie-up with the big fast-food firm.