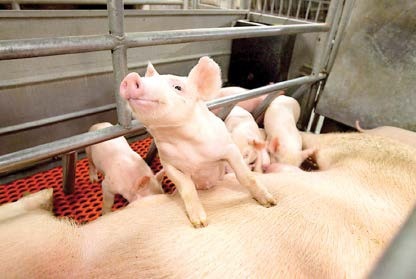 When piglets are born, they need a certain set of skills to be able to thrive. Good coordination and quick reflexes help piglets avoid being accidentally crushed by their mother, which is a primary cause of piglet preweaning mortality.

As the number of piglets born in a litter increases, producers have seen a reduction in piglet birth weight and a rise in the death rate. An estimated 5 to 10 percent of piglets are stillborn, and another 10 to 20 percent do not survive to weaning. The key to solving some of these inefficiencies in swine production may lie within the piglet’s brain.

At the Agricultural Research Service’s Roman L. Hruska U.S. Meat Animal Research Center in Clay Center, Nebraska, scientists have shown that in low-birth-weight piglets, the brain is closer to normal size than other vital organs, suggesting its importance in survival. They’re now investigating other aspects of brain development that may also affect survival.

A team led by Jeffrey Vallet, physiologist and research leader of the center’s Reproduction Research Unit, is looking at the production of myelin—an insulating layer that forms around the nerves and is essential for proper functioning of the nervous system. In addition, the group, which includes physiologists Jeremy Miles and Lea Rempel, is examining supplements like create to determine the effects on stillbirth, preweaning survival, and myelin production.

Myelin has broad effects on the coordination of movement and the speed of reflexes, which allows animals to move quickly and easily. Therefore, production of myelin—“myelination”—might affect the piglets’ ability to stay alive. 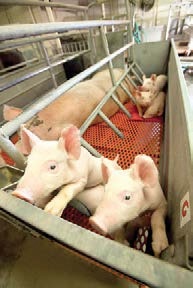 Piglets need to be able to move quickly to avoid
dangerous situations in their environment. Myelin
formation affects the coordination of movement and
speed of reflexes that allow animals to move quickly and easily. (Photo by Stephen Ausmus)

“For example, when humans are born, their brains are not very well myelinated,” Vallet says. “Babies can’t control their arms and legs at first, but movements and other responses become steadier as they grow older.”

On the other hand, when piglets are born, most of their myelin production has already taken place, he adds. “Newborn piglets need to be able to get up, move, and do everything they can to stay away from dangerous situations in their environment, or they’re not going to survive very long.”

A previous study showed that the brains of low birth-weight piglets were undermyelinated, Vallet says. However, this work was not specific to myelin. It measured cholesterol—a major component of myelin but also a component of other parts of the brain.

Vallet and colleagues measured proteins and phospholipids that are basic components of myelin. They compared myelin content from three specific regions—the cerebellum, brain stem, and spinal cord—between the largest and smallest pig fetuses during the sow’s late pregnancy. The cerebellum controls coordination, while the brain stem and spinal cord are involved in reflexes.

The most significant difference was discovered in the brain stem, where myelination was less in the smaller pig fetuses. An examination of the cerebellum showed similar results. Together, these findings suggest that reduced myelin may contribute to poor survival of low-birth-weight piglets.

“There are a lot of reasons why low-birth-weight pigs don’t do very well,” Vallet says. “This might be one factor we can improve on if we could figure out a way to reduce myelin deficiency.”

A dose of creatine

Other research has shown that certain essential fats must come from the diet and that myelin’s proteins interact with zinc as part of myelin formation. This suggested that essential fats or zinc might improve myelination. In a subsequent study, funded by the National Pork Board, Vallet added omega-3 fatty acids and zinc to the diets of pigs, but he found that neither supplement had an effect on myelination.

Scientists then looked at creatine, a compound found in muscle tissue. Creatine plays a significant role in energy metabolism, which has been shown to have a major effect on the survival of newborn piglets until they’re weaned. Creatine is involved in maintaining energy supplies for muscle contraction and is used to improve the performance of human athletes during strenuous, highly repetitive activities.

“Studies show that the birth process, stillbirth, and preweaning mortality are related, but few strategies or treatments are available to reduce delays in the birth process,” Vallet says. “We thought that creatine might affect both the birth process of the sow and energy metabolism in the piglet as well as myelination.”

Pigs received either 20 grams of creatine or no treatment from day 110 of pregnancy until they gave birth. Video cameras were used to monitor the birth process—recording the amount of time between the births of piglets, the number of stillbirths, and preweaning mortality. A subset of piglets was measured for changes in brain myelination to determine whether creatine intake by the mother altered myelination in her piglets.

“Although the birth process was not affected by creatine, the number of low-birth-weight
piglets crushed by their mother was reduced,” Vallet says. “Also, the amounts of several phospholipids in myelin were increased by creatine treatment, particularly in the brain stem, suggesting that improved myelination may contribute to the ability of the piglet to avoid the sow when necessary.”

(Reprinted from the February 2014 issue of Agricultural Research magazine)

Suitable for all ages: Gardening is not just meant for ‘titos’ or ‘titas’

Seven fruits that are safe for diabetics