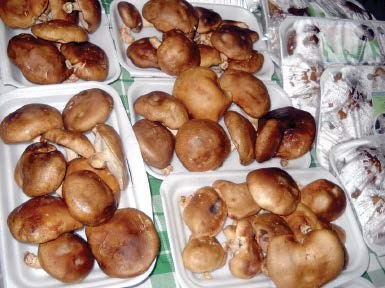 Fresh Shiitake mushroom are sold at P50 per pack in Nueva Vizcaya.

Unknown to many, the province of Nueva Vizcaya is fast becoming a major producer of high-value shiitake mushrooms (Lentinula edodes), which backyard mushroom growers in the province have shown a growing preference for over the past couple of years due to its health benefits.

Shiitake is one of the most valuable edible mushrooms in terms of nutritional value and flavor. Generally low in fat and calories, it is rich in protein, containing 18 types of amino acids including 7 of the 8 essential amino acids in a ratio similar to the ideal protein for humans. Shiitake also contains 30 enzymes and significant quantities of B vitamins and minerals.

It is claimed that the consumption of shiitake lowers blood cholesterol, prevents cancer, strengthens body resistance, prevents adult-onset diabetes, boosts sexual potency, and helps combat cardiovascular and other cerebral circulatory diseases, among others. In addition, the mushrooms are grown sans chemical inputs, making it a totally clean and healthful food for humans.

What attracts farmers to engage in shiitake farming is the promising market potential of this edible fungus, which fetches a year-round minimum farmgate price of P200 per kilogram (kg) in Nueva Vizcaya, using the low-input farming method.

According to Dr. Emily Soriano of the Central Luzon Integrated Agricultural Research Center, the Philippines imports ninety percent of its mushroom requirements from other countries. This is equivalent to 150 tons of mushroom imports yearly. She said that if the local production of mushrooms is optimized, the need to import mushrooms will not be an issue anymore.

“Species of imported mushrooms can all be grown in the Philippines. Temperate varieties can be grown in an artificial environment,” she said during one of the seminar series conducted by the Bureau of Agricultural Research. 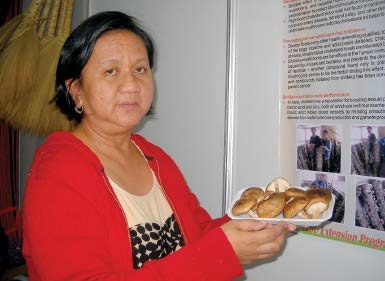 Unlike other mushroom species that grow in cultured media, shiitake grows on hardwood substrate, which can be in the form of logs or sawdust, as this fungus derives its food from nutrients in the decaying wood. Nueva Vizcaya’s climatic condition is favorable for growing shiitake; according to Bacena, it requires a growing temperature of 17 to 27 degrees Celsius for optimum growth.

Bacena has perfected the local production of shiitake using the wood of the nitrogen-fixing Alder tree (Alnus sp.), commonly called Alnus. She claims this is the best growing medium for shiitake under Nueva Vizcaya’s conditions. Bacena said that its characteristics are almost similar to those of the Japanese oak tree used for growing shiitake in Japan, adding that Alnus wood is economical to use as it can be replaced after every three years of usage.

The viability of Alnus as a good substrate for growing shiitake was validated by a 2012 study funded by the Philippine Council for Agriculture, Aquatic and Natural Resources Research and Development (PCAARD). Dr. Bernard Tadawan, a mushroom expert from Benguet State University, found that chipped Alnus wood mixed with sawdust, rice bran, and lime, then placed in black plastic bags, produced good quality shiitake in a short period of time, resulting in high returns and yields, and biological efficiency.

Bacena said that using Alnus wood for shiitake growing does not require that the whole tree be cut as only the mature branches taken from the mother tree will be used.
Nevertheless, she encourages growers to plant Alnus trees to help address the demand for this species for shiitake production in the coming years.

Her recommendation is that logs 1.2 to 1.5 meters long with a diameter of about 5 inches be used for growing shiitake.

The cut logs, which have to be air-dried first for three weeks before use as a shiitake medium, should be clean especially at both ends to prevent contamination with Trichoderma, which Decena cites as one of the enemies of mushroom. It is recommended to drill holes 1-centimeter (cm) wide and 2-cm deep at 15-cm apart from one another on the surface of the logs. These holes are where the shiitake spawn will be planted/inoculated. 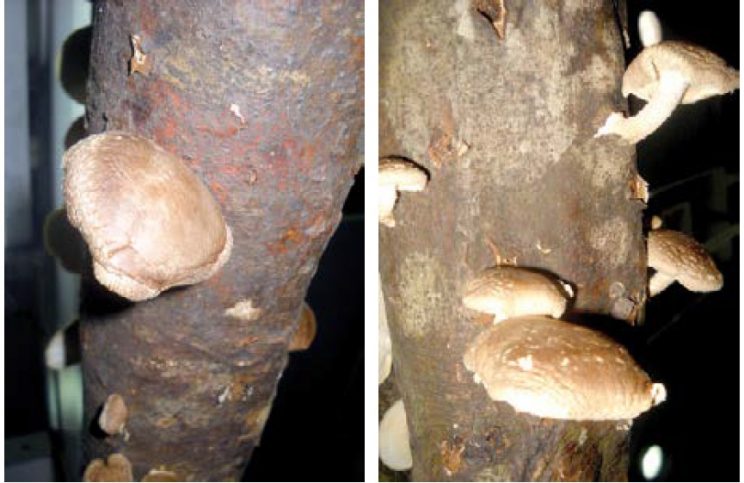 Shiitake mushrooms can be grown on Alnus logs, just like what mushroom growers in Nueva Vizcaya are doing.

Using a funnel, plant at least 1 gram (g) of Shiitake spawn in every hole, then seal with hot wax as soon as possible to prevent drying and contamination.

When using candle wax as cover for the planted holes, Bacena recommends boiling the candle until it melts and produces smoke. This indicates that the candle wax is ready for use as a seal for the holes. Nueva Viscaya mushroom growers do the planting of shiitake spawn in November.

The planted Alnus logs are then piled under a forest shed in a prone position for two weeks. Bacena said that the logs are positioned at a knee-level high for easy disinfection from Trichoderma using an alcohol spray or by brushing with water.

To encourage the growth of mycelia, the logs are replied in a square or pyramid shape for the next two months. This arrangement, which is observed through proper distancing, also promotes proper ventilation and allows easy watering and disinfection. To do this, stack the logs to form a square or a triangle on the ground and then cross-stack the logs one over the other following the formation of the base. Maintain a 1-meter distance between piles.

For another two months, repile the logs caterpillar-style (putting them in slanting positions adjacent to each other). Bacena said that the purpose of this is to speed up mycelial growth with the help of gravity and to allow for easy maintenance and watering during the dry season.

When the wood media are four-and-a-half months old, invert the caterpillar-style arrangement to complete the growth of the mycelia in preparation for flushing. This is done up to the time that the inoculated logs reach 6 months old.

Aside from ensuring temperatures do not exceed 27 degrees Celsius, another crucial factor during this six-month rearing stage is the maintenance of the moisture content of the logs. The logs must be kept moist enough to retain their vitality and prevent contamination. They should be watered or irrigated when they start to dry using an overhead sprinkler.

For uniform production of mushrooms—an essential quality for meeting the quantity demanded by the market—the wood media should be soaked in cold water for 48 hours,
followed by incubation for 48 hours. Incubation is done with the use of a thick tarp or tulda. Lay the wood branches on a clean and dry surface, then cover them properly with a tarp to increase their temperature; this will stimulate mushroom growth. After logs are removed from soaking, they are placed in an indoor fruiting area where they will begin to dry, which signals the pinning phase of fruiting, or the primordium formation, which is simply called ‘mushroom development’. This is indicated by the appearance of lumps in the holes planted with spawn.

Bacena said that there is no need to water the logs anymore during fruiting as the moisture that it accumulated during the 48-hour soaking is enough to sustain it during the process.

Shiitake mushrooms are ready for harvesting/picking 4 to 5 days after primordium formation, or when the cap is approximately 50 to 70 percent open, which is classified as Class A in the market. The logs will continue to produce mushrooms in the next two weeks. Under favorable conditions, a single log can produce an average of 20 pieces of mushrooms.

As for the economic aspect, Bacena said that a sample computation for a 50-piece log production operation can give a grower a two year net income of P50,078 at a production cost of P3,993, given a P200 farmgate price. On a bigger scale, she said, this can trnslate into a higher income for enterprising growers.

Among the first few farmers who tried their hands at shiitake production are Jaime Gayad and Andres Costing of Barangay Tubungan, Kayapa, Nueva Vizcaya, who established Tingyad Farms. Six years ago, they saw the potential of growing shiitake after attending a seminar conducted by the local office of the Department of Agriculture. Today, they have 200 wood branches for shiitake production in addition to their production of highland vegetables, which they have grown for many years now.

Eight times a week during the two-week fruiting period, Tingyad Farms harvests an average of P2,000 worth of shiitake mushroom from the 200 logs. The mushrooms are sold to local buyers including Viscaya Fresh, a Nueva-Viscaya based organization that markets naturally produced agricultural products of the province, and some regular and walk-in buyers.

Bacena said that some of the growers set aside a portion of their harvests for their own consumption because they believe that including shiitake mushroom in their diet has improved their health.

Likewise, the low-input technology for growing shiitake convinced Jaime and Andres as well as other growers to pursue the production of this mushroom. The materials for shiitake production include Alnus logs, which can be bought at R10 per piece; spawn worth R40 per bottle (4 bottles are good for spawning 50 logs) available at NVSU’s Mushroom Laboratory; a funnel; alcohol; candles; cotton; and a sprinkler. Labor is not a problem as it is readily available in the farm.

As the demand for shiitake increases, Jaime and Andres hope that some concerned agencies can assist small growers like them to maximize the market potential of shiitake and eventually set a standard price that will benefit both producers and traders, especially during lean months. As of this writing, the prevailing selling price for shiitake mushroom in major supermarkets in Metro Manila is not less than P800 per kilogram.