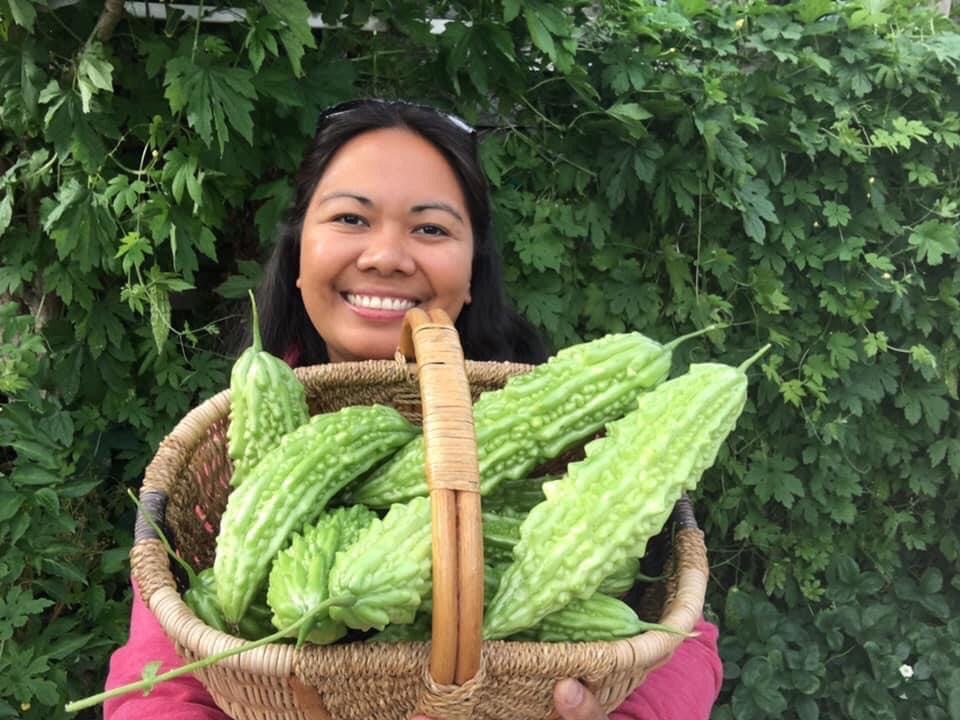 Annalyn Opada-Rampe, a housewife and a part-time sales worker, takes pride in producing Philippine crops despite being away from the country.

Leaving a place that you call home can be difficult, but this doesn’t mean you’ll never find one in a different environment.

Annalyn Opada-Rampe, 40, is a Filipina gardener who found a home in France where she has been living with her German-American husband since 2013. During her early years abroad, Rampe admits missing Philippine vegetables and dishes like pinakbet. Fortunately, her husband’s place has a wide garden space where she can plant various flowers and vegetables. This convinced Rampe to cultivate Philippine veggies in France. 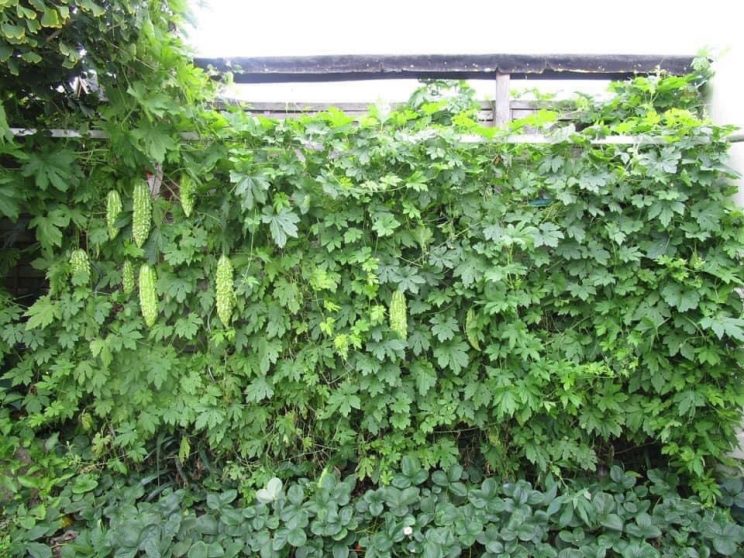 “When one of my Filipina friends gave me an ampalaya, which she bought from an Asian store, I kept the seeds and tried planting them. It was luck that they survived!” During her visits to the Philippines, she took the chance to buy seeds of upo, sitaw, okra, kangkong, patola, chili, eggplant, and alugbati. She brought the seeds to France and planted them during summertime. “I felt happy and satisfied upon seeing them survive, giving us abundant fruits,” Rampe shared. 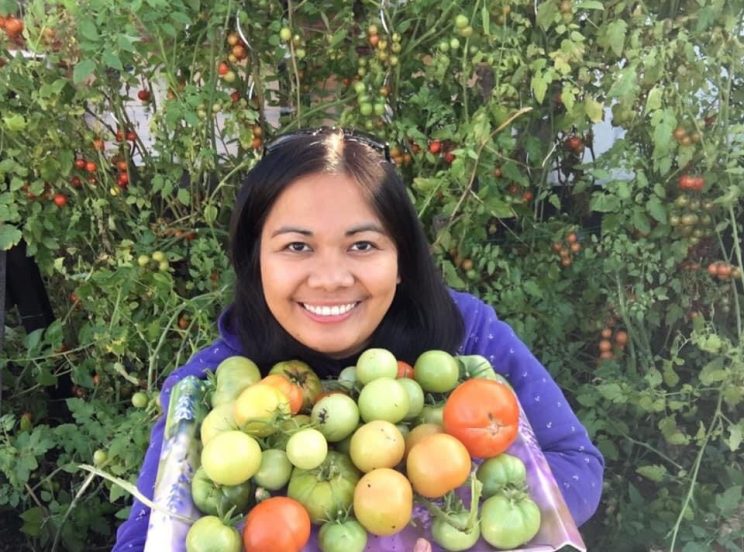 Rampe’s cherry tomato harvests started from a few tomato fruits where she obtained the seeds of her crops from.

Growing up in Davao, Rampe is a witness to her grandparents’ hard work in the field. Knowing how plants grow initiated Rampe’s love and interest in food production. This is something that Rampe still carries today, even though she’s thousands of miles away.

Since 2015, it has been part of her routine every summer to grow Philippine vegetables, including her favorite ampalaya. In almost a 3,000sqm garden, she has planted upo, ampalaya, alugbati, kangkong, patola, kalabasa, eggplant, sitaw,  malunggay, kamote, lemongrass, corn, tomatoes, onions, and a lot of European vegetables and flowers. “I love our Philippine vegetables! They are beyond compare! Honestly, I encountered hardships in growing these vegetables because they are only suited to be planted during summer,” Rampe said.

Summer in their location occurs from mid-June up to August, which according to her, is a limited time to cultivate tropical crops. This is why she usually begins preparing her seedlings by March. She grows them indoors or in their greenhouse to protect the young plants from the cold weather that might cause their death. Despite the unfamiliar location for Philippine veggies, Rampe was able to grow them several times without applying any fertilizer or pesticide. Her secret? good soil and consistent watering.

So far, the only challenge in cultivating them is the weather. She explained, “I can plant them directly to the soil or in the ground in the middle of June. I must be very careful in planting and transplanting them to a warm place, or else they will die.” She harvests the plants from September to October or before the winter starts.

Sharing the fruits with the family

Their home is a little paradise for Rampe. Not only is she able to plant flowers and crops that beautify their place, but it also serves as a relaxation area for them. By producing these crops, Rampe and her husband Raymond can enjoy and consume food that reminds them of the Philippines. Her husband loves eating the vegetables that she grows and ampalaya is his favorite addition to salads and other dishes. Consuming these veggies has also improved his blood pressure. 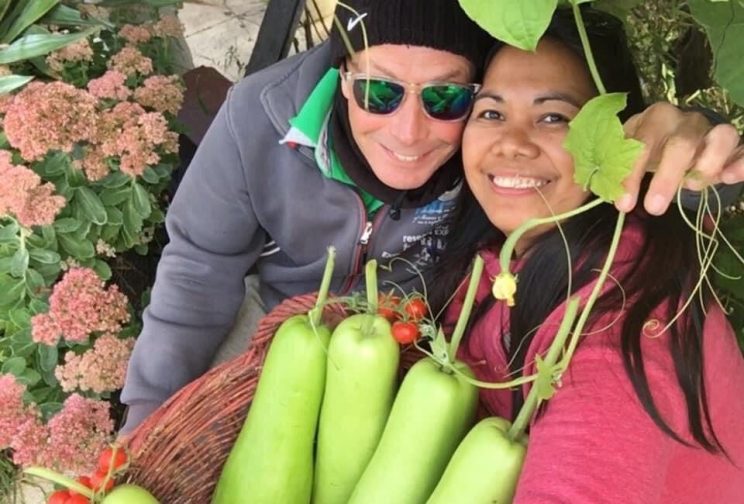 Rampe’s husband Raymond is her number one supporter in her gardening journey.

Due to having abundant harvests, Rampe also shares the vegetables with Filipina friends. “It’s such a nice feeling when I share vegetables that are very hard to find here and [that] can be availed of at a costly price. The happiness of my kababayans (fellow citizens) to have these vegetables is also my happiness. It is really satisfying for me.”

For gardeners who’d want to grow local vegetables in other places around the world, Rampe has shared a few points to consider in growing these crops in a country that’s similar to theirs. 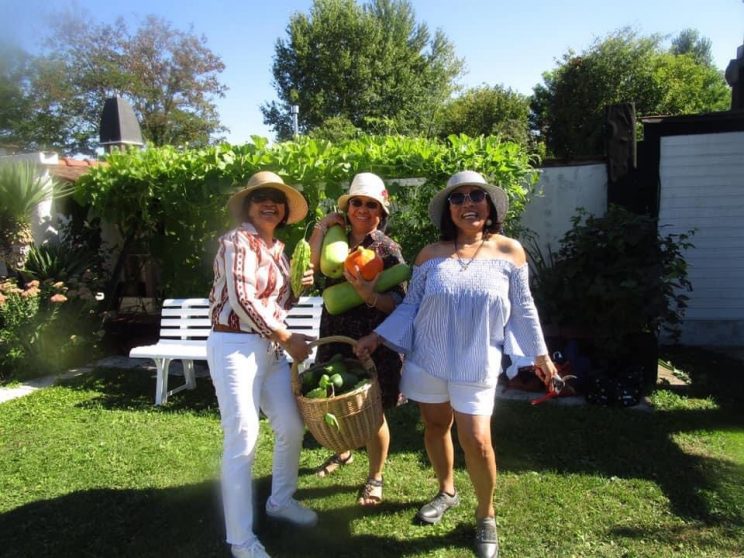 Since they cannot consume all the harvests that Rampe is producing, they happily share them with friends and neighbors.

Firstly, one must love their garden just as they love their home. If they are growing in a place with four seasons, sow seeds a bit early before summer and store them in a greenhouse with a warm climate for them to survive. During summer, water them regularly every morning, but not during when the sun shines the brightest or at noontime. The best time is during sunrise and sunset. Based on her experience, planting two different vegetables in one plot does not produce better yields. Protect the veggies from frost, especially when you feel that the climate is getting cold. Before winter comes, make sure to harvest all the vegetables.

Rampe plans to grow sayote, saluyot, and banana next. By bringing a piece of the motherland to the other side of the world, Rampe and her fellow Filipinos will always remember the taste of home.