Benito and Cirila Travilla started their farm to provide for their family. It later became a profitable fish farm.

Four Jewels Aquafarm is a family aquafarm in Banga, South Cotabato that engages in freshwater fish production. It has also been in the business of caring for livestock and growing fruits, root crops, corn, and rice.

(Read about the farming operations of Four Jewels Aquafarm here.)

It was first established in 1992 by Benito Travillao as a means to sustain his family financially.

Travilla was exposed to farming at the early age of seven. He was already dealing with the mechanics and logic of agriculture, where he found his vision of becoming one of the best agriculturists in the country.

He spent his elementary years at Tacurong Pilot Elementary School in Sultan Kudarat while working as a farm laborer. Every Monday, Travilla spent his time dealing with the demands of his farm routines and goes to school from Tuesday to Thursday. He also sells ice drops on Friday to pay for some of his expenses.

Since he was seven-years-old, Benito Travilla has been exposed to farm work and the fundamentals of agriculture.

Unfortunately, his absences in school forced him to drop his studies for a few years. Travilla would later pursue farming for two years in Mlang, North Cotabato, and continue his schooling at Sangat Elementary School where he graduated valedictorian.

With his outstanding academic achievement, Travilla earned a full scholarship at the Laboratory School, the High School Department of the University of Southern Mindanao (USM) where he continued to hone his skills as a student farmer.

It was also in USM where he met his wife, Cirila, who was his colleague at that time. At present, the couple has four daughters: Cherrel Joy, Mabel, April, and Faye.

After graduating, Travilla was employed as a senior supervisor at JCA Rubber Company. During his time in the company, there was a rebel movement in the area that marked a big twist in his career.

In 1983, the couple was held by the New People’s Army as pawns to be traded for their demands from the JCA Rubber Company. Their experience of such violence, coupled with the non-potable water of Agusan, led to Benito getting sick which made him incapable to continue working for the company.

With almost nothing left after being held captive by the rebels, the couple went to Banga, South Cotabato. They acquired a hut which was just enough to give shelter to the Travilla family. Using their skills in farming, the couple made use of a small land located along the banks of Banga River.

Benito planted stringed beans while his wife delivered their produce to General Santos City and Polomolok. For almost two years, the couple’s love for farming had sustained their lives.

How the farm started

Despite the hardships that the Travillas faced, they persevered and by 1992, their lives began to slowly change.

After the family patriarch recovered from his ailments, he made his way to establish the future of his family. The couple made little investments and acquired 1.5 hectares of land, which they developed.

They started a fishery project with 0.5 hectares of property and worked on it until they acquired another half hectare of land, which was dedicated to agroforestry.

In 1995, fingerling production became a booming industry and resulted in many achievements for the Travilla family. In two years, they were able to build their home without requiring a loan.

Presently, the Travillas own a total of 6.5 hectares and an additional two hectares exclusive to their tilapia hatchery business.

The family also raised several farm animals in El Nonok such as ducks, cows, pigs, and chickens as part of their backyard project. When they entered the tilapia hatchery business, they considered that many of their clients are Muslims from the Maguindanao so to avoid cultural-related issues, they stopped the production of pigs in 2004 and focused more on the expansion of their tilapia hatchery.

Eventually, the family farm was known as Four Jewels Aquafarm as a nod to the four daughters of Benito and Cirila. 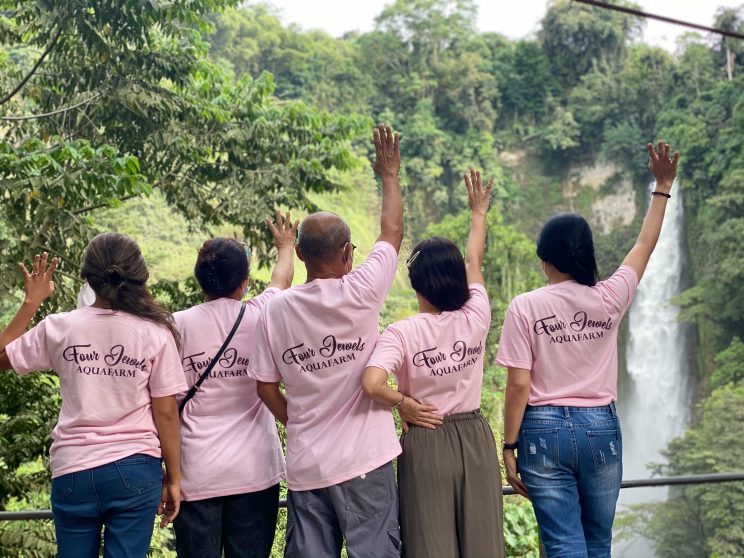 Their farm was later called Four Jewels Aquafarm as a tribute to the four daughters of Benito and Cirila.

Creating jobs for their community

With nearly 30 years in the business, the Travillas’ farms have become a source of livelihood and hope for the families around them as they have given jobs to more than a hundred people.

At present, 11 families are permanently employed on their farms. The Travillas make sure that the families they employ will have security are well provided for.

Besides providing their community with a sense of livelihood, the Travillas’ farming business also supported the education of many bright minds in their community where several of them have already accomplished the course they have taken.

With the right mindset and passion for farming, Benito and Cirila Travilla have found a way to provide for their needs during trying times. And when the opportunity of a niche market presented itself to them, they did not hesitate to make a name for themselves in the fish farming scene of South Cotabato.

The Travillas are one of the many examples of farmers who show how profitable farming can be. Not only were they able to sustain themselves and lead better lives, but they are now also in a position where they can give back to their community so that they too can enjoy life and appreciate agriculture.

Diverse family farm that’s been operating for nearly 30 years engages in profit-sharing with its farmers who earn P30,000 to P60,000 a month