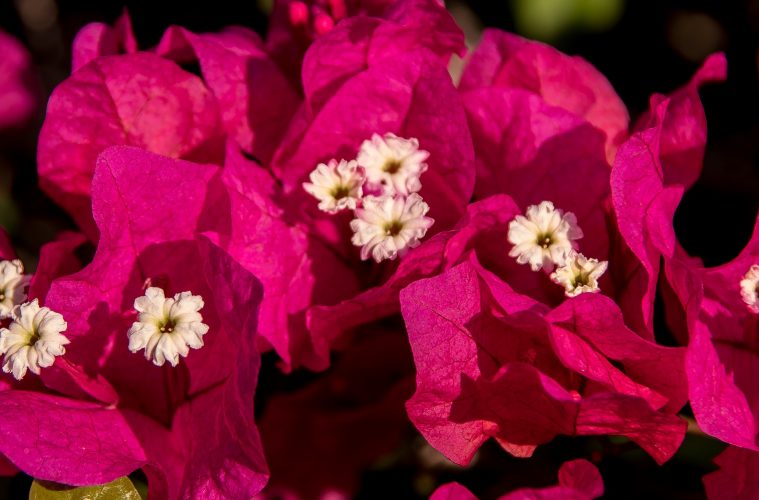 Featured Image by Sandid from Pixabay.

Profitability and beauty: Adding value to bougainvillea through grafting

Bougainvillea is an ornamental plant that is popular because of its vibrant colors and its adaptability to extreme conditions. Its strikingly colorful bracts or foliage are sometimes mistaken for flowers. Bougainvillea is one of the most recognized ornamentals in the Philippines. They usually bloom during most parts of the year, especially during summer.

Aside from being floriferous, this hardy plant is easy to grow and is also tolerant of heat. They grow best in warm climates, and exposure to sunlight makes them grow and bloom faster. They are rarely attacked by pests and diseases, too.

Bougainvilleas, or bougies as growers call them, do not just adorn one’s space, but they can serve as a great source of income, especially when grafted or variegated.

Florinio ‘Nyong’ Lazo, a geologist by profession and bougainvillea grower by passion, shared the process of grafting bougainvilleas. Grafting is an asexual type of plant propagation where you take one vegetative part of a plant and combine it with another plant. It is usually performed by creating wounds in plants and uniting their flesh to continue their growth together.

In grafting bougainvillea, one will need a scion (a part or twig of bougies used to integrate with other varieties to create a new plant) and a bougainvillea rootstock (the plant the scion will be grafted on) where varieties will be merged. The rootstock can either be the ordinary variety or any variety that you would like to change in terms of appearance or color. For the scions or cuttings, you may choose a variety based on the color, variegation, or rarity, said Lazo.

Things you’ll need for grafting include scion or cuttings, rootstock, grafting tape and string for sealing, cutting tools, plastic (preferably the plastic used for iced candy) that will cover the grafted part, and alcohol for the tools.

Make sure all the materials are sanitized to reduce the risk of contamination. To start, prepare the scions by removing the flowers, leaves, and thorns attached to them. Each scion must have at least four to six nodes, depending on the grower’s choice. Using a sharp cutting tool, make a slanting cut (about more than half an inch diagonally) on the scion and the rootstock that will match together when joined. Cut the rootstock near the skin where you will insert the scion because it has a higher chance of contact with the cambium (a tissue layer responsible for the new growth of stems and roots). 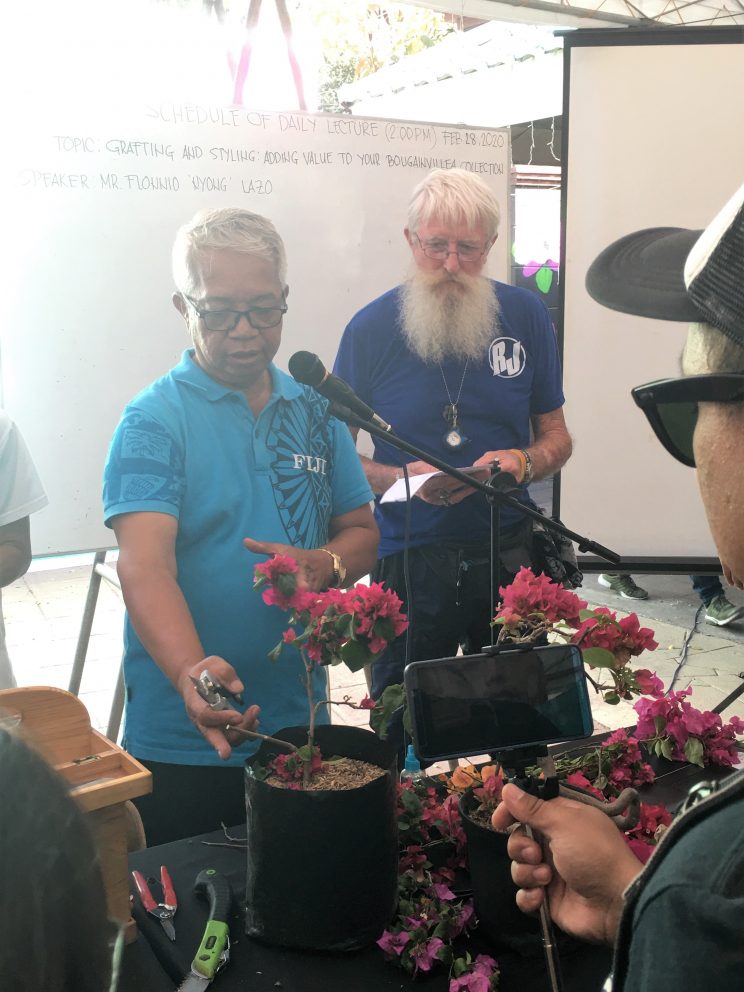 Nyong Lazo demonstrating how to graft a bougainvillea at the Bougainvillea Extravaganza 2020.

Make a wedge at each scion’s base. Then insert the scion into the rootstock as deep as possible. Two to three scions can be inserted in one rootstock cleft. Make sure that the scion’s skin touches the skin or cambium of the rootstock. Keep them intact by securing them with grafting tape. Wrap the fused scion and rootstock with plastic and tie it with a string. The wrapping is important because it preserves the moisture inside and will prevent the scion from drying out.

Isolate the grafted bougies in full shade for four to five days with no watering to prevent rot. Lazo suggests watering the plant a few days before grafting them instead. “You will see signs of life as early as nine days. Some varieties may take longer. You just have to observe it.” If more leaves start to grow after a week or so, untie the string, but leave the plastic as it is just to allow the air and moisture to flow. After three to four days, you can remove the plastic cover. Once you see that the plant is thriving, gradually introduce the pot to a sunnier area until it becomes stable.

Protect the bougainvilleas from animals, pets, strong wind, and heavy rain. Be careful in watering, especially if there are newly grafted scions in your garden. Do not pour water from above to avoid the breakage of its bracts and flowers. Since bougies love dry soil, only water them twice a week.

As per Lazo, you can assess whether grafting is successful or not in two weeks. Grafting must be performed from October to May and not during the monsoon season. Depending on the variety, every bougainvillea blooms according to its own blooming season, so before propagating bougies, growers must first determine if they want to grow them based on the color, flowering habits, or season.

For agripreneurs, especially those with limited space, having grafted bougainvillea plants is an advantage. Grafted ones have a higher value compared to common varieties that occupy the same space in a garden.

Insights shared by Florinio ‘Nyong’ Lazo during the seminar on Grafting and Styling: Adding value to bougainvillea collection at Bougainvillea Extravaganza 2020.