As a product of a farmer, Nilor ‘Nong’ Go, 36, is a witness to farmers’ lives and the stigmas that revolve around them and the industry. Many people think of farming as a lowly profession, but not this millennial.

Coming from a household that relies on agriculture for their livelihood, Go did not hesitate to follow in the footsteps of his father, who is a farmer and agripreneur. Go is a commerce graduate who majored in computer application, but he still chose to go back to his roots and venture into farming.

Former IT is a millennial farmer

Go’s father Robert has been a corn farmer since the 1980s. His father serves as his partner and teacher in agriculture. Go learned everything by experience and by the knowledge shared by his father, who also learned farming from his mother. “I was able to appreciate what my father has been doing all these years,” Go said. Farming is the main reason why he and his father can provide for the needs of their family.

Go started planting rice 13 years ago using his mother’s inherited rice field. Since they reside in Isabela, the rice and corn granary of Luzon, rice and corn are the family’s main crops. Their corn and rice fields are located in different areas in Angadanan, Isabela. They harvest rice and corn twice a year and they can produce 130,000 kilograms of palay and 125,000 kilograms of corn for every cropping season. As a corn and rice farmer, income isn’t determined every month, but per harvest period. Go said, a farmer can earn from P40,000 to P50,000 per hectare of cornfield and P50,000 to P80,000 per hectare of rice in every harvest. 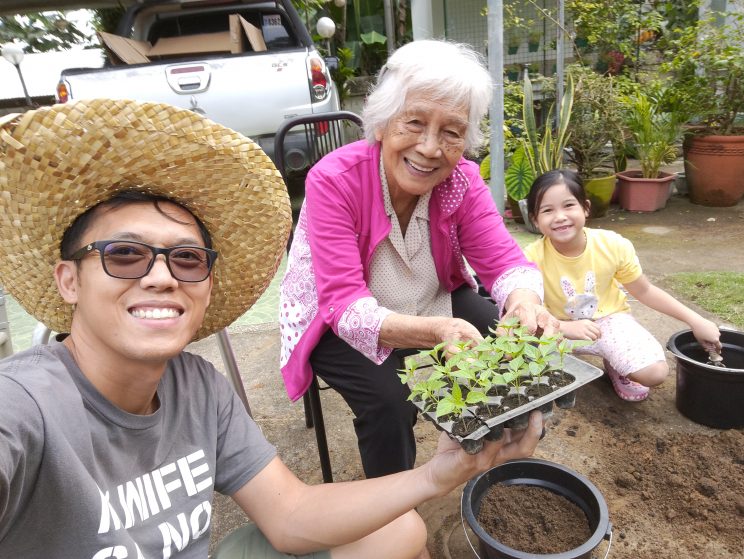 Nilor Go with his 98-year-old grandmother, who still grows plants with them up to this day.

“We only use hybrid corn seeds since it has a better yield and is more resistant to pests, while for palay we use a combination of hybrid and inbred seeds,” said Go. Their family also invested in machinery and equipment to help increase productivity and efficiency on the farm. They have tractors for land preparation, mechanized planters, and combine harvesters for efficient harvesting even with limited manpower. “We have also put up solar drying facilities and warehouses so we can dry our crops, store them, and sell them when the price is favorable.” The family also has trailer trucks that they use to sell corn crops at a higher price to main millers from other provinces like Pangasinan, Bulacan, and Batangas. The majority of their corn crops are for selling, while they also collect a few sacks of palay for their own consumption and sell the rest to local millers in the region. In terms of pricing, Go keeps a record of the price trends in certain periods for future reference.

The family also owns an idle land and instead of keeping it unproductive, they used the property to plant fruit-bearing trees, and soon, they will be adding vegetables, too. There are now thousands of mangoes, coconuts, and other fruit trees in the area.

Both Go and his father mainly run their corn and rice fields. They also have a few trusted farmhands whom they call managers. The managers supervise the farm every day and report to him when needed. In his 13 years in farming, he continues to grow as a farmer along with his trusted farmhands who have also built their own lives and families with the help of farming. Aside from providing jobs to the community, they also make sure to give their workers what they deserve. “One of our trusted farmers, we have awarded him a piece of land as a way of giving back to his service to our family. I am able to enjoy and do the things that I do because I entrust the farm to them. Trust is a rare commodity these days,” said Go. During the pandemic, Go realized, “My eyes have been opened that this job is not only for me to provide for my family, but it is also my means of supporting people who are struggling.”

For Go, farming is more than just a livelihood, but a lifestyle. “This lifestyle has afforded me to live unhurriedly, savor every waking moment, enjoy what God has given us through nature, cherish conversation with different people, and serve God.” 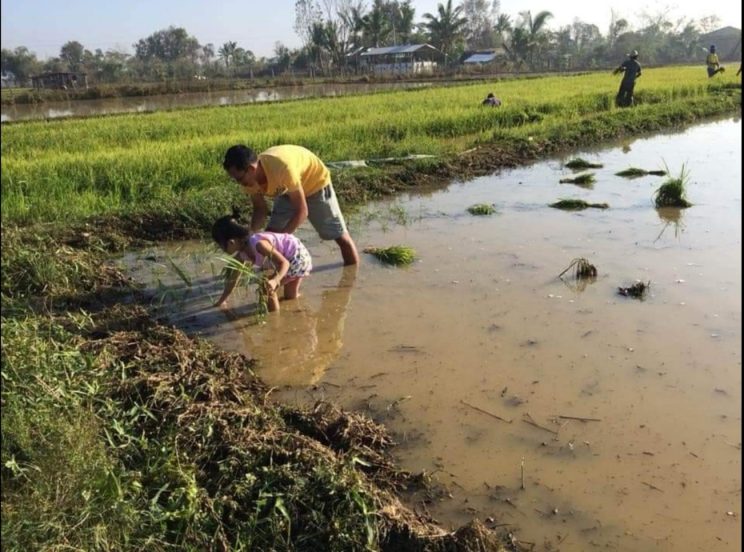 Go teaching his daughter how to plant rice.

The major benefit of farming in his life is having more time with his family. “I get to be with my wife and see my two daughters grow. Money is just a bonus.” Go added, “As early as now, I show them my life as a farmer in the hopes that they, too, will become farmers someday. Hopefully, with my father’s experience, my experience, and with further scientific learnings, they will have a better background to succeed in farming.”

With the average age of Filipino farmers at 57 to 59 years old, Go wanted to show the younger audience how farming can be lucrative by entering the vlogging world. “If this trend continues in 10 years, no one will be planting food for us to serve on our tables,” Go said on the declining numbers of Philippine farmers. He added, “This realization is my main motivation why I started vlogging last April 2020.” Through this, he also wanted to document his experiences for his future grandchildren to see his farming endeavors. 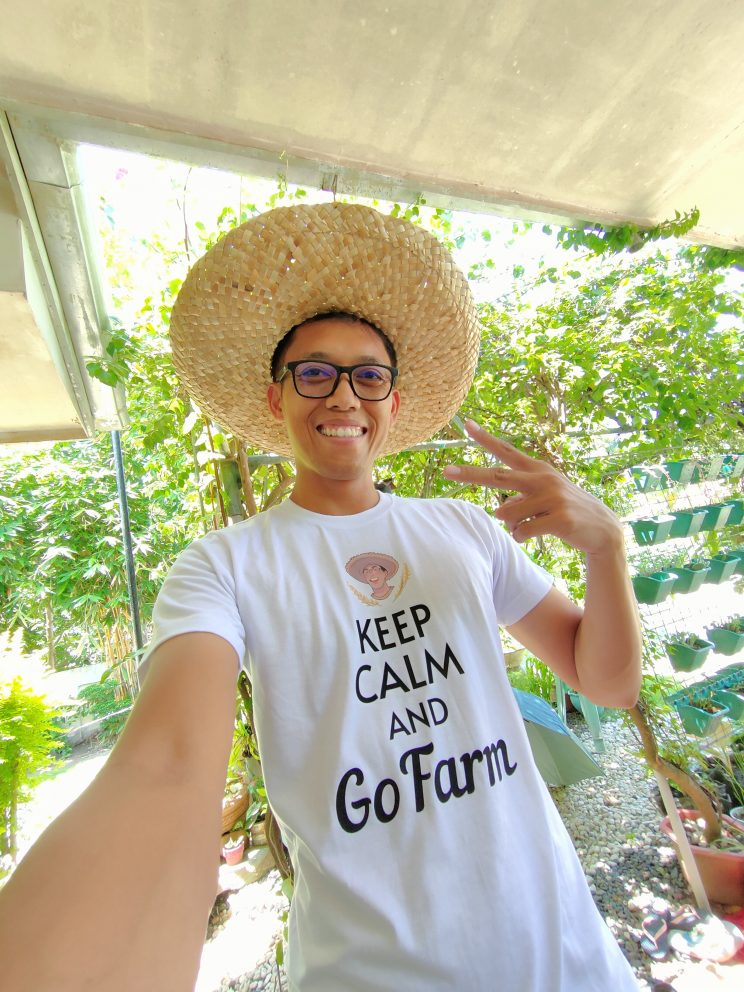 Nilor Go uses vlogging as an avenue to connect to young audiences and to show them that farming can also be a lucrative livelihood.

Go named his YouTube channel GoFarmTV. After uploading videos on different topics related to farming, he started earning from the vlogs that he creates. “Vlogging was a blessing in disguise, all I did was to capture what I was doing in the field and before I knew it, companies got interested in me.” Go usually earns P25,000 per vlog on YouTube through sponsors. When Typhoon Ulysses hit the Philippines last November 2020, he used his channel to raise funds and was able to donate cash worth P600,000 to the typhoon victims, which according to him, was made possible through the help of his viewers.

“I hope that through vlogging, I would inspire young people to look at farming in a different light, to view farming as a lucrative job, to come home to the province, not as a degrading choice after college, but an alternative career.” He added that farming does not only provide for the family’s needs, but one can also be used as God’s instrument to help people who are in need by employing them or even more. 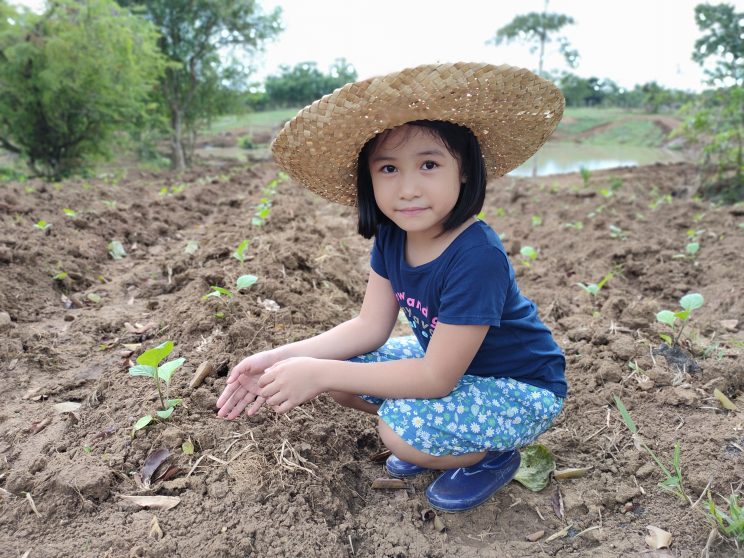 Go’s eldest daughter wants to be a farmer someday.

Like how he always ends his vlogs, his story indeed tells us that “May buhay sa farming!”

Seedling or weed? Some tips to find out which is which