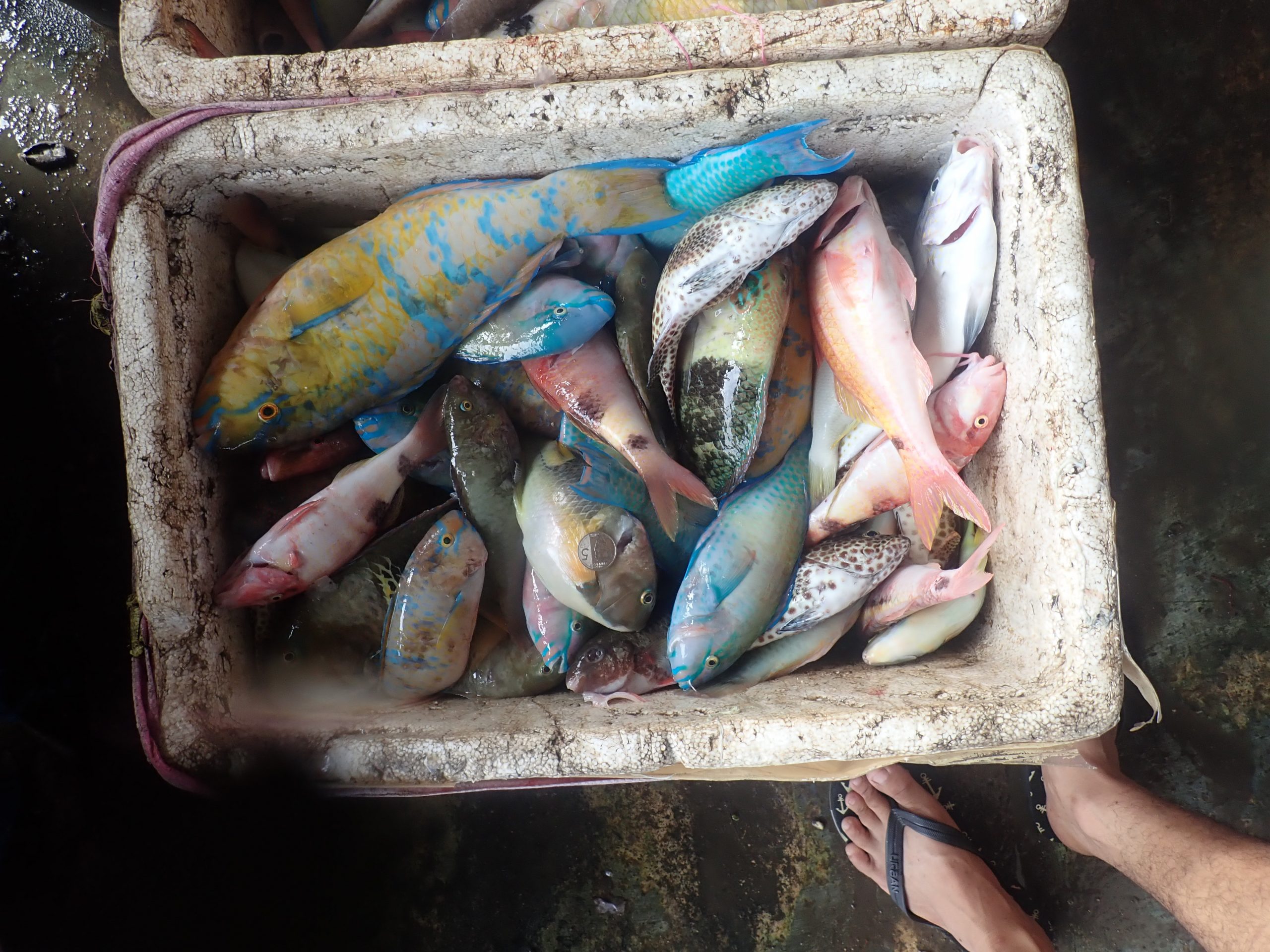 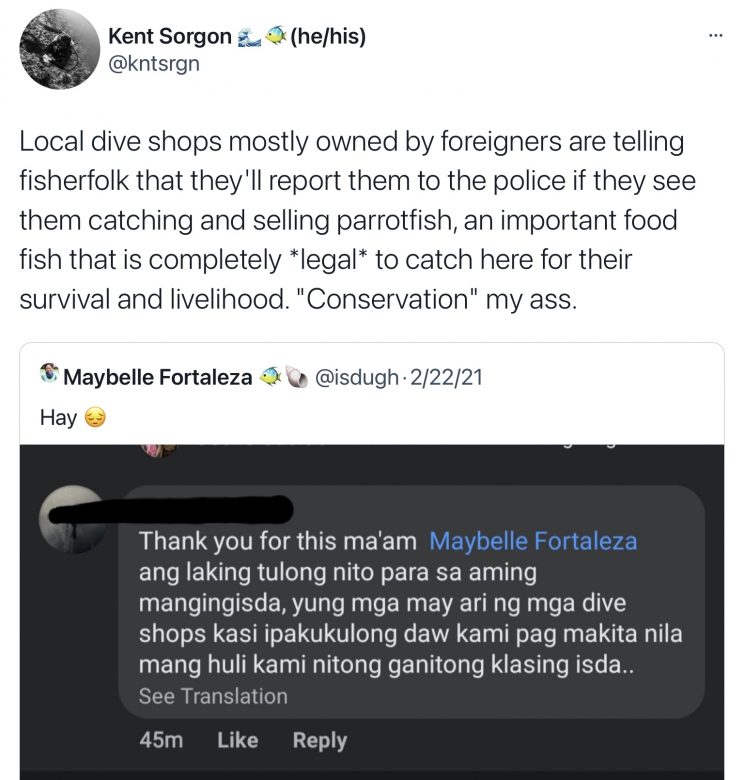 A screencap of Sorgon’s status that accompanied his retweet of Fortaleza’s post.

Maybelle Fortaleza, a University Research Associate for Coral Reef Resiliency and Ecology Studies Laboratory in UP Mindanao, tweeted a screenshot of a message she got from a fisher which, in Tagalog, thanked her for helping the because dive shop owners have been threatening fishers with jail time for catching parrotfish. Her accompanying status simply read, “Hay,” accompanied by a sad emoji.

This was retweeted by Kent Sorgon, an ichthyologist based in UP Los Baños, accompanied by a status message that said: “Local dive shops mostly owned by foreigners are telling fisherfolk that they’ll report them to the police if they see them catching and selling parrotfish, an important food fish that is completely *legal* to catch here for their survival and livelihood. “Conservation” my ass.”

“That was a screenshot of a comment on my Facebook post. Upon checking, this person was from Larena, Siquijor. There are also people sending messages via Messenger expressing their thanks for sharing my points. They claim to be fishermen from Bohol, Cebu, and Zamboanga,” Fortaleza said in an email interview. 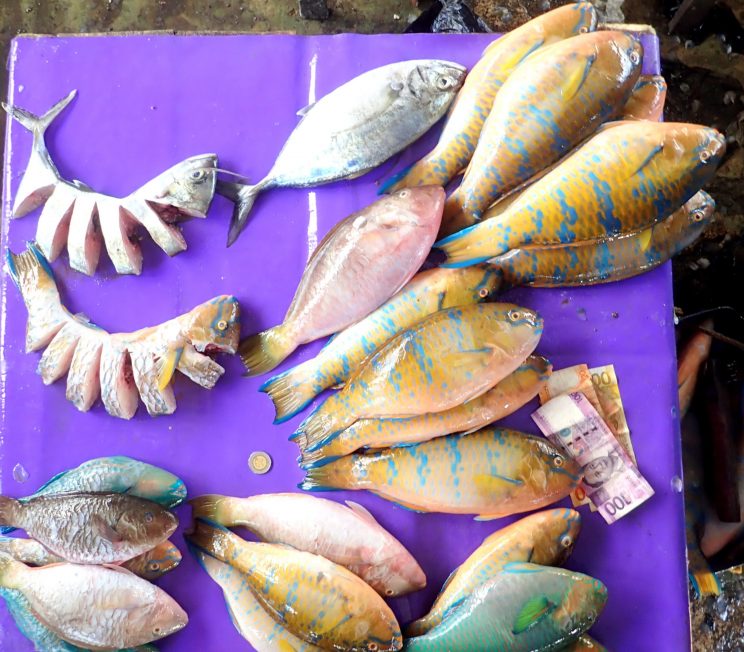 The spread of misinformation

Parrotfishes are found under the Family Labridae. They were formerly classified as Family Scaridae, but this has since been corrected. They are now considered as a tribe in the Family Labridae together with wrasses (Cheilini and Labrini). Found in tropical waters, parrotfishes are key components of coral reef ecosystems because of their roles in herbivory and reef bioerosion.

Some species are considered endangered in the Caribbean. This led to an information campaign which has gotten international coverage. This is probably what prompted well-meaning dive shop owners in the Philippines to take it upon themselves to protect local parrotfish as well. There’s just one problem: they aren’t endangered, and it’s actually legal to catch them.

“Honestly, I have no idea what their intentions are. I really dislike how these dive shops in the PH owned or co-owned by foreigners are trying to explain situations in the Philippines as if they really worked on the ground. I would like to emphasize that this is not limited to dive shops/dive shop owners. Anyone who is misinformed but has a large platform can cause equal harm to fisherfolk communities,” Fortaleza said, adding that several media outlets have been sharing misinformation about local parrotfish as well, and that she and her colleagues have been actively contacting them regarding this.

“It’s hard for us local scientists to beat misinformation especially when 1) these Facebook pages have stronger and wider reach and that 2) their page admins choose to ignore our comments, even private messages. This is harmful because if they frame the situation on conservation of parrotfishes, they become unaware of the consequences simply because they are not directly affected by it. What we wanted to say is that the 1) “facts” they were spreading about parrotfishes is inaccurate and outdated and that 2) saving the parrotfishes is not the panacea to the current climate/environmental crisis,” she said.

She adds that conservation efforts depend from place to place and that applying a one-size-fits-all approach may be detrimental to these efforts. An example of this is why the parrotfish ban in the Carribean should not be applied to the Philippines.

“They always claim that the parrotfish bans in the Caribbean should also be implemented in the Philippines because parrotfishes are already endangered. Again, fisheries management varies from place to place, to the point that every bay or gulf in the country must be managed at an approach that is fit to their conditions. The parrotfish ban is not a ‘one size fits all’ approach.

“The bumphead parrotfish, Bolbometopon muricatum is listed as Vulnerable in the IUCN Red List of Threatened Species. Fishermen are aware they are not allowed to catch and/or sell this species. The rest of the parrotfish species are listed in the IUCN as Least Concern. This only means more scientific studies are needed in order to elevate their conservation status and proceed with proper management measures if needed.

“Lastly, McClanahan and Muthiga (2020) reported that the abundance of parrotfish in Belize is not influenced by fishing mortality but rather the ecology of patch reefs. This means that if the habitat is not suitable, then you will not expect several parrotfish to thrive in the area. This is why we want to shift the perspective – we should look into the bigger challenge of preserving the coastal environment as a whole. This is where we can all participate.

“The LGU should look closely into their marine sanctuaries/MPAs and the academic institutions should also lend their expertise to encourage partnerships/collaboration should they decide to establish more marine protected areas. After all, preserving one group of fish will not magically save the environment. Parrotfish bans without scientific evidence will only lead to exploitation of other fish groups, which actually defeats the purpose of environment conservation and food security.” 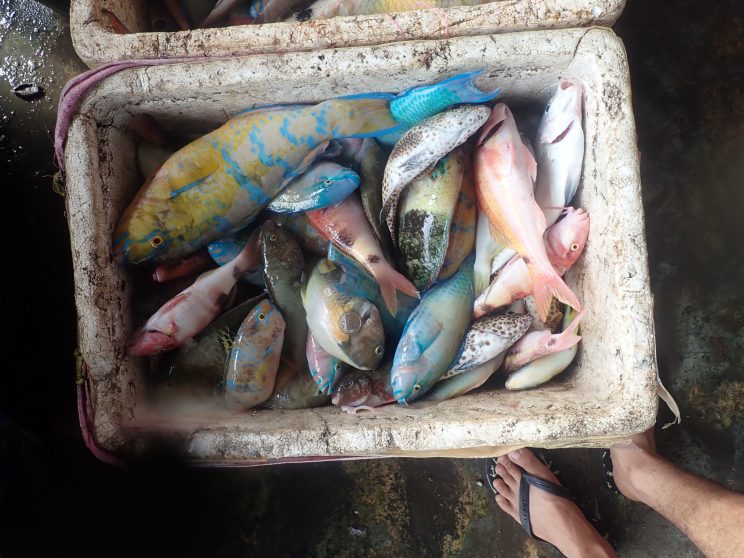 Fishers know what to look out for

When local dive shop owners reprimand fishers over parrotfish, they assume that fishers do not know which species they can and can’t catch. “In reference to calls for a parrotfish ban all over social media, the fisherfolk communities will not be at risk if everyone is properly informed. I believe we should shift our focus to more important things such as the issue on the West Philippine Sea,” Fortaleza says. “If we think about it, the calls for a parrotfish ban appear to be a band-aid solution to the bigger problem, which is the continued degradation of marine and coastal ecosystems”

In truth, many fishing communities work with local scientists and marine organizations and are well aware of the importance of conserving marine life. “The fisherfolk communities are aware of the laws, the importance of preserving marine protected areas (MPAs), and the reef fish species they should not catch. They are very knowledgeable and well-adapted, especially on their fishing gears and techniques. This is the very reason why fisheries management is expected to vary from place to place, aside from the fact that marine resources are also different,” she adds.

That said, there is still a lot to be desired in terms of rule implementation in marine sanctuaries, usually on an LGU level, but this is trying to be corrected, and has actually been successful in some instances.

“However, it is also important to recognize that not all are strictly implementing the rules and regulations that should be observed in marine sanctuaries/MPAs. This is why the academe, non-government organizations, and other stakeholders are encouraging local managers to look after their MPAs for recognition (See Para El MAR Awards). Several academic institutions and NGOs have been working with fisherfolk communities all over the country. This has been evident in giant clam restoration efforts of the UP Marine Science Institute and the success story of Apo Island Marine Sanctuary c/o Silliman University.”

Again, she emphasizes that while many people spread news items or try to “correct” fishers out of good intentions, these “good intentions” don’t help anyone when they’re founded on wrong information. Consulting with marine scientists and organizations before taking action is a good start.

“Dive shop owners, local legislative bodies, or let’s just say anyone who thinks that the Philippines must also apply the parrotfish bans imposed in the Caribbean should consult or discuss with their local marine scientists/marine biologists first before jumping into conclusions. Verifying information is important especially that mere opinions posted on Facebook with thousands of likes and shares are easily regarded as fact even though it’s not. Writers for news outlets should be equally responsible because they reach a wider audience.”

She adds, “I cannot speak for other academic institutions but at least in our area of coverage, we (UP Mindanao) are actively collaborating with higher education institutions (HEIs) in Davao Region and Sulu Archipelago through our research projects that focus on reef fishes. We organize training-workshops for our collaborators, provide internship programs for high school students, and participate in regional and national conferences to share our current knowledge and research outputs. What we do in the laboratory and whatever we write in our research papers must be communicated to people because it is also part of our duty.”

How the regular Filipino can help

So what’s a well-meaning Filipino citizen to do? The best way to combat misinformation is to stay informed and making sure that the information one gets has been vetted by field experts. “Fact-checking is very important especially that most people nowadays rely on social media for news. We should be responsible in whatever we post or share and we should be accountable if faced with questions or arguments. The parrotfish issue has put fishermen into bad light and it is unfair to crucify their means of livelihood that is 100% legal to start with. This would all have been prevented if people had been more careful with their words and if us researchers/scientists had equally delivered effort in conveying what we know,” Fortaleza said.

Another way the regular citizen can help conservation efforts is to travel responsibly (once traveling is allowed) and to document and report any anomalies they come across. Fortaleza offers some tips:

“Traveling around the country has been more accessible than ever so it is important that people should learn about responsible tourism. You can also become a citizen scientist by 1) documenting coral bleaching you have observed in your area (PH Coral Bleaching Watch) or 2) reporting marine mammal strandings (Balyena.org; and Marine Wildlife Watch of the Philippines).”

For folks who really want to learn how they can help conserve local marine resources, Fortaleza suggests attending the National Symposium on Marine Science. “Because COVID-19 has limited all face-to-face events, most conferences/symposia this year will be held online. The biennial National Symposium on Marine Science will be held online this July (PAMS),” she said. “I think anyone can join or sign up for the conference.”

Conserving marine resources is important, but it’s equally important to make sure that it is being done in a way that is compassionate to both the environment and the people who make a living from it.

Fair, nutritious, and sustainable: how the Participatory Guarantee System makes organic certification accessible to small farmers and all consumers