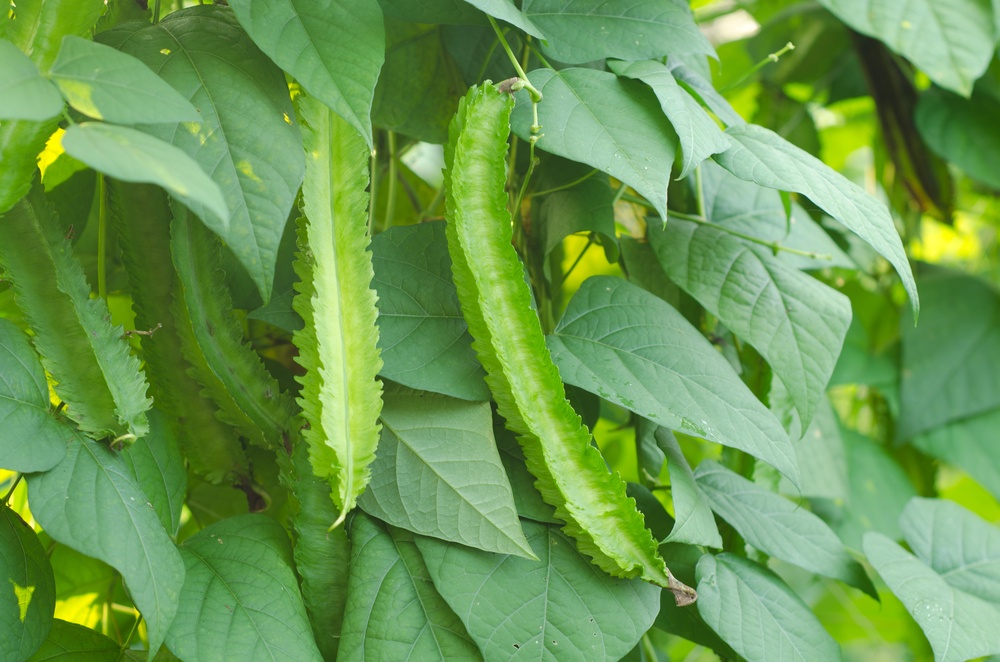 Photo by joloei from Shutterstock

The Filipino folk song “Bahay Kubo” talks of various vegetables that can be grown in a home setting. Among the vegetables mentioned is the sigarilyas or winged bean (Psophocarpus tetragonolubos), also known as goa bean or princess bean in other countries.

Sigarilyas is popular among Filipinos, particularly those in Nueva Ecija and Pampanga, as an ingredient in a dish called gising gising, also known as ginataang sigarilyas. The vegetable is also widely cultivated and consumed in several regions across Southeast Asia.

It grows and looks similar to the pole bean or sitaw, except sigarilyas has four angled wings that run lengthwise on the pod, hence its name.

The sigarilyas plant is a vine with climbing stems that produces three to six inches long leaves and six to nine inches pods.

Sigarilyas pods aren’t the only part of the plant that’s edible. Most parts of the plant can be used in different ways for consumption.

The flowers can be used to color rice and pastries with a purple hue and can be eaten either raw or cooked. Its young leaves can be prepared as a leaf vegetable like spinach, while immature seeds can be added to a soup.

Even the roots are edible as these can be used as a root vegetable, like the potato, and it even has a nutty flavor.

But being versatile isn’t the only thing that makes the sigarilyas a favorite vegetable. Each of its parts provides a source of vitamin A, vitamin C, calcium, iron, and other vitamins. It is also known for its high protein content.

While common edible tuber roots such as yams and potatoes have less than seven percent protein content, sigarilyas has 20 percent protein found throughout the plant’s parts.

Aside from its health benefits, sigarilyas is also a nitrogen fixer, lowering its need for fertilizer while increasing the amount of nitrogen in the soil.

Being resistant to high temperatures but not against drought, sigarilyas can be grown as a dry season crop as long as it receives the right amount of water. But it’s important to note that it should not be overwatered because this can reduce the growth of roots and root tubers.

When it comes to soil, sigarilyas isn’t very demanding provided that it is planted in soil with moderate drainage since it can’t tolerate waterlogging or salinity. It will thrive best in rich, sandy loams.

Growing sigarilyas from seeds requires some work for it to germinate properly since there are some difficulties in making it sprout. To work around this, the seeds must be first soaked overnight before planting.

The next step is to plant the seeds in holes that are one inch deep and two feet apart in rows that are four feet apart. Fertilize shortly after to promote growth.

Its vines can either be trellised or not but trellised vines produce more legumes compared to those that are not.

Pods will begin to grow within two months and will continue for several weeks. On the other hand, if being grown for tubers, it can be harvested around four to eight months after sowing.

Pests and diseases to look out for

When intercropped with sweet potatoes, taro, bananas, and other crops, sigarilyas tend to be free from serious pests or diseases, though the plants can be occasionally attacked by caterpillars, leaf miners, grasshoppers, spider mites, and nematodes.

Nematodes, or root knot nematodes, are a form of roundworms that are known to attack plant roots. There are two kinds of nematodes: predatory and parasitic.

The predatory nematodes are beneficial to plants as it attacks an assortment of garden pests. On the other hand, the parasitic nematodes, often invisible to the naked eye, consume living plant matter, causing the plant to shift its attention from developing new leaves or fruit to repairing the damage to its roots.

Root knot nematodes fall under the parasitic category as these can cause plants to look weak, yellow, and develop stunted growth. Their chewing on the roots can also enable other diseases to take hold of the plant as well.

Aside from using nematicides to control nematodes, another natural solution among various others is using marigolds as a cover crop because these release a natural compound into the soil which is toxic to root knot nematodes.

If grown correctly, sigarilyas plants will produce pods, and other parts, that Filipinos love to consume in a variety of ways.