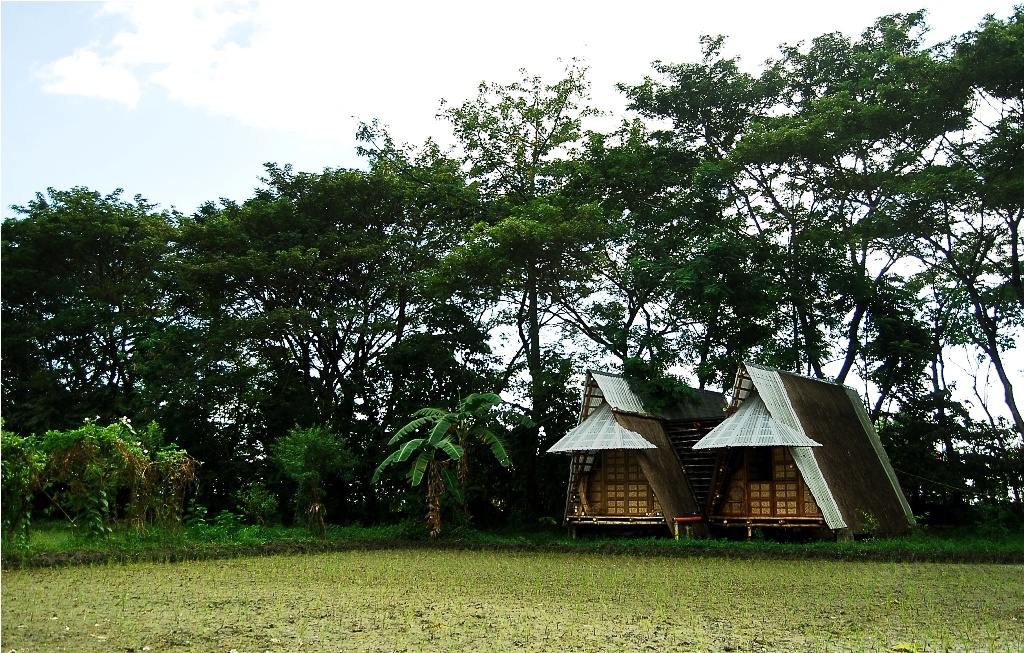 The Cabiokid accommodation is diverse and versatile as well. Some bamboo huts are hidden along the edge of the forest, facing the morning sun and allowing the afternoon breeze to cool off their residents. Amazing stay with great views of the rice plains.

“Permaculture, a design system that works with nature and could bridge the gap focusing on the ecosystem. In this case, a farming ecosystem in a very ordinary place in central Luzon,” was how Bert Peeters described the permaculture site he founded 20 years ago.

Cabiokid Foundation Inc. is a permaculture site located at Cabiao, Nueva Ecija. Its name is a contraction of the municipality where it was built, Cabiao, the word ‘bio,’ and ‘bukid.’

Bert Peeters is a product developer and industrial designer from Belgium who lives in the Philippines. Peeters is currently the head manager of the Philippine Permaculture Association (PPA) and the founder of the Cabiokid Foundation Inc.

“I have been the founder of the Cabiokid Foundation in 2000 and I’ve been managing that until 2012,” he shared. Peeters and his team thought of the word “foundation” because according to him, “Permaculture was a very new concept in the Philippines in 2002. Even if the term would have been around the world since the ’70s but in the Philippines, it was a struggle to kind of promote it,” and “the word ‘foundation’ can bridge the gap of focusing on education, awareness, and how permaculture can help farming communities to kind of increase their income.

Cabiokid Foundation Inc. was built on a 4.5-hectare piece of land. The land used to be a plain monoculture field, “blank as a desert,” as Peeters describes it. The land was owned by Peeters’ in-laws. When he came to the Philippines in 1989, he used to conduct educational and literacy programs as well as organic farming courses, combining it with teaching methods.

In his 10 years of stay in the country, he was personally frustrated because he witnessed how people tended to depend on farms. However, when farms lose their fertility due to seasonal changes, farming projects tend to eventually disappear. He saw that the Philippines is an agricultural country, however, farmers are not well compensated for. Peeters could not accept this kind of problem as his framework is about sustainable development.

Out of frustration, he looked into farming models that can break the link between the monetary needs of people and community survival. He became interested in permaculture, which is “a design system that works with nature and could bridge the gap focusing on the ecosystem. In this case, a farming ecosystem in a very ordinary place in central Luzon.”

Peeters converted the 4.5-hectare land area into a permaculture startup landscape using the minimum resources available, which involved the culture of farming in the country that uses carabao and other traditional methods. “If we can make a change here, probably, and hopefully, people can pick up some of the ideas that we bring in here,” he said. That’s how the Foundation started. 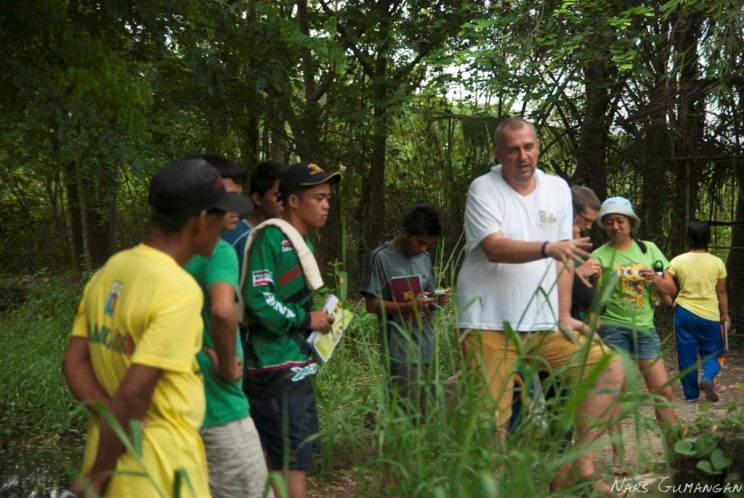 “The planting of rice is done in subdivided fields that are fenced in by perennial vegetation to ensure the fertility of the soil at all times.” -Bert Peeters

Soon, the 4.5-hectare land became 13 hectares. All 13 hectares are productive, depending on the capability of people to cultivate it. Some areas require a greater amount of energy while others may require less.

At the time of starting the permaculture site, the Cabiokid team did not have a lot of money to start everything. Through the farming culture in the country that uses carabaos and other traditional farming equipment, the team resorted to computing how much these materials would cost. Instead of buying materials, Peeters decided to invest in a “permaculture start-up landscape.” They tapped contractors of bulldozers and dilapidated backhoe and made some infrastructure changes that helped the landscape bounce back into its fertility.

Then they divided Cabiokid into four zones. Zones one and two include vegetable and pastoral farming; things that need a lot of attention. These zones are for planting crops that are necessary on a day to day basis. Zone three includes rice farming. The rice planting activity in Cabiokid is a continuous effort but it is not as necessary as the former zones because most of the time, it does not require a lot of energy aside from planting and harvest season. While zone four contains bamboo plants, orchards, and other forest trees.

It took Peeters and his team, eight long years of cultivating the land. “Helping and guiding the system to bounce back to fertility and to productivity,” Peeters said. He always tells people to give any piece of land at least three years, using proper permaculture methods, to adequately rehabilitate its soil.

READ: Five things to remember before starting a permaculture farm

“Three years is needed to be able to make the land jump into a self-sustaining ability,” he explained. If the land reaches this ability, it will require lesser energy from the cultivator and the land itself will take over with productivity. In this way, they were able to rehabilitate the fertility of the soil.

The most basic thing to do is to plant. According to him, the more you plant, there will be more root systems on the ground that results in the production of mycelium (the vegetative part of a fungus). The more you create this kind of fertility link, the more plants will benefit from that soil activity, even the ones planted on the most shallow layers of the soil. This process shows a pattern of how we can work with nature to productively come up with something we need.

On the other hand, during the pandemic, Cabiokid as a perfect model of permaculture also shows a diversity of resources. The constituents of the Foundation, regardless if they are still earning profit or not during this crisis are guaranteed to survive through the permaculture system they are part of. 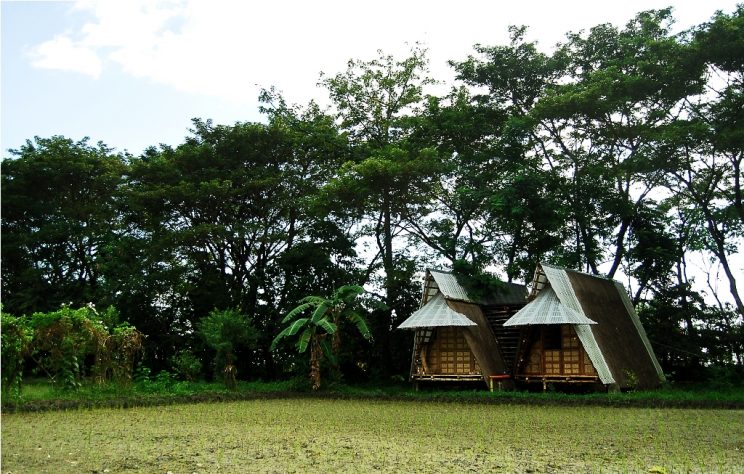 The Cabiokid accommodation is diverse and versatile as well. Some bamboo huts are hidden along the edge of the forest, facing the morning sun and allowing the afternoon breeze to cool off their residents. Amazing stay with great views of the rice plains.

Even during natural disasters like typhoons, a permaculture site that includes bamboo will be more resilient, sending the message that the ecosystem will defend humans and all existing forms against anything if nature is cultivated properly.

These are just some of the many examples of how permaculture works. It is understanding the language of nature and translating that pattern into something productive. Also, there is no such thing as pests in a permaculture site, as they are referred to as permaculture resources that keeps the balance in nature as an open-source system.

As Peeters grew Cabiokid Foundation Inc. as a permaculture site, just like anyone else in their journey, he was not spared from the challenges. According to him, the greatest challenge to overcome is people. In his case, specifically his neighbors. He explained that when they started planting trees people were saying they were crazy for planting trees again because  20 years ago, the field was cleared already, and replanting will put the soil to waste.

Then, when it comes to water and irrigation, people were quick to assume that Peeters and his team would be building a resort in the area. Issues and judgments of people are what usually challenge situations more than the real problem.

Fortunately, with what Peeters has learned in permaculture; the energy equation that everything works on the balance of energy. “We only have so much in our life, why go out and convince the inconvincible? So we saved our energy to prove something real on the ground. We closed our ears, then we pushed through with our business. And if they are ready to understand, to ask questions, then they will come to us. And we will be open to answer them,” he explained.

Peeters added that challenges are always people, not only the people outside but also the people you work with, and you have to stand up against people who are trying to bring you down and on the other hand, nature is the easiest thing to work with.