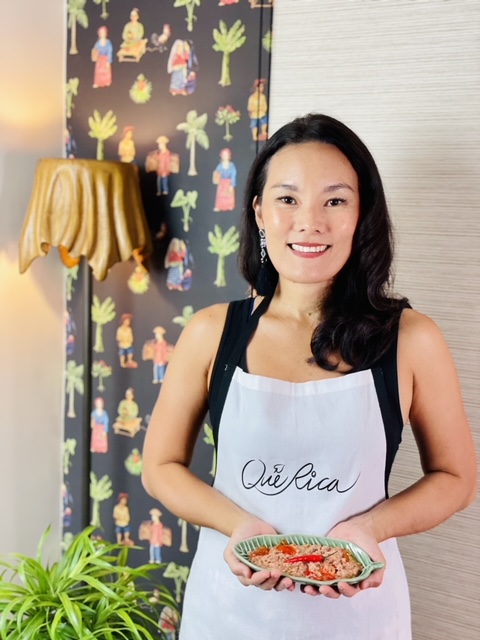 Contrary to what we know, Bicolano food is not just about being spicy.

Mesa ni Misis has begun a series called Bahay Kubo kitchen where we feature cooks from the different regions in the Philippines. We then ask them to choose their three favorite crops to use from the area. This is to promote not only the local cuisine, but more importantly to highlight crops that are endemic to the area. The guest cooks then share recipes they have making use of the native crop, while I create a new recipe using the same crop. The idea is to find new ways to serve up local native produce in creative new ways and hopefully give people a new way to look forward to eating them.

Rica Buenaflor has been making waves in the local culinary scene with her brand Que Rica, that highlights the cuisine and produce of Bicol. Originally from Davao, she fell in love with Bicol and its cuisine when she and her husband Carlo (from Bicol) moved there to help with the family business.  She and her husband also founded the Best of Bicol movement in 2012, which brought together a group of like-minded creative individuals who wanted to promote the best of what Bicol has to offer. Their endeavors are geared toward showing both Bicolanos and non-Bicolanos what the region has to give, and now include a website, an app, and a Best of Bicol food tour. Rica, a Cordon Bleu-trained chef, chose to highlight Bicolano cuisine as she discovered that there is so much more to the cuisine than laing and Bicol Express. Here, Rica shares her insights on Bicol cuisine.

What motivates you to promote Bicol cuisine and all things Bicol?

Living in Bicol made me realize that Bicolano cuisine is underrepresented. There’s so much more to Bicol cuisine than laing and Bicol Express. Que Rica’s brand values are healthy, local, and proud. These are what guide us as a company. We believe that if we stay close to our roots and promote what is locally available and support the hands that grow and nurture them, that this will lead to a healthier person, a healthier country, and thus a healthier planet altogether. This is what motivates me. That by doing what I do, I will leave a legacy that will make the younger generation Filipinos proud of their roots and their food.

Can you give us any insights to the Bicolano way of eating, other than what is ‘known’ (such as spicy food and coconut milk)? What is a nuance they have in the way they enjoy food?

Bicolanos are very simple folks. It is true that most Bicolano food has coconut milk in it. And cooking with coconut milk involves a lot of technique. For some reason, the Bicolanos are unaware of these inherent techniques that they practice when cooking with coconut milk that they take it for granted, oftentimes even a bit ashamed to share. It’s not that they are not willing to share, it’s that they think that a particular cooking tip or technique is too unimportant to share. But it makes a whole world of difference in the preparation of the dish. A Bicolano kitchen is very communal. Because of the different steps involved in preparing the food, there are usually a lot of “manangs” in the kitchen, preparing different steps. The food preparation is a bigger event, than eating what was prepared.

Can you share with us the traditional Bicol dishes made with our chosen crops (santol, gabi, and gata)?

Ginataang santol or sinantolan, laing, and pinangat for gabi and gata is found in all the dishes of Bicol

What do you hope to achieve by utilizing pili and other endemic crops in your cuisine?

To elevate Bicol cuisine and introduce it to the rest of the Philippines making it a staple in our kitchens and hopefully one day be recognized internationally too.

Are there any misconceptions about Bicol and its food you hope to break by promoting the food from the area?

The most common misconception about Bicolano food is that they are all spicy. To much of my surprise, not all are spicy. In fact, less than half are spicy. Also when using gata, the primary ingredients in cooking the dish are not sautéed. For example when you cook laing, the aromatics namely onions, garlic, ginger, and lemongrass are not sautéed, they are merely simmered very lightly in coconut milk to infuse the flavors very subtly into the coconut milk. This imparts a lighter aroma and flavor vs sautéing the ingredients.

Rica has chosen three ingredients from Bicol to highlight. While pili nuts are from Bicol and are heavily promoted, it’s interesting to note that locals do not make use of pili in their everyday dishes, instead, Rica chose to highlight gabi, santol, and gata, as they are widely used in Bicol cuisine. 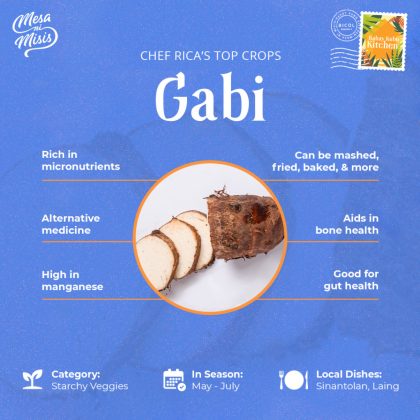 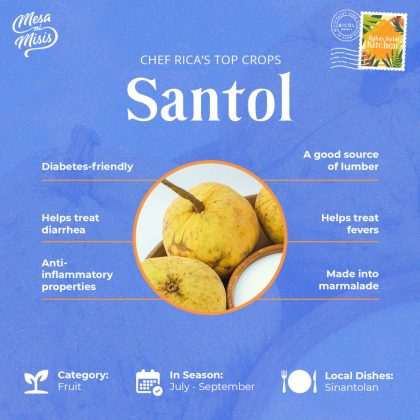