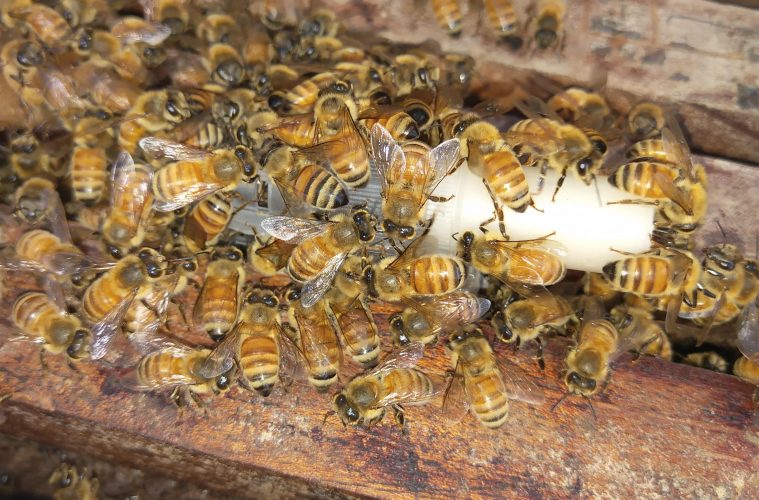 Bees are important to agriculture because they help pollinate many crops that feed both humans and livestock.

Honey has been an important food source since the dawn of mankind. It is delicious, nutritious, and has a long shelf life. Humanity’s love for honey continues to this day, with beekeeping being a popular hobby and source of livelihood that can be cultivated in the city or province, as long as there are sufficient flowering plants nearby where bees can gather food.

One such apiary is located in the Molo district in Iloilo City,  just a three minute walk away from Molo church and about a hundred meters from the Iloilo river. “What’s good about our place [is that], because Iloilo is so green, the river, which is not so far away from my house… [is] full of mangroves and natural trees because the rehabilitation of the river has been going on for years and in fact, fishes are being caught within the river,” says Wilfrido “Jonji”  S. de Jesus Jr., the proprietor of Two Bees Apiary. 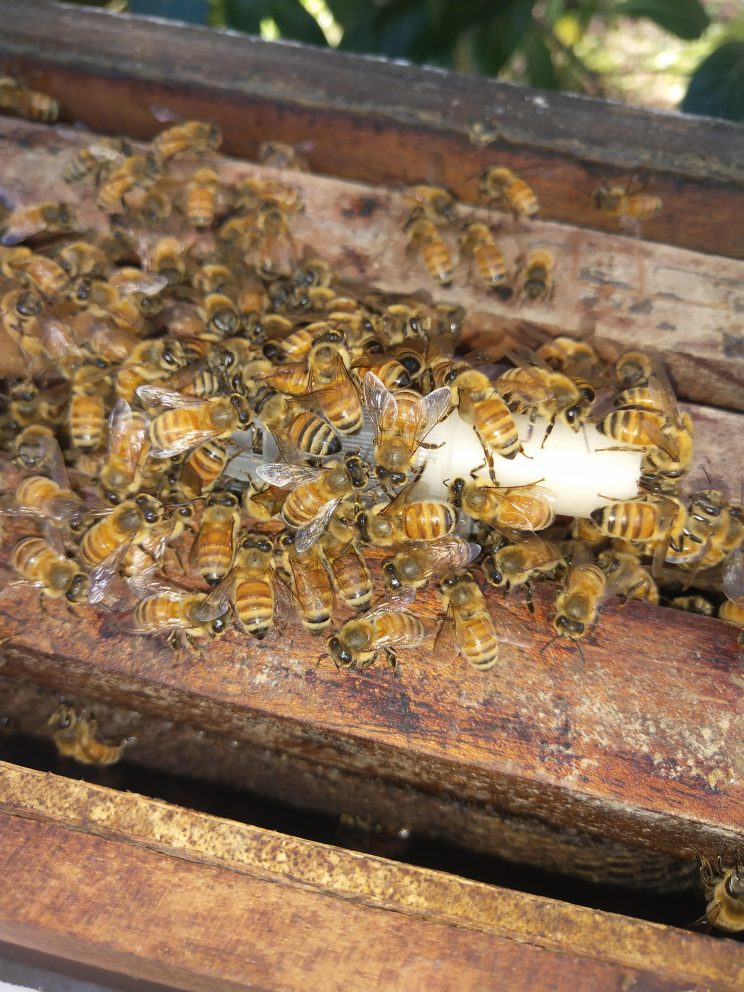 Bees are important to agriculture because they help pollinate many crops that feed both humans and livestock.

De Jesus is a Manila transplant who settled in Iloilo to manage the family business. Around 2009, his brother got into beekeeping and asked if he wanted to try it out as well. “I went into beekeeping as a hobby, and… I saw that there’s money in it. In short… if you take care of [the bees] well and you have a good harvest, you get some money. You get something for your pocket. Literally, the bees are paying for electricity at home, and my water [and] most of my utilities. It’s a reward. It’s like you’re helping them and you’re also helping nature because they are the best pollinators,” he says.

The apiary is located in a 600sqm lot that currently contains 16 hives, though the area can comfortably hold up to 20. “I found that my saturation point for the bees for the foraging area is 20 hives because more than 20, they would be competing too much with each other foraging for nectar and pollen,” de Jesus says. “[Each] hive is just a bit smaller than a balikbayan box.”

The de Jesus family are all beekeepers, though his son Justine Louie is more active in the endeavor than his wife Luth.

A shortage of queens

The reason de Jesus only has 16 hives at the moment is because he had to start from scratch. “There was a problem for years because of the importation of queens. The bees that I take care of is the species Apis mellifera, which is not native or endemic in the Philippines. It is imported,” he says. “We also have our local bees of course. UPLB did some studies so our bees are the imported Italian bees that are not invasive to our local bees.”

Because of the halt in the importation of queen bees, de Jesus and his brother ventured into artificial insemination (AI) to produce more queens. This was around 2018.

Eventually, de Jesus’ brother was able to get an importation permit and as of the time of the interview, is the only legal importer of honeybees in the country. “If there are honeybee queens coming in, they’re smuggled because my brother is the only one who can legally import them because we go through the process, we go through the Bureau of Animal Industry and everything, we pay taxes,” he says. The imported queens are sold to beekeepers all over the Philippines. 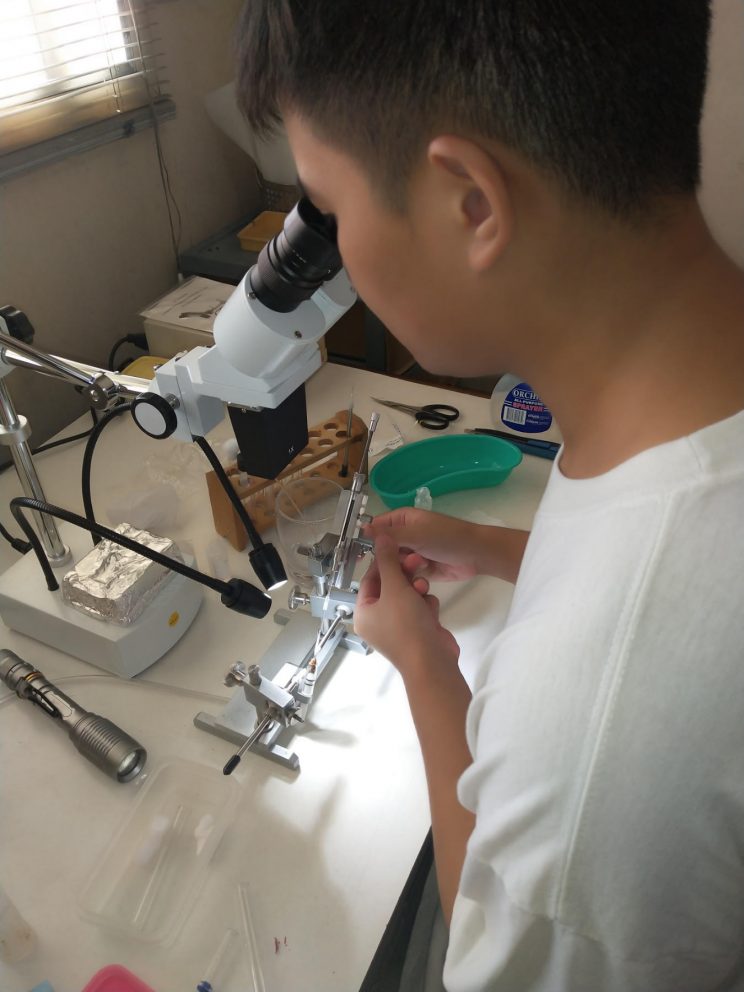 Two Bees Apiary also has artificial insemination (AI) services for European honeybees, one of the handful available in the country.

“I started with one hive and in a month, it became three, and then every other month, it exponentially increased, so from one it became three, then it became six, then 12, it doubled until I reached the point that I noticed that the foraging area is already being saturated. From there, I stopped increasing my colonies for this area. They can travel up to seven kilometers away from the hive just to look for nectar and pollen. That’s how far they can go to find food,” he shares.

What people call honey is dehydrated nectar that bees use as a food source. Worker bees gather nectar and bring it into the hive. Inside, house bees store the nectar in honey cells made of beeswax. These are the yellow hexagonal-shaped containers associated with honey. The bees use their wings to fan the nectar until most of its moisture evaporates, leaving the sticky, sweet, often golden substance that is enjoyed all over the world. Once the honey is dry, the cell is sealed with more beeswax. “Honey is dehydrated nectar. Some people… think it’s different but no, it’s just the same,” de Jesus says.

Since honey is bee food, de Jesus is very particular about how much honey he harvests. He makes it a point to always leave enough for the bees to live on. “We humans, I could even say we rob the bees of their food, really, because that’s their food. Now in return, once we get their honey, we have to make sure that they can sustain their population,” he says. 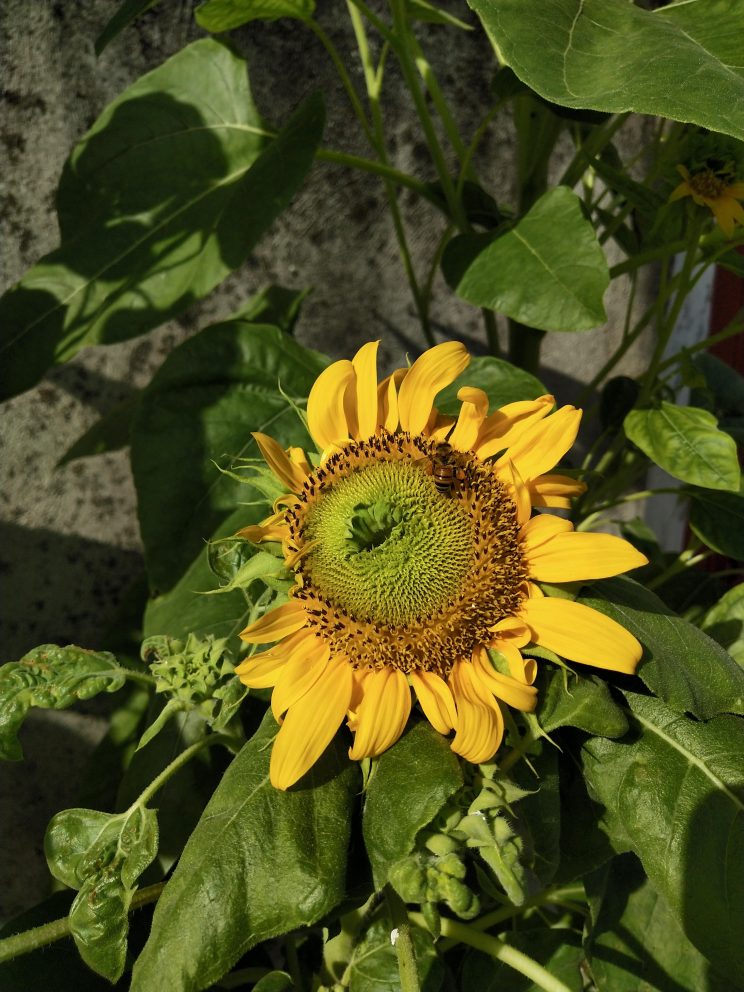 Bees can travel up to seven kilometers to find nectar from flowers. Their range is one of the reasons they are integral pollinators.

To make sure that his bees don’t starve, de Jesus makes sure to harvest only their excess stores. “They are hoarding insects, like ants. They store food for the rainy season or for harder times. That is [what] we harvest,” he adds.

How does he know that the honey he is harvesting is the excess? The hive is divided into two chambers. “The lower chamber, where the bees are, we call it the brood chamber. That’s where they rear their young. That area should not run out of food. Now, if there is excess, if you’ve seen a hive, there’s another box on top. That’s where the excess goes. The queen cannot go up. We put something in between called the queen excluder. The workers can pass through but the queen cannot because the queen is bigger. The hole is just enough for the workers to pass so the workers can bring up the food and store it there,” he explains. “That’s what we harvest, the one on top.”

Of course, when talking about honey, one cannot help but touch on the question of “fake honey” that became a big concern in the latter part of 2020. De Jesus explains that what is called “fake honey” is usually honey made by bees fed with sugar water instead of nectar.

“Sometimes… [the bees cannot gather] enough [nectar] to sustain [themselves] so [beekeepers]…  have to feed the bees [sugar water] and the topic of fake honey comes up. Here, we’re so blessed that we rarely feed [the bees],” de Jesus says. “Like this year, we only fed for two weeks. After that, nectar started flowing in but just enough for them. We could not harvest.” 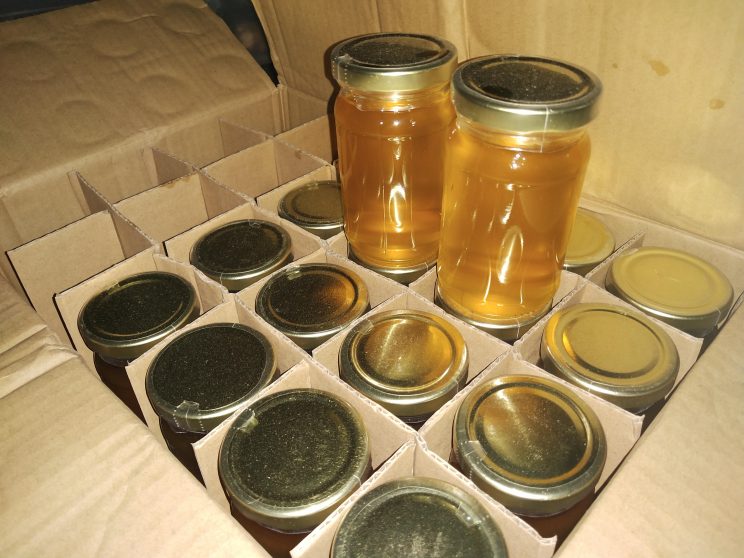 Honey is made from concentrated nectar. Pure honey should smell subtly like flowers.

He stresses that he doesn’t recommend feeding bees sugar water unless necessary. “If they can’t find any more nectar, then you’ll have to feed them, especially during the rainy season,” he says. “But during the honeyflow [season], it doesn’t matter. Once you fill it up, once you open it the following week, you’ll see some honey again.”

To keep the honey that he sells pure, de Jesus doesn’t harvest until a month after the bees have gone back to using nectar. “After you feed your bees [sugar water] give them at least a month. Don’t harvest within a month after the last time you fed [them sugar water] because within that four weeks, there could still be sugar syrup within the hive. It’s a practice that we do in order to protect our product,” he says.

According to de Jesus, honeyflow season in Iloilo starts as early as October and ends in June or July. When he had 20 hives, he would be able to harvest an average of 27 gallons of honey a month. When he started, his honey sold for P3000 a gallon. “That’s still big money that you get only in your backyard,” he says.

Prices have risen since then, now that more people have realized how the taste and quality of premium honey differs from most commercially available kinds.

The number of beekeepers in the area have also increased, something which de Jesus welcomes. “It was really so hard to sell [at first] because the honey we sell is priced equivalent to the imported ones. They say, ‘Why will I buy that when I can buy imported?’ It’s the Filipino mentality, of course. Now over the years, we sell one to one person and that one person says it’s good. Eventually, it networked itself into a big, big demand chain [so] that we could not even supply them all. You could say it’s a good problem… {It’s come] to that point that now, when we have a harvest, it’s very easy for us to sell and we now command prices that are really profitable for us like if a gallon before was P3000, now it’s P4,500. In Manila it’s more expensive.”

The pandemic has given de Jesus time to focus on his bees. The family business closed a decade ago, and his venture of operating food kiosks for schools has been put on hold. “ I have to concentrate more on my beekeeping to sustain ourselves, of course,” he says. He is also currently in the process of setting up a cooperative of beekeepers who sell hives and conduct training.

A decade into the hobby, de Jesus is still very happy to have discovered beekeeping. “It’s like a piggy bank… in your backyard,” he says. “You take care of them, they give you honey, you take care of them and by the time the honey comes, you sell it.”