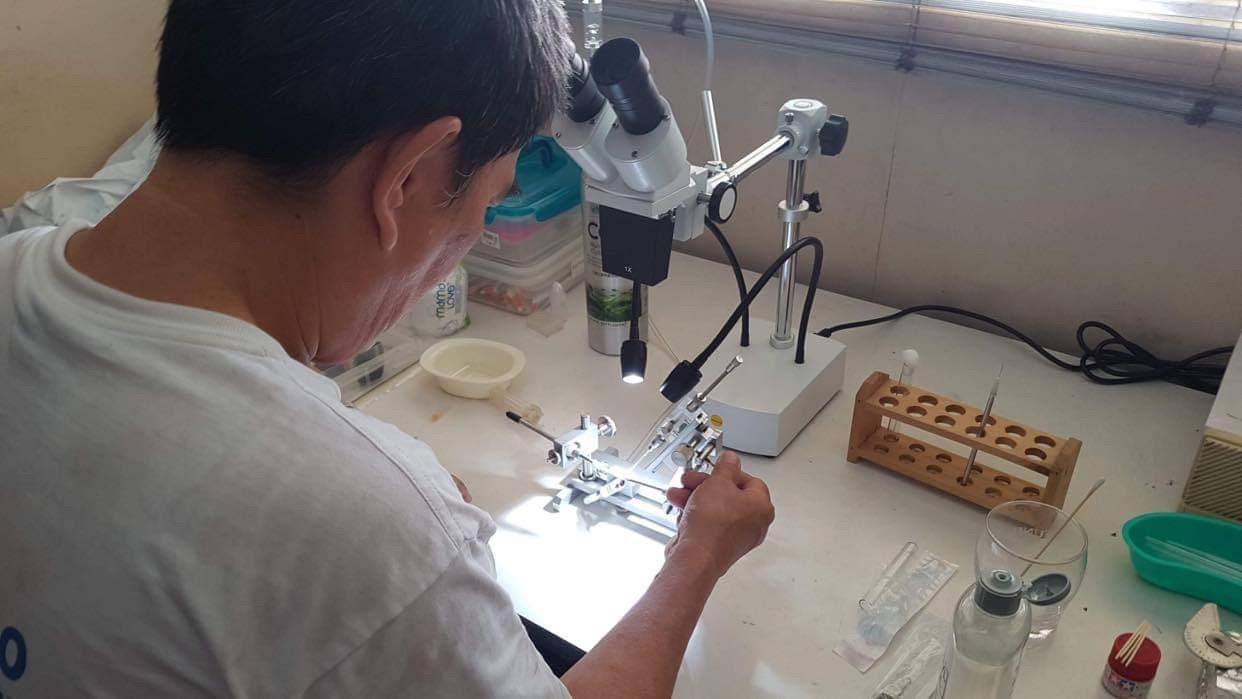 There’s a worldwide shortage of bees. This, added to the limited number of European honeybee queens imported, makes the availability of artificial insemination important.

Two Bees Apiary in Iloilo City is a small urban apiary with aout 16 hives. Aside from being a beekeeper, its owner, Wilfrido “Jonji”  S. de Jesus Jr., runs an artificial insemination (AI) lab for European honeybees (Apis mellifera), one of the handful in the country. He ventured into AI around 2018 after encountering difficulty acquiring queen bees for his colonies after the importation of Apis mellifera was temporarily halted a few years ago.

“AI (artificial insemination) is a process that has to be done under the microscope because the bees are so small we need a microscope for us to see the reproductive system of the queen,” he says.

The queen is injected with semen extracted from male bees, also known as drones. Queen bees are prolific layers, producing around 1,500 eggs per day during honey flow season.

According to de Jesus. Artificially inseminated bees are just as prolific, if not better than naturally mated queens. He explains that while naturally mated queens mate with anywhere from eight to 20 drones mid-flight, “in artificial insemination, what we inseminate is a measured amount which is equivalent to the maximum that the queen can breed.”

This can mean that the queen can be loaded with more semen than she might have gotten if naturally mated.

The proof is in the laying

There is currently no certification for becoming an AI practitioner in the Philippines, though in other countries, certification can be issued after undergoing training. “ But the real certificate is if you have produced a queen that lays eggs,” de Jesus says. “ What we do… is instead of a certificate, we just show them the results. When they buy the queens and it lays good [eggs], it’s more than enough for [the customers] to be satisfied.”

His clientele include beekeepers from all around Negros. His brother, who introduced him to beekeeping and AI, ships queens all over the country.

There is a global concern over the diminishing number of bees worldwide. Nobody has pinpointed a specific cause yet, though suspected causes include pollution, pesticides, and loss of habitat and foraging area.

Bees are integral to pollination, which is needed for plants to multiply. Without them, the agriculture industry, not to mention whole ecosystems, would be severely crippled.

Keeping bees and encouraging their reproduction, aside from making money for the beekeeper, also helps boost the population of bees worldwide.