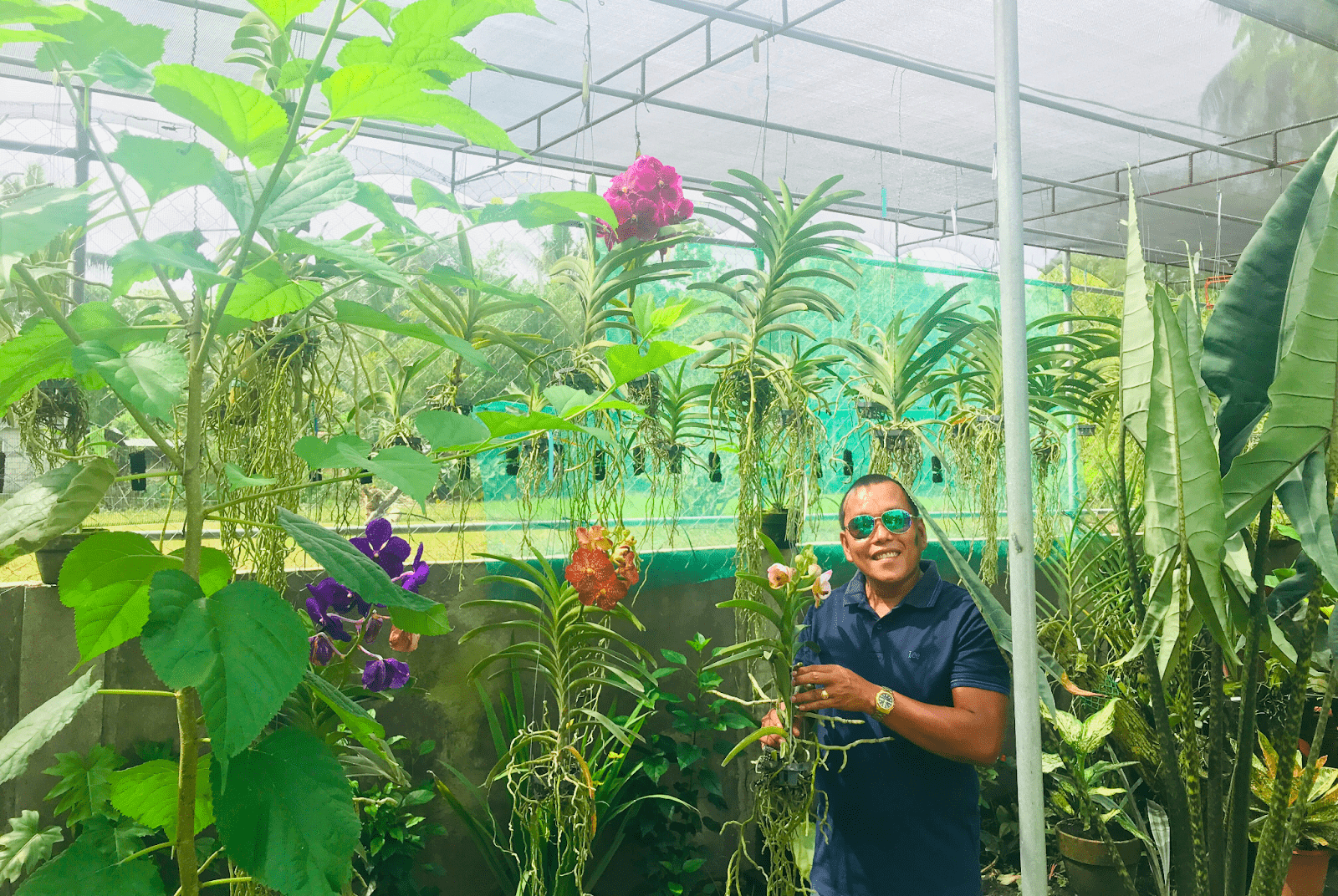 Rodelio B. Pasion, Ph.D., 42, in his 200 sqm ornamental garden composed of lush orchids, a few fruit-bearing trees, and other ornamentals like philodendron, alocasia, and aglaonema.

Being raised on a farm, Pasion has developed an affinity for flowering plants. He has grown several ornamentals in his backyard as a teenager. As his priorities began to change, he had to give up gardening at some point in his life to focus on his career.

While stuck at home due to the COVID-19 pandemic, Pasion has rekindled his love for ornamentals, specifically for orchids, which led to the creation of an orchid garden called “El Paraiso.”

El Paraiso is a 200 sqm in Buenavista, Agusan del Norte that is home to numerous orchids, with vanda being the predominant variety. 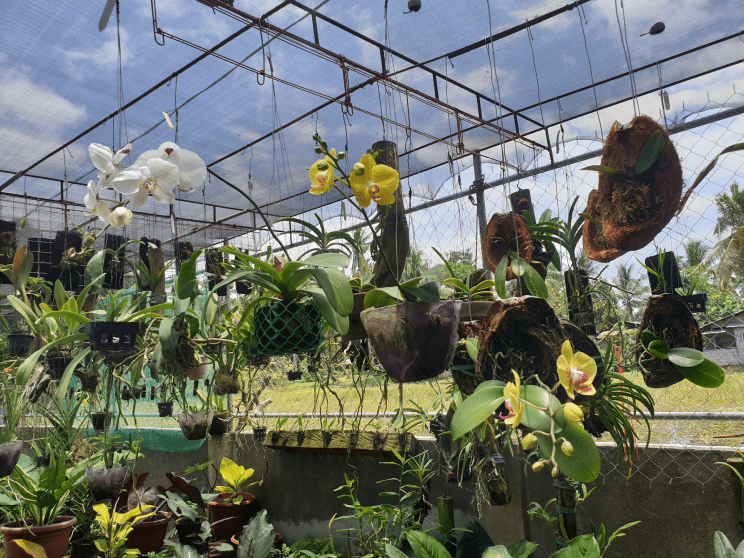 Some orchid varieties in the garden include the flowering Phalaenopsis as shown in the photo, Cattleya, Waling-waling (Vanda Sanderiana), and foxtail orchid (Rhynchostylis).

Aside from orchids, El Paraiso also consists of ornamental plants like philodendrons and fruit trees such as lemon, rambutan, guyabano, and guava.

Caring for the garden

Watering of plants requires Pasion to visit his garden at least twice to thrice a day during the dry season. “Each plant must be watered for at least 30 seconds to a minute. Focus on the body of the plant in the middle and let the water flow down to the roots.” On normal days, he waters the plants at eight in the morning and four in the afternoon. 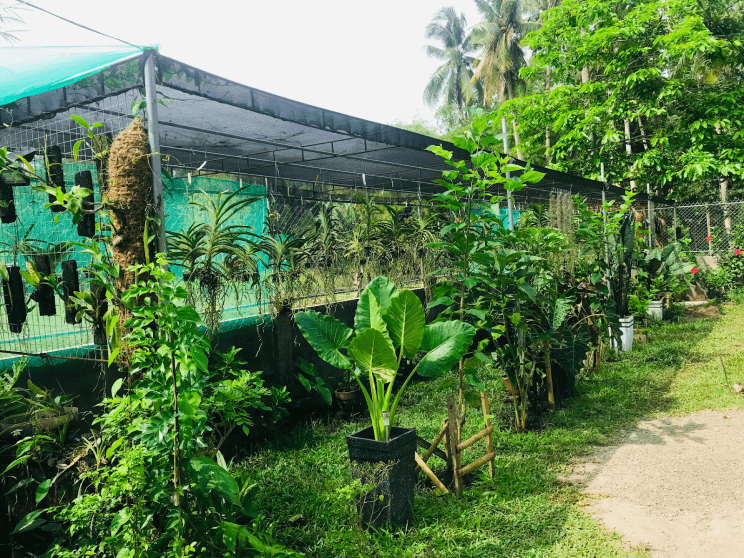 This grower applies pesticides once a month, while he also uses fungicide every week to prevent root and crown rot.

Since Pasion works as a full-time public school teacher, he cannot keep an eye on the garden all the time. To help him keep El Paraiso, he hired his sister-in-law to tend the garden, especially when he needs to report to work. 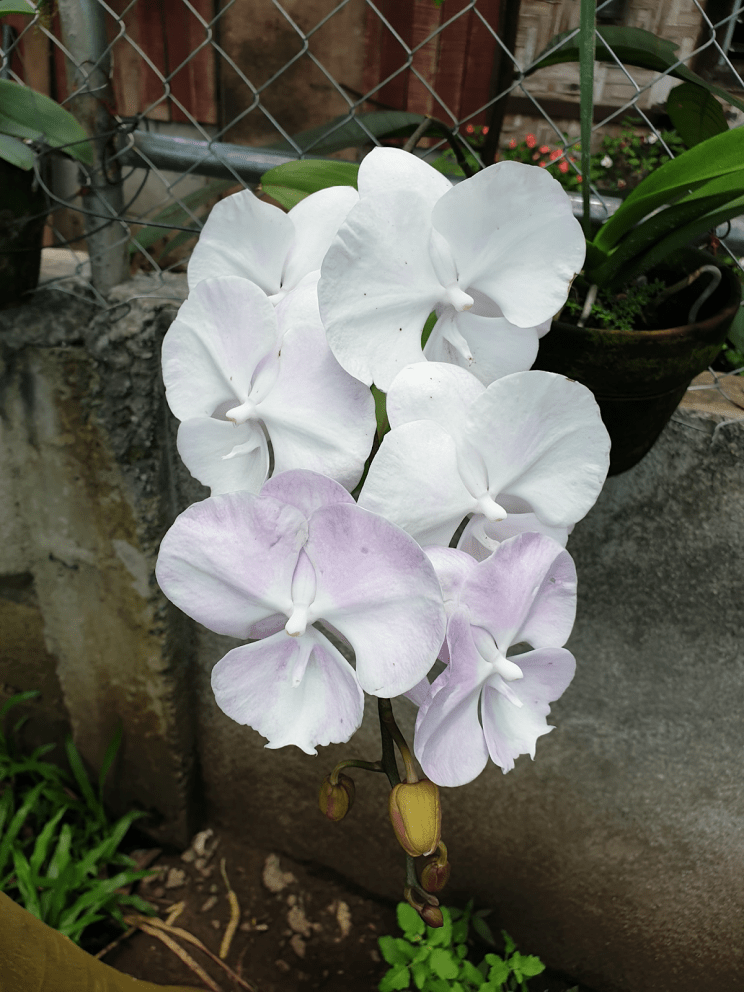 A hybrid Phalaenopsis or moth orchids at El Paraiso.

Putting some plants on sale

Pasion does not prioritize plant selling as of the moment, but he sometimes makes keikis (“baby” or “little” orchids used in propagation), seedlings, and extra plant varieties available for purchase. This way, he can earn extra cash to buy more orchids and gardening materials.

To compensate for the time and effort he exerts in tending plants, Pasion sells strap leaf vanda (with flowers) for P1,500 to P2,000, while his orchid seedlings cost around P350 to P500. “These orchids won’t require repotting anymore [because they are] ready to hang since they are already placed in a pot.”

He explained that he only offers strap leaf vandas with blooms in order for customers to see the actual colors of flowers before buying them. Pasion also does not sell his waling-waling plants because aside from being pricey, he wants to keep and multiply them for his garden first. 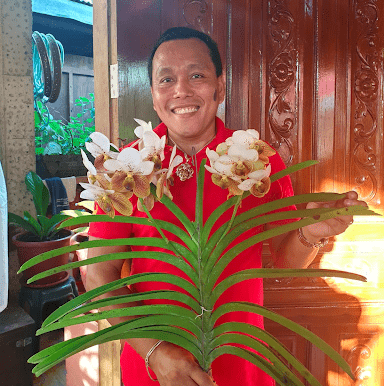 A photo of Pasion with his first Waling-waling (Vanda Sanderiana) he got from Davao taken last August 2020. As of April 2021, he has more or less 50 Waling-waling in blooming, adult, and seedling sizes.

Keeping his hobby and profession

For Pasion, who’s also a part-time instructor in a graduate school, proper time management enables him to accomplish tasks and responsibilities on and off his work. Despite his busy schedule, Pasion ensures to pursue his passion as an orchid grower.

Pasion also started a YouTube channel to promote gardening to a wider audience. His channel, Doc Dhel TV, aims to highlight and show techniques in growing native and hybrid orchids.

For a longtime gardener like him, growing ornamentals is beyond just a hobby. It is an extension of oneself that reflects his love for and skills in gardening.

Read about the requirements needed when growing vanda orchids here.

Photos from Rodelio B. Pasion.

Make mom happy this Mother’s Day with a container garden