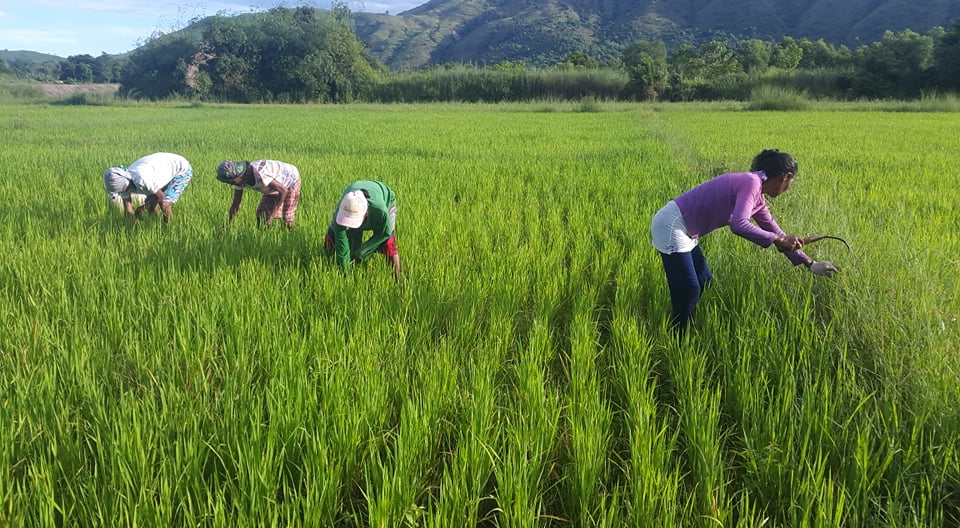 Many Filipino rice farmers have to borrow money at 147% interest a year.

Rice is one of the world’s most important crops, with at least three billion people relying on it worldwide. According to the Food and Agriculture organization of the United Nations (FAO), as of 2018-2019, the Philippines ranked eight in the top rice producing countries in the world, producing 15,025,640.73 tonnes in the said time span. Yet, as anyone who follows the news will tell you, this doesn’t seem to be enough to feed the country, which must rely on imports for it to be rice-secure.

“We want them to focus on a crop that we know is heavily imported so that… it can keep us more content and keep money going around locally,” Dionisio says. “We thought that this one would help them. It travels well and on an economic level, [it’s good] for the people just because it will divert funds from going out.” 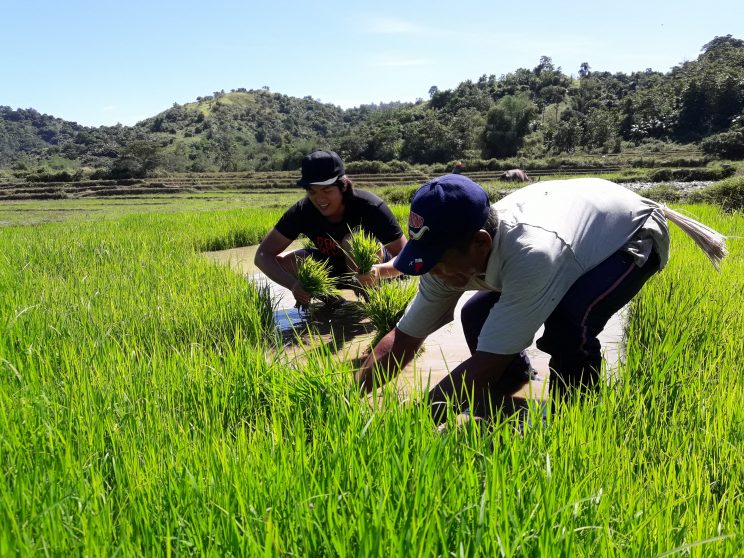 A farmer teaching Dionisio how to plant rice.

The idea first occurred in 2016, when he was setting up MAD Tours with some Aeta communities in Zambales. One of the Aeta tour guides he worked with, floated the idea of planting rice as partners, with Dionisio funding the endeavor and the guide doing all the farming. Unfortunately, they didn’t account for the weather and the rice field ended up flooding. They were only able to harvest four sacks.

The subject of planting rice didn’t come up again until 2020, when the tourism industry worldwide came to a halt because of the pandemic. “Because there were no more travel programs, I was thinking that we can do the rice thing again,” Dionisio says.

This time, they had a better idea on how to go about. With the help of his staff Virgie Amay who was also part of the first experiment, Dionisio partnered with farmer Jesus dela Cruz and another farmer simply known as Mang Domeng to plant RC218, a pandan rice variety, in a total of 1 ½ hectares.

Like his previous arrangement, Dionisio was to provide the financing and the farmers would concentrate on production. The difference is that this would be a partnership and not a loan, and no interest would be charged. “It wasn’t a loan. We’re profit sharing, which is different,” Dionisio says.

To lessen expenses and spread out possible damages, Dionisio asked four families to invest in the project. At first, his friends wanted to donate their investment but Dionisio insisted on treating it as a business venture. The investors would lend the money to the farmers at no interest and they would get their investment back in either cash or bigas (milled rice), and they had the option to roll their investment over to the next planting cycle. 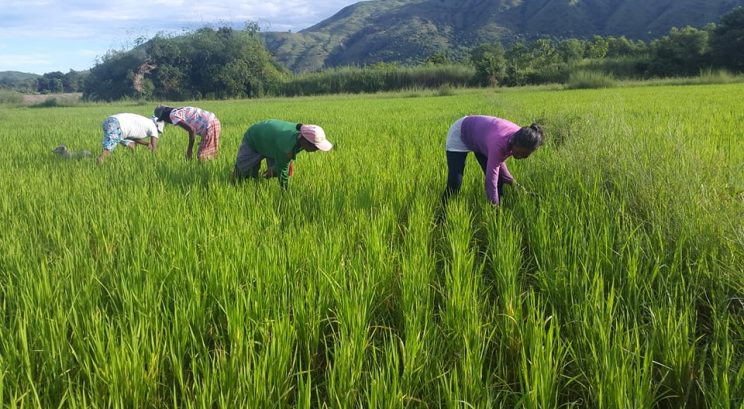 One of the biggest challenges a rice farmer has is access to enough water.

It isn’t just planting and harvesting

This is a huge weight off the farmers’ backs since Dionisio found that most Filipino rice farmers have to borrow money at 147% interest a year. This isn’t their only expense. They also have to rent their drying facilities and pay for rice processing or milling. And since there is usually just one miller in the area, they have little say in how much this costs as well. This shaves off a few more pesos from their profit. “So if you’re a rice farmer and you do everything manually, then you’re generally called inefficient compared to rice producers in other countries who have mechanized everything. Not to mention the irrigation,” Dionisio says.

The harvest was sold online through MAD Market and stocks sold out quite fast. “Reception was good because people like the flavor of the rice because it’s freshly milled and harvested. I think unlike the rice that most people have access to, it was tastier, it was softer. I noticed it, too. I scrutinize my rice more now because I got to taste rice that was freshly harvested,” Dionisio says in Taglish. “I can imagine because supermarkets want to stock a lot so sometimes, the rice you get will be a little older, but this one is just fresh.”

The most important thing Dionisio, the MAD market staff, and their partner farmers learned from this experiment is that producing rice isn’t a straightforward process and the middleman, who has become agricultural shorthand for the boogeyman, isn’t the only factor in how rice is priced for the consumer. “[Many] people think that the middleman [is to blame], but the supply chain of rice is more than just one category making a buck. There are several people that have to touch the rice for it to get to your house,” Dionisio says.

Though the first planting with Jess and Mang Domeng was a success, it was not without challenges, the most important one being access to water. Like many rice farmers, the two farmers had no access to irrigation, so they were dependent on the rainy season. Because of this, they were only able to plant and harvest once. “Last year we planted during one rainy season. The land’s not actually irrigated so we’re at the mercy of the weather versus some of the other farms that have more irrigation interventions all throughout,” Dionisio says. 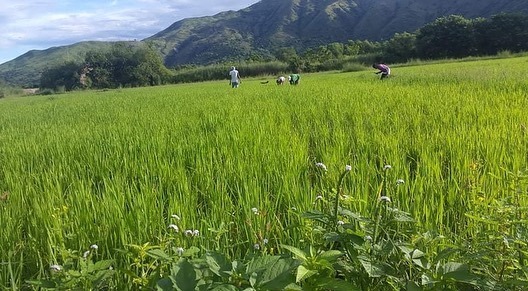 Rice is one of the world’s most important crops, with at least three billion people relying on it worldwide.

The connection between the farm and the forest

The one thing that ties all of MAD’s endeavors together is the forest. A big part of Dionisio’s advocacy involves reforesting the area around Sitio Yangil, and the rice planting project underscores the importance of the forest even more.

It all goes back to irrigation. Dionisio names Bali, Indonesia as a place where proper irrigation has resulted in excellent rice harvests on an annual basis. He also cites local examples such as the rice terraces in Banaue and Batad and the rice fields in Tabuk in Kalinga, and Baler in Aurora.

“With the right irrigation, there are also a lot of savings. Some farmers cannot plant a second season [because of inadequate irrigation]. [They’re] not sure about the weather; it may or may not rain. For those who do a manual irrigation method [or] deep well, what I see about the farmers doing, especially in Nueva Ecija, is that they’ll buy gasoline so that they can fuel their pumps so they can pump out water to the fields. That’s expensive. Basically, the cost of the gasoline is computed in your cost of production for the rice,” Dionisio explains.

“Whereas if it’s naturally rain-fed in an area, your cost is a lot lower and in a place like Baler or Tabuk, where the rain is better because they’re closer to the forest ecosystem, their water flow is good so they’re able to produce at a lower cost also. I’m sure they’ve achieved rice sufficiency within their towns, or maybe even their provinces.

“It’s just something I thought about because in Zambales, water is there but it’s challenging to get it in the right quantities throughout the year because the heat here is extreme. And… the story of rice and… the rest of the agriculture industry is definitely tied to the story of water and the water ecosystems that these farms [rely on].”

This is where forests come in. “I’m just tying it back because the idea that we want to push is that farms are connected to the forest, that’s why alongside these Aetas, while we’re investing in the rice, we’re also trying to grow their forest because water really is one of their major issues that if we can address it, it will just increase the productivity baseline across the board,” Dionisio explains.

“Right now, with the water problem, the only thing we can do is get a pump, you might have to pay for gasoline for the pump, the other one is we plant according to the rains so that leaves us with one… season throughout the year to plant. The second cropping season is more dangerous because the rain is more intermittent and that’s where the storms come into Zambales, September to December. So since 2016, we’ve been doing a reforestation program in Zambales trying to build a forest one tree at a time. This year we were slated to plant about 20,000 trees so that we can continue to improve on the architecture of the forest… If the forest is in a healthy condition, then the water will come to the area.” 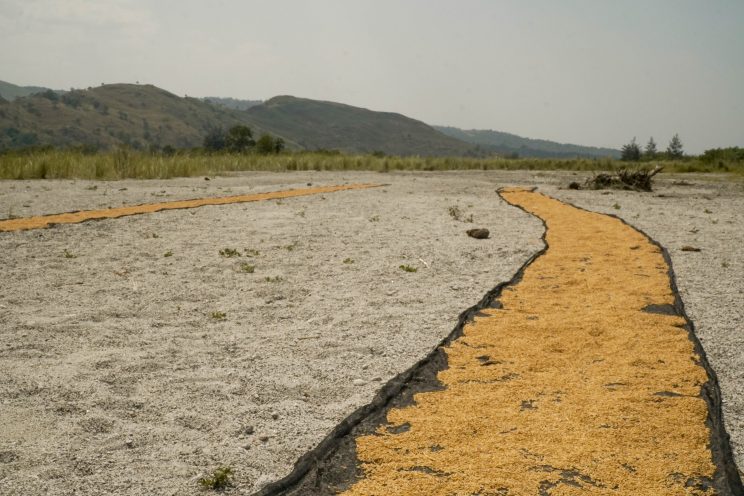 Drying rice in the middle of the valley. Photo by Risa Barcelona

The farmers have benefited from the venture. Not only are they able to take home more pay because they don’t have to pay any interest on their capital, their guaranteed and streamlined market (MAD Market sells directly from farmer to buyer) also means they are able to make more.

“I thought we should continue this. If we’re still in lockdown, then we’ll plant again,” Dionisio says. “And having gone through the whole process from seed to selling, we’ve seen the supply chain of rice [and] where you can really save a lot.”

Jess and Mang Domeng’s successes also mean good opportunities for MAD market. “The best part? We can do farm to table. I’m also very happy with the reception of people,” Dionisio says.

Not only does he plan to continue the project, he hopes to get other groups in the area involved as well. “We have to take this particular story [and] market it locally to get more farmers on board, and this year we wanted to get at least one more community involved. That one community may have three or more farming groups. If we’re lucky, maybe we can get two or three communities involved,” Dionisio says. “At least we’ve tested the supply chain and it’s okay [and] as as long as I can have a trip up there, then maybe we can start selling the rice.”