Bogs is thankful to the all-out support of the local government unit and the office of the municipal agricultural services of Alamada, Cotabato, on their quest to promote organic farming in the community.

“Adopting organic agriculture technology needs a right mind setting, accepting the consequences, consciously considering the arts of gains and losses, and living life within our limits.”

This is the realization of Referendo B. Abrenilla, fondly called Bogs by his friends, a former manager of ready to wear items with stalls in major shopping centers in Davao City who later became a food franchiser in Manila and who eventually turned into a natural farming practitioner in the far-flung Barangay of Pacao in Alamanda, North Cotabato.

“I experienced living in Manila and easily fulfilled my needs. I changed my car often. It was the time when my franchising business on dimsum and food cart concepts was at its peak,” Bogs recalls in Ilonggo.

Although farming was his second priority, rerouting his lifestyle from a buzzling city of Metro Manila to a simpler life in the province was quite an unexpected shift.

“Our franchising business was actually gaining in the metro but because of mismanagement, we ended up paying for unplanned bills instead of gaining profit. Our business lost control of the market and later I gave up the management in 2015,” Bogs recalled.

From metro lifestyle to simple life in the countryside

When asked if he experienced struggle in his lifestyle shift, Bogs confidently said no and that he accepted the change as a way of healing and letting go of his failures, as well an essential opportunity to start again.

“Actually, I am used to managing the family rice field farm in Kabacan, North Cotabato, my hometown. I think that passion in farming is God’s will in my being. This is also the reason that the transition of my career path became easy. Although I missed life in the city, God brought me to this place to inspire ordinary farmers,” he added.

Bogs started practicing conventional methods of farming by raising 1000 heads of broiler chicken in 2016 while at the same time planting yellow corn to a 2.5 hectare area within the vicinity of the P&A Integrated Farm

“My broiler raising ended up a failure during the second, third and fourth loading, in which growth of the chicken was stunted and weights were below the standard weight, [causing us to lose] almost ₱300,000.00.

As per corn farming, in one particular cropping Bogs earned ₱82,000 gross and after considering other operating expenses, he ended up with ₱10,000 earnings after four months of operation, not enough to continue the next farming season. “It was still a failed venture and [due] to these, he opted to stop the broiler raising and yellow corn farming.

In 2019, the extension team of the Sustainable Agriculture and Food Security Program of Southern Christian College regularly visited Barangay Pacao as one of its extension communities on organic agriculture farming and Bogs and his mission partner Ivy Joy B. Antiquera were regular attendees to a series of training and seminars.

“It was a farm style changing experience. I humbly accepted the pros and cons of organic agriculture farming since I experienced the conventional way when I started my stint here. After a few days of training, we got interested and tried the organic farming system,” Bogs shares.

“It was a great experiential-learning with school children in our community. I am hopeful that through this advocacy, the younger generation will be encouraged to appreciate the value of farming and understand the plight of farmers in our country especially in our community, Bogs said. He firmly believes that today’s generation of farmers need an actual farm that highlights the promising technology of the organic agriculture farming system.

Though Bogs is an NC II Organic Agriculture Certified farmer, his farm is still undergoing organic certification, so until then, his farming technique must be referred to as “natural” under RA10068, or the Organic Farming Law. 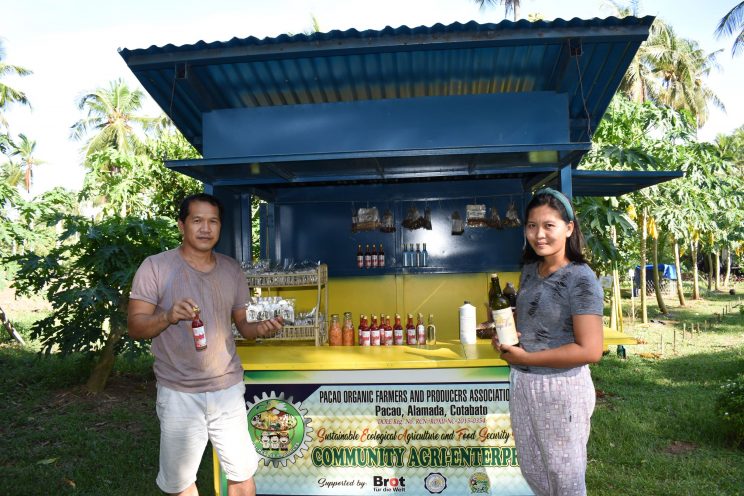 Bogs ad Ivy Joy pose beside the kiosk where their value-added products can be bought.

Bogs clarified this limitation, saying everything is possible if you want it. Options are unlimited and sky is the limit. “Since I lost my earnings in my previous farm investments—from conventional chicken raising and corn farming, honestly, we didn’t have enough funds to start again. With  ₱10,000.00 as startup capital, we started to develop this area [while] embracing [natural] farming. We purchased and planted mongo seeds to a ¼ hectare area purposely for green manuring to enrich and rehabilitate the soil from previous farming practices.

“My elder brother had a collection of vegetable seeds, which I asked for as startup materials.  Also, the SEA training and seminars practiced seeds exchange, thus [it’s] participants’ seed collection was intensified. This practice was replicated among neighbor farmers. This encouraged me to engage in organic vegetable production and nursery establishment. The farm engagement has encouraged few neighbors who were interested to be workforce in the farm, to join the training, and to capacitate themselves in organic farming.”

Bogs considers additional farm workforce as a secondary need because of his current insufficient financial capacity. The few workers who joined the farm operation helped in the farm preparation set-up and the implementation of a simple landscape design with the guidance of Ivy. “We planted additional vegetables, blue ternate, roselle plants, hardwood trees, and fruit bearing trees as shades,” Bogs said.

With this partnership with the farm’s workforce, they were able to earn extra income and establish a local seed bank. “Seed banking is a community-based strategy to collect and preserve locally available seeds [vegetables/fruit and hardwood trees] in the neighborhood,” Bogs said.

“On January 30, 2020, a Farmers Field Day was initiated in our barangay and fortunately, my farm hosted the event. Prior to the event, we were already making by products out of our farm produce. We produced moringa capsules and 3-in-1 capsules made of saluyot, moringa and blueternate powder. To this date, we [have] expand and developed products such as: roselle gulaman juice with peppermint, calamansi tanglad juice, tanglad citrus juice, citrus juice, calamansi juice, cocoa tea made cocoa beans with stevia and peppermint, roselle banana sinamak with peppermint, banana guyabano vinegar, banana vinegar, virgin coconut oil, guyabano wine, mango wine, bignay wine, and our best selling product—guyablue [a combined formulation of guyabano extract and blue ternate or butterfly pea flower extract],” averred Bogs.

After two years of constant farm development, the farm was registered by DTI as P&A Integrated Farm. P (Pepe) & A (Aida) stands for the name of his parents in order to keep their legacy. “My parents taught me that failure is inevitable but success is always possible and attainable.” 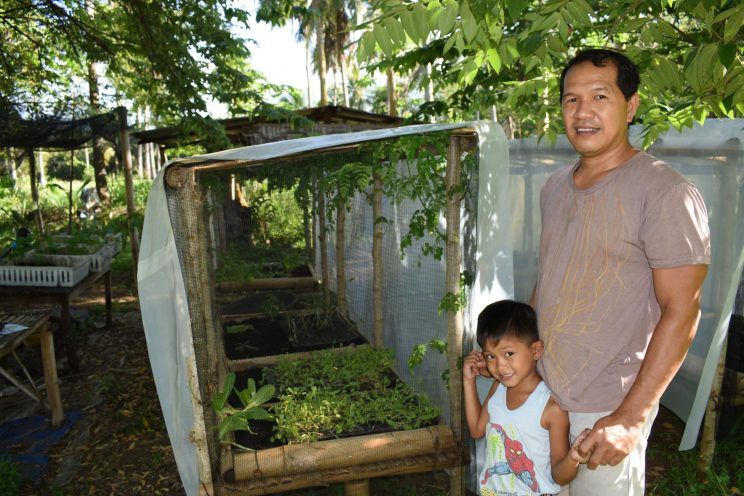 The Challenges and Opportunities on Organic Agriculture Farming

Developing an organic farm in today’s setting is challenging. If a farmer is not committed, they have all the options to shift. “I know that with the modern era of farm technology and agricultural practices, options are everywhere but for me since I accepted this organic farming system in 2019, my commitment started there,” Bogs sincerely shared.

From the start, Bogs recognized that his commitment to organic agriculture does not focus on enough profit, just like his previous business. “I never think of profit with this endeavor and my only goal is to reach out to other local farmers and later help them improve their living conditions through a responsible farming system,” he said.

Among the challenges he identified are: The strategy to maintain the farm set up because the grasses compete with existing vegetables and other plants. The option is to maintain the cutting of grasses and using existing technology like motorized grass cutter, mulching, and regular weeding.

Another challenge is overcoming the temptation of expecting a higher profit. Since natural farming technology does not immediately give high profit, it’s tempting for farmers to integrate conventional techniques.  But farmers have to find strategies such as the need to use other existing crops in the area to help augment other needs.

The process of shifting from conventional to natural farming is actually long and needs a lot of love, discipline, patience, dedication, and commitment. Discouraging comments from some farmers is natural, but a natural farmer has to keep their motivation. This can include keeping the mind-set and values, empowering partners to be responsible and accountable, and encouraging one another despite the challenges. If there is an opportunity like training and field visits, attend these as a couple [with your partner] so you have the same perspective and grounding.

“Our initial engagement and farm adoption of organic farming had convinced and encouraged slow adopters to seriously engage in this farming system. The gradual transformation of the farm led other farmers to re-value the potential of this farming system. Little by little our neighboring farmers in this barangay began to realize that this technique is really possible,” averred Bogs.

All the couple’s hard work paid off. P&A Integrated Farm gained popularity and is now a model for other barangays in the municipality; they see the potential of their own barangays when it comes to organic farming practices. “The local government unit, especially the Office of the Municipal Agricultural Services (OMAS) of Alamada, recognized P&A Integrated Farm as a partner in delivering Organic Agriculture Seminars and Hands-on Training to farmers. This organic farming is strongly advocated by our community through our existing people’s organization, Pacao Organic Farmers and Practitioners Association (POFPA),” Bogs said.

The Pacao community, through POFPA, already received farm implements from OMAS-ALAMADA such as a sprayer, seed sower, 360-egg capacity incubator and setter, 30 heads of anglo-nubian goats, a multi-purpose cultivator/rotavator, and other related farm essentials.

He added that P&A Integrated Farm, now a community demo-garden, introduces the new face of responsible farming to the younger generation by actively involving them during training and even actual seed planting and growing.“I wish and hope that organic farming be integrated in mainstream education, especially at the elementary level,” he said. 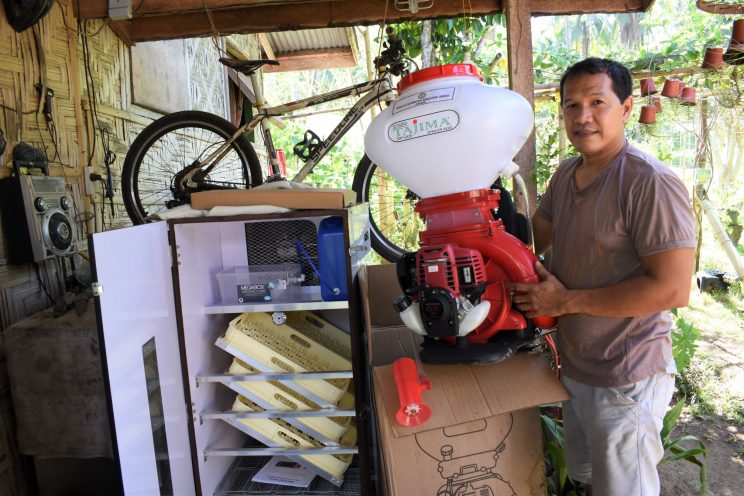 Mr. Referendo “Bogs” B. Abrenilla shows the writer some of the farm implements the farm received from the government.

According to Bogs, P&A Integrated Farm, through POFPA, aims to venture into the buy and sell option for farmers by offering competitive buying and selling rates, producing high grade OPV seeds, producing a variety of organic or naturally-grown vegetables in the Province of Cotabato, and becoming a leading consolidator-distributor of organic vegetables to major cities in Mindanao like Davao and General Santos City.

He underscored further that the key elements to embrace and sustain natural agriculture practices is strengthening the value of Sipag, Tiyaga and Didikasyon/Diskarte/Disiplina [STD] sa buhay.

The entire project initiative of the P&A Farm Integrated Farm is supported by the Southern Christian College through its Sustainable Ecological Agriculture Food Security Program which primary aims to organize and strengthen local farmers on the advocacy of  #sustainableecologicalagriculturefoodsecurity.

From binhi to bigas: the laypersons’ guide to the rice production process