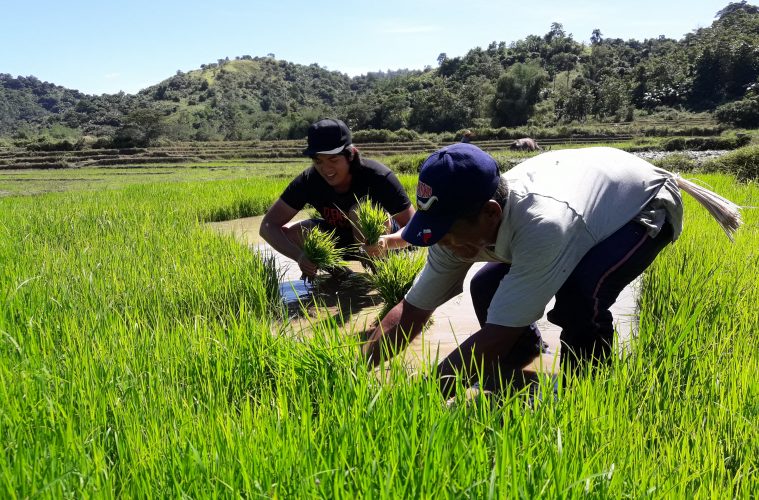 A farmer teaching Dionisio how to plant rice.

From binhi to bigas: the laypersons’ guide to the rice production process

Just what exactly is needed to produce a grain of rice?

Quite a lot of labor and capital.

Despite rice being a staple of the Pinoy dining table, not many Filipinos understand how the country’s favorite grain goes from binhi (seed) to bigas (milled rice).

When Make a Difference (MAD) Travel, his social tourism business was put on hold because of the pandemic, agroforest and tourism entrepreneur Raf Dionisio tried his hand at growing rice. He partnered with two farmers from Sitio Yangil in Zambales, the community MAD Travel works with, to see if growing rice could be a viable business addition to MAD Market, the brand’s farm-to-household online store, and to find out why it’s such a controversial industry.

He breaks down, for the layperson, a simplified process that many Filipino rice farmers go through.

Land comes first. Some farmers own their own land. Others will rent it from a landowner in exchange for a cut of the harvest. The profit share will depend on their negotiations, but is usually between 10-20% of the harvest.

Will there be water? Rice is a water-intensive crop, so the farmer will have to figure out how to make sure their field never dries out. The best way to do this is through irrigation, but since many farmers in the Philippines don’t have access to proper irrigation facilities, they have to rely on the weather. “If it’s natural irrigation, so rain-fed, then they will probably plant in May-June. If it’s irrigated, then they can probably plant most of the year,” Dionisio says.

Prepare the soil. Soil health is a crucial part of farming. The farmer will have to check if the soil has enough nutrients to support the planted crops. If not, it will have to be amended with fertilizer. They’ll also till the field to aerate it. This is actually what is being depicted in those paintings of farmers with carabao-driven plows. Fertilizers will cost money, and farmers often have to borrow from a moneylender at around 140+% interest annually.

See the seeds. Next, the farmer has to acquire seeds. These can be bought or they can sometimes be acquired for free from the Department of Agriculture through the Provincial Agriculture Office. The seeds will be germinated in a small lot before they are planted in the field. The germination happens at the same time as the land preparation.

Time to plant! Once the seedlings reach the desired height, the farmer will transfer it to the field once it starts to rain because rice needs a marshy environment to thrive. “Here, it’s manually planted so the distance and the spacing may be a little prone to human inconsistency, but we do see that a machine would be very helpful with planting, if we can get it, of course,” Dionisio says.

Care and cultivation. While the rice grows, the farmer maintains the field by keeping pests like birds and rats away, as well as making sure their crops are disease-free. They also need to make sure that the rice is adequately watered, and in areas without enough rain, this can mean using gas-powered pumps to pump out groundwater for watering. Paying for gas is another expense.

Harvest time! If the farmer is lucky, they’ll have waited the full 115 days before harvesting. Sometimes an incoming typhoon will force them to harvest a week or two early, but it’s better to have a young harvest instead of none at all. “When you harvest, again, it could be manual, so guys come out with their sickles and knives and scythes or could be machine done, as with other countries,” Dionisio says.

Separate the grain. After the rice stalks are harvested, the grain, which can be found at the tip of the stalk, has to be separated. This is done by a machine, though it can also be done manually.

Drying. “That’s where you start seeing them putting rice on the highway because the highways are absorbers of heat and so they’re good solar dryers in that sense. Or basketball court,” Dionisio says.

Dehulling. This is usually done with a machine, though it can also be performed manually. Filipino fine art is filled with images of this. “[Those scenes where] there’s a big wooden bowl and you’ve got one or two people with big bats grounding on the rice? That’s basically taking out the dried rice husks from the rice field,” Dionisio shares, adding that for the Aetas, this is also the perfect time for young people to start courting.

Separating rice from husks. Again, this is usually done with a machine. Like the dehulling process, husk separation is also a popular subject in Filipino fine art. “Do you know the imagery of the circular bilao and they keep [tossing] the rice in the air?” Dionisio asks. “After you grind the rice hull so the rice seeds come out, you put it in that bilao and you start flipping it so that when you flip it out, the rice hull will fall slower and the rice seeds will fall faster so you’ll be able to get rid of all the rice hull and dust and you’ll only be left with the seeds. There’s a tactic, that’s why it’s not only straight up, it’s [kind of a] forward motion kind of and it’s a dusty process.”

Packing. “After that, the rice is packed into your sacks and you can sell it,” Dionisio says, emphasizing that “the process I mentioned is quite general. It generally has to go to a rice mill to go through a lot of the processing.”

Each step will require funds, either to pay for the product, the transportation, or the warehousing, among other things. Weather can also play a part. A storm, for example, may mean extra time in a warehouse, which also means extra expenses. Delays brought about by the pandemic are another factor.

Money is also required even before planting begins. “The seeds, the land preparation, and the actual planting, fertilizer [and pesticides], and harvesting, those are the five points of cash out because you have to buy your seeds, you have to rent a machine or hire people to till the land,” Dionisio says.

Many farmers borrow money for these, and since they can’t borrow from banks, they have to resort to informal money lenders who can charge as high as 140% interest a year, usually paid through a percentage of the harvest. This is why many farmers stay poor, why they cannot afford to automate, and why they would rather that their children not follow in their footsteps.

This simplified breakdown of the rice production process shows that farming isn’t just planting and harvesting, but a long chain that requires funds and proper planning. Folks like Dionisio hope to one day shorten this chain and increase the income of farmers, both from lessening expenses and interest and increasing yield, to encourage more people to stay in the industry.

An easy way to support Filipino rice farmers is to buy local rice. Another way is to support reforestation efforts, as these will help with the water problem over a long period of time. The easiest way is to avoid wasting food and to gently remind everyone that it takes a lot of effort to grow the food that appears on our plates, even if it’s just a grain of rice.