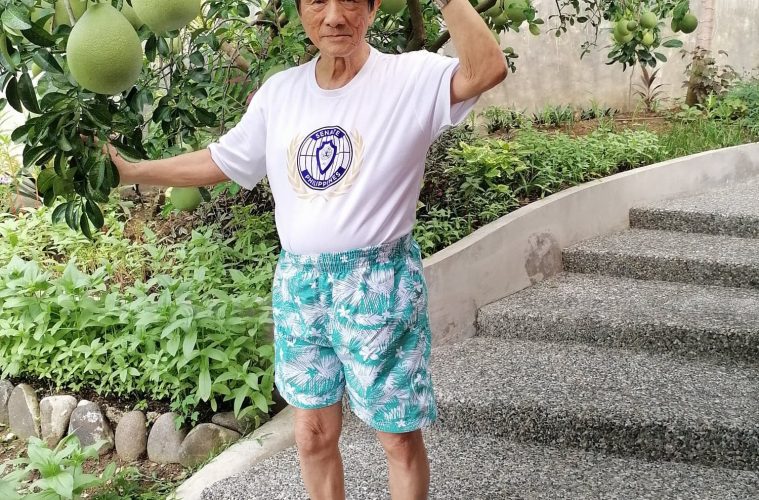 Angliongto underneath his pomelo tree.

The COVID-19 pandemic has almost everyone to shelter in place to curb the spread of the virus. This has resulted in a loss of jobs and opportunities for many people and industries. For others, the forced isolation has given them a chance to discover new hobbies and interests or revive old ones. One of the most popular hobbies taken up during the pandemic is gardening, which has regained popularity due to its stress and anxiety-relieving properties as well as a possible small-scale solution to a household’s food security.

For retired businessman Sebastian L. Angliongto, 85, being forced to stay at home gave him a chance to fall in love with growing food all over again.

A son of Davao

Angliongto was born in February 1936, eight months before Davao became a chartered city. The youngest of three brothers, he lost his mother at the age of six when the Japanese bombed Davao in World War II. He was with his father, Alfonso Angliongto Sr., when the latter was assassinated by a business rival four years later. Angliongto’s father, who hailed from Tawi Tawi, is considered a pioneer of Davao City, and a barangay was named in his honor in 2006.

Angliongto initially wanted to study engineering so he could work in the USA, but his second oldest brother persuaded him to take up agriculture, reasoning that they were planning to shift their family business from shipping to farming. “Being… their youngest brother, I accepted his advice despite not being happy because I wanted to be independent and leave for the U.S.A. to forget from our tragic past,” Angliongto shares.

Though Angliongto graduated with a degree in agriculture from UP Los Banos in 1959, the Davao City native made his mark as the owner of Angliongto Investment and Development Company, a real estate development business that specialized in constructing commercial buildings and warehouses. He is also a devoted family man to his wife Teresita Luy Estrada and their children Jan Carlo and Angeli Therese.

Since Angliongto and his wife are seniors, both have been staying home since March 2020, when community quarantine was imposed in the Philippines. This allowed him to finally put what he learned in college to use.

“With the pandemic, to keep myself busy at home, I decided to develop three garden plots.  My Chinese friend, Tony Tiu, gave me 10 packs of various kinds of vegetables from Mainland China. In the vegetable garden, we have pechay, red lettuce, patola, squash, camote tops, upland kang kong, alugbati and carlan tuber,” he shares. “My wife, Tessie, landscaped the other remaining areas. [They contain] her collection of various kinds of flowers.”

Angliongto’s house, a sprawling bungalow on top of a hill, is located in the second oldest subdivision in Davao City. It was designed by his wife, a trained architect, and sits in the middle of two lots that total 1180 sq.meters. A lot of it has been dedicated to miniature fruit trees. The list of what’s planted sounds like a fruit stall: “one grafted Maharlika rambutan (a popular variety whose flesh is easily separated from its seeds)… evergreen sticky flesh avocado, one Chinese pinkish pomelo, and one rare fruit tree called abiu (Pouteria caimito), which bears fruit that tastes sweeter than star-apple with only two seeds,” Angliongto says. “Abiu bears fruits all year round, [as do the] red and white dragon fruits planted at the back of our concrete fence.”

He’s also planted “a magnolia jackfruit in a half drum filled with compost, a guyabano seedling, and a mango seedling grafted to three kinds of mango scions—a carabao yellow mango, a Florida red mango, and a giant sized Indian mango.”

Anglingto explains how he grows his miniature fruit trees: “It is a technique to develop miniature fruit trees due to limited space by cutting a whole steel or plastic drum into half with their respective half size drum planted in the digged soil hole so the fruit trees, as they grow, their roots will spread downward from the drum instead of going sidewards,” he says, adding that his miniature pomelo tree has produced over 100 pieces of fruit to date. 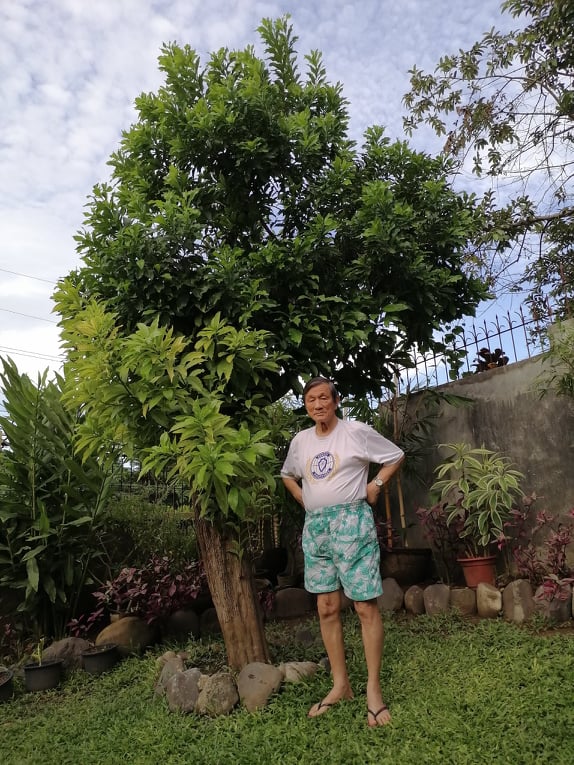 A garden of food

Angliongto explains how he constructed his garden plots: “I elevated the plot, filled [it] with pure compost soil mixed with fertile vermicast,” he says. “The vegetables are all organic without inorganic chemical manufactured fertilizer nor spraying with insecticide.”

To ensure the crops were always sufficiently watered, Angliongto hired a plumber to drill a deep well. “[He] drilled almost 90 feet deep and was able to hit fresh water,” he says. “We installed a 1 1/2 gould pump motor to store water at the water tank to shower the plants every morning if there was no rain in the previous night.”

His biggest challenge is pest control. “Vegetables are sensitive to insect attack. [To prevent this,]  some [crops] are covered with green fishnet. Some I use a blower or water sprinkler to drive [pests] away.”

He also admits that tending a fruit and vegetable garden is time-consuming, but likens it to raising a family. “It is tedious work,” he says. “Vegetables are like babies. You have to take care of the veggies with tender loving care.” 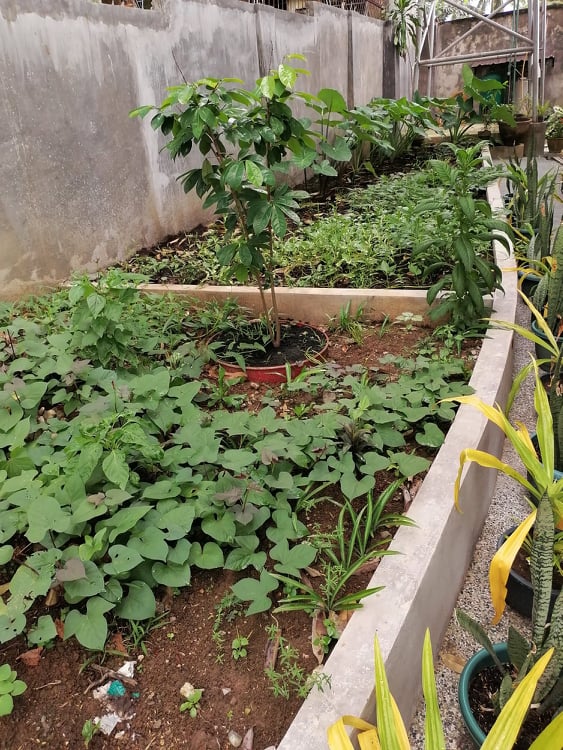 One of the first things Angliongto did was construct raised beds for his garden.

The harvests are all for the family’s personal consumption. “So we do not have to go to the wet market to buy them!” Angliongto says. “Some are made into fresh salad and some for soup and some are lightly fried with ground lean meat or chicken without skin.”

He adds that the family also enjoys fresh fish such as pompano, kitang, and bangus, which they get from his son’s friend, who owns a fishpond.

Angliongto offers some advice for seniors to keep healthy during the pandemic. “With the pandemic, we have to be careful of exposure to COVID-19 from going out. [We should] keep ourselves busy [to prevent] being bored, [and] also to expose ourselves to sunlight and stay healthy by drinking at least eight glasses of water [a day] to prevent dehydration, [especially] with the present summer [heat]. It also helps to stretch our muscles to [avoid] old age pain.” 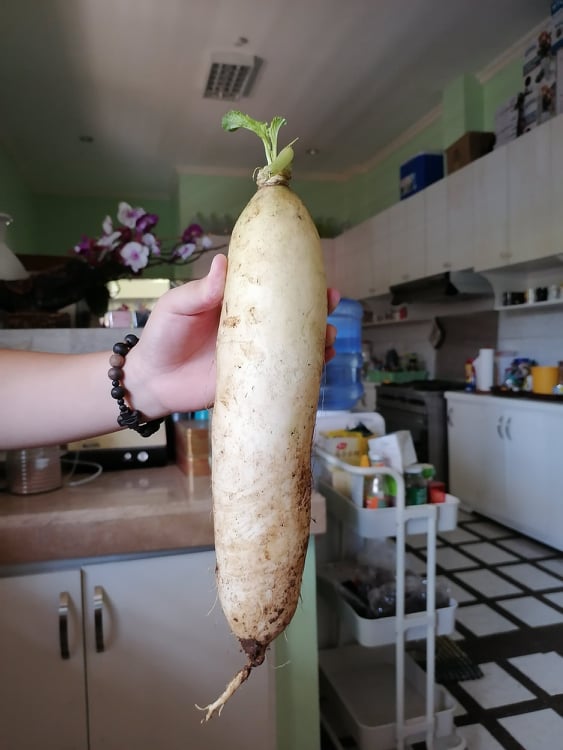 A giant radish harvested from the garden.

Gardening has certainly helped this retired businessman stay fit. He plans to keep growing vegetables, “…and maybe plant pumpkin or kalabasa by letting the vine sprawl temporarily in our grass garden. And also, upo to replace the patola at the trellis above the vegetable garden plot.”

Though he misses going out and longs for the pandemic to end, he’s very happy to have reconnected with an interest from his past. For him, growing food at this time is not just a passion, but also a duty: “With some of my knowledge as a retired agriculturist, what good is it if not to practice what I know at this time?”