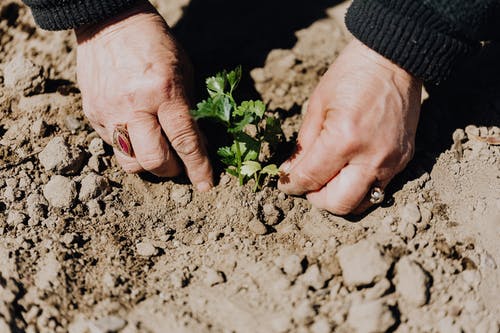 A farmer friend posted a meme of a sign on a farm that said in Tagalog: “Visitors are coming! Lock up your plants!”

Something a lot of farmers deal with that isn’t talked about a lot is petty theft. We’re not talking about sacks of produce or fertilizer or a bunch of landscaped monsteras disappearing into the night. We’re talking about the kind of theft that often goes unreported, the kind that the perpetrators often don’t even know count as stealing.

It’s when visitors see a plant they want to propagate at home and simply pluck a part of it to take home without asking permission from the farm owner (or sometimes, homeowner).

Most of the time, visitors don’t know that this is considered stealing. This is probably because most Filipinos grow up being told that their country is rich in natural resources and that it’s very easy to grow stuff here. It could also probably be because a majority of Filipinos identify as part of the Christian faith (be it Catholic, Born Again, and so on), which teaches that God created everything for man to enjoy. There is nothing wrong with these beliefs, but they somehow resulted in the idea that anything that springs from the ground is free game.

“Surely, the farmer won’t realize if I take a cutting of this,” a visitor might say, not realizing that a farmer knows each and every inch of their farm and can easily tell if someone has taken a part of a plant.

People who live in areas with lots of plant growth, whether it’s organized like on a farm or growing wild like in a lot of provinces have a sense for plants that cityfolk or people not exposed to lush greenery don’t have, and to someone who suffers from plant blindness, this can seem like magic.

Plant blindness, btw, is the phenomenon where humans ignore plants. This can range from not thinking of plants as important to simply lumping everything green into the category ‘plants,’ without giving thought to how they fit into a specific environment or ecosystem. Plant blindness can be dangerous because aside from not placing importance on the role of plants in daily life (not to mention the climate crisis), it can also cause well-meaning individuals to make grave mistakes such as propagating a species that’s not suitable (at best or dangerous at worst) to an area.

But people who are around the same plants daily can tell even if the most tangled undergrowth has been altered in the past few hours. Many people think that this is just something you see in movies, where trackers can find a quarry through the densest forests, but I’ve seen it happen more than once in real life.

For example, a random photographer took a photo of a tree and put it up on a Creative Commons website. A farmer friend took one look at the photo and knew that it was taken on his farm. I once snapped a photo of a roadside creek with a lot of plant growth in Lanao del Norte, just outside Iligan City. An acquaintance from Bukidonon chanced upon the photo and knew exactly where it was taken.

The point of this segue is that no, you’re not being stealthy; farmers know when stuff is being taken from them without permission.

Taking plants without permission is stealing

Farm visitors need to remember that a farmer makes money from what they grow on the farm and that by taking a cutting without permission, said visitor is in theory limiting the farmer’s ability to make a living.

“But it’s just a tiny cutting!” they might say. “There are other plants on the farm!”

True, but one does not know if the farmer had any plans for that said cutting. That’s still taking away from the farm’s potential livelihood, not to mention breaching hospitality rules by stealing from the host.

This kind of (often) unintentional stealing doesn’t happen with poultry or livestock. One does not simply pluck a piglet and take it home. But that’s because people understand that it takes effort to raise a farm animal. You have to house it, feed it, keep it hydrated. Folks have to understand that this is the same with plants. Yes, the Philippines is a fertile biodiversity hotspot where it can be easy to grow many things, but on a farm, crops need to be housed, fed, and hydrated as well. That’s a lot of labor.

More people need to realize that taking plants on a farm without permission isn’t harmless. Besides, it’s not hard to ask the farm owner if one can take a plant home. Not only is it not stealing, it’s part of being a good guest as well.