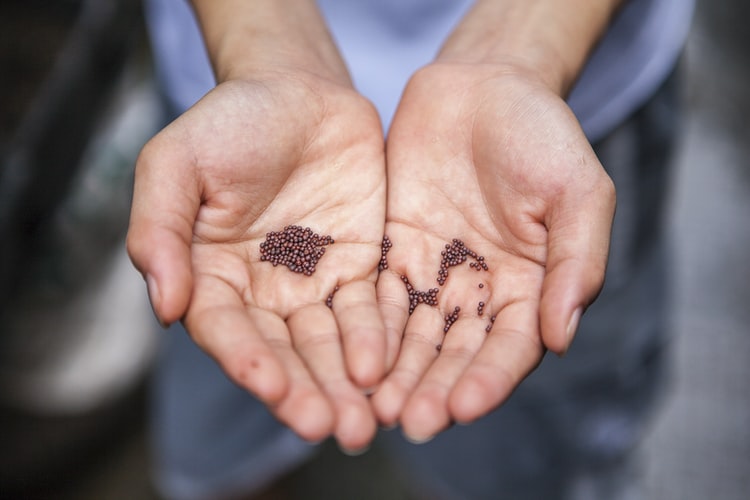 Can saving fruit seeds and scattering them in the wild promote a greener environment?

When the weather in the Philippines gets warmer, this signals the start of the dry season and the season for fruits like mango, durian, and rambutan that consumers can enjoy. And while people are looking forward to eating fresh fruits, there has been a message circulating on social media, urging them to think beyond themselves.

As reposted by several individuals and government agencies during recent years, the message calls people to stop throwing away the seeds from fruits since these will be used in an initiative to grow more trees for the benefit of the environment.

“My request to all of us is not to throw the seeds in your rubbish bin, but INSTEAD to wash them, dry them (in the sun) and pack it in newspaper and keep it in your car. Whenever you go out and find an open barren land while traveling, be it on a village road, on an empty motorway, throw these seeds. They will germinate easily in the coming monsoon,” the message urged. 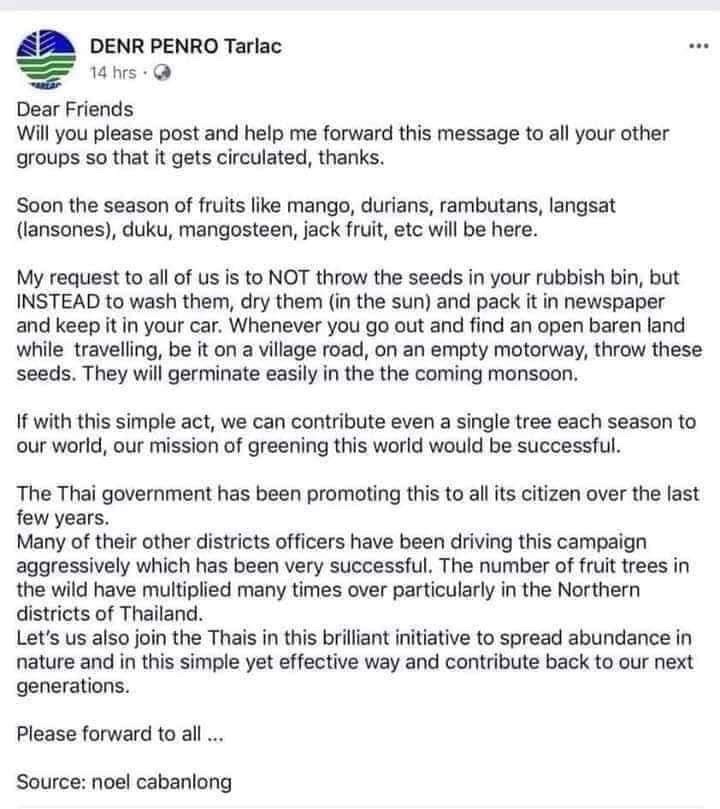 A screenshot of the circulating message on DENR PENRO Tarlac’s Facebook page that has since been taken down.

It added that this simple act can contribute “even a single tree to each season to our world” to help achieve success in the mission of greening this world.”

Promoted by the Thai government

And to give the idea of scattering washed, sun-dried seeds on barren lands, the message also stated that this method is being practiced in Thailand because its government has been promoting the practice to its citizens over the last few years.

“Many of their other districts officers have been driving this campaign aggressively which has been very successful. The number of fruit trees in the wild have multiplied many times over particularly in the Northern districts of Thailand,” the circulating message said.

By adding this bit of information, readers are therefore encouraged to follow in the footsteps of the Thais and “spread abundance in nature in this simple yet effective way and contribute back to our next generations.”

A problem and a solution

The thought of creating lush forests of different fruit trees in the wild by simply scattering seeds on barren lands fosters hope that in a few years, many areas in the Philippines will be abundant with fruit-bearing trees that provide food, shade, and other benefits for future generations to enjoy.

Plus, the method is casual and doesn’t require people to go out of their way.

But some discerning readers who caught a glimpse of the message had other concerns in mind since they think that throwing seeds on empty lots is not the appropriate way to propagate fruit trees.

Aside from the thought that not everyone can have access to barren lands in rural areas, the scattered seeds aren’t likely to survive since these need to be watered regularly to promote growth.

Looking on the bright side, although not all the seeds will germinate, there’s a chance that some will find good soil where they can take root and bear fruit.

There is also the concern of violation of privacy on lands and trouble that property owners would have to face to get permission from the DENR to cut down unwanted trees for future developments.

So how can people contribute to promoting a greener environment for future generations?

One suggestion is that people who eat mangoes, rambutan, papaya, and similar fruits can create the lush forests that the world badly needs today by planting the seeds they’ve saved in select areas that encourage the growth of wild trees.

As the world continues to face the negative impact of climate change, more people are creating ways to combat its effects and preserve the environment for future generations. Planting fruit trees is a good start, especially if they’re grown in appropriate conditions.