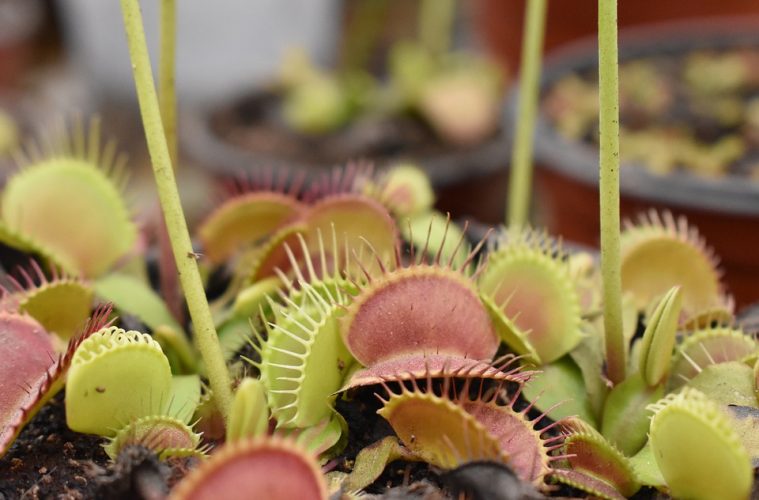 Photo by MarcosJH from Pixabay

Venus flytraps (Dionaea muscipula) are among the popular species of carnivorous plants that gardeners enjoy growing. From its name, the Venus flytrap is known for eating small insects, which is why many people are enthralled with this particular species.

Its “trap” is a modified leaf that consists of two lip-like lobes that are united by a hinge. Nectar within the trap acts as the bait that draws an insect inside. Once it makes contact with the plant’s trigger hairs, the trap closes and shuts the prey inside.

The insect is eventually digested within four to 10 days through the enzymes. After digestion, the trap reopens to lure in new prey. 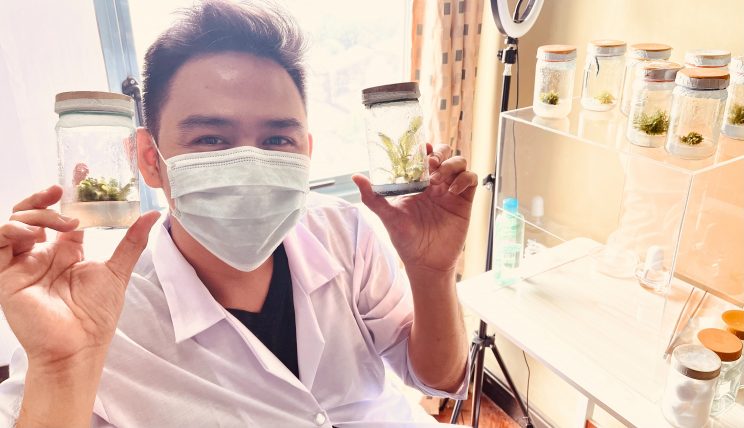 Although Venus flytraps seem otherworldly to most gardeners because of their carnivorous tendencies, they are not difficult to grow. They only have one additional requirement different from that of regular houseplants and that’s sustenance via the prey that they consume.

But there’s another way to grow Venus flytraps, one that includes advanced science.

Dominic Albis Galimba, a plant tissue culture expert, uses the tissue culture method which is a collection of techniques used to grow plant cells under sterile conditions on a nutrient culture medium of known composition.

Galimba has been growing Venus flytraps since 2017 when he decided to buy some plant cultures abroad and clone them in vitro, or the process of culturing cells in a glass. He also grows Waling-waling using the tissue culture method. 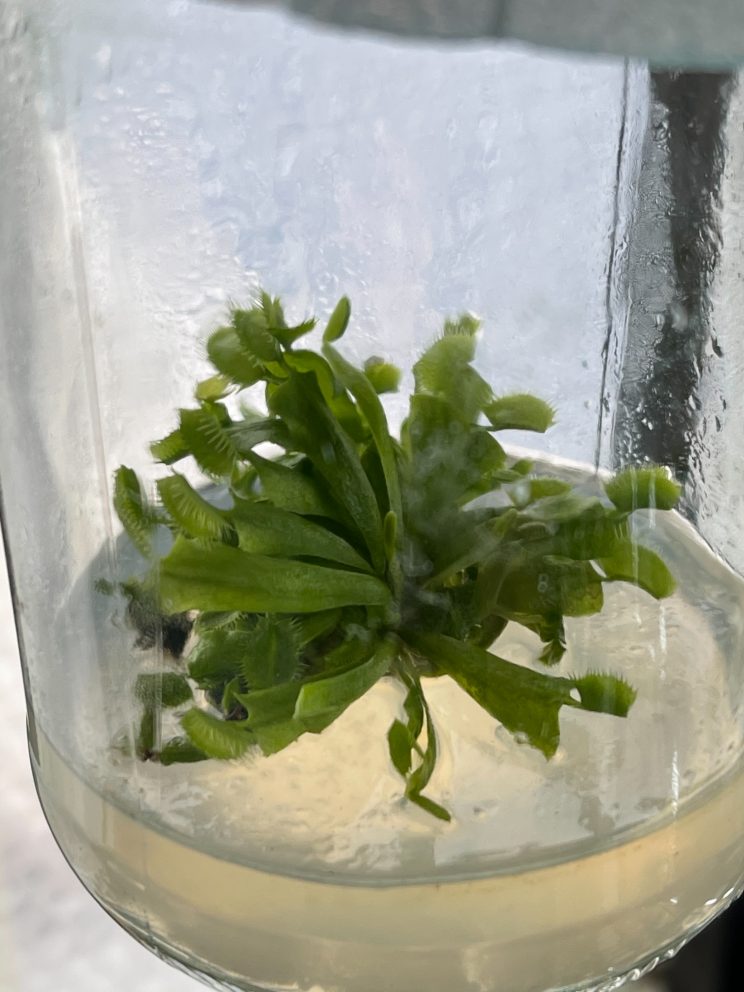 Venus flytraps grown in vitro or in a glass container.

He gets his cultures and seeds overseas, while some of them are bought from other Filipino hobbyists. The rest, Galimba shared, are from his subcultures which he grew using tissue culture technology where he clones plants from their mother plant or seeds to produce numerous clones.

“Proper care of clones is not that hard. You just need to plant it in one-third of Murashige and Skoog’s (MS) medium or our Knudson C modified medium every two to three months with 16 hours photoperiod and not less than 34 degrees Celsius everyday,” Galimba said.

Both the MS and Knudson C modified are known mediums used in the plant tissue culture method. 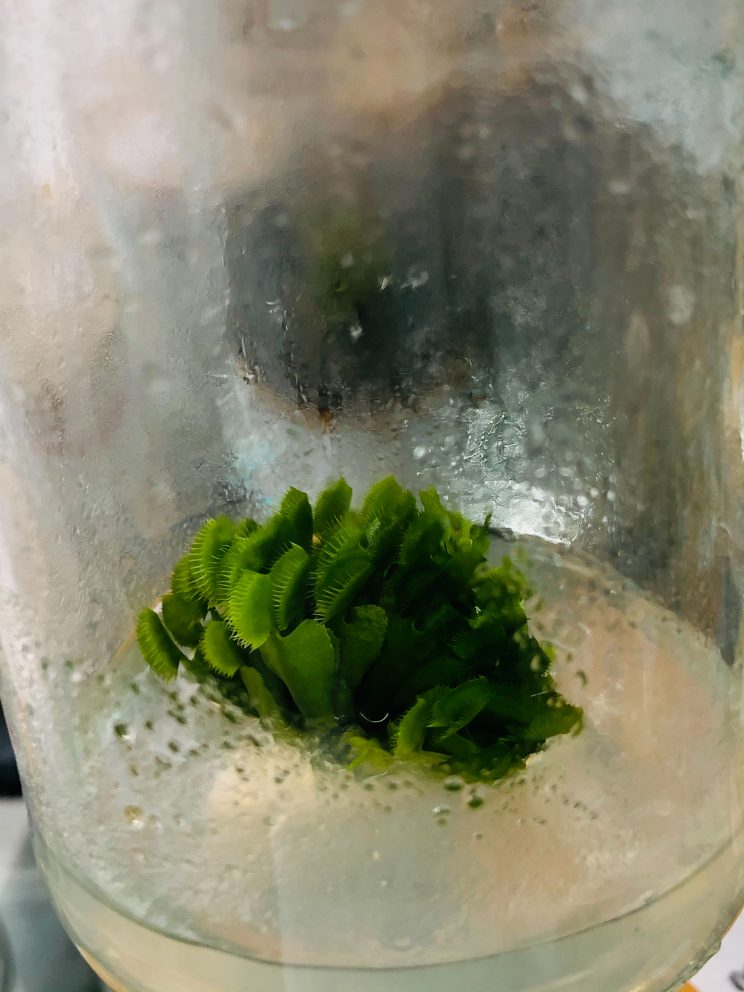 There are specific mediums used to culture plants.

While growing, the Venus flytraps will produce more clones after several subculturing sessions. Subculturing refers to the process of transferring the plants from an old to a new culture medium. Shortly after, the plant will undergo acclimatization where it’ll reduce its relative humidity from 100 percent to 60 percent.

Pros and cons of tissue culture for Venus flytraps

Although it takes a lot more work, and scientific knowledge, than usual, growing Venus flytraps using the tissue culture method has some benefits.

One obvious advantage is that it can produce numerous clones and can be sold at a high price because of the amount of work that was put into making sure that the plants grow healthily and are of good quality. It can even help researchers conduct various experiments related to plants. 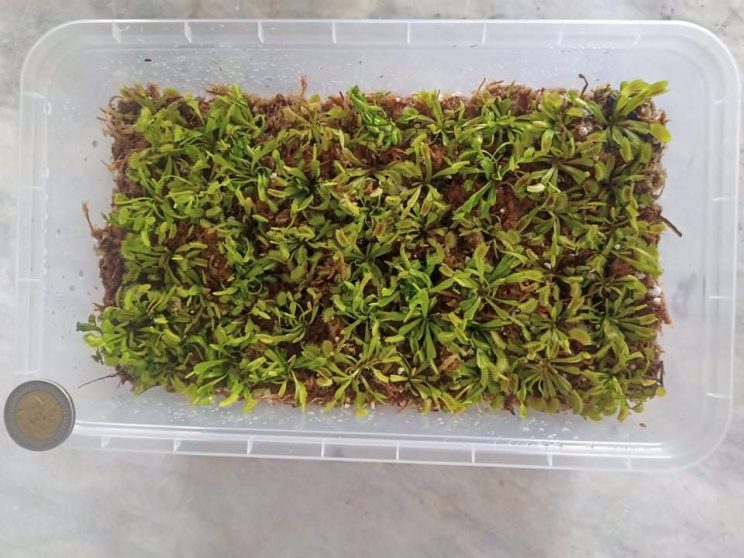 Some advantages of using the tissue culture method is that it produces more clones which can be sold at a high price.

Using the tissue culture method is also space-efficient since it only requires a specific sterile space where the flasks containing the subcultures are placed to grow.

But like with all good things, the tissue culture method also has its disadvantages. The most common problem with using this approach is that it takes too long as compared to the conventional way of growing plants because it takes around one year or so before they reach maturity, as opposed to the usual few months. And it requires more work since subcultures need to be transferred every one to two months.

Another drawback is that there’s a risk of contamination, which is highly likely to happen without the presence of a controlled environment.

Whether it’s the conventional way or a scientific approach, people find joy in growing plants and that’s something that can connect people, regardless of the plants they grow and how they grow them.