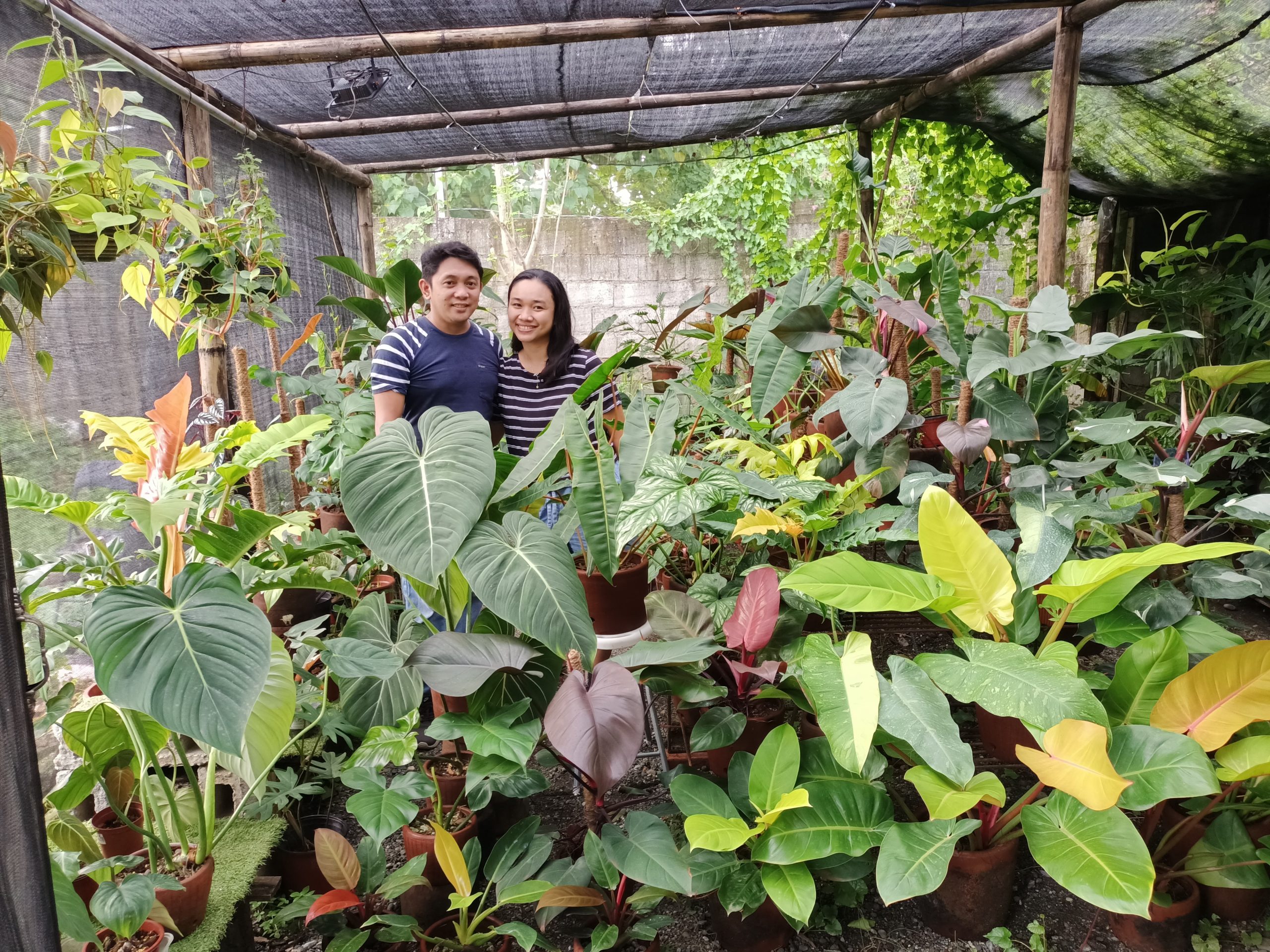 Irish Trogani, 34, events supplier, and his husband Francis have been supplying different services in events since 2015. When the pandemic occurred, they found themselves tending to a garden. After eight months of collecting and propagating plants, they sold more than P100,000 worth of propagations. (Photos courtesy of Irish Trogani.)

Delays and cancellations of plans seemed to be the new normal these days due to COVID-19.

Although people in events management are adept at planning and providing immediate solutions to abrupt changes, these unprecedented life events are beyond their control.

This is a similar case for husband and wife Irish and Francis Trogani, who both work as event suppliers and had to deal with the impacts of the pandemic on their business, especially when face-to-face mass gatherings were prohibited at the height of COVID-19.

The limited event bookings amid the quarantine period allowed them to focus on growing plants. Gardening, for the couple, serves as their way to cope with the stressful circumstances.

Owing to the safety concerns that the health crisis has brought about, the two also had to cancel their travel plans for their wedding anniversary and used the fund and time to build an aroid garden instead.

Irish, fondly called “Maimai Kalamay,” started experimenting with a few plants in May 2020. While exploring different plant species, she became fascinated by philodendrons, which inspired her to learn and buy more varieties. 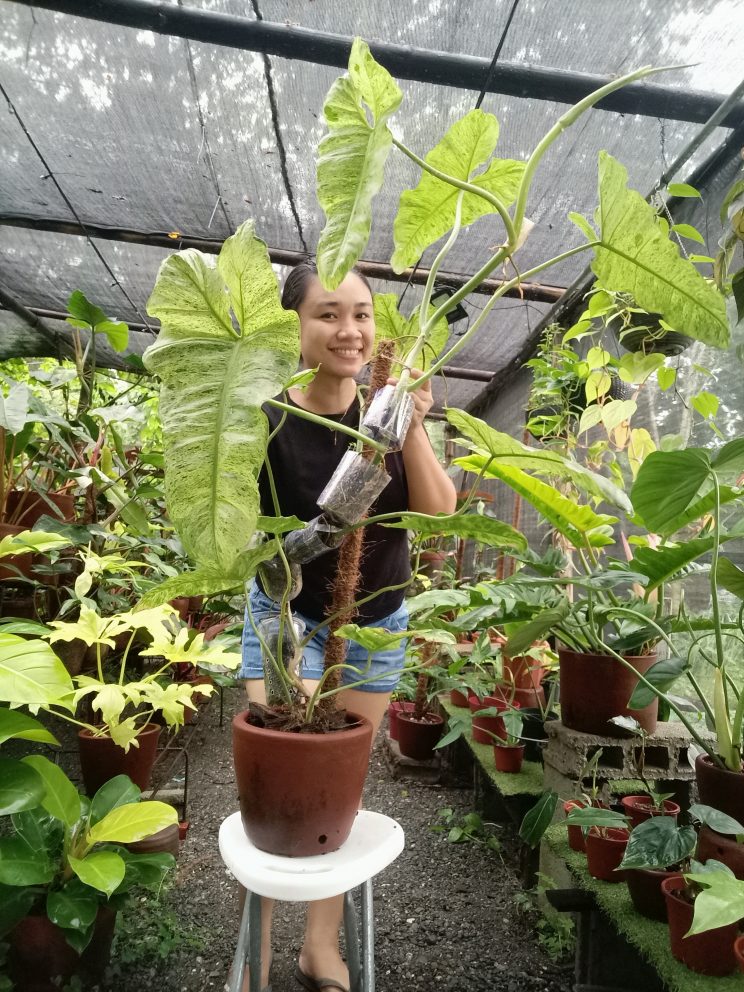 The Troganis decided to fully establish an outdoor garden in celebration of their 10th anniversary last August 2020. The supposed fund for their anniversary trip, which amounted to P50,000, became the starting capital for their garden set-up.

Arumai House of Aroids is an 86.3 sqm garden located in San Jose de Buenavista, Antique. It is divided into a 36.3 sqm garden devoted for most of the aroids and a 50 sqm growing space with net shade where propagated plants are usually found. 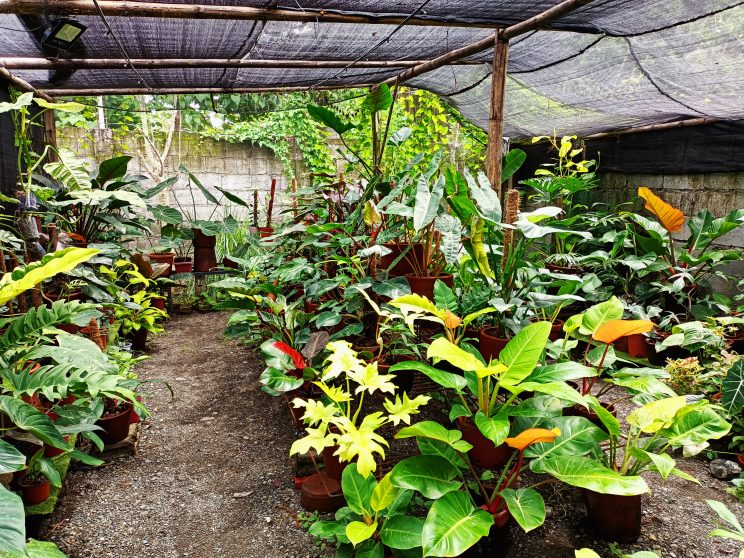 This is one of their two outdoor gardens measuring 36 square meters where most mother plants are placed.

The duo was able to propagate, sell, and earn more than P80,000 by February 2021, six months after they established their aroid garden. “With that money, we bought some rare species to add to our collection and paid our insurance premiums.”

They stopped purchasing plants in May 2021 after achieving the goal of acquiring 100 philodendron varieties. As they progressed, they helped others by sharing their plant experiences over the past year. “We adopted dying plants from other gardens and revived them,” said Irish. This was also the time that they added the separate 50 sqm garden adjacent to their house to accommodate more plants.

“Now, we are raising a P50,000 budget for our landscaping goal this August because it’s the first anniversary of our outdoor garden.” 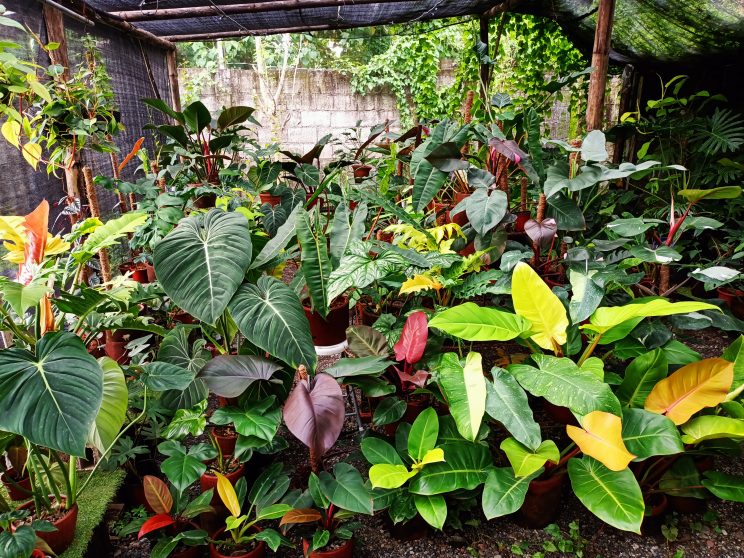 Arumai House of Aroids is a product of quarantine. It is filled with over 100 philodendron varieties and other aroids.

Irish said that she performs air layering (a propagation technique where a branch of a plant is wrapped with a moist medium to help promote root growth) before planting the cuttings for a higher chance of success in propagation and plant stability.

“When I buy juvenile plants, I usually wait for them to become mature or at least semi-mature. I start propagation after four to six months. Then, I keep the top cut and mother plant and sell the mid-cuts with shoots,” Irish added. Prices of the propagated plants range from P100 to P5,000 each.

An aroid garden needs to be fed with rainwater or stocked tap water twice to thrice a week. During summer, misting in the afternoon is necessary, but this routine may change during the rainy season.

With the right shade, potting mix, pot size, drainage, distance, and care, aroids can thrive in any season.

Years from now, Irish and Francis envision a zero-cost garden that will only require constant care.

Although the global health crisis has caused disruptions in the events industry, this husband and wife team remained resilient and continues to rise against the challenges of COVID-19 through gardening.

Read: Antique gardener shares tips on establishing successful a garden business in less than a year