What does agriculture have to do with traditional Filipino tattooing? A lot more than most people think.

But first, a digression:

Tattoos are very personal markings. In modern Western societies, an individual chooses what tattoo they get and where it is placed, imposing their own meanings onto the image. In societies that have a tradition of tattooing, such as in Hawaii and Samoa, tattoos are bestowed as marks of honor on a person. The marks are sacred, and it is up to the tattoo practitioner, who is believed to be divinely guided, which marks the recipient gets and where on their body it will be placed.

The Philippines was one such country once. When the Spanish first arrived, they called what was later known as the Philippines “Los Islas de los Pintados,” or “The Island of the Painted Ones,” in reference to the cultural tattoos its inhabitants wore that made them look like they had been painted on.

400 years of Christianity under Spanish rule has eradicated this practice in all but a few pockets in the country, the most famous one being the Butbut tribe of Buscalan in Kalinga, where Whang Od, the oldest living mambabatok, or indigenous tattoo practitioner, hails from. 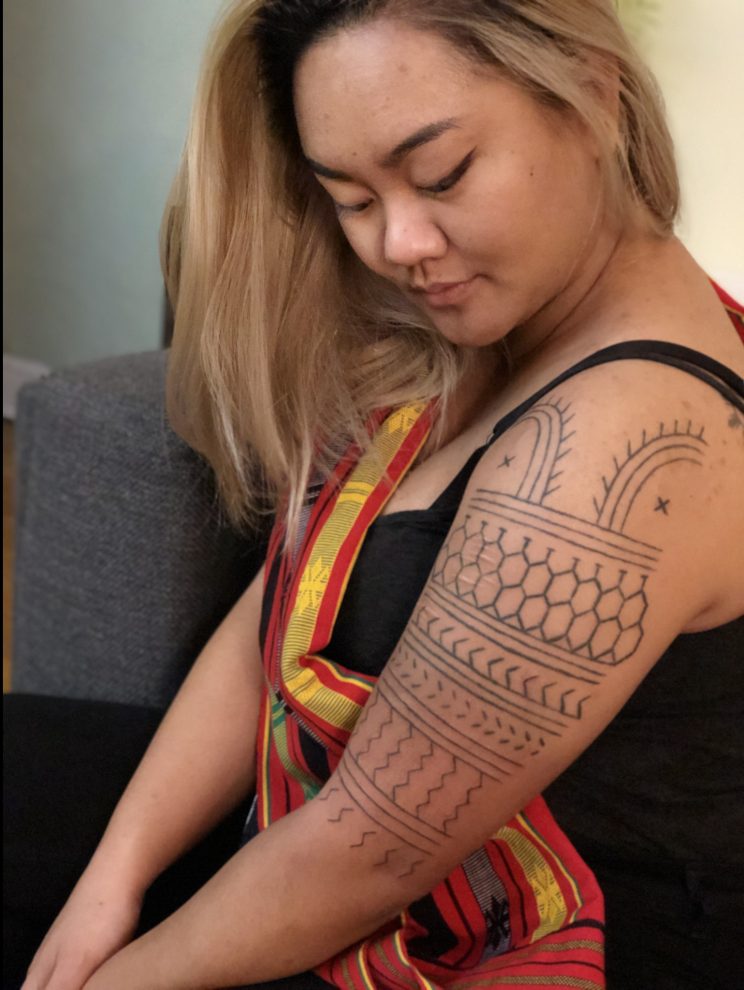 Alpha Sadcopen of Chicago, IL. She is of Bontoc lineage. She has the pang ti’i and fatalong motifs on her arm. Photo credit: Natalia Roxas

For the members of these groups, a tattoo isn’t just decoration. It marks them as a member of the community and communicates their status within it. It reminds them of their roots, wherever they may be.

Indigenous tattooing may have disappeared from most of the Philippines, but some folks of Filipino descent have been studying it, not just in an academic way, but also using it to connect with their ancestry.

One such person is Lane Wilcken, a cultural tattoo practitioner based in Las Vegas, Nevada in the USA. Known as “Manong Lane” to his students and clients, Wilcken has been studying Filipino indigenous tattoo practices since 1989 and has been practicing cultural tattooing since 2012. His hand tapped tattoos use the same method as practiced by the Butbot tribe. 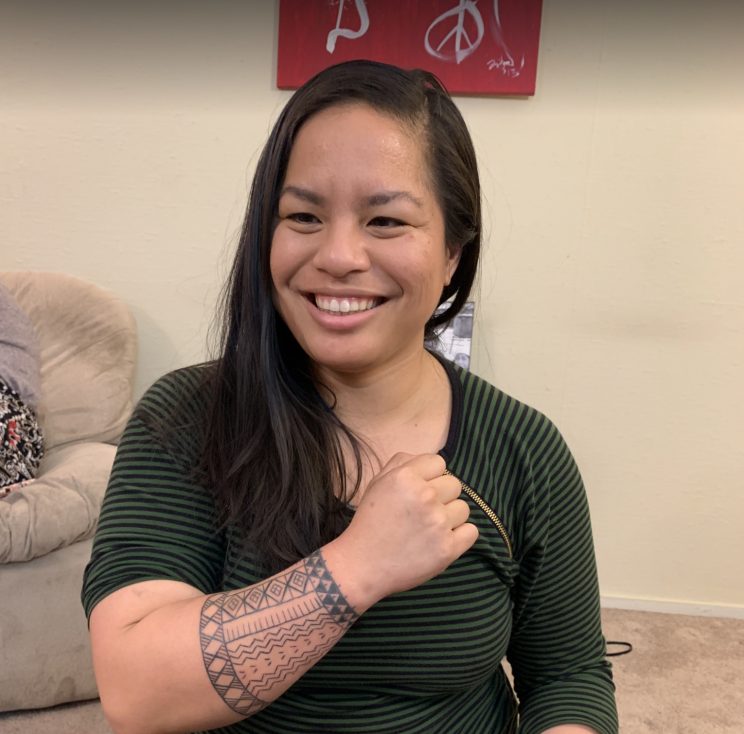 Julienne Palbusa of Oakland, CA. She is of Kankanaey lineage. She has the panyat motif on her arm. Photo Credit: Natalia Roxas

Wilcken explains that though he’s referred to as a mambabatok in the US, it’s not a title that he has given himself, nor is it an honorific that he uses. When asked, he always refers to himself as a cultural tattooist or cultural tattoo practitioner, so that is how he will be referred to in this article. He also explains that his practice is a diasporic one, and that he does not come from a line of mambabatok and is self-taught, though he apprenticed under two different tattoo masters from cultures with living traditions, one from Samoa and one from Hawaii.

He is a second generation Filipino American with British and Scandinavian blood on his dad’s side and Ilocano, Abra, Bontoc, Bicolano, and Tagalog heritage from his mom’s. Though he was raised in the USA, he grew up surrounded by the Ilocano folk beliefs practiced by his mother and grandmother. He is also his family’s mangatang, which he explains is “in Ilocano terms, the person who makes offerings to the spirits and does the prayers for them.”

Because indigenous tattooing traditions have become extinct in many places in the Philippines, Wilcken’s extensive research comes from tracking down often obscure historical texts, as well as “[looking] at how rituals are done among the different ethnic groups in the Philippines that still have a living practice or have a living practice within recent recorded history,” as well as other academic and field research techniques. As a scholar, he is considered an authority on the subject.

The link between ink and agriculture Kymee Burk of Maui Hawaii. She is of Hawaiian-Filipina lineage. She has the Tungkod ng Pari motif on her arm. Photo Credit: Natalia Roxas

“Culture” is attached to “agriculture” for a reason. Historically, a group’s crops and livestock depended on the climate, landscape, and water sources available to them, and all of these in turn influenced the culture, traditions, and beliefs practiced. The same is true with tattooing.

Not only are the tools used in hand-tapped tattooing come directly from nature, there are designs that are inspired by crops as well.

Tattooing materials. First, everything used in hand-tapped tattooing is a product of either cultivation, livestock raising, hunting, or foraging. “The tools for example. We use a lot of kawayan (bamboo) for that, we use boar’s tusks for the teeth or the needles,” Wilcken says.

Wilcken says that in the Philippines and Pacific island nations, tattoo ink is traditionally made from soot mixed with water or sugarcane juice. The ink is left to rest and if using sugarcane juice, the mixture begins to ferment and the resulting alcohol acts as a fixative. Unfortunately, this ink has a short shelf life because if the fermentation continues, the alcohol in the ink turns into vinegar.

The wood used to make the soot is important, as it is often chosen for its spiritual properties. The type of wood differs from group to group and will depend on their local beliefs and practices.

Food offerings. Then there is the alay, or offering. “Batok… symbolizes the relationship that you have or want to have with those that have passed on the other side of the veil of death,” Wilcken says.

Offering food to honor one’s ancestors is part of the spiritual side of the cultural tattooing process. “You’ll have people [who], instead of providing a generous alay or atang (food offering) for their ancestors, they’ll bring day old siopao. They just don’t know,” he says. “Other times, we have people… put out all this food because they really respect and want that relationship with their ancestors again.”

In cultures that still practice traditional tattooing, it is the opposite. “People bend over backwards to honor them… Because they understand how important this is culturally. In the other parts of the Pacific among our cousins, sometimes the cultural tattooist holds a higher position than the chief… because they can spill the chief’s blood. Whereas if anyone else did it, they’d be put to death. So that gives you context of how important the cultural tattooist is. They can spill the blood of royalty. They can spill the blood of priests. Of holy people. Because they have that position. Unfortunately, again, for us, especially in the diaspora, we don’t have that context anymore,” Wilcken explains.

What counts as a traditional offering will differ according to region. Visayans, for example, will offer food without salt, because they believe that salt repels spirits. They will also tend to offer an all-white rooster. Ilocanos, meanwhile, will offer a white rooster with yellow legs.

Space clearing. Cultural tattooing is considered a spiritual practice, with the tattooist in communication with the spirit world. As with many spiritual practices, it’s important to energetically clear one’s space first before practicing any rituals.

Wilcken plants Tungkod ng Pari (Cordyline fruticosa), an ornamental plant used in herbal medicine that is also traditionally planted around rice fields to ward off evil spirits, by the entrance of his home to keep negative elements at bay. Its leaves can also be burned and the smoke used to clear a space of negative energy.

Guava leaves can be used to clear a space the same way. Sometimes, garlic is used as well. The latter is well-known in popular culture as a repellent for supernatural creatures, particularly aswangs, and lives up to its reputation. “We don’t think about garlic as being a spiritual protectant. We don’t think about ginger or salt for its spiritual properties,” Wilcken says. “But all that is still there. It’s still there in the foods that we grow, it’s still there in the recipes that we use.”

Tattoo designs. A lot of indigenous tattoo designs have to do with crops, which usually signify fertility and abundance. Wilcken offers three examples.

First is the panyat, a rice bundle found in designs from Kalinga. “When you tie the bundes together, it forms a rough hourglass shape. That represents abundance, but you have to think about, too, is why do you have rice? Why did you have an abundance of rice? It is because you’ve pacifed or appeased all the deities for the rice,” he says.

Next is the pang ti’i from Bontoc. “The ​​pang ti’i just looks like a bent chevron attached to a line. It represents the rice plant when it’s heavy with grain. Some of the connotation there is to receive the blessing, you must be humble, bent down like the rice plant, willing to submit to the heavy grain that is put upon you,” he explains.

Last is the falatong, a bean design from Bontoc, which is derived from the story of how the god Lumawig found a wife. “It shows that men and women must share the burden,” Wilcken says. “It goes back to this oral tradition of who these progenitors were that the story came from and where the concept originates. And again, it revolves around agriculture.”

Modern living, particularly urban living, has made many people forget the link between agriculture and virtually everything that has allowed human communities to flourish. The importance of agriculture, however, remains strong in traditional practices such as cultural tattooing.

As Wilcken says, “Those industries of farming, fishing, animal husbandry were very big parts of our lives in the past and of course it’s represented in our batok.”

How to keep your plants alive when you’re away