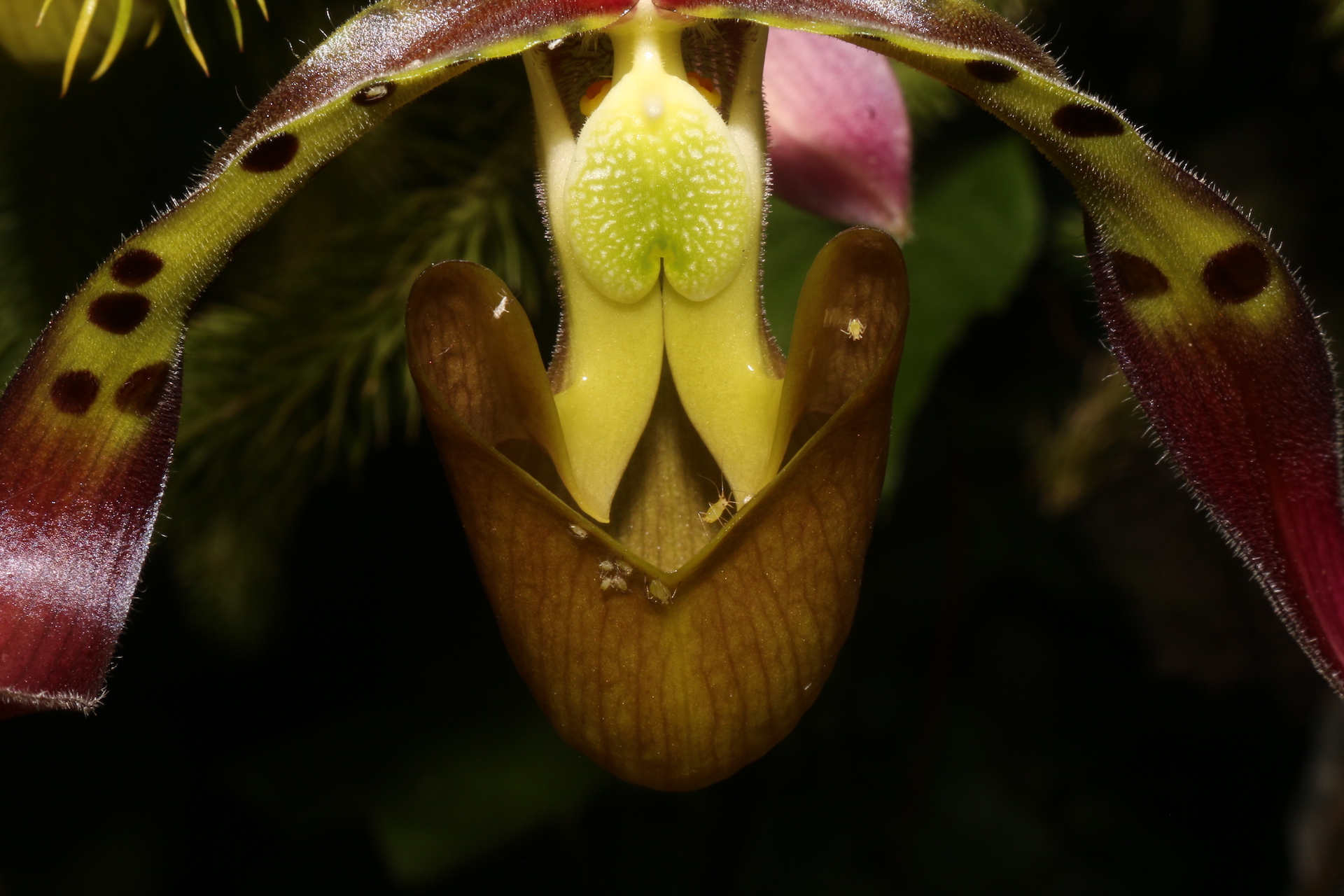 A P. haynaldianum salvaged from a cut tree was found in a garden near Mt. Busa in southern Mindanao.

Two wildlife biologists found a Pahiopedilum haynaldianum, also known as lady’s slipper orchid, in a “local garden in the village adjacent to the forest somewhere in the Mount Busa Key Biodiversity Area.”

“When we are conducting biodiversity assessment, we also look for salvaged plants in local gardens, hoping to find a species that we have not yet recorded in the wild,”  Pitogo says. “And that’s what happened with the Pahiopedilum haynaldianum.” 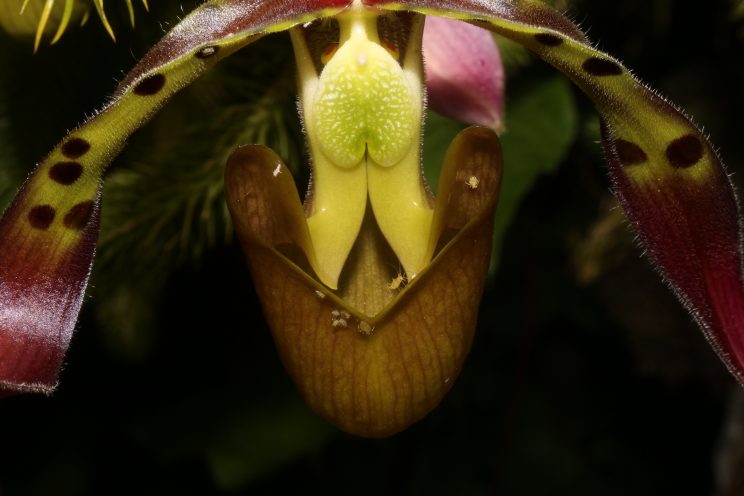 A P. haynaldianum salvaged from a cut tree was found in a garden near Mt. Busa in southern Mindanao. (Aljohn Jay L. Saavedra)

Pitogo explains a bit about the found specimen. “The genus Paphiopedilum or known as lady’s-slipper orchids (named so because of their unique floral pouch) are a semi-terrestrial group of orchids with elaborate flowers, thus it is a favorite for enthusiasts. It comprises about 16 species occurring all over the Philippines, most of which are classified as Critically Endangered in the Philippine Red List (DENR DAO 2017-11),” he says, adding that, “P. haynaldianum is also classified as CR. It is endemic to the Philippines and occurs in several localities, mostly in Luzon, with some records in Negros and Mindanao. Its occurrence in Mount Busa KBA is probably the southernmost distribution of this species.”

According to the local who showed them the specimen, the orchid was salvaged from a fallen tree in the forest. “The orchid was not flowering at the time, so they did not know what the flower would look like until it bloomed,” Pitogo says.

The find came as a surprise to the scientists because they hadn’t encountered this specific species in the wild. “It is a first for us and for Mt. Busa KBA,” Pitogo says.

Widespread, but not a guaranteed find

According to Pitogo, “P. haynaldianum is widespread in the Philippines but has a localized distribution. It grows naturally on rocks and tree trunks from 0 to 1,500m in altitude.”

Despite this, finding out that a specimen started its growth in the forests of Mt. Busa was surprising because of many factors, the two biggest of which are the fast receding natural forest cover due to human activity and because of poaching, which has been reported to have scaled up considerably during the pandemic. 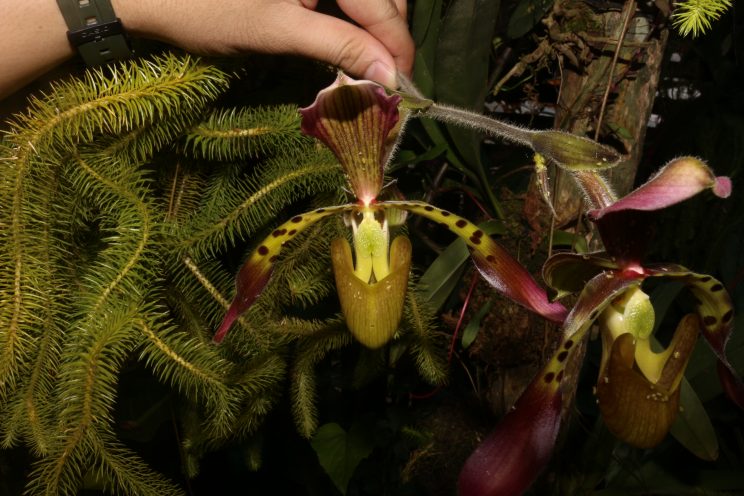 A P. haynaldianum salvaged from a cut tree was found in a garden near Mt. Busa in southern Mindanao. (Aljohn Jay L. Saavedra)

The need to conserve wild spaces

What makes this find important? Not only is the whole mountain range home to rare plants and animals, many found only in that specific area, Scientists believe that the range still contains many species of both flora and fauna that haven’t been discovered yet.

READ: Mt Busa: An area that needs to be protected

The P. haynaldianum is but one of Mt. Busa’s many orchids that Pitogo and Saavedra have been cataloguing with the hope that it would encourage future monitoring and conservation programs within the KBA. “There are ongoing efforts to declare this KBA a protected area under the Philippine National Integrated Protected Areas System (NIPAS), thus any information that could support this effort is valuable,” Pitogo adds.

While they haven’t come across it in the wild yet, he says that it’s highly possible that they might do so in the future, especially if the area remains protected.

“Mt. Busa KBA is 114,882 hectares and we have only been to a few sites. We expect that more orchid species could still be recorded if we can penetrate the deep forested portions of this KBA, one of which is P. haynaldianum. Although we already included it in our orchid checklist, a wild plant is still something we want to see and photographed,” he says.

Why conserving Mt. Busa is important

Everyone knows conserving natural spaces is important, but not everyone can articulate why.

Pitogo explains: “Humans largely depend on the natural environment, so it is imperative that we conserve wildlife and their habitats, which provide important services for our survival. Nature and biodiversity protect us from the effects of climate change and, more importantly, prevent a looming pandemic from happening—again.”

It is  important to conserve areas like Mt. Busa in particular because the range remains relatively untouched by human activity compared to other areas in the country. Aside from housing rare and endemic plants and animals, it also brings a lot of benefits to mankind.

“In the case of Mt. Busa KBA, it is a major watershed that hosts one of the largest primary forest blocks in southern Mindanao, which provides water, food, and clean air to the people of Sarangani, South Cotabato, and Sultan Kudarat Provinces. It also helped shape the unique cultural heritage of the indigenous ethnolinguistic groups in southern Mindanao, particularly the T’boli,” Pitogo says.

“Protecting and conserving Mt. Busa KBA not only ensures that its more than 700 wildlife species thrive for the next generations to witness but also preserves the rich and complex interactions of the cultural and natural landscapes in the region.”