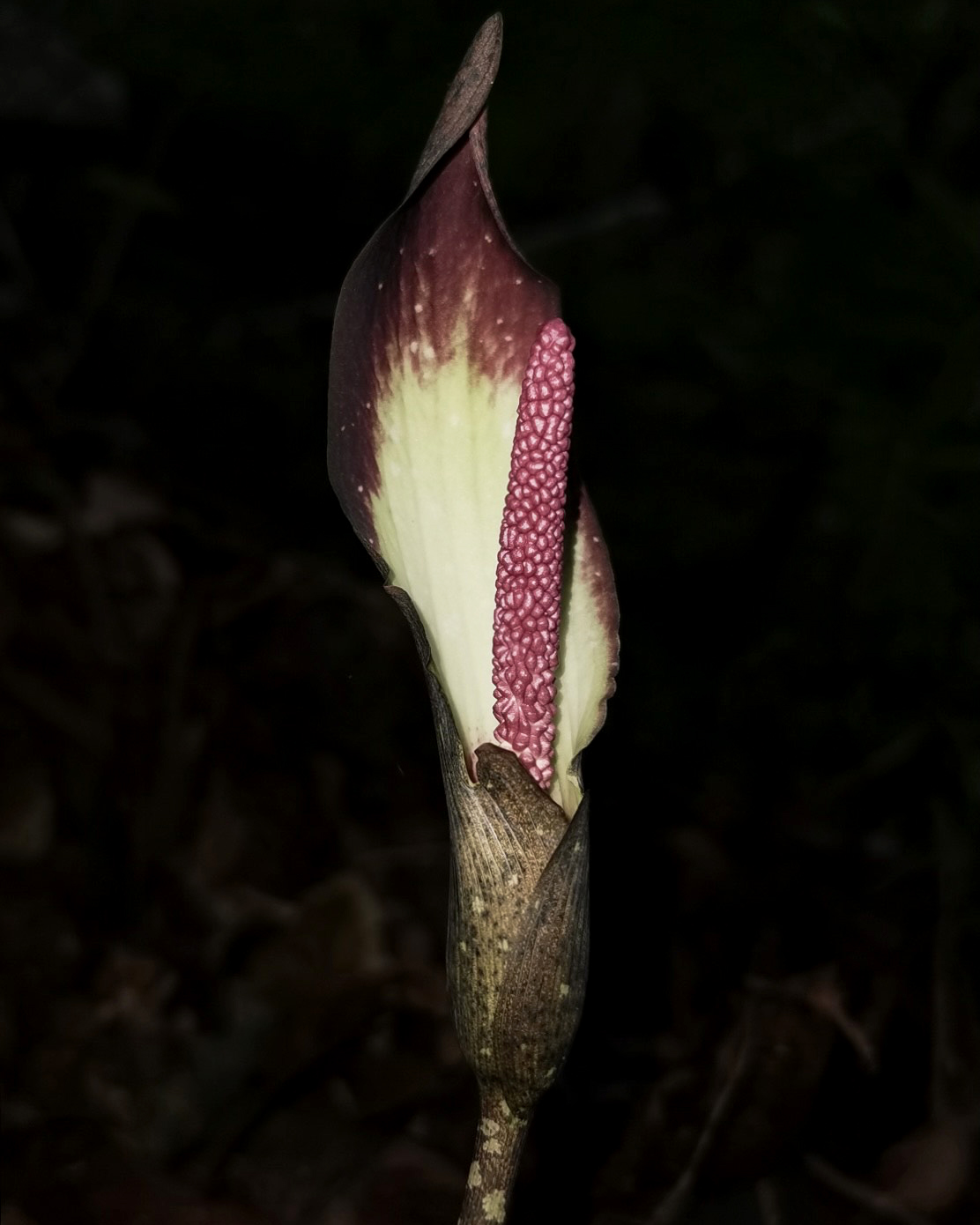 Amorphophallus minimus from Nueva Ecija has been declared a new species of corpse flower.

Philippine Taxonomic Initiative (PTI) has identified a new plant species, Amorphophallus minimus, in Nueva Ecija and its description is now published in the peer-reviewed Nordic Journal of Botany as of September 1, 2021. Plants from the genus Amorphophallus are commonly known as “corpse flowers” due to their particular odor. Including the new discovery of A. minimus, the Philippines now boasts 17 known endemic Amorphophallus species.

Amorphophallus minimus was first discovered by Leonardo Udasco Jr. years ago, and was recently rediscovered and determined unique by Rene Alfred Anton Bustamante, Executive Director of PTI, who found the plant during a biodiversity assessment at the Pantabangan-Carranglan Watershed Forest Reserve (PCWFR) in Nueva Ecija. The expedition was funded by citizens from the Ayala Alabang Village gardening group AAV Biophiles, as well as the artist Isen Alejo. 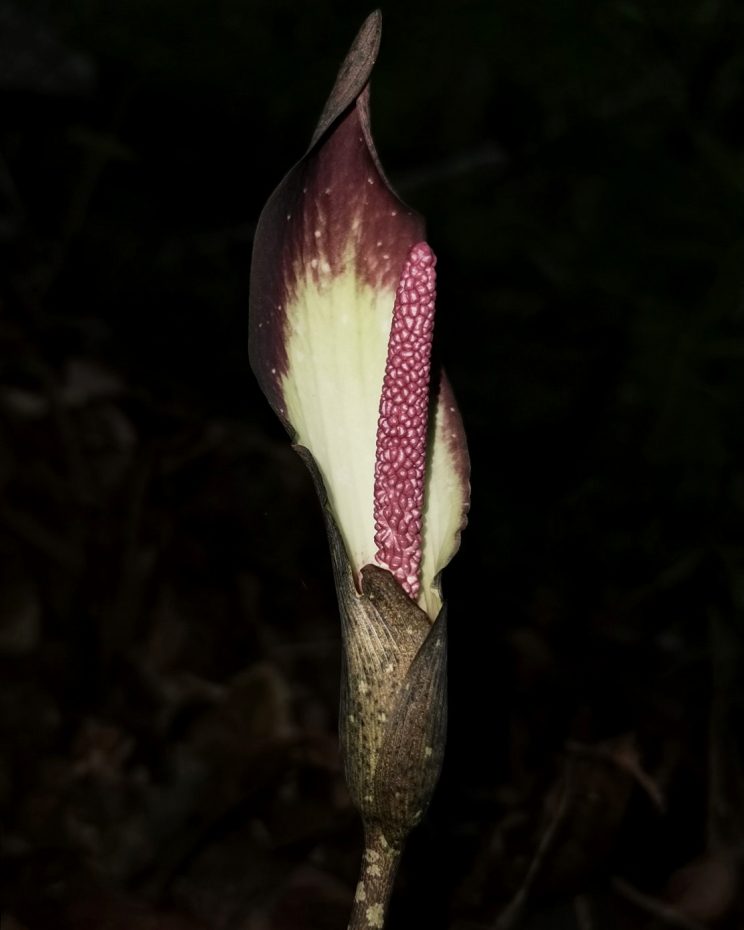 Amorphophallus minimus from Nueva Ecija has been declared a new species of corpse flower.

Amorphophallus minimus resembles A. palawanensis but is easily distinguished by its club-shaped appendix with small bumps, contiguous with a male zone, oblate stamens, leaf bulbils, and overall small size. The plant’s new name alludes to its relatively small stature compared to other examples of Amorphophallus.  The full description of A. minimus, distinction as a novel species, and its official name have been accepted by the scientific community through a paper authored by Rene Alfred Anton Bustamante, Cyrille Claudel, John Charles Altomonte, Leonardo Udasco Jr., and Maverick Tamayo.

“A member of the popular Araceae family, plants in the genus Amorphophallus produce some of the most spectacularly beautiful, albeit smelly, inflorescences in the world. The Philippines is home to a number of these elusive species. Who knows how many are left waiting to be documented and smelled?” said co-author Altomonte.”

Populations of Amorphophallus minimus were found in the montane forest of PCWFR, near seasonal bodies of water amongst heavy leaf litter and high organic matter. The pattern on the petiole of A. minimus, resembling lichens growing on neighboring trees, is hypothesized to serve as protection against herbivores such as the Philippine warty pig. A. minimus is also the only known corpse flower in the Philippines found to inhabit a montane forest at a higher elevation than what is common for Amorphophallus.

This is the fourth Philippine Amorphophallus recently described in the past two years, and the second discovered by Bustamante and PTI who also had A. caudatus from Camarines Norte published last year in November, 2020. This trend suggests that more unknown and unidentified corpse flowers may have yet to be found in Philippine forests.

“I was ecstatic when Leo Udasco first showed me this species. It was by far the smallest Philippine Amorphophallus and from the highest elevation recorded for a Philippine specimen. The fact that it was the first species with a rough appendix that I’ve seen (before A. caudatus was discovered) made me all the more excited,” said Rene Alfred Anton Bustamante.

While PCWFR is a protected area, it is currently experiencing illegal logging, poaching, and pollution. Climate change is another threat to Amorphophallus minimus and other rare plants in the Philippines. Due to the limited range and scarce populations of A. minimus, PTI recommends listing this precious corpse flower as Critically Endangered according to the criteria set by the International Union for Conservation of Nature (IUCN).

“As per my assessment, A. minimus is the most threatened species in its genus in the Philippines, observed only from four sites with less than 50 mature individuals. Area is threatened by mining, illegal logging, ‘kaingin’ (slash-and-burn agriculture), landslides, typhoons, and wildfires,” said co-author Maverick Tamayo. 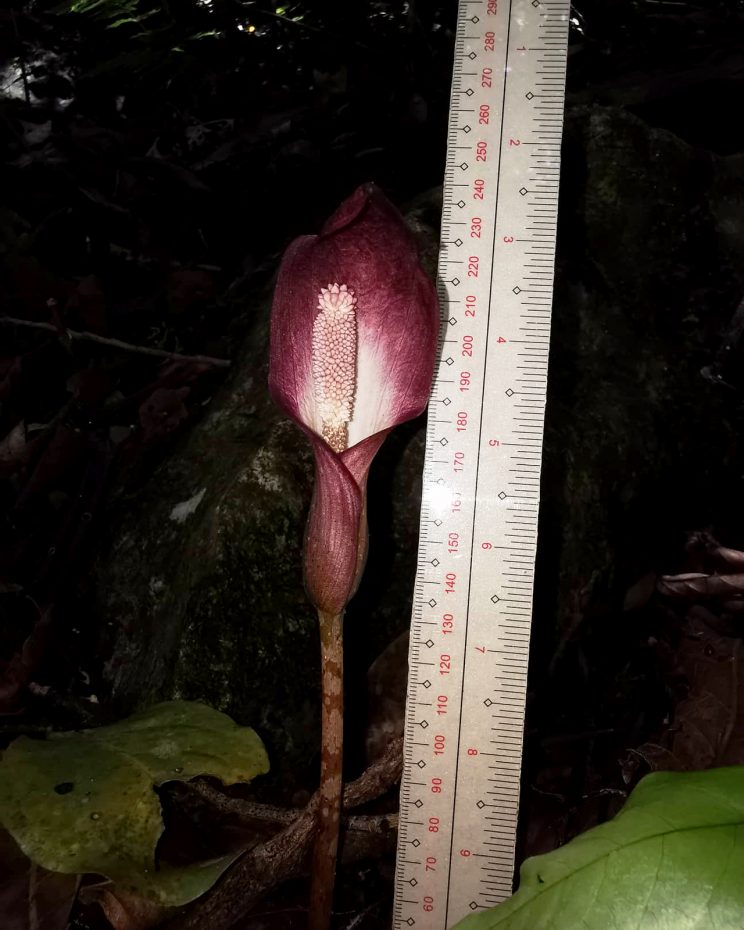 The Amorphophallus minimus gets its name from its diminutive size in relation to others of its species.

“The discovery of A. minimus is a clear manifestation that partnerships and collaborations with in-situ and ex-situ stakeholders are important in understanding our local biodiversity amidst this pandemic. I am truly grateful to the researchers of PTI, their collaborators, and generous donors for their dedication and unwavering support of DENR field personnel like me,” added Leonardo Udasco Jr.

“Their technical knowledge in identifying plants has helped us in the government to work hard and protect our forests, misshapen by human activities, such as but not limited to land conversion, timber poaching, and worse: regional upland migrants who are victims of their own wrongdoings in their previous ‘forefathers land. The discovery of A. minimus as Critically Endangered is an opportunity for us to calibrate existing laws concerning protected areas, management strategies, and conservation efforts.”

The full report entitled “Amorphophallus minimus (Araceae), a new species from the montane forest of Nueva Ecija, Luzon island, Philippines” can now be found in the Nordic Journal of Botany Volume 39, Issue 8.

I fell in love with agriculture because I like to eat