Jonjon Sarmiento, aka Farmer Jon, is a sustainable agriculture advocate, a community organizer, and a climate crisis activist. He is also the man behind Kuatro MariaS’ Agroecology Farm in Oriental Mindoro. The farm is named after his four daughters and the four elements, with the capital “S” at the end standing for “sustainability.”

Aside from fully sustaining the Sarmiento family’s needs, the farm is a DA-ATI and TESDA accredited learning center for sustainable agriculture. It also serves as a model for the integrated diversified organic farming system in the province.

It was also around this time that many things began to happen to help cement Sarmiento’s advocacies of sustainable agriculture and climate change. He began volunteering in the social action center of the Diocese of Calapan, which led to being exposed to and involved in farmers’ organizations MASIPAG (Magsasaka at Siyentipiko Para sa Pag-unlad ng Agrikultura ) and PAKISAMA (Pambansang Kilusan ng Samahang Magsasaka), where he saw and understood the benefits of integrated farming.

But the real reason behind Sarmiento’s foray into sustainable agriculture was because mining had entered the province around the same time Sarmiento was developing his farm. “They were saying that agriculture wouldn’t be able to meet the province’s [economic] needs so we had to prove that that wasn’t the case,” he says. “We couldn’t find an economically viable farm, so I developed a sustainable agriculture farm, and this is the outcome. It’s now a learning site.”

He also read David Suzuki’s book “It’s a Matter of Survival” about the climate crisis. “It’s one of the factors that pushed me to develop a farm for my family’s food security,” he says.

READ: This farmer bikes around his province to tell others about the climate crisis 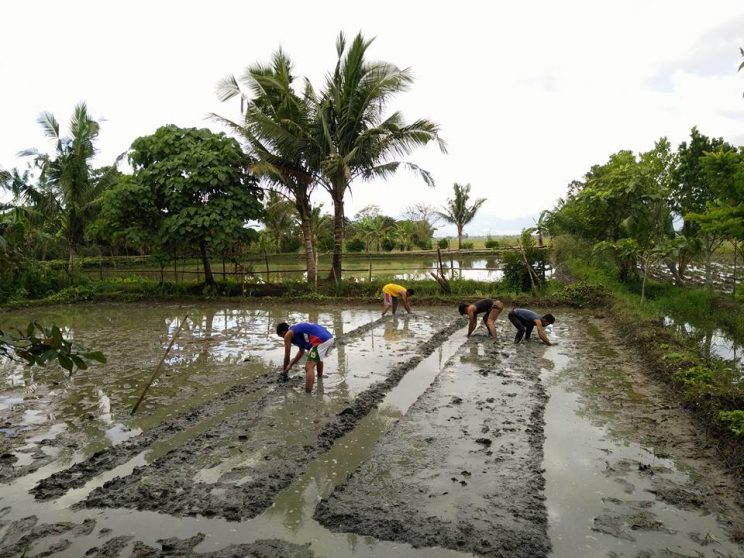 Students from Romblon State University (RSU) Calatrava Campus fulfilled their internship on Kuatro MariaS’ farm to learn about agroecology. This was done in partnership with DA-ATI4B.

The first thing Sarmiento did was develop a farm plan specifically tailored to surviving climate change. “I love bringing in different kinds of plants from various places,” he shares. “I developed a farm plan with food security and anti-mining in mind. We wanted to show the viability of agriculture. I wanted to prove that this farm could be resilient despite the climate crisis and ever-changing weather.”

Read more about farm planning: The Bank in Your Backyard: Practical Tips on Farm Planning

Kuatro MariaS’ isn’t just a place where crops grow. It’s also incredibly biodiverse, home to different types of wild flora and fauna. “I’ve converted the windbreakers into a food forest. I’ve also planted native trees along the riparian corridor of the stream,” Sarmiento shares, the latter referring to the vegetation that grows around natural bodies of water. “I currently have 113 native trees… that serve as food for the birds, so the whole farm is a small forest.”

Sarmiento emphasizes that in integrated farming, there isn’t a one-size fits all scheme, even on the same farm. To foster ecosystem diversity, for example, he had to create different kinds of ecosystems on his property. For example, a part of the farm is dedicated to an “open sunlight ecosystem” where his family gets their food. This includes a seed bank and a small rice field where they grow black and red rice for varietal diversity.

Some of the food crops available on Kuatro MariaS’ farm.

Bouncing back from calamity

The area’s biodiversity plays a huge factor in the farm’s resilience. This was proven when Typhoon Nona (international name Melor) swept through the province in December 2015, causing more than seven billion pesos in damage nationwide.

Quatro MariaS’ wasn’t spared. “The farm was in shambles,” Sarmiento says. “I thought it had been destroyed.” 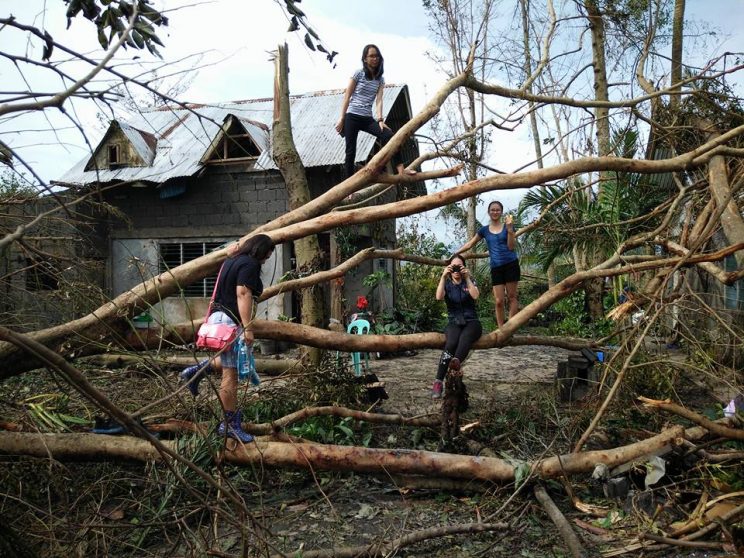 A photo of the farm after it was hit by Typhoon Nona.

Then he realized that it was his windbreakers that had sustained the most damage. “That’s their purpose. To break the wind. They’re like soldiers, frontliners. They protect the rest of the property.”

He happened to be housing an intern from the United Nations Food and Agriculture Organization (UN FAO) at that time and together, they observed how long it would take an integrated farm with a climate resiliency-themed farm plan to bounce back from a devastating natural disaster.

To their surprise, it only took 21 days to fully recover.

Sarmiento realized that the damage was largely superficial. For example, none of his chickens died, even though their coop was destroyed. The chickens (all free range) had sought shelter underneath small trees, like calamansi, which protected them from both the rain and from the bigger trees that were falling because of the strong winds. This was also when he discovered that the stress of the typhoon also resulted in more eggs being laid.

The fallen trees and strewn branches were either turned into firewood, made into furniture, or used in construction.

The typhoon gave Sarmiento the opportunity to experiment with and learn a lot of things about integrated farming in general and how to better apply it to his farm in particular. By studying the damage, he figured out which trees weren’t effective as windbreakers because they couldn’t handle strong winds. Mahogany trees, for example, didn’t stand a chance.

And since the typhoon already toppled the trees for him, all he needed to do was move them and plant more appropriate species, all of them native to the country. “The aftermath of each storm is a chance to redesign [the farm], he says. 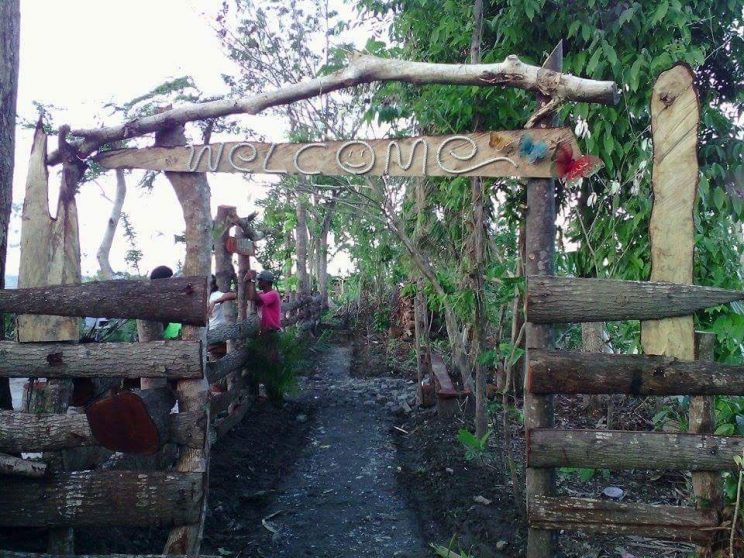 Because of its agroecological planning, Kuatro MariaS farm was able to bounce back less than 30 days after being destroyed by Typhoon Nona.

Sarmiento has established a set of protocols for each part of the farm, depending on the season.

He has an aquaponics system that mimics the flow of a stream, where he keeps a variety of fishes, including dalag (Neochanna burrowsius), carp, and gourami. Because its surroundings are landscaped to look like a lake, it also attracts a lot of birds, adding to the farm’s biodiversity.

He also keeps native pigs, whose manure is turned into biomass compost, which also removes the odor problem, and whose bedding consists of different dry decomposing materials that don’t attract flies.

The previously mentioned free-range chickens are kept in the farm by an “edible” fence composed of plants like madre de agua (Trichanthera gigantea) that surround the whole farm and can also be used to feed the other livestock.

The farm animals aren’t the only ones who benefit from edible landscaping. “Each corner is filled with food,” Sarmiento says. “Our ‘grass’ is actually saluyot and ampalaya. We have different sour fruits like kamias (Averrhoa bilimbi) , calamansi, and katmon (Dillenia philippinensis).”

Sarmiento’s experiences only serve to strengthen his belief that sustainable agriculture is the only way to move forward given the climate crisis. “Transforming the landscape through integrated diversified organic farming systems towards agroecology future. This is always the title of my presentation.”

He was able to further test his theory during the pandemic. When the county was placed under strict quarantine in March 2020, Sarmiento used it as an opportunity to test whether his farm really could sustain his family. No one would leave the farm, not even to buy food outside. Not only were they able to feed themselves, they were also able to help their neighbors by giving them some of their harvests and firewood. “Because the farm is small, it can’t feed a lot of people, but we didn’t need to [get food outside], either,” Sarmiento says. “We don’t go hungry on the farm. You can even eat the flowers here.”

He shares that the only things they need to buy most of the time are salt, soy sauce, and oil. 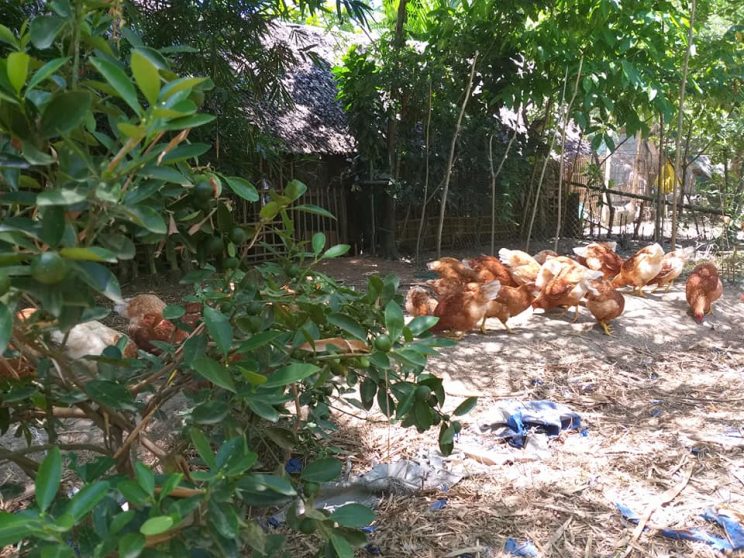 Some of the free-range chickens that roam inside Kuatro MariaS farm.

Sarmiento has established that the farm can be self-sufficient enough to feed his family during a pandemic lockdown. But can it also make money? The answer is yes.

He has different sources of income. One of them is a bamboo nursery. “Every branch, every rhizome of bamboo is money,” he says.

Other sources include seedlings, eggs, chiks, dressed chickens, pork, and value-added goods made from surplus harvests. Because the farm is also a learning site, Sarmiento earns additional income from farm visits and training sessions. Farm tourism is another source of income. “Some people stay over and all I ask is that they not bring in food because we can provide them with all organic meals,” he says.

He’s also set aside a hectare of land for the cultivation of red and black rice, and is looking into setting up a nursery for native trees, which are gaining popularity over imported and possibly invasive species.

“But you know,” Sarmiento says, “the first thing a farmer should resolve is their food security, because they can save a lot.”

He calculates that they were able to save P6000 a month for the first 10 years, and now they save about P12,000 a month because most of their food comes from the farm. “It’s all organic, you can eat anytime, and we always have enough to share with neighbors,” he adds. “In a way, what we save is what we’ve earned. You can use the money you saved on food for other things.”

Future plans include the construction of a farm restaurant, as well as bahay kubos for guests and areas for sports and team building activities. “One of the things I’m proud of is the number of plants and livestock inside 4,400 sqm that humans can make use of,” Sarmiento says.

He takes pride in the farm he’s built, and in his profession as a farmer. It’s why he’s called “Farmer Jon,” the farmer used as an honorific in the same way that “Dr.,” “Atty.,” and “Engr.” are used before the names of doctors, lawyers, and engineers respectively. “I always tell the young farmers I train that they should be proud because farmers hold a lot of power,” he says. “Our hands hold a lot of power to cultivate different things on the farm.”

Sarmiento explains that in integrated farming, a mature integrated farm is called an agroecology permaculture farm because natural disasters aside, the things on the farm have achieved permanence and cultural respect in its surroundings. This is where Kuatro MariaS’ is right now.

“I planned this in ‘98 because my wife and I were married in ‘95 and because I was a community organizer, I was always away for work, so I developed the farm to provide food for my family,” he shares. “I’m expecting my first grandchild this September 2021 and I’m excited because they will have many things to learn about and to eat… The first food to touch my grandchild’s lips will come from this farm.”

What causes leggy houseplants and how to fix them