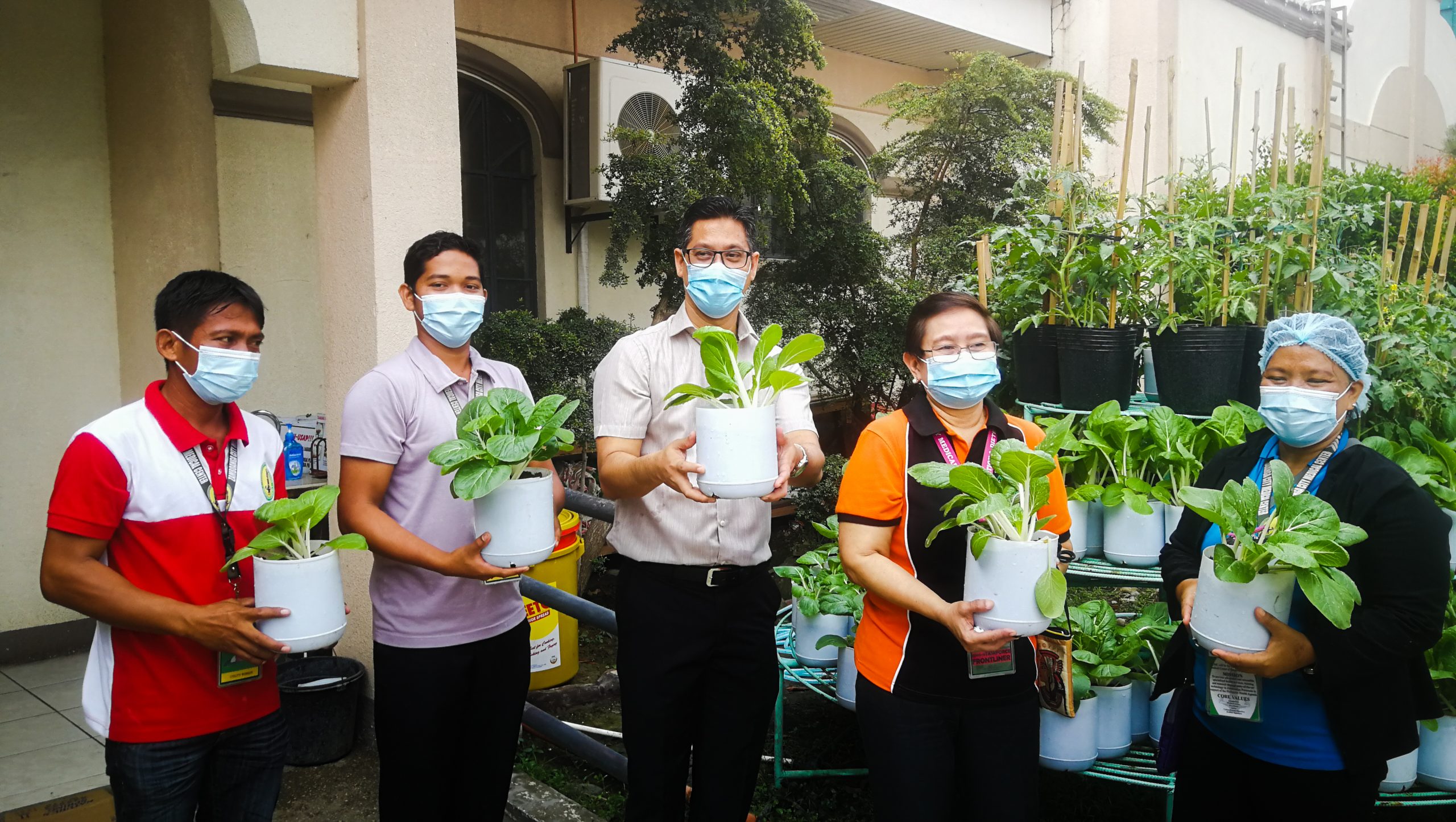 ZCMC staff posing with some of the plants from the hospital’s urban garden.

Measuring about 15-20 square meters each, the urban gardens have three locations: in front of the hospital kitchen, behind the Psychiatry building, and in front of the TB-DOTS clinic, the latter mainly dedicated to papaya trees.

The gardens were constructed from upcycled materials, including containers from the laundry section, sacks from the dietary section, old lumber, and donated plastic containers. 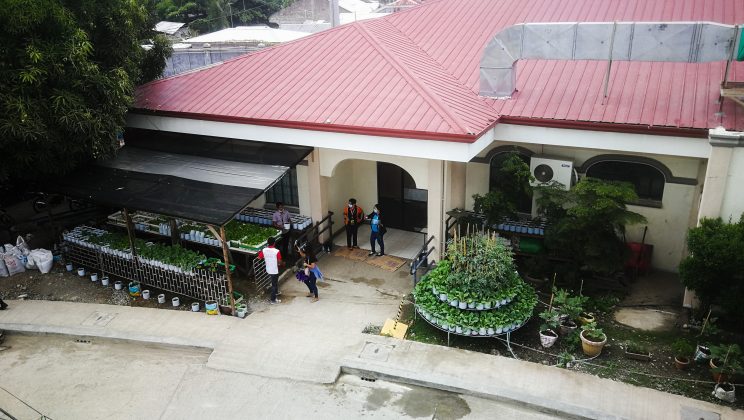 Aerial view of one of ZCMC’s urban gardens.

Though construction started in the last month of 2020, the idea for it was actually planted a year earlier.

“Around 2019, I was invited to an activity by the Rotaract Club of Zamboanga City West called Siembra Paz ( Planting Peace). In that activity, they went to a relocation site of internally displaced people of the 2013 Zamboanga Siege and taught them urban agriculture. I was very impressed with their success and asked to meet their consultant, Mr. Muneer Hinay. We tossed ideas around and I remarked that it would be a really nice idea to have an urban garden at the ZCMC,” says Dr. Afdal B. Kunting, MD, MPH, FPCP, ZCMC’s Medical Center Chief (MCC).

READ: A garden of hope: Community garden is a source of food, profit, and hope for community members displaced by the Zamboanga Siege

They couldn’t proceed with the idea right away as the hospital was under a different management who had different priorities. That changed when Dr. Kunting became MCC in November 2020. “Mr Hinay contacted me about our plans. We had meetings with our gardeners, dietary, and engineer sections. Initially, training was conducted on the methods of urban and container gardening (and) hydroponics, then construction of the raised beds for the containers was done,” Dr. Kunting relates. “(We) officially began in February 2021. We had our first harvest by March.”

Even though they cut costs by using upcycled materials, funding, not to mention manpower, remained a challenge. The hospital needed money to purchase materials such as “garden soil, fertilizer, seeds, coco peat and hydroponic solution.” 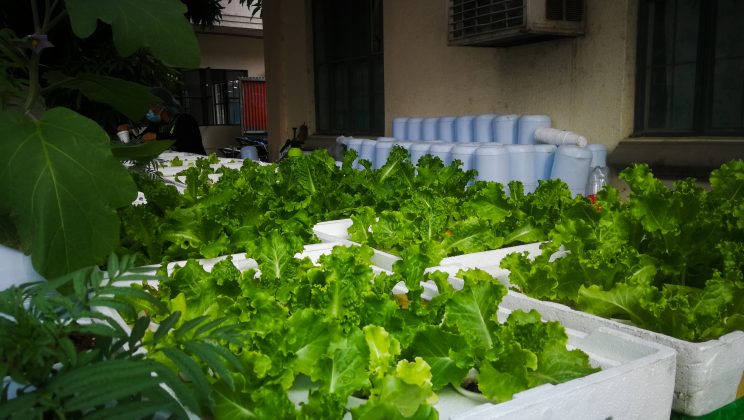 Some of ZCMC’s hydroponically grown crops.

Fortunately, they were able to overcome these challenges. “We did get some support from the Mr Hinay and his foundation Kids Who Farm,” Dr. Kunting says. “Later, the DA (Department of Agriculture) also gave us seeds and I was able to get donations of chicken manure from friends, the PCA (Philippine Coconut Authority) gave us cocopeat as well.”

The gardens are composed of container gardens, which grow herbs and vegetables like pechay, eggplant, okra, tomatoes, string beans, kangkong, basil, garlic chives, and lemongrass; a hydroponics are that grows lettuce, eggplant, and kangkong, and papaya trees planted inside tires for support. It is maintained by gardeners and personnel from the hospital’s Dietary Section. “The vegetables are used for the patients, with the excess distributed to the staff. The lettuce is sold to have rolling capital,” Dr. Kunting says.

Though small in size, the gardens have made a big impact on the hospital. “We can give super fresh veggies to patients and staff,” Dr. Kunting says. “Our menu has also had changes to incorporate the regular harvest of vegetables. We have decreased some expenses as well. We have also upcycled many items that would have been thrown out.” 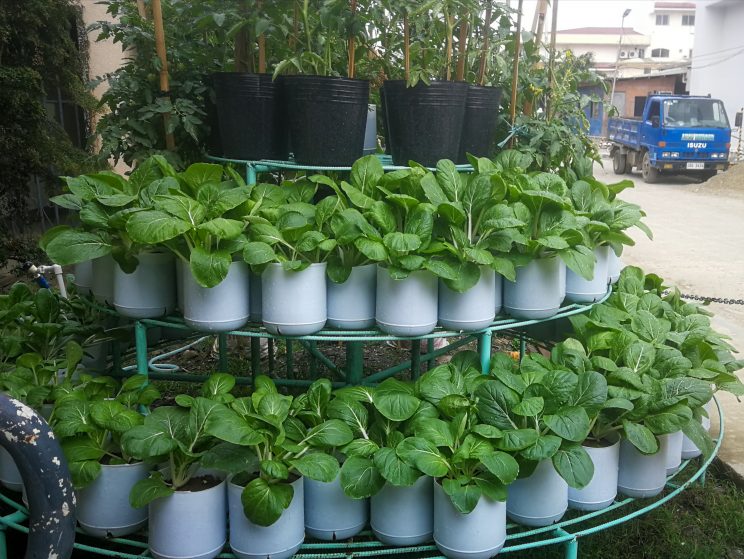 ZCMC’s urban gardens were constructed using upcycled materials that would otherwise have gone to waste.

It’s also altered the mindsets of the hospital staff in a positive way. “We used to think that preparing healthy, pesticide free food for patients would be difficult and expensive. This experience taught us that healthy food can be affordable and accessible,” Dr. Kunting shares, adding that two of the biggest benefits the urban gardens have brought to the hospital are, “healthy food (and) engaged staff.”

Buoyed by such encouraging results, the hospital plans to expand the garden to the roof deck of their new tower and the flower beds in the parking lot. “We also plan to grow fruits like grapes, strawberries, melons on top of the papayas we have growing now,” Dr. Kunting says. “We also plan to have teaching sessions on organic, container farming for staff and watchers of patients so that they too can start their own urban gardens.” 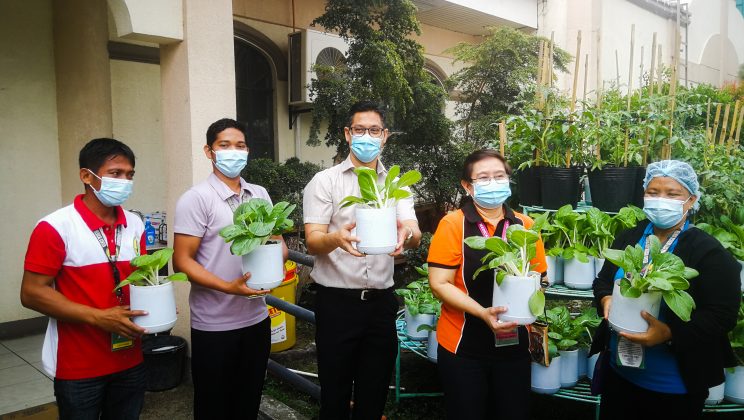 ZCMC staff posing with some of the plants from the hospital’s urban garden.

Needless to say, Dr. Kuntung and the rest of the hospital staff have been very pleased with the hospital’s latest addition. “There are many benefits to having an urban garden,” he says. “Give it a try.”

Photos courtesy of Kids Who Farm

There is hope for young people in coconut farming