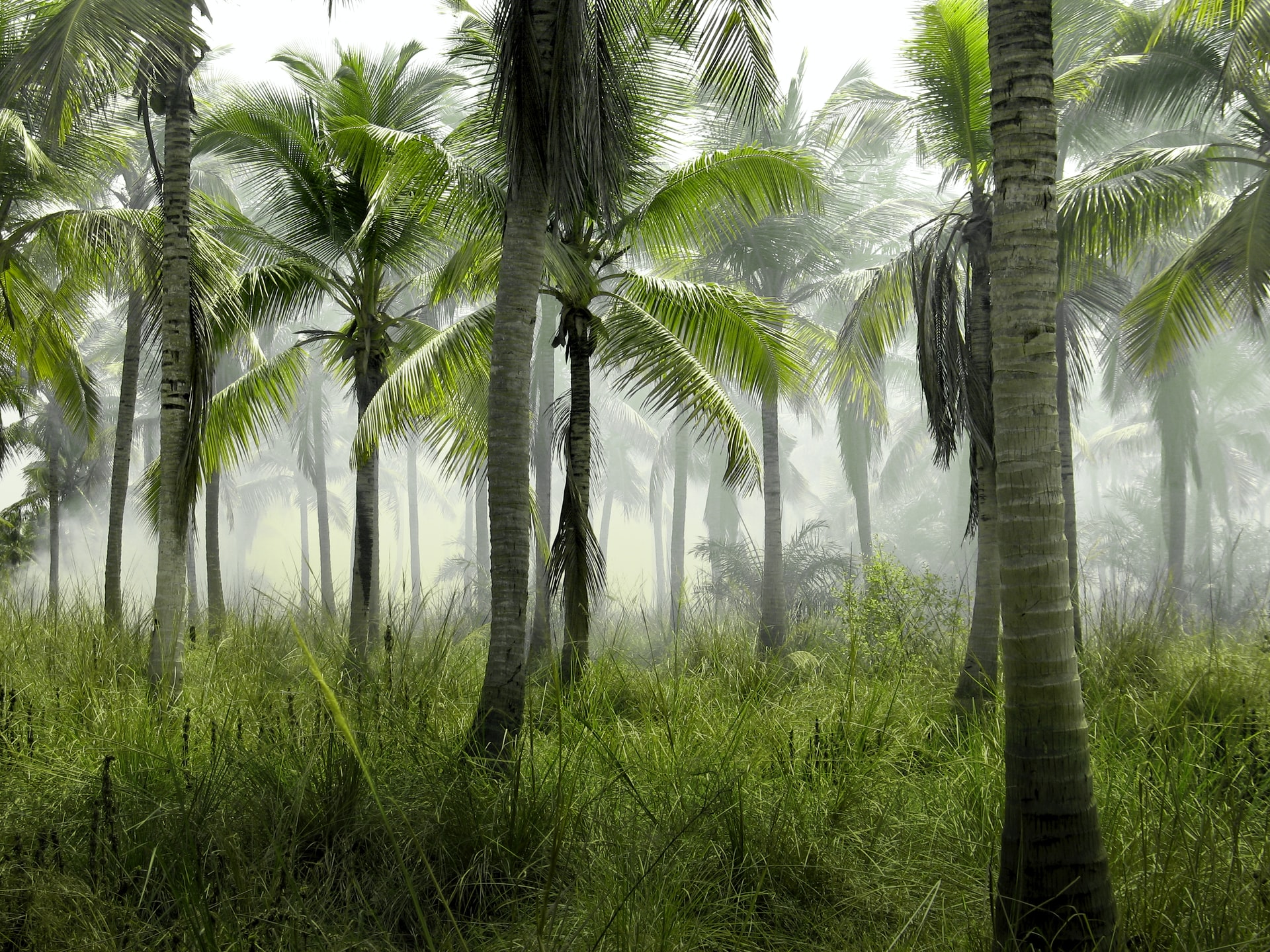 Photo by Hans Eiskonen on Unsplash

While the coconut sector has significant strengths as it provides regular albeit low incomes and sustains ecologically stable landscapes, it faces countless challenges and momentous problems such low productivity and aging palms. At the same time, the fluctuation and gradual decline of the prices of copra and other coconut products pose a considerable threat to the livelihood of coconut farmers.

Furthermore, climate change is already distressing life on earth in many ways and the resulting extreme weather events are likely to affect coconut production in several ways. In addition to the effects of storms and droughts, increasing temperatures have a tremendous impact on the productivity of coconut palms. In short, as climate change makes weather events more severe, it is a real threat to coconut farmers.

Concerned groups and individuals, including Pope Francis, speak of ‘Climate Crisis’ as they suppose that the term ‘climate change’ no longer accurately reflects the seriousness of the overall situation. The latest report of the Intergovernmental Panel on Climate Change (IPCC), released in August 2021, states: “It is unequivocal that human influence has warmed the atmosphere, ocean and land. Widespread and rapid changes in the atmosphere, ocean, cryosphere and biosphere have occurred.”

Furthermore, the IPCC predicts “that global surface temperature will continue to increase until at least the mid-century under all emissions scenarios considered. Global warming of 1.5°C and 2°C will be exceeded during the 21 st century unless deep reductions in carbon dioxide and other greenhouse gas emissions occur in the coming decades.” 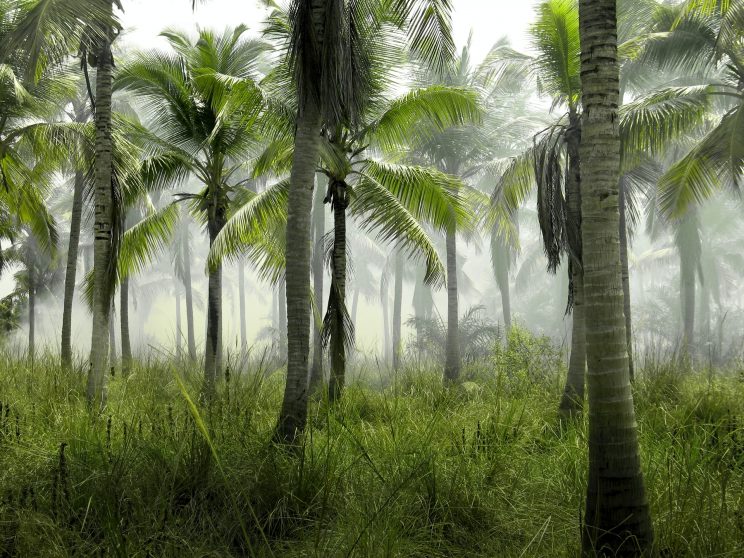 Photo by Hans Eiskonen on Unsplash

Carbon – the core of the problem

Many people are wondering and are asking: “What are the reasons for this crisis?” In the past hundreds of thousands of years of earth’s history, the share of carbon dioxide in the atmosphere has been much lower than today. Since humans started to intensify agriculture about 10,000 years ago, carbon dioxide has been released from the soil due to deforestation and inappropriate farming practices like the burning of farm residues. However, in the past 150 years, the burning of fossil fuels such coal, gasoline and diesel, contributes most to the fast-increasing amount of carbon dioxide in the atmosphere.

Carbon dioxide (in brief CO 2 ) is the gaseous form of carbon, the life-giving element that takes several functions in the natural world. Carbon compounds form the basis of all known life on earth and it is continuously exchanged between the atmosphere, plants along with other living beings, soils and oceans as well as rivers and lakes.

Even though its share in the atmosphere is very small, CO 2 plays a very important role as it facilitates the regulation of earth’s temperature. Carbon dioxide has the ability to block heat from the sun from leaving earth’s atmosphere. This effect could be compared to an invisible blanket.

If CO 2 is there in the right amount of about 300 parts CO 2 per million parts (ppm) and certainly below 350 ppm), it assures that we have the temperatures which allows nature and humans to thrive. If there is too little, it would be extremely cold and life on earth would be very limited. On the other hand, if there is too much of this gas, it gets increasingly warmer and eventually too hot for most life forms, including humans.

Unfortunately, this is what we are still ignoring. Year by year, the amount of carbon dioxide in the atmosphere is increasing and so the average temperature around the world. 60 years ago, the atmosphere contained about 320 ppm. In August 2021, there was about 414.5 ppm of CO 2. The excess CO 2 is responsible for 75 percent of the global warming and during recent years its share has been increasing annually at the rate of 2 to 3 ppm. This makes the environment warmer and more humid; consequently, extreme weather events like typhoon Yolanda become more likely.

Besides storms, heavy rainfalls and consequent floods are expected to become more frequent and more severe. Likewise, droughts are predicted to occur more often and to negatively affect coconut production. Although most coconut varieties can cope well with drought situations, yield drops. After the long drought in 2015 to 2016 caused by the El Niño phenomenon, it took in many places about one year until coconut production recovered.

The increasing global temperatures also cause the giant ice masses on land to gradually melt and the water flows to the sea. Consequently, the level of the oceans is continuously rising. In 2014, the global sea level was 67 millimeters above the 1993 average and continues to rise at a rate of 3.2 millimeters per year. Consequently, coconut palms in low-lying farms near the sea or near rivers will be affected in the future. Coconut palms withstand flooding for some days, however, if the water no longer subsides, their roots will suffer.

Changes in weather patterns are also likely to affect balances between pests and their predators. Consequently, damages from coconut pests and diseases transferred by insects may increase.

While in November this year, delegates and world leaders are going to review the Paris Agreement of 2014 and their respective pledges to curb runaway warming of planet earth during the forthcoming UN Climate Change Conference (COP26), coconut farmers may want to start immediately adopting farm practices which help to minimize the effects of droughts and other severe weather events.

Usually, farmers do not give much attention to the soil in their farms. Yet it holds the key for reducing several negative effects of climate change. Typically, soil in coconut farms is well protected against erosion, however, in most farms, the soil has lost a significant portion of its initial fertility over the years. That it does not need to be like this, can be observed in numerous well-managed coconut farms. Simple practices, such as covering (mulching) the roots of the palms with palm fronds and husks make a big difference.

Another step is to intensify intercropping. A dense plant cover allows soil to hold more water, and this assures the availability of water for the plants during dry spells at least for some time. The more plants are growing in a farm, the more roots and organic matter are found in the soil. This gives soil a sponge-like character and enables it to hold more water. It enhances the capacity of soil and plants to stand adverse conditions and to recover faster from them – the essence of ‘climate resilient’ farming practices. This also improves the supply of drinking water in the respective locality during periods of droughts.

Especially in upland coconut farms the application of agricultural salt will be beneficial to reduce the impact of droughts. A sufficient supply of chloride (which together with natrium forms the common salt) helps coconut palms to regulate water losses and keep up photosynthesis in stress situations for an extended time.

Another issue is that old coconut palms are more prone to damage by storms. Many coconut farms should be replanted as the palms have already surpassed their ‘economic lifespan’. A well planned underplanting carried out over a couple of years would help to assure satisfactory yields in future and lower the risk of damages due to storms. Intercropping with tree crops further minimizes potential damages.

Adaptation to the threats may result in additional work, however coconut farmers should not consider this work as a sacrifice or burden but as an opportunity to buffer their farms against future risks and serve the common good. Although many of the resulting changes only become noticeable and measurable after several months, if not a year, the additional efforts will help to improve the overall productivity of coconut farms in the years to come.

The content of this article relates information covered by the curriculum Climate Resilient Coconut Farm Management designed for a three-day farmers training is available at: https://snrd-asia.org/climate-resilient-coconut-farm-management/

Find all your gardening needs through this hardware store’s hotline