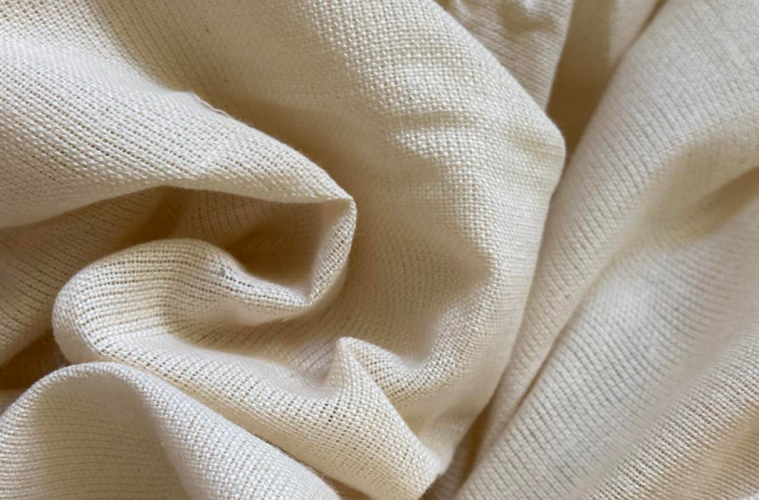 A close up of Iloilo Cotton Hablon, the textile made from RYPIC Iloilo yarn.

The textile industry can become a key player in the agriculture industry, and the Philippine Textile Research Institute (PTRI) is leading the way.

The PTRI is a research and development institute, one of seven, under the Department of Science and Technology. “Textiles has a very, very wide offering,” says DOST-PTRI Director Celia B. Elumba. “It goes from what we know as wearables and home furnishings, but it also goes into industrial, technical, and medical textiles.

“We do research and development, but we also conduct training, technology transfer, capacity capability building. We also do laboratory testing, both chemical and physical, and we are the only textile testing facility in the country and very soon, we will have a medical textile testing center….”

Part of PTRI’s mandate is to create textile technologies and license it out to adopters. They’ve recently created a technology that can convert the fibrous materials of an agricultural or forest product into “a spinnable material which can then be transformed into a spun yarn, or beyond a spun yarn, can be used as an input material for non-wovens.”

Elumba elaborates: “It means that it is then something that you can use to knit, to weave, even to crochet, as well as to make non-woven or alternative leather-like materials or upholstery materials or even sidings for the automotive industry, aviation industry, for your face mask, that is what a non-woven material is. It has a lot of applications including filtration of air, water, and oil.”

One of this technology’s aims is to replace cotton with a more environmentally sound alternative. “They say that for every gram (of cotton) that you replace, you save one gram of water. So if I replace it with 30% pineapple leaf, I save 30% in water utilization. So that, in a sense, for us, is our climate positive action in terms of textile development,” Elumba says.

The technology is currently being utilized, among others, by groups of weavers in Iloilo. It is yarn manufactured by the Regional Yarn Production and Innovation Center (RYPIC) in Miag-ao, Iloilo. It doesn’t have a market name yet, so it’s called RYPIC Iloilo yarn—a nod to how area and community specific the use of this technology can get. 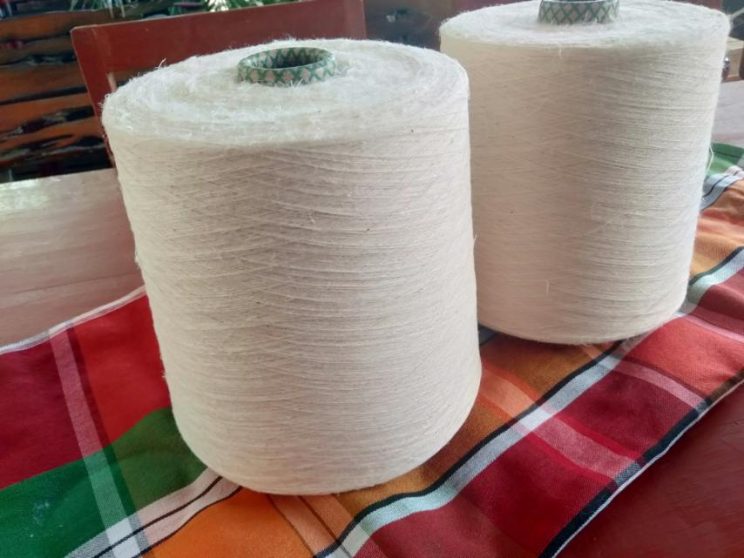 RYPIC Iloilo yarn made from 30% abaca or pineapple leaves and 70% Philippine cotton, all locally grown.

The “TELA” in PTRI’s TELA Pilipinas stands for “Textiles Empowering Lives Anew.” “It’s a throwback to the time when England didn’t have an industry… and textiles became the lynchpin for industrialization, for growth,” Elumba says. “What we want is to really have a version of this that begins from the basics, meaning ‘what you have where you are.’”

This approach takes textile manufacturing to a local level. “It’s a bit beyond the finished product itself but it’s more of the whole notion that you can do value transformation on the local level is what I think is the fantastic part of what the technology enables,” she adds.

To do this, a bit of reverse engineering was involved. First, PTRI identified areas with strong weaving traditions (aka traditional textile manufacturers). Next, they identified the materials used by these weavers, both in modern times and before the advent of synthetic materials like polyester. This led them to wondering about what crops were grown to be used to make textile, and if it has disappeared, how can it be revived. “If they don’t start it today, 10 years later, we will all be scratching our heads and asking the same question, what can we do about textiles in the Philippines?” Elumba says. “This is why it’s called ‘Soil to Skin.’ Because we really have to enable an ecosystem to take place, but without really taking a look at the supply chain and its conversion into value for the community, then you cannot speak of having a real textile industry.” 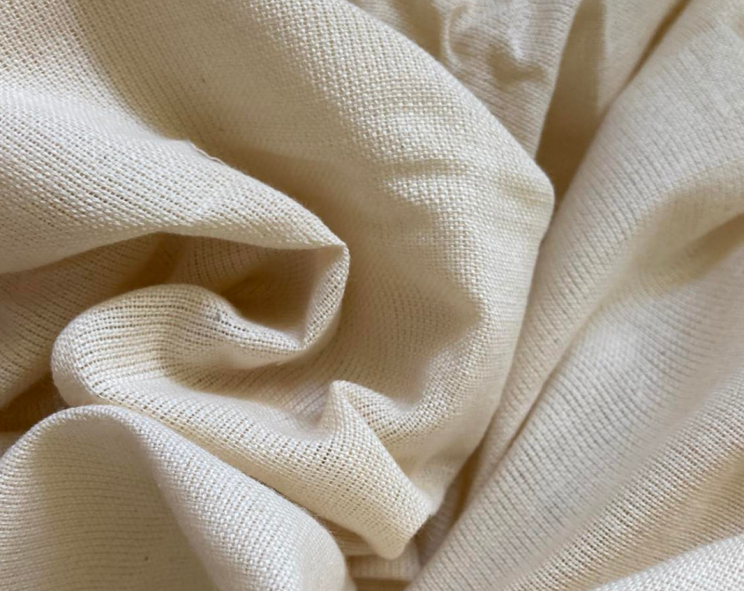 A close up of Iloilo Cotton Hablon, the textile made from RYPIC Iloilo yarn.

The RYPIC Iloilo hub was inaugurated in late 2019, four months before the Covid-19 pandemic started. But even before the pandemic shut down global operations, the center had already begun changing lives.

First of all, it meant greater competitiveness globally. While international buyers were attracted to local designs, the use of synthetic material, usually polyester, was often a turnoff. Having a source of locally made sustainable fabric would add a selling point for international clientele. But more importantly, it meant that some people who’ve had to leave Iloilo for work now had the option to stay home.

Elumba cited three examples, a male former OFW, a female former Quezon City factory worker, and a female former domestic helper in Manila who opted to stay in their hometown to weave. “When Covid hit, they were all with their families in Miag-ao in Iloilo. That, for me, was already a humongous value. So when we speak of value versus cost, this is a real value proposition,” she concludes. 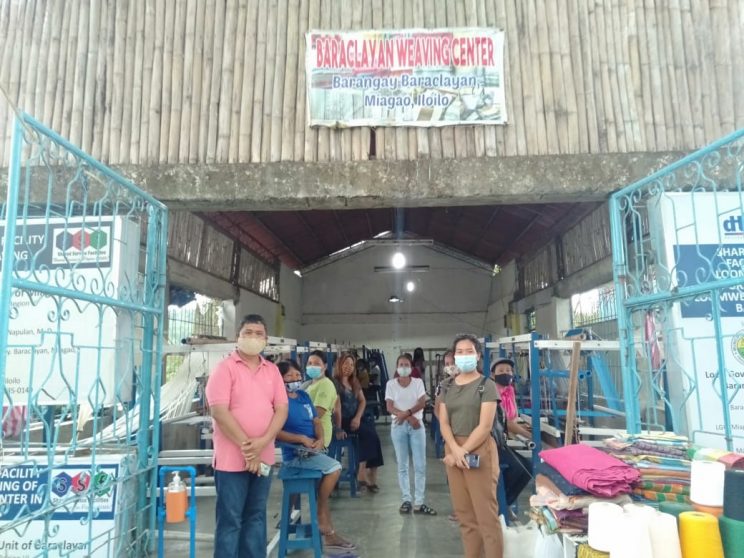 Baraclayan Weaving Center in Miag-ao, Iloilo, one of the weaving enterprises that Panublix has partnered with to use RYPIC Iloilo yarn.

From Soil to Skin

It isn’t just about manufacturing the textile. PTRI’s model starts from the farm and ends with the buyer and includes academic institutions, local municipalities, the regional office of the DOST, and a marketing and distribution arm from the private sector. For RYPIC Iloilo yarn, that private partner is Panublix, an Iloilo-based company for local distribution, and Heneral Merchendise for international endeavors.

Panublix comes from the Hiligaynon word ‘panubli,’ which means ‘heritage. They are an e-commerce platform that connects anyone who wants to source tropical textiles and also collaborate with weavers. “Essentially, we are a platform that is trying to take the yarns to market,” says Panublix co-founder Noreen Bautista.

They take the textile from the RYPIC facility to the 15 communities that they work with spread across Iloilo, Aklan, and the School of Living Traditions in Abra, who also supplies them with natural dyes, and turn it into a textile called Iloilo Cotton Hablon. “Most of our weavers use polyester for weaving [and]… aside from the fact that it’s not sustainable, it’s also not sellable in the international market,” Bautista says. “So slowly, we are also trying to do our best to get them to use the tropical yarns.”

RYPIC Iloilo yarn is made from 30% abaca or pineapple leaves and 70% Philippine cotton, all locally grown. The pineapple leaves would have normally been considered agricultural waste. The raw materials are supplied by the Baraclayan Farmers’ Group and Iloilo Science and Technology University’s (ISATU) partner farming communities. 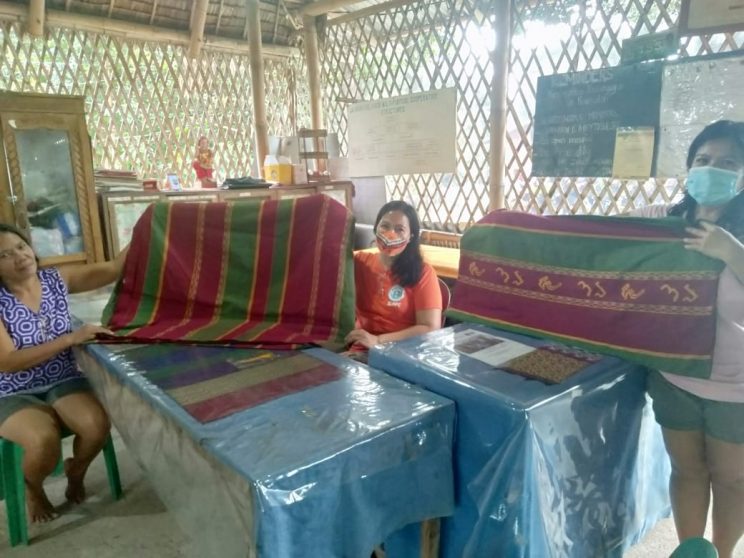 Salngan Livelihood Multipurpose Cooperative posing with woven University of the Philippines (UP) sablay (the sash used for graduation rites. Most of the UP sablay is actually woven in Iloilo.

So far, there’s been a huge interest in tropical yarn, especially from the local knitting and crocheting communities.What needs to be done is to assure potential clients of the yar’s quality and supply. “The demand is there but we also want to assure quality so we’re really trying to make sure that the supply chain can also support the demand,” Bautista says.

Along with fulfilling local demand via Panublix, RYPIC Iloilo also works with Heneral Merchandise, which helps connect it to foreign markets. “Creating markets abroad, we help agencies like PTRI and the private sector like [Panublix] develop the products to be more acceptable and sellable abroad,” says Heneral Merchandise’s founder Raffy Tesoro. “We provide the links between the different agencies between the private sector and the individuals.”

Ultimately, it isn’t just about selling a product. Boosting the Philippine textile industry has the potential to positively affect many sectors, including culture, fashion, and agriculture. “The goal for this on my end is I’ve always believed that the Philippines can become a cultural powerhouse, especially in today’s world stage of soft power,” Tesoro says. “The reason why I think other countries are more successful, other than the fact that they changed their cultural mindset, was they started from the beginning, which is agriculture… If you want to create soft power, the first two things you need to work on are food and fashion…

“What we’re trying to address now is creating as many efficiency links between the different industries and sectors as possible, concentrating for now on food and fashion, specifically fashion and getting it out there. Actually, marketing it is actually not as difficult as everybody thinks it is but… if we don’t have a consistently good product, there’s no way we can… get ourselves on the map. That’s our goal. And the best part of this is if it works, a rising tide floats all boats. It’ll raise incomes across all sectors. That’s what we’re going for: efficiency and imagination. Seed to shirt is my goal.”

Bautista agrees, “Masalimuot ang textiles (textiles are complicated), but that’s why for me, it’s exciting because there’s so much that you can uncover and innovate in to highlight the agriculture sector and the textile industry. According to my economics professors, the Philippines has been playing catch up for several decades but if we really focus on innovation with agriculture and textiles, we can hopefully catch up as we should.”

But perhaps most important of all, investing in the local textile industry has the potential to offer Filipinos the choice of not having to leave their towns and provinces to find work. “Can you imagine how much more robust the Philippine economy could be, how fewer perhaps would have to leave their provinces to work in the cities to go abroad because they already have something they can use as a means of a living in the very places where they live? That’s our hope,” Elumba says. “We have this saying, this is for Iloilo in particular—If you weave, you don’t have to leave.”