Arnel Biado is a retired district manager who used to work for a pharmaceutical company. Now, he spends his days growing food in his rooftop garden.

After many years of working in a fast-paced or demanding industry, many retired employees opt to live a simple, laidback life. They often find this lifestyle through farming. While some choose to settle in the province to start farms, others prefer to stay in the comforts of their city home and utilize the available space to grow food.

The latter is what Arnel Biado, a 66-year-old retiree, chose to do. It has been six years since he retired, but before that, he worked as a district manager for United Laboratories, popularly known as Unilab. Now, Biado spends his time tending to the fruits and vegetables on his rooftop garden in Trinidad, Benguet.

Before he started his rooftop garden, Biado dabbled in ornamentals. He later switched to growing food crops for “gustatory satisfaction.” He added that the pandemic also inspired him to start thinking about food sustainability.

Biado began by growing ornamentals. This is a picture of his Jade vine in bloom.

Biado cares for his crops using the basic knowledge he gained during his elementary and high school days. Yet he didn’t limit himself to what he learned from the past. The retired district manager also made use of modern technology by going on YouTube and social media to further his knowledge on his chosen hobby.

It was there that Biado learned techniques in growing food in limited spaces.

When life gave him lemons, he grew them 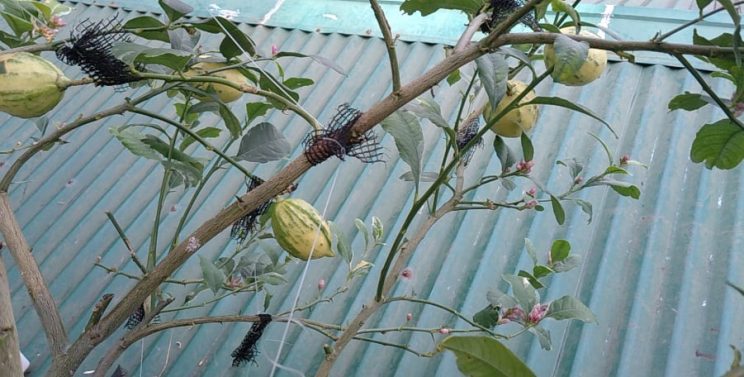 Variegated lemons, one of the lemon varieties that Biado grows in his rooftop garden.

Biado shared that he propagates the lemons through marcotting or air layering, an asexual method of plant propagation where roots are induced to form on the part of the plant while it remains above ground.

The retired district manager propagates his lemons by marcotting or air layering.

Growing lemons on a rooftop isn’t particularly hard. Gardeners just need to remember to place lemon plants in an area that receives full sunlight since lemons do well under these conditions. Lemons also need to be planted in well-draining soil and watered regularly.

The retired district manager also grows other fruits such as Davao pomelo, calamansi, figs, and cherry tomatoes. He even grows vegetables like native gingers, garlic, chilies, and more.

While gardening provides many opportunities, it also comes with several challenges. So even though Biado overcame the first obstacle of growing food in a limited space, he had to face the pests that frequent his crops, namely, ants, aphids, and caterpillars.

A mixture of chili peppers, garlic, and dishwashing soap is used as a natural pest control.

Since the crops he grows are for personal consumption, Biado avoids using chemical pesticides for pest control. Instead, he created a natural concoction made from chili peppers, garlic, and dishwashing soap.

It has been six years since Biado retired as a district manager for a pharmaceutical company in the Philippines. During that time, he started growing plants on his rooftop. And because of the pandemic, he shifted his attention to growing food crops to achieve his goal of living a sustainable lifestyle through farming.

Former OFW returned home to pursue his love for farming

Why watering can do more harm than good for wilting leaves