Coconut groves and farms, especially when interplanted with other trees, may give us a feeling of tranquility, but amidst the seeming peacefulness, coconut palms may be suffering. Like other plants, coconut palms usually do not have the optimal quantities or intensities of all essential abiotic factors available. ‘Abiotic factors’ refer to non- living components of the environment such as soil mineral particles, light, heat, or moisture. Here we talk about ‘abiotic stress’, or stress caused by non-living factors.

Unfortunately, in view of increasing temperatures and more frequent severe weather events due to climate change and the consequent global warming, incidences of stress for most living beings, including coconut palms, are likely to intensify. But how does this affect the palms?

One likely event is heat stress due to high temperature. When the canopy of a coconut palm is exposed to an air temperature of above 33°C, it starts minimizing further transpiration and closes the stomata in the leaflets. Although the palm reduces water losses, unfortunately leaves can no longer breathe in carbon dioxide (CO 2 ). As a result, photosynthesis in the leaves decreases and eventually stops.

Researchers of the Sri Lankan Coconut Board observed significant changes during a period of sixty years. In the town of Puttalam, the number of days exceeding the critical temperature of 33°C averaged at 25 days in 1950. In 2010, the average number of days had increased to over 100 days. In another district (Anuradhapura), the hot days increased from an average of about 100 days in the early 1950s to 200 days in 2010. Although the number of days in which the critical temperature is exceeded differs significantly from year to year, the trend is alarming. We observe similar changes in many coconut areas in the Philippines.

To better understand the effect of climate change on coconut palms, we should keep in mind two basic processes in plants: photosynthesis and transpiration.

Photosynthesis is the process used by plants to convert light energy into chemical energy such as sugars. These carbohydrates are synthesized from carbon-dioxide (which plants breathe in from the air) and water. Plants use this energy for growth and producing seeds or fruits.

Transpiration is the process of water movement through a plant and its evaporation from aerial parts, such as leaves, stems and flowers. Water is necessary for plants, but only a small amount of water taken up by the roots is used for growth and other life maintaining processes. The remaining 97–99.5 percent is lost by transpiration when the water near the surface of the leaves changes into vapor which helps to cool the palm.

Leaf surfaces are dotted with pores called stomata. In most plants, including coconut palms, they are more numerous on the undersides of the foliage. Depending on the situation, plants can open and close the pores.

Researchers in Sri Lanka established that coconut palms need between 30 to 120 liters of water per day, depending on the need of the palm and the soil water level.

If water in the soil decreases, palms close their stomata to reduce transpiration. Like in the case of heat stress, photosynthesis in the leaves will immediately decrease and less energy is available for growth and nuts. The palms now use most of the available energy to cope with water stress. This includes the deposition of more wax on the leaf surface.

Palms suffering from water stress first show drooping of the leaves due to loss of pressure inside the cells. The leaflets may be slightly folded. Later, the oldest leaves turn yellow, hang down, and finally die prematurely. Nuts ripening during a period of water stress remain smaller than normal and have a thinner layer of meat. Female flowers and buttons are shed, and sometimes even unopened inflorescences are aborted. In a later stage, nuts in various stages of immaturity drop as well. Older bunches may be torn and hang down along the stem with the older leaves. Nuts on such bunches are dropped after the first rain. 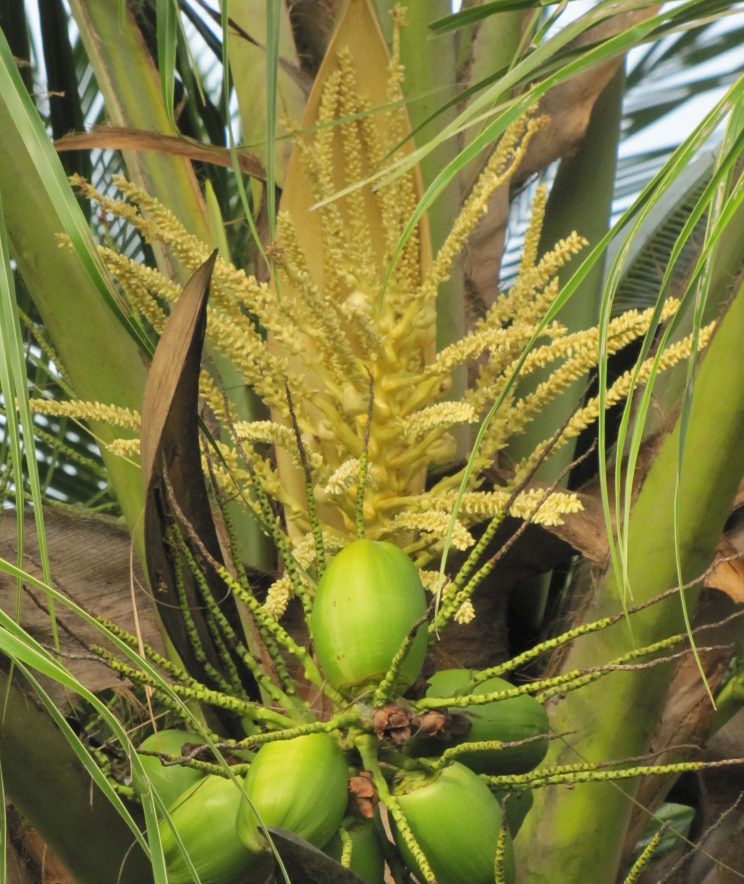 Water stress due to drought is expected to become the most limiting factor for the productivity of coconut farms. When palms need more water to stay cool, soil moisture is likely to decline. If soil moisture is low, palms can no longer obtain enough water. Independent from temperature and humidity, palms then close stomata to reduce transpiration. Unavoidably, photosynthesis in the leaves will decrease and so will the productivity of the palms.

What matters most is the availability of soil water. Water supply does not rely on rainfall alone but also depends on the capacity of the soil to retain water. This characteristic of the soil can be improved through the appropriate management of crop residues and of the vegetation in the plantation.

Another beneficial practice is the application of one to two kilograms of agricultural grade salt per palm and year improves the drought tolerance. The chloride of the salt helps palms to better control their stomata and therefore improve their performance during droughts. 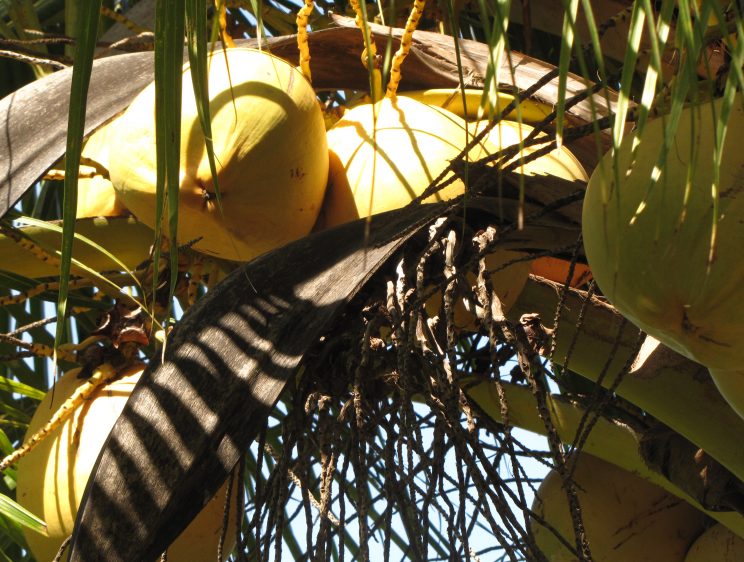 Most coconut farmers may not give much attention to the question of how the flowers of their palms are getting pollinated and who is involved in this work. Since most coconut palms are quite tall, we have difficulties appreciating the make-up of the cluster of male and female flowers that emerge from the spathe and to observe the pollinators who are visiting the flowers. As the development of the flower and the flowering of coconut palms are very vulnerable, it may be helpful to pay attention to this. There are several stages of the so-called reproductive process, which unfortunately can be negatively affected by severe weather events. Understanding the processes can help minimize negative effects and increase the number of nuts set.

Before the spathe opens and inflorescence emerges, about 32 months have passed since differentiations of its first cells in the growing point, or “cabbage.” From the initiation until the opening of inflorescence, the palm can be exposed to numerous unfavorable events such as drought or storm. It is known that nutrient deficiencies as well as an unstable supply of carbohydrate can delay flowering. Conversely, treatments to improve yield will only be fully realized after 44 months or almost four years.

In view of climate change, the viability of pollen is a concern. The quality of the pollen can be affected by heat and insufficient supply of carbohydrates. The time frame for the fertilization (pollination) of a female flower is only one to three days.

The best time is in the morning as heat, drought, heavy rainfall and strong wind reduce chances of successful pollination. Consequently, a sufficient number of pollinators must be active in the farm environment. The latter may not always be the case. In places where bees were brought in, the number of fruits set increased significantly. Therefore, farmers should be aware that taking care of pollinators is important. They may help native stingless bees such as ‘kiwot’ (Meliponini) by creating artificial shelters by for example using bamboo and by planting flowering plants in and around the farm to provide valuable forage for them. 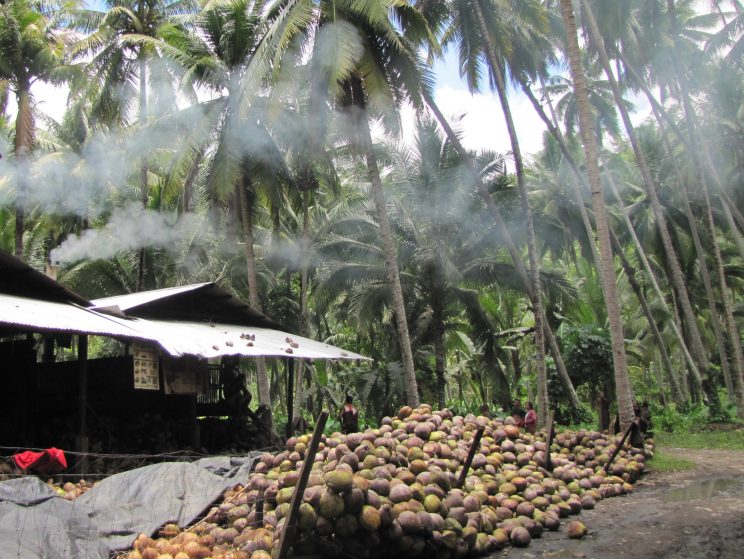 Higher temperatures and droughts are likely to become a regular feature around the world. Although over the centuries, coconut palms have shown a considerable degree of drought tolerance, increasing temperatures and more severe incidences of drought will negatively affect coconut production.

Careful management of the undergrowth (mostly native vegetation) in the farm and mixed cropping systems are ways to improve the micro-climate in the farm. By microclimate, we mean any climatic condition in a relatively small area, near soil surface, below the ground and within canopies of vegetation. It is ‘the climate near the ground.’ The more plants cover the ground, the more favorable the microclimate is. This means significantly lower temperatures and the preservation of soil moisture. This helps to achieve a higher rate of fruit setting compared to mono-cropped coconut farms.

Likewise, it is important to improve the capacity of the soil to readily supply water and nutrients to the palms. To realize this, all available organic matter should be used to cover the soil, especially around the palms. At the same time, burning of crop residues and the use of herbicides should be avoided. Plowing should be an exception as this removes the protection of the soil against heat and exposes it to water erosion.

Cover crops have been promoted time and again, but the recommendation to plant calopogonium, tropical kudzu, and centrosema or velvet bean has never been more important than now. Another option is integration of nitrogen fixing shrubs which will be regularly pruned to provide organic matter to cover the soil. This will keep the soil moist and increase the fertility and consequently the water holding capacity of the soil, an important feature of ‘climate resilient coconut farming’.

The content of this article relates information covered by the curriculum Climate Resilient Coconut Farm Management designed for a three-day farmers training is available at: https://snrd-asia.org/climate-resilient-coconut-farm-management/

Thanks to technology, this indoor garden won’t allow your plants to die

Who are the Filipino seed savers?