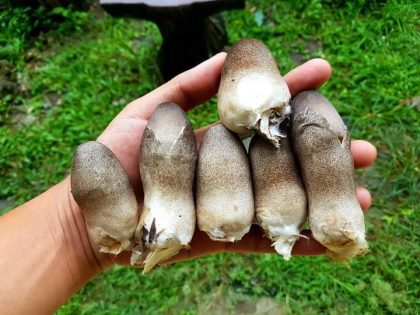 Many Filipinos have been engaging in mushroom farming since the 19th century. The number of mushroom farmers has recently increased as more people have realized its income-generating potential. In the Philippines, there are ten varieties of edible mushrooms, namely: paddy straw, oyster, shiitake, button, ear fungi, milky, yellowish oyster, reishi, lion’s mane, and king tuber oyster.

Farmers only need to be patient and persevering in growing them. Plus, mushroom farming can be a good source of additional income while disposing of farm waste materials.

The first step in straw mushroom production is area selection. Farmers need to look for a spot that receives direct sunlight during the rainy season and remains partly shaded during the dry season.

Mariano explains that this keeps mushrooms from being too moist or too dry. These problems can stop mycelia, or the mass of fine branching tubes that forms the main growing structure of fungi, from developing or result in a bad mushroom harvest.

Next, farmers should focus on collecting and preparing the substrate they will use to grow the mushrooms. They can either use dried saba banana leaves or newly threshed and dried rice straw. Properly prepared substrates result in better mushroom yields.

After the substrates are collected, farmers need to soak them in clean water for some time. Dried saba banana leaves need 12 hours or overnight while dried rice straw only need to be soaked for two to three hours. Avoid soaking them longer than the suggested time.

Mariano said that farmers mostly use banana leaves because these only need to be soaked. Meanwhile, the dried rice straws need to be sterilized using two methods of pasteurization, boiling or steaming.

Once the substrates have been soaked, farmers can start planting the mushroom spawn. But before that, excess water from soaking needs to be removed by allowing them to drip from the substrates. Once accomplished, farmers need to remember that mushroom spawn should be planted two to three inches from the edge of the pile and four inches apart from other spawns.

During the growing period, farmers need to maintain their mushroom spawns by keeping ants and termites away. They can do so by covering the growing area with plastic. Mariano advises that the cover should not be removed or opened during the incubation period. He added that after planting, the mushrooms don’t need to be watered for five days during the dry season, and seven days or longer, depending on the weather conditions, during the rainy season.

According to Mariano, unlike oyster mushrooms, paddy straw mushrooms prefer warmer conditions and being incubated for them to grow.

By the 10th to 15th day, the mushroom spawn will begin sprouting. Farmers can harvest straw mushrooms by first opening the cover slowly to avoid exposing the mushroom pinheads to abrupt conditions before gently holding the stem and pulling the mushrooms from the bed.

There are many ways that farmers can earn from mushrooms. They can either sell them as is or practice value-adding to create new products that highlight the taste or health benefits of the mushrooms. Due to the demand for healthy snacking alternatives, there has been a growing market for mushroom-based products. Some of the popular products include mushroom chicharon, seasoning, and candies.

Growing mushrooms has come a long way in the Philippines. The practice has become more than just a hobby for farmers and enthusiasts. Through mushroom production, farmers can earn extra income, preserve the environment, and even promote a healthy lifestyle.

Why are some strawberries white?