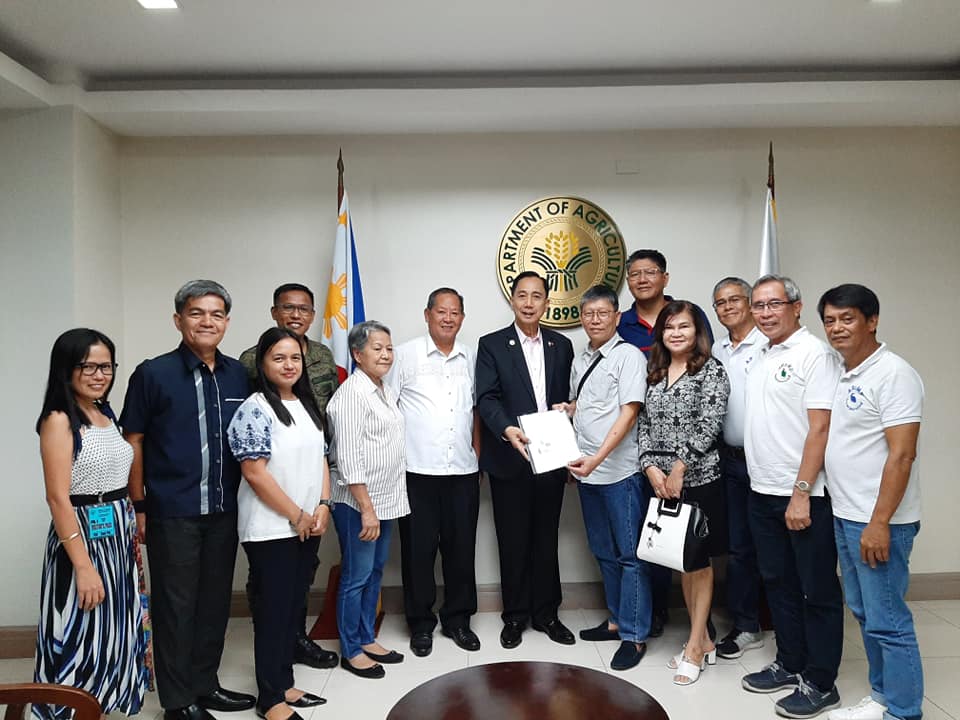 Our first article appeared in the Agriculture Magazine in 2015, after Mr. Zac Sarian (former MB Agriculture magazine editor) convinced us that we could do it. The article was published in a 6- part series (August 2015 to January 2016) on rabbit farming aimed to be instructional to those who may want to venture into small-scale rabbit production.

Promoting rabbit meat production was then such a tall order and changing mindsets was very much a challenge. Convinced that we are pursuing a path towards good nutrition and food sufficiency, we persisted in advocating and promoting rabbit meat production. My husband Art conducted free seminars at the AANI (Agri-Aqua Network International, Inc. Farmers and Gardeners Group) at the Quezon City Memorial Circle monthly, where we first met Sir Zac.

These seminars at AANI also gave us a venue where we can invite people to visit Aven Nature’s Farm, our integrated farm in Baliuag, Bulacan where whole day seminars on rabbit production are being conducted by Art monthly. Highlight of these seminars are farm tours and eat-all-you-can buffet lunches where rabbit dishes and other homegrown delicacies are served.

At the initiative of the seminar attendees at Aven Nature’s Farm, the Association of Rabbit Meat Producers Inc. (ARaMP) was organized in 2015. These pioneer rabbit raisers insisted on naming the group “rabbit meat producers” to set it apart from other rabbit groups who raise rabbits for pets. The group embraced the purpose of raising rabbits as source of protein to address the growing malnutrition in the Philippines and provide a source of additional income to households in both urban and rural communities.

The association has persisted in its advocacy and consistently engaged in campaigns to make the people know that indeed rabbits are included in the livestock category and has always been raised for its healthy meat since ancient times. Rabbit Meat, Healthy to Eat was the theme of the 1st Rabbit Festival held at the Quezon City Memorial Circle in 2016, while Healthy and Happy with Rabbit Meat was the 2nd Rabbit Festival’s Theme held in the same venue in 2017. 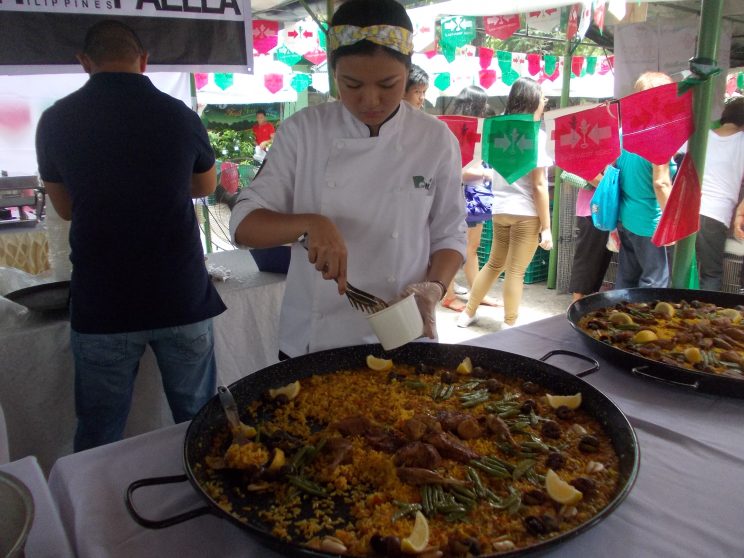 Phiesta Paella cooked by Chef Shi Yabes was made available to guests and participants of the 1st Rabbit Festival with the theme Rabbit Meat, Healthy to Eat. (Angie M. Veneracion)

A Stakeholder’s Forum, with the theme Kuneho Para sa Kalusugan at Kaunlaran, was also held in 2017, hoping to consolidate the industry gains and get input from the current rabbit raisers and stakeholders. This event was supported by the Bureau of Animal Industry- Animal Product Development Center (APDC), then headed by Ms. Emelina Lopez. It was participated in by different agencies of the Department of Agriculture, the academe represented by the Bulacan Agricultural State College (BASC) and the Provincial Veterinary Office of Bulacan.

ARaMP knew from the history of rabbit production in the Philippines that an industry will not grow if it is not supported by the government. The many attempts to grow the industry, since it was introduced by Missionaries and Peace Corps Volunteers after the 2nd World War, did not progress and failed because it did not get support from the government.

ARaMP continued to knock on the doors of government, paying courtesy calls to concerned agencies, and submitting industry assessments and proposals with every change in the Department of Agriculture and Bureau of Animal Industry heads. Persistence answered, the ARaMP private industry initiative with the support of the Bureau of Animal Industry drafted the Rabbit Industry Roadmap in 2018, declaring the Industry Vision to be recognized as one of the major livestock industries in the Philippines and an Industry Mission to develop the Rabbit Industry through enhanced production technology that will make rabbit production for meat to be an adequate source of nutritious meat and a source of income and livelihood for Filipinos.

This Roadmap was presented to the newly installed Department of Agriculture Secretary William H. Dar in January 2020. The Roadmap outlined what the industry needs to achieve its Mission and Vision, including the infrastructure support and standards needed to position rabbit meat among the mainstream meat sources; with the need for slaughterhouse and National Meat Inspection Service (NMIS) approved standards as priority.

In February 2020, the 1 st National Rabbit Congress was held at the BASC with the theme “Rabbit Meat for Health and Livelihood.” Invitations were extended to government agencies, the academe, and stakeholders that included feed millers and suppliers of biologics. The event was very well attended despite the threat of the pandemic that is already very much a concern

at that time. ARaMP members from Luzon, Visayas, and Mindanao came to contribute inputs on the growth of the industry that the Congress aims to consolidate. President Art’s presentation “ARaMP through the Years”, that summarized ARaMP’s achievements and assessed the organization’s performance was very well received by the members and Congress attendees.

In this event, ARaMP received a pledge of Php 1M from the DOST Regional Director Julius Cesar Sicat for a Rabbit Multiplier Breeder Project in order to upgrade present rabbit breeders used for meat production. The project is now being implemented at the BASC, in line with the Memorandum of Agreement between ARaMP and BASC. In the same event, the groundbreaking of the Rabbit Industry Research Center that the BASC has proposed was also held. A cooking contest participated in by students from different secondary schools in San Ildefonso was held to promote meat consumption in the community. Training on Meat Processing facilitated by the BAI-APDC was also held to benefit ARaMP members and congress attendees.

The African Swine Fever (ASF) that afflicted the hog industry ironically boosted the rabbit meat industry. Apparently, ARaMP’s courtesy call and submission of the Rabbit Meat Industry Roadmap to Secretary Dar in January made an impact, such that, in an interview by the press after an agriculture event, the Secretary made a statement that rabbit meat can be alternative to pork and can help alleviate meat shortage directly resulting from the ASF outbreak. Mass media got excited and curious about the “alternative livestock;” after all, rabbits are popular as pets and not as a meat source. 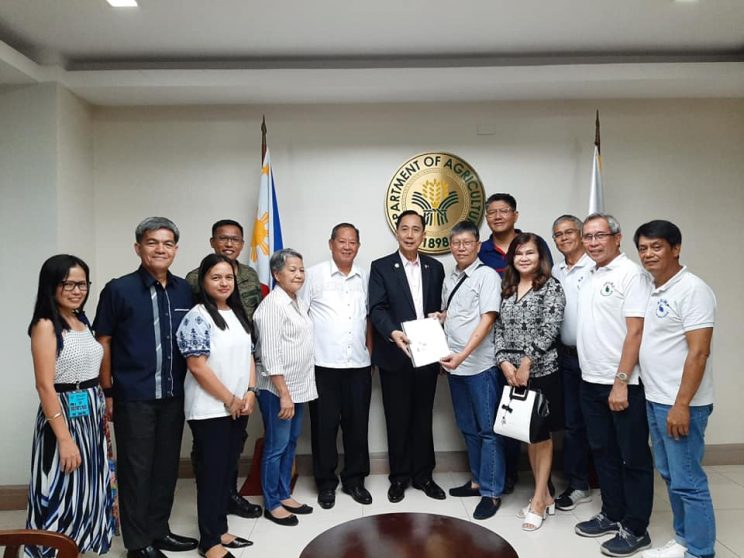 Mass media features, news items, and write-ups about rabbits became frequent and the newfound popularity of rabbits encouraged a lot of livestock raisers, including hog raisers affected by ASF, to venture into rabbit production. The long periods of lockdown that confined people at home encouraged people to look into projects that can be done while on lockdown.

Rabbit production presented a very sound idea, considering the merits of rabbit production compared to other livestock: rabbits only need a small space to grow; quiet and relatively odor-free; easy to grow with feeds readily available; multiply fast and can supply the family with clean, nutritious meat from the backyard; and can provide income to the family.

More and more people are becoming aware of the healthy meat and turning into rabbit industry advocates. Private sector-initiated and government-supported rabbit production seminars and training sessions are being conducted. Indeed, awareness has increased and rabbit meat consumption has gained popularity as evident in social media posts as well as mainstream media news and feature stories.

Rabbit production, with manure and urine as by-products, is being integrated with urban gardening projects as a source of fertilizer. Parallel rabbitry support industries like cage making and feed manufacturing likewise develop with the new livestock industry.

All indications confirm the rise of a new livestock industry. Rabbit for meat has become the mainstream in rabbit raising. ARaMP must consolidate and harness these industry gains to pursue its goals and push the Philippine Rabbit Industry to its full potential.