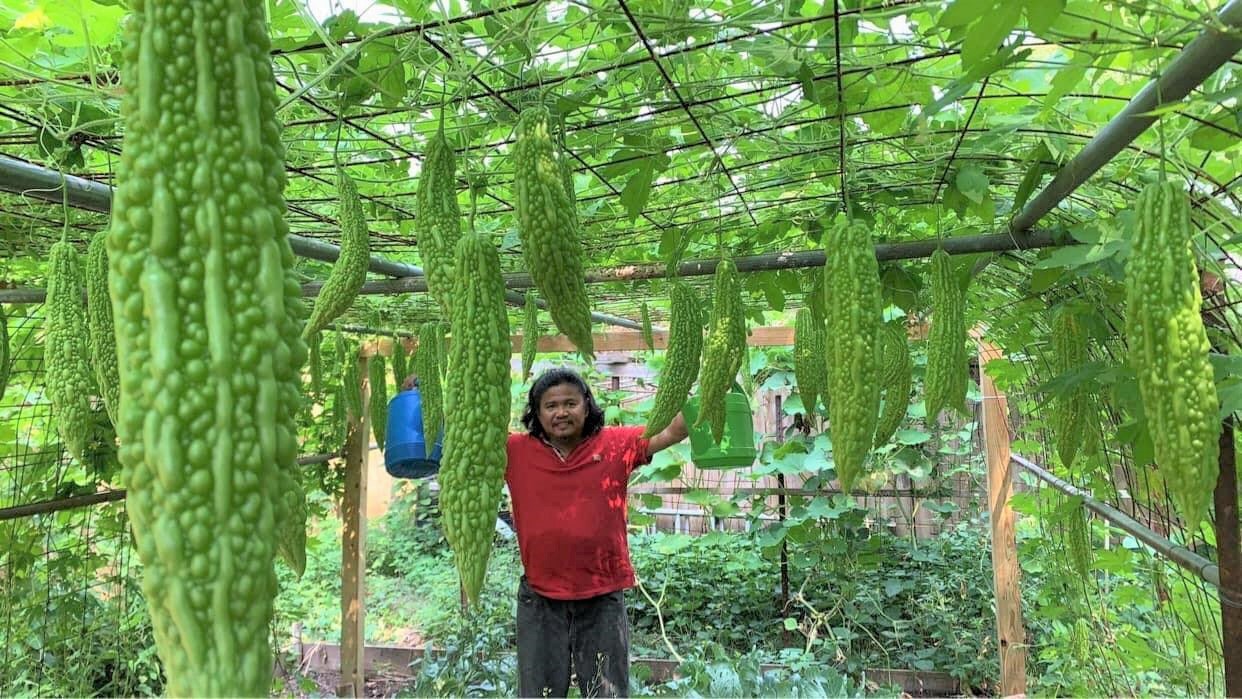 It is not every day that Filipinos living abroad get to see or eat vegetables that they are accustomed to having in the Philippines.

However, some still manage to grow and even earn a profit from the veggies mentioned in the Filipino folk song ‘Bahay Kubo.’

This is also true for Rolando Sison, a naturalized American citizen who keeps a lush garden in Lincoln, Nebraska, United States.

When he’s not working as a welder, Sison can be found in his 15 by 25 meters garden that is planted to singkamas, talong, sigarilyas, sitaw, bataw, patani, upo, patola, kalabasa, kamatis, pechay, malunggay, ampalaya, cucumber, okra, sayote, monggo, tanglad, kangkong, kamote, and a lot more. 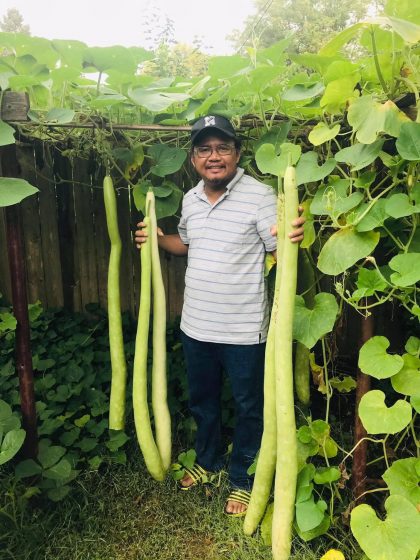 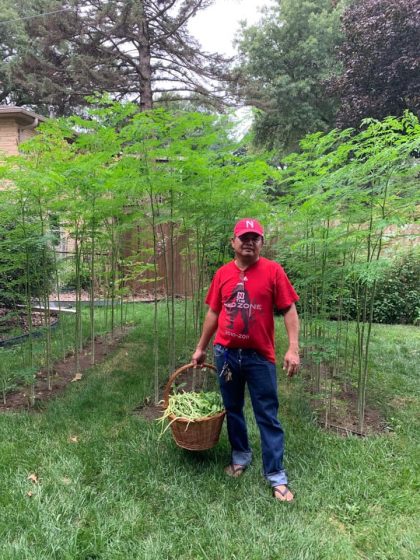 Malunggay flourishes in Rolando’s backyard garden. He sows malunggay seeds in cups every March and transfers them to the ground by April. During winter, he allows malunggay trees to die and he plants new ones again next summer.

He has been gardening since 2009, but it wasn’t until 2017–after he and his wife purchased a home in Nebraska–that he got the chance to plant crops in his own growing space.

And because Asian stores in their vicinity do not always have the freshest vegetables and are quite pricey, he opted to cultivate Bahay Kubo vegetables in his garden about four years ago.

For this grower, the weather is the most difficult part of gardening. His plants in the ground freeze and die at some point during the cold season, which he has no control over. 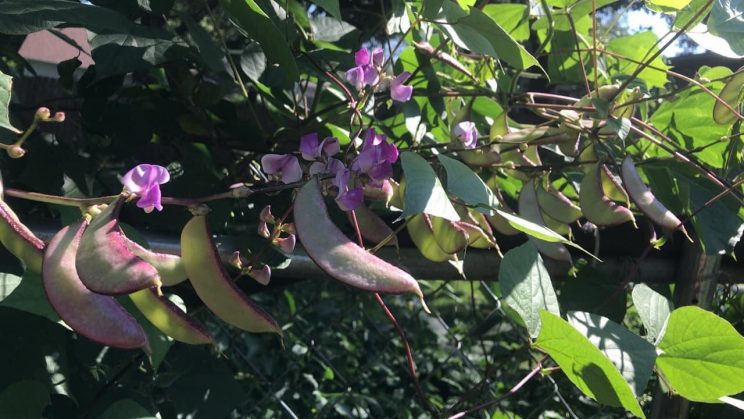 His yearly gardening cycle begins every March with the planting of seeds in cups, followed by the transfer of plants outdoors when they reach a height of four inches. Since he lives in a state with four seasons, his garden is only productive from late April to early October.

Despite the limited time he has for gardening in a year, Sison consistently produces bountiful harvests that are sufficient for personal and commercial use.

To enrich the soil in his garden, he employs composting and turns food waste and other organic materials into rich fertilizer. The watering of plants is carried out twice to thrice a day, depending on the weather.

He also stores rainwater in a plastic barrel connected to the downspout to get additional water and nutrients for his plants. 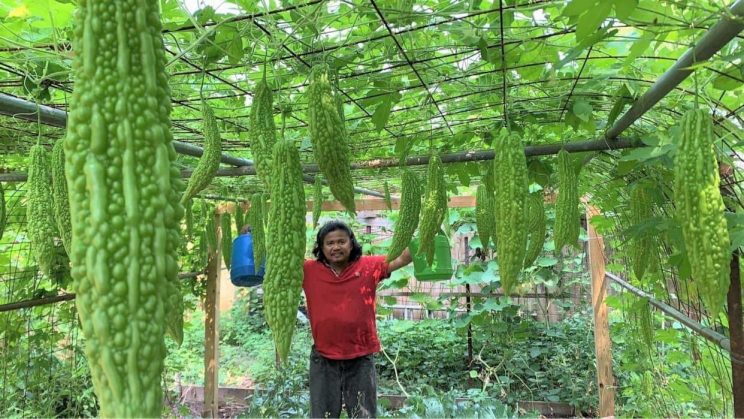 The culprits in the garden

“Japanese beetles destroy jute and okra leaves every morning or afternoon at around 10 a.m. and 2 p.m. I pick and crush them because I don’t use insecticide. Squirrels eat my squash and moringa seeds, so I installed two small devices to scare them.”

He went on to say that rabbits are also his regular garden visitors. “I’ll have to be resourceful so I built a fence and installed a trap. Caught rabbits are then released outside our fences.”

In a way, gardening these vegetables allow Sison to broaden his horizons and help bridge the gaps between cultures.

He not only earns, trades, and shares his seeds and crops with kababayans from nearby areas, but he also gets to introduce and promote the consumption of Philippine vegetables to American neighbors. 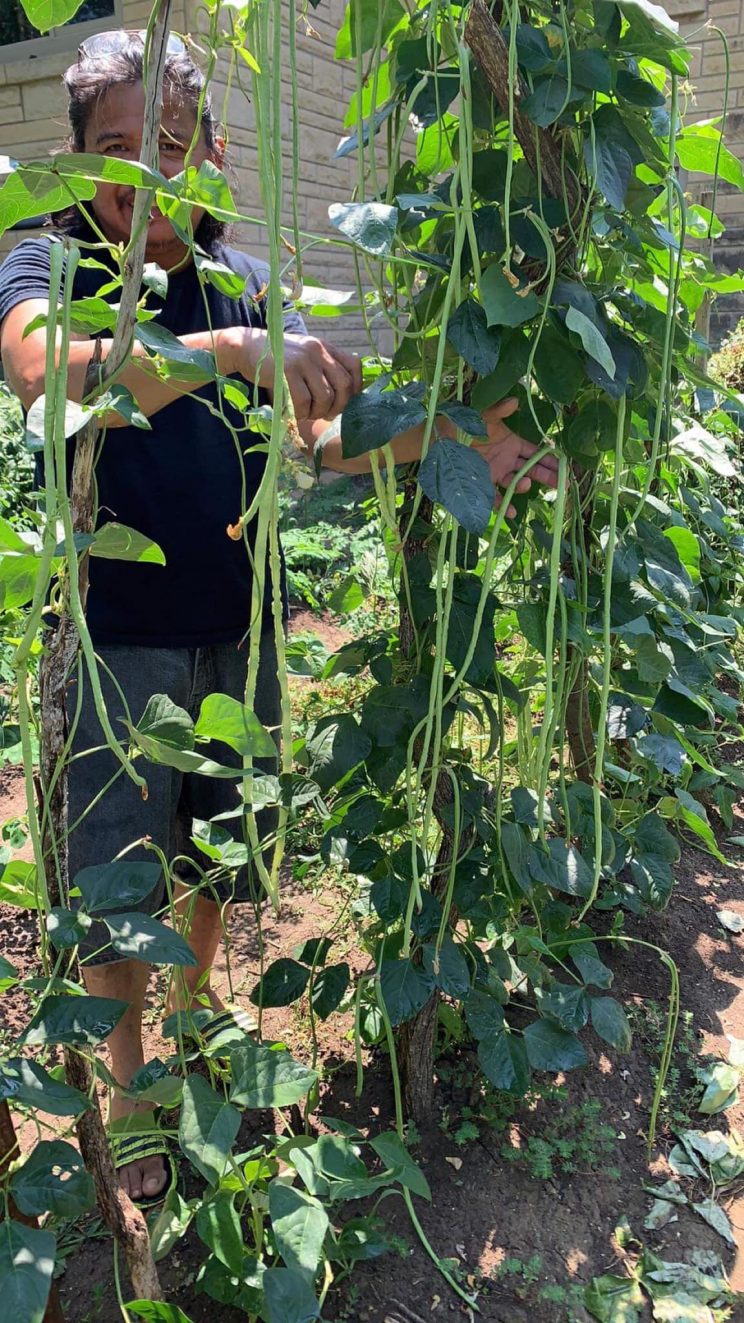 A photo that was taken during the collection of Sison’s sitaw plants last July 2021.

By engaging in online community groups, he also won in a competition under the category of the longest sitaw and ampalaya hosted by the Global Filipino Gardening Ideas and Kitchen Tips Facebook group last 2020.

Philippine vegetables can go places, whether in overcoming racial and cultural divisions or helping indigenous crops gain global recognition. Who knows, the efforts of overseas Filipinos like Sison may soon boost the cultivation and foster the conservation of Philippine flora and fauna.

Some tips on how to grow katuray