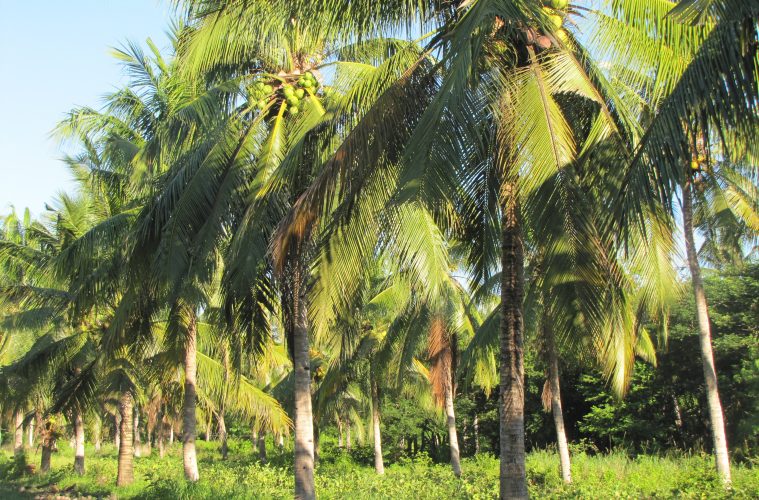 Climate change brings about a variety of implications. While some coconut farms are at risk of flooding due to changing rainfall patterns and rising sea levels, the threat for most coconut farms is drought. Most parts of the Philippines were severely affected by an almost year-long drought from 2015 to mid-2016. Large parts of Mindanao were again affected by a drought in 2019, triggered by a mild El Niño. Besides damage to palms and vegetation, the economic loss and its effect on livelihoods are immense. 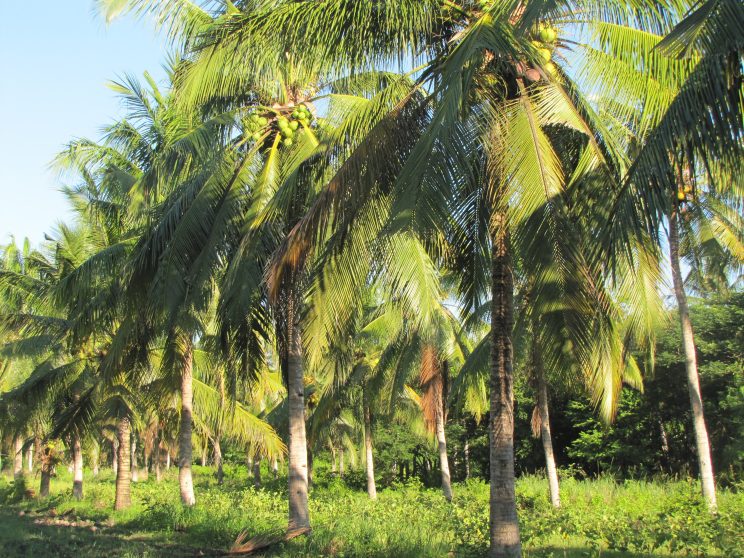 The article ‘Coconut Palms under Climate Stress’ (published on Nov. 14 2021 on this website), describes the potential impacts of heat stress and drought. As temperatures continue to rise, the vulnerability of coconut farms and agriculture in general is expected to increase.

Fortunately, farmers have several options to enhance the resilience of their coconut farms. By resilience, we mean here the capacity of a farm or natural environment to prevent, withstand, respond to, and recover from a disruption. If the soil is in good shape or health, it can absorb and store significant quantities of rainwater and make it available during dry periods. To achieve this, it may be helpful to understand some crucial processes in the soil.

Unfortunately, most soils in coconut plantations are not in good condition. Throughout the years, the harvesting of coconuts as well as the removal of plant residues has reduced the fertility of the soil. Common inappropriate practices such as the burning of fronds, husks and slashed vegetation lead to further degradation. Over time, soils become acidic and compact and consequently cannot absorb and hold much water.

Fertile soil acts like a huge sponge – the soil absorbs and stores water from the rain and makes it available to plants even during dry spells. All soil consists of various inorganic elements such as clay, silt, sand and stones. In fertile soil, these make up about 45 percent of the volume while the pore space which contains air and water comprises about 50 percent. The balance of five percent is organic matter, which chiefly consists up to 80 percent of humus. Plant roots and soil organisms equally share the remainder.

Together with the humus, the activities of these organisms determine how fertile the soil is. Unfortunately, in most farms, the share of organic matter in the soil is much lower than five percent, often only one percent or even less. Consequently, sand or clay make up most of the volume and the pore space is insufficient.

One of the important functions of soil organisms is to decompose organic matter. When leaves (or any other organic matter) fall to the ground, there are already micro-organisms like fungi on their surface that make them soft. This soft organic matter will be further decomposed by other microorganisms or be consumed by animals on the ground such as millipedes, worms, and many others. Through a gradual process, the organic material will eventually be transformed into humus.

Although humus is only a small percentage of the soil, it determines how fertile the soil is. Compared to organic matter, it is stable in the soil. It is no longer subject to the activities of decomposers and cannot easily be converted or broken down to other substances.

One important group of soil organisms are mycorrhizae, which means fungus root. Like many plants, coconut palms are engaging in this symbiotic, that is mutually beneficial relationships with fungi. The mycorrhizae are like hairs growing on the root and considerably extend the reach of the roots. While growing in the soil, mycorrhizae connect small soil particles aggregates. By this they contribute to a soil structure and improve the retention of water in the soil.

Consequently, they help the host plant to cope with water stress and improve the chances of plants to survive drought. Besides, they help plants to obtain nutrients such as phosphorus.

Together with the stored humus, the mycorrhizae give the soil a sponge-like structure which enables the soil to absorb considerable quantities of water. That is why fertile soil has an amazing water-retention capacity. According to the Natural Resources Conservation Service of the US Department of Agriculture (USDA), every one percent increase of humus makes per hectare as much as additional 200,000 liters of water available to the crop.

This is an important insight: Good and healthy soil acts like a giant sponge. The more organic matter, the more humus, the higher the capacity to hold water. This goes along with the capacity of the soil to supply nutrients to plants in adequate amounts and in suitable proportions.

Soil fertility is the result of various biological and chemical processes in the soil which facilitate the accumulation of humus and ensure the growth of plants. However, the fertility of a soil is not a stable condition. Farmers need to assure a regular supply of organic matter, which helps to cover the soil and which will gradually be transformed into humus. Therefore, farmers should feed the soil so that it will take care of the needs of the plants above.

All living things are made of carbon. Carbon is part of the air, plants, the soil, oceans, and even rocks. Because life on earth is dynamic, carbon does not stay still. It is on the move.

In the atmosphere, carbon is attached to oxygen in a gas called carbon-dioxide (CO 2 ) and as we know, there is too much of it in the air. On the other hand, there is not enough carbon in our soils as humus is often reduced as the growing vegetation draws energy from the humus stocks and poor practices do not replenish it.

During the process of photosynthesis, plants pull carbon from the atmosphere into their leaves and turn it into sugar. Some plants are eaten by animals, so carbon moves from plants to animals.

When dead plants and animals decay, carbon is integrated into the soil in the form of humus. Humus, usually of black color, consists of about 60 percent carbon and six percent nitrogen. Interestingly, whatever the original organic matter, the ratio of carbon to nitrogen in humus will be ten to one.

Even if humus comprises only a small part of the soil, it benefits soil structure, porosity, and  water holding capacity immensely. It binds inorganic microparticles of sand, silt, and clay together to form microaggregates and by this creates pores which can hold water. In addition, it reduces the acidity of soils and as a result improves the pH value. In short: humus is the key to healthy soils.

Another way of looking at it: Humus is nature’s way of storing energy from the sun in the soil. We could compare soil containing a lot of humus to a giant fully charged battery. There are two ways the sun’s energy moves into the soil. First, the carbon contained in humus is created during photosynthesis. With the help of chlorophyll in the leaves and the presence of carbon dioxide and water, light energy from the sun is converted into glucose, a kind of sugar (bio-chemical energy) and oxygen. This (bio-chemical) energy is used by the palm to grow and to mature the coconuts. Old fronds and other parts of the palm fall to the ground and decay. Much of the contained energy is preserved in the humus in soil.

Second, a portion of the sugar produced during photosynthesis is moved down in the stem to the roots and then leaked into the soil. This energy is absorbed by soil organisms. When they die, they become humus too.

The insights from soil biology and soil ecology indicate that we need to rethink traditional approaches. First, healthy soil functions as a living system which regulates itself. Second, fertile soil has the ability “to feed plants.” Therefore, farmers need to nurture the soil so that the soil will feed the plants and take care of the water needs.

To support the processes in the soil, its surface should always be covered by plants or residues. A diversity of plants, animals, and organisms on top supports a diversity of lifeforms below. Moreover, a dense cover of plants in the farm enables an optimum of photosynthesis to help increase the humus in the soil. This is the main key to climate resilient farms.

Appropriate practices to enhance resilience and to adapt to the threat of severe weather events will be discussed in the next article.

The content of this article relates information covered by the curriculum Climate Resilient Coconut Farm Management designed for a three-day farmers training. The curriculum is available at: https://snrd-asia.org/climate-resilient-coconut-farm-management/