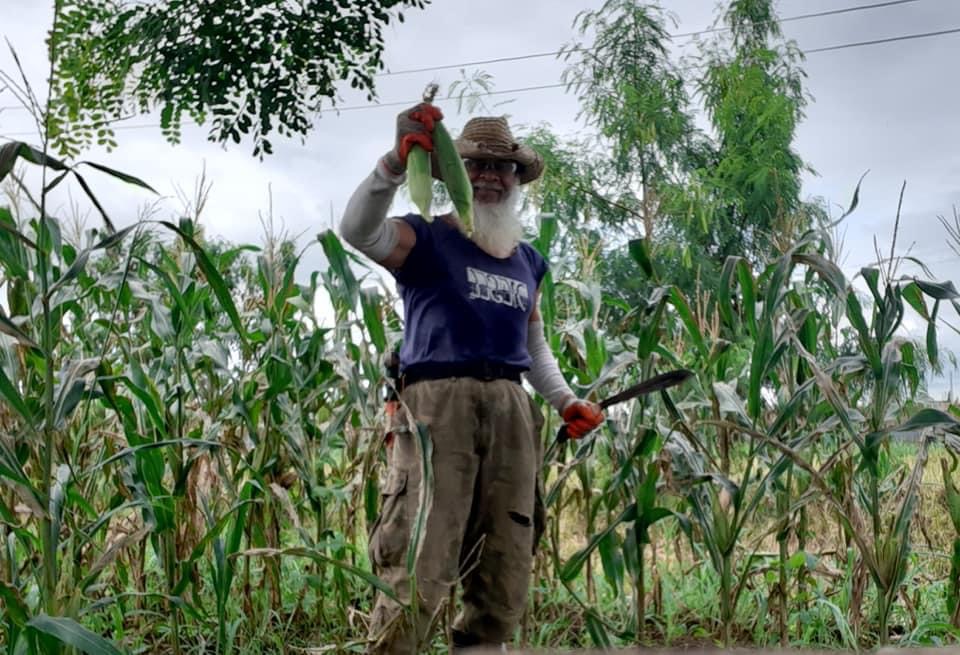 Jungco holds up an ear of corn that he says is the right age for harvesting.

This is what Philippine Air Force Brigadier General Rolando Jungco did when he retired in 2019 after serving 38 years in the Armed Forces of the Philippines (AFP) and five years in the Department of National Defense.

He and his family moved to Lipa, Batangas and built a house on land he had purchased in an AFP-owned subdivision. “This was full of cogon grass, so we had to contend with snakes and other reptiles,” he says in Taglish. “So I had to clean up the area. Then I got an idea. Why not plant on the unused land?”

He calls the land he cultivates his “sidewalk garden.” 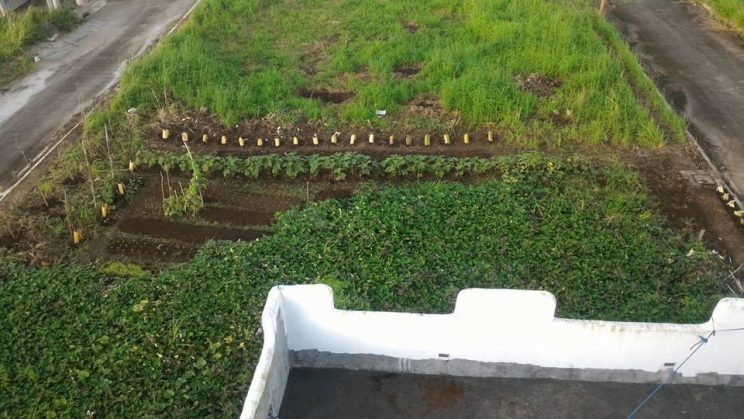 Jungco was born and raised in Fort Bonifacio, back when it was still an army camp and not the Bonifacio Global City people know today. His father was a soldier who worked in the Special Intelligence Training School. “There was unused land behind the building he worked in, so we cleared that and started cultivating,” Jungco says.

They raised pigs, chickens, and grew crops like gabi, pechay, and tomatoes for their dinner table. Jungco used to accompany his father every morning to maintain the garden. His mother also planted ornamental plants around their home. “This has been my interest ever since,” he shares.

He followed in his father’s footsteps, not just by joining the army, but also by cultivating a garden around his army-issued home. Their crops read like a grocery list, and included pechay, radish, cabbage, eggplants, tomatoes, okra, squash, and ampalaya. “My wife seldom needed to go to the market for vegetables,” he says. “When I retired, we left the air base but my farming continued.” 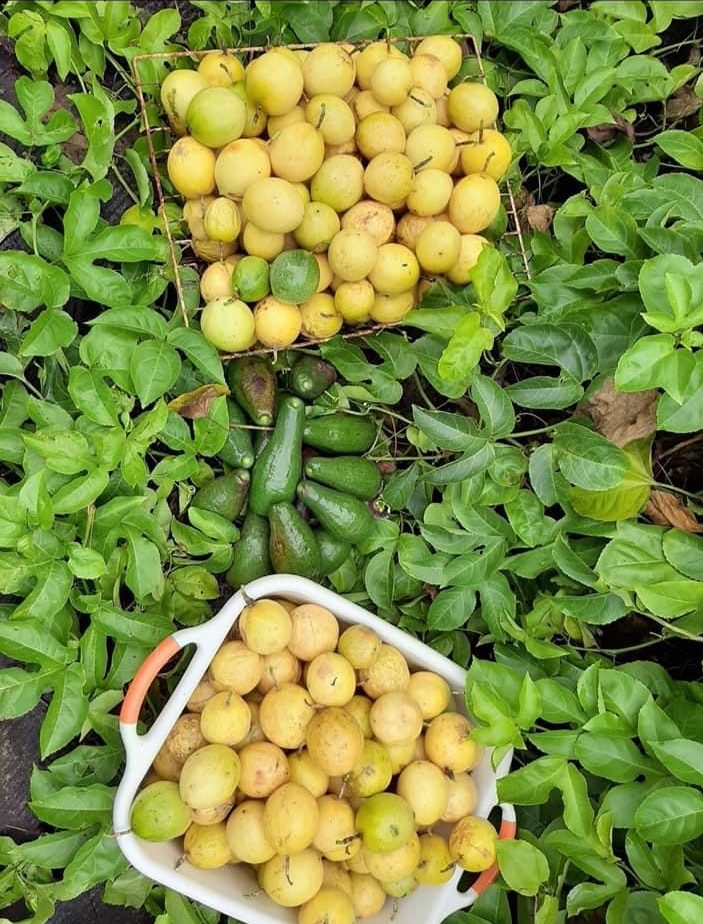 A harvest of passion fruit and avocados.

For the benefit of the community

Jungco was one of the first residents in the 18 hectare subdivision, which, as of the interview, only had six homes built. He knew some of the owners of the lots surrounding his house, so he asked them if he could grow crops on their land. They said yes.

For a short time, he also worked with local farmers who were allowed to plant crops like tomatoes, radish, and string beans on idle land. This ended in early 2021, when the subdivision’s management changed hands and the practice was disallowed. Those areas have since been overrun by cogon.

Jungco and his wife still grow crops around their house, and this is where they get their food on a daily basis. Maintaining a garden filled with vegetables, fruit trees, and herbs has also proven highly beneficial during the pandemic.

Aside from having access to food, the greenery has helped their mental wellbeing and has kept the two grandkids who live with them occupied. “It’s fun because every morning, my wife and our grandchildren pick what we’re going to cook,” he says. “I drink sambong and tarragon tea (from our garden) every night. I give visitors cuttings to take home.”

Jungco’s plants extend to about 1000 sqm, stretching over lots owned by other people. No one’s complained about it, especially since anyone who owns a lot in the subdivision is allowed to harvest from the communal garden. “Some were so happy just to be able to harvest their own food,” Jungco shares. “You know how you have to pay to harvest strawberries in La Trinidad, Benguet? Here, we let lot owners pick vegetables for free.” 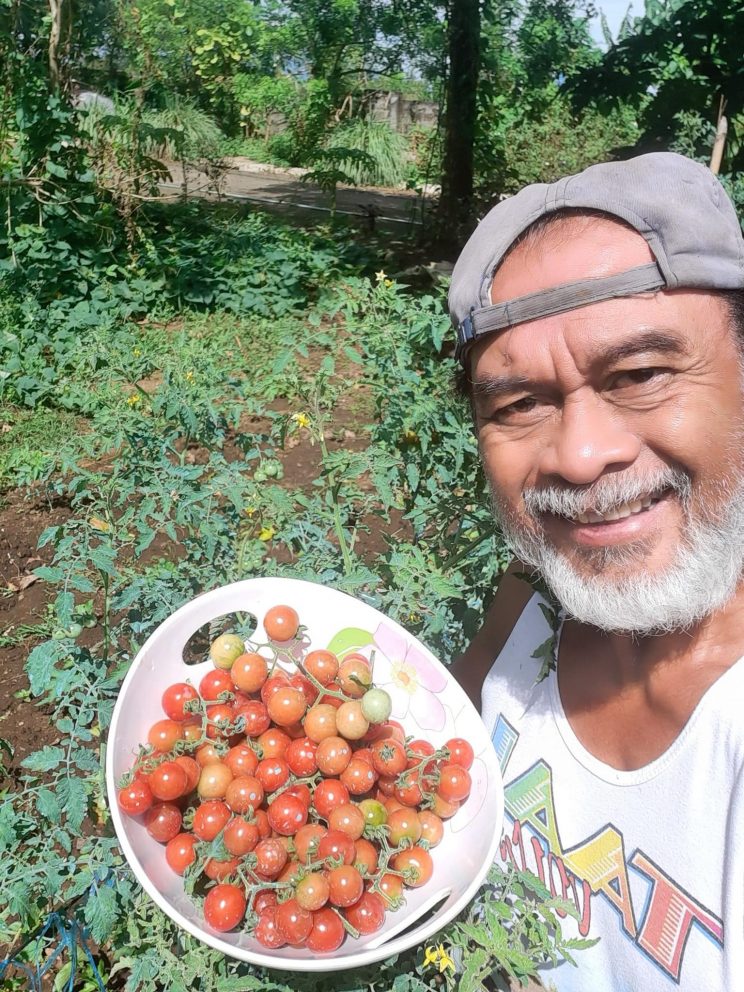 Jungco poses with a harvest of cherry tomatoes. This photo is captioned, “from the garden to the table with no traders in between (and) no tag price to worry about.”

Educating the next generation

Jungco’s grandchildren also enjoy spending time in the garden, especially since they haven’t been allowed to leave their residence during the pandemic. “They get to see all the bugs,” Jungco says.

He bought them a transparent bug box where they can observe insects. “I found praying mantis eggs on a branch. I put it in the bog box and my grandchildren got to see how the praying mantises came out of the eggs. I said they are friends. They help us protect our plants, so we will let them go. So we went to the garden and they  let all the praying mantises escape from the bug box into the plants.”

The kids also learned to appreciate other insects like ladybugs and grasshoppers. “They know what’s safe to touch and what to stay away from, like hairy caterpillars,” Jungco says. “I taught them that.”

Other life forms are equally sacred. “When we catch snakes, we don’t kill them. I let them go far away from the house,” Jungco says. “We also pick flowers, This is what life is like around my sidewalk garden.” 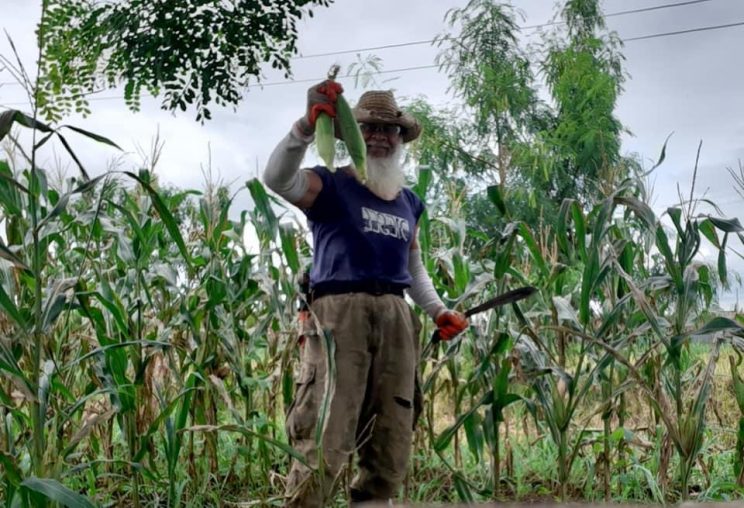 Jungco holds up an ear of corn that he says is the right age for harvesting.

The biggest challenges Jungco’s garden faces are damages brought about by annual typhoons, which have only gotten worse with the climate crisis. To prepare for a typhoon, Jungco says that they “secure what we can and pray that (the storm) isn’t too strong.”

He says that typhoons Jolina, Ulysses, and Rolly have been especially devastating. “But of course, you just fix things one by one, then plant again” he says. “Jolina cut down my banana trees, and it will take about six months before we can harvest saba banana from the new ones planted.”

A lot of his farming knowledge comes from his experiences growing crops as a child and when he was in service. He also researches cultivation techniques in books and online, and seeks advice from farmer friends.

He tries to cultivate as naturally as possible. “I use chicken and cow manure as fertilizer and I have neem trees, which I use as both fertilizer and insecticide,” he says. “I’m transitioning to organic farming and studying companion planting.”

Another challenge has been the COVID-19 pandemic, which Jungco has tried to turn into opportunities for the family to further appreciate the bounty of the garden. He set up a picnic area where the family gathers every afternoon when weather permits. “There’s a tomato field on one side and squash on the other,” he shares. 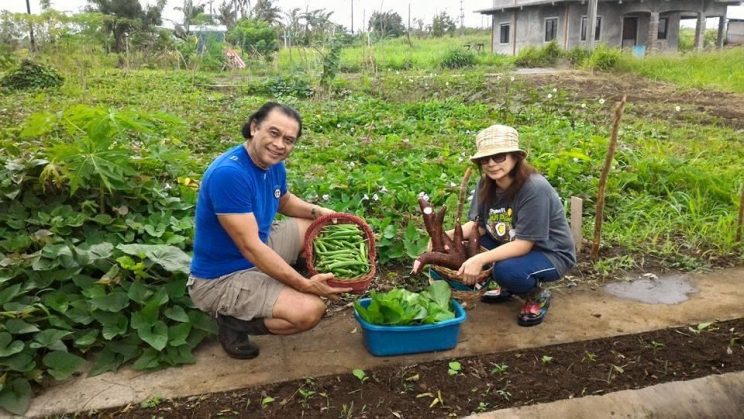 Jungco and his wife posing in front of their fresh harvest. The post is captioned with “Magkano kaya lahat ito (How much do you think all this costs)?”

The benefits of growing your own food

Jungco estimates that the family saves around 20% of their grocery bills just because they grow their own fruits and vegetables. “Ginger is so expensive!” he exclaims. “ I have my own ginger here. I have cabbage, radish, scallion, talong, okra, and papaya.”

Growing his own food has not only ensured that Jungco’s family never had to go hungry, it’s also brought him a lot of joy. “You get to see the product of what you planted. For me, when you plant a seed, you are planting hope,” he says. “That hope grows and you have to nurture it so it gives you what you want.”

He cites his five atis trees, all grown from seed, as an example. “Every year, I can harvest 200 0r 300 atis,” he says. “When you can propagate the seeds you planted, that’s your hope materializing. You’re seeing the return on your investment.” 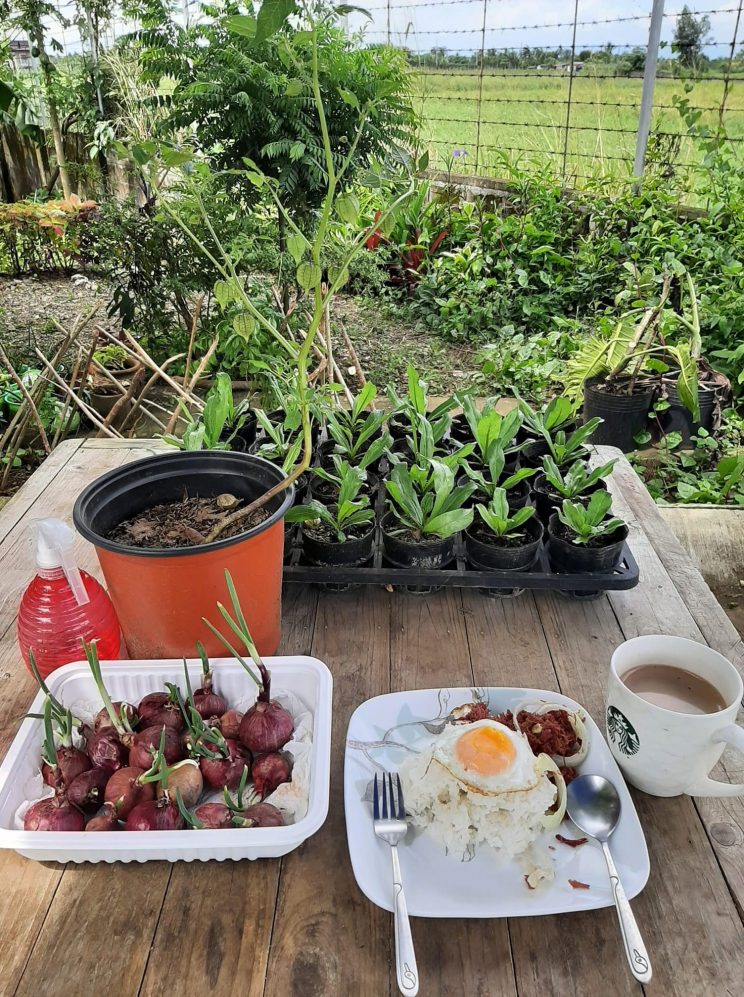 A dream of a food secure future

It pains Jungco to see a country so food insecure yet allowing so much potentially fertile land to go idle. “Why is everything, especially agricultural products, so expensive nowadays?” he asks. “And yet when you look around, you see a lot of vacant lots.”

He cites his garden as an example. “If I hadn’t cultivated this, there would be nothing for my family to harvest, and we wouldn’t be able to go around because this would all be wid grass. But now, we enjoy bountiful harvests and pretty flowers. Those are the products of cultivation.”

Jungco believes that a lot of people would benefit from the utilization of idle lands for food cultivation. “I don’t want to compare, but when my wife and I visited Vietnam, when we traveled from Hanoi to Halong bay, we never saw empty land. Everything had plants. If it was rocky land, it had ducks and goats,” he shares. “Here, we have a lot of vacant land that isn’t being put to use. For me, if you throw a seed away and it grows into a tree, you’re helping nature and also helping the economy.”

He adds, “We have a lot of idle land. It would be nice if we could grow things on it.”

PCAARRD’s campaign boosts awareness on the science of food production