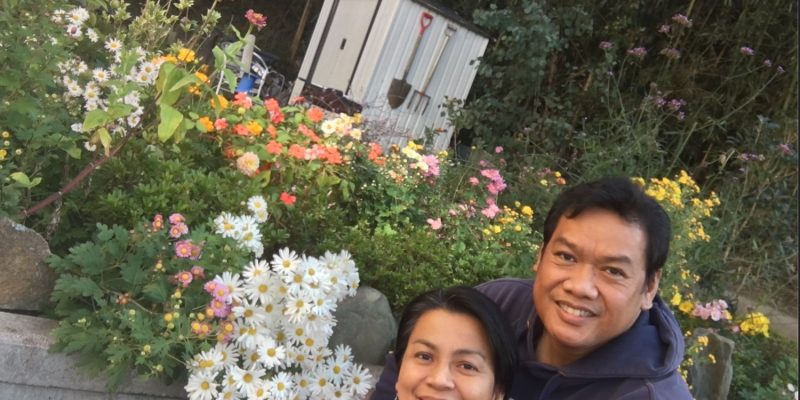 Many Filipinos who have chosen to live outside the Philippines have found a way to bring a little piece of home with them by planting Filipino vegetables. Others take advantage of their new climate to plant the kind of garden one sees in Western picture books.

This couple based in Japan has the best of both worlds as they plant tropical vegetables alongside temperate fruits and flowers for a mix of Filipino, European, and Japanese blooms.

Jing and Myra Villareral are educators based in Tsukuba, a city in Japan’s Ibaraki prefecture, about an hour and 20 mins away from Tokyo. Filipino kids who grew up in the 80s will recognize Tsukuba Center as where part of the beginning credits of the TV show “Choudenshi Bioman” (shortened to “Bioman” in the Philippines) was filmed.

Jing is a teacher who also manages a department in the high school he works for. Myra is an associate professor at the University of Tsukuba. They’ve lived in Japan since 2007 and have been maintaining their current garden since 2019.

Their house has about 250-300 sqm devoted to plants. The front is planted with different flowers, including different varieties of roses, clematis, and Spanish, English, and French lavender. “In summer, the place is just abuzz with bees and it smells so good,” Myra says. “I hate it [in the winter] because everything’s barren… but the lavender and rosemary, they’re beautiful even in winter. That’s the main reason we planted them.”

The clematis are placeholders for boxwood plants (Buxus), which take some time to mature.

Planning makes perfect (most of the time)

Japan has four seasons, so the Villareals, who aren’t used to planting in a temperate climate, get a lot of cultivation tips from the BBC show “Gardeners’ World.” “The most important thing that we learned from that program is planning. If you want a beautiful garden all year round, you need to make a plan,” Myra says. “You make sure that… you know where they are or else you might step on them.”

Labeling where seeds are planted are important, especially if one is growing a flower garden where everything blends into each other. “I planted freesias for the first time and I have to label them because I might plant tulips over them,” Myra explains.

One can also plan one’s flower garden according to when certain plants bloom. In the Villareals’ case, it’s daffodils, tulips, then daisies. “The daisies are really beautiful because… they will come early in the springtime, even if it’s just February,” Myra says.

“North pole daisies are really beautiful. The bees would start to come to our garden as early as February March. Then the tulips will come out and you have all the other flowers. Of course, you have to think in advance so you have to plant them strategically because you might have one area with flowers and one area without. You have to scatter them.”

There’s a certain uncertainty that comes with growing a flower garden. The Villareals think this is part of the fun. Jing talks about the suspense of not knowing what colors some flowers are going to be until they bloom: “That’s difficult because you don’t know what they look like, so you’re planting in your head that they’ll look like this and then it comes out [different from expected].”

A life-long love affair with plants

The couple have been gardening even before they moved to Japan. Myra has a bachelor’s degree in Agriculture from the University of the Philippines, Los Banos, a background that has served her well in her gardening journey. “If you learn about something, you don’t forget it, especially if you took an exam for it,” she quips.

But her love for planting started even before she earned her college degree. “Ever since I was a child, I’ve always planted something. I remember I used to plant ampalaya and sili around our house in Naga because I’m Bicolana… When we got married, we lived in Candelaria so I started planting basil and impatiens.”

Jing hadn’t been interested in gardening before he met Myra, and it was through her that he discovered that he, too, shared this passion. “I actually hated it. When I was younger… we had a really, really big garden because my father liked gardening. I hated it,” Jing shares.

His interest in gardening was so sudden, it surprised his family. “I remember [Jing’s] brother asked me, what did you do to my brother? Why is he into gardening now?” Myra shares with a laugh.

Myra has influenced at least three other people to take up gardening as a hobby. “If we can get more people to garden, that can be really good, especially since we have global warming,” she says.

After Candelaria, the couple moved to Marikina, where they kept ornamental plants in pots, then to a small apartment in Japan before settling in their current home.

While Myra’s gardening knowhow comes from experience and study, Jing’s comes from what nowadays is a more common source: YouTube. Myra would watch with him, and she noticed that, “a lot of them are helpful but a lot of them are also saying things that don’t make sense in a scientific world,” she says. “ [TV shows like] “Gardeners’ World” has a lot of researchers. They’re real gardeners…. Those people who would [give advice] from their experience are more reliable than people who will claim that they’re experts.”

In front of the parking area is what the couple calls Myra’s English Garden.

The Villareals take advantage of Japan’s four seasons to experiment with planting different blooms. The interview took place in autumn, with chrysanthemums in bloom. The previous summer, they had salvias, verbenas, violas, and pansies. “They make great ground cover against weeds,” Myra shares. “You plant them in winter and they would be growing profusely and by springtime, before the weeds sprout, they’ve already covered the ground. You’ve basically managed the area so weeding will be minimal. Otherwise, weeding is really a headache.”

She adds, “A challenge is we’re practicing organic gardening, so we really have to fight all the weeds and caterpillars. I can’t kill them, so I just pick them and move them.”

They don’t use synthetic chemicals or pesticides. They amend their soil with garden compost, which they make themselves using garden refuse and paper scraps.

This summer they plan to add zinnias and impatiens, also called touch-me-nots, the latter a plant Myra used to grow in the Philippines. They also have kiwi, wild strawberries, blackberries, blueberries, raspberries and gooseberries, and different kinds of mint.

To the side of the house is a lawn area where, before the pandemic, the Villareals used to host picnics and barbecues with friends. “That area is a bit shaded so we plant shade-loving plants. We have an osmanthus tree. Osmanthus smells like orange… It smells really nice in autumn.”

They’ve also planted apple, cherry, nectarine, and orange saplings, which will take some time to grow.

There are also raised beds currently planted to asparagus which have been growing for three years and will be ready to be harvested in the spring. There are also plots for carrots, which are cycled with edamame (soybeans) to keep the soil healthy.

They’ve also planted potatoes, zucchini, fennel, as well as onions and garlic. “Winter is quite long and you basically can’t plant anything. But you can plant onions and garlic over winter [to be harvested before summer],” Myra says.

They also have a bed for herbs, which they’ve used to plant alugbati. This isn’t the only Filipino vegetable the Villareals grow. Even if they live in Japan, they get to enjoy kangkong, kamote (sweetpotato), kalabasa (squash), ampalaya (bitter gourd), and sitaw (string beans). “You can tell what we cook at home,” Jing jokes.

Not only does growing their own food mean they can enjoy Filipino dishes at home, it also means significant savings , especially in a country where everything tends to be expensive. “During summer, we rarely buy vegetables from the supermarket. We just grow them,” Myra says. “And food waste is really minimized.”

Gardening offers life lessons as well. “For me, more than the savings, gardening teaches me patience because you have to wait,” Jing says. “When you plant something, it’s usually tiny, but you have to imagine how big it will be to give it enough space. It teaches you how to imagine how things will look after a while. Also, I like to try new things, and that’s interesting with gardening because there’s no one rule. I like to experiment. There’s nothing wrong with trying and seeing if it works.”

The Villareals have a 19-year-old daughter studying in Osaka. She hasn’t yet shown an inclination towards her parents’ hobby, but she did bring a plant from home to care for while in university. “It’s [a cactus] called Cactus Villareal. All our plants have names. [Like] Clematis Villareal,” Jing says.

“We wanted her to have something to take care of,” Myra says. And with all these mental health problems going on, taking care of a plant will give you something to always look forward to. We gave her a cactus [because it’s low maintenance.”

The couple love gardening, not only because of the beauty the flowers offer and being able to cook Filipino dishes in Japan because of their harvests, but also because it provides them with exercise and stress relief.

“I’ve found that it’s very relaxing, especially in an environment where work is very stressful… if you’re teaching, it’s very stressful, with lots of deadlines… Spending [time] in the garden really relaxes me,” Jing says.

“I love seeing things grow. The actual gardening itself is very relaxing… You can experience the effort you put into this activity in fruits that you can eat and flowers that make you happy… It’s the best way to de-stress and also saves you a lot of money because once you grow a lot of vegetables, you realize that the investment also pays off because vegetables here are very expensive. And it’s always fresh. You will get it right before you cook it,” Myra adds. “It’s happiness, mental health, and saving money.”

READ: The Villareals share tips on growing tropical crops in a temperate climate