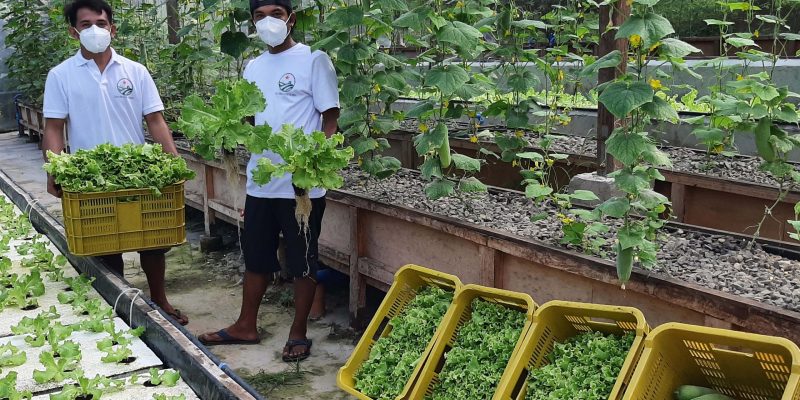 Second Earth Farms, located in Pililla, Rizal, is an aquaponics farm that grows a variety of crops in different aquaponics systems that are tailored to the demands of the plants.

Every farmer begins by selecting a farming method that matches their needs, goals, and resources. Some favor the conventional way, which may require more work and thus, workers, while others prefer a less labor-intensive option.

Although he wasn’t sure what approach to use then, he was certain that what he wanted was “something that’s easier, requires less manpower, more sustainable, produces higher yields, demands lower overhead expenses, and has a system that is very versatile, and not boring.”

He found all of these things in aquaponics.

At first, he used small-scale aquaponic systems. After realizing how fascinating it was, he went for larger aquaponic set-ups. Hizon, an ophthalmologist, enjoys reading journals about medicine, which is something he also used in learning aquaponic farming. But unfortunately, reading books and journals wasn’t enough.

“During my aquaponic system trial, I have encountered so many problems that were not in the books and journals that I have read. YouTube only taught me the fundamentals of starting aquaponics, but it lacked in-depth information that I desired, so I decided to take courses overseas.”

He also attended international conferences where he met aquaponic growers from all over the world.

“I have also connected with some businessmen from Canada who started an aquaponics business here in the Philippines, specifically in Benguet, where I was able to gain more experience and knowledge from,” said Hizon.

All of this eventually led to the creation of his 500-sqm aquaponics farm, Second Earth Farms, in Pililla, Rizal.

Armed with deeper knowledge in aquaponics and stronger support from his network, Hizon decided to upscale his aquaponics systems and invited two investors to his enterprise.

After two to three years of operations, people started to notice their work.

“We were approached by people who wanted our system in their homes and farms. That was the time we shifted our direction from [only] producing vegetables to [also] helping people have their own aquaponics set-up at home and manage their own businesses using our system.” One of Second Earth Farms’ aquaponics systems is this outdoor aquaponics type.

Second Earth Farms offers aquaponics systems that are designed for different spaces and usage. They have developed systems as small as 2ft x 4ft for home or condo use or as large as a 500-sqm garden or farm.

“We cater our systems according to our client’s needs and wants. No system is alike. Every system is somehow customized to the clients’ preference,” said the owner. Aquaponics is the method of raising aquatic animals (aquaculture) and plants in water (hydroponics). This does not demand heavy upkeep and it saves water, too, because it does not need regular watering as traditional farming does.

Hizon explains, “We developed a system where it is more or less automated and no manual filling of water is needed.” He adds, “With the 500-sqm greenhouse I have, we only spend about P500-P700 pesos a month on water. I have not replaced the water in my system for about four years now.” Different varieties of lettuce like lollo rossa (pictured here) can thrive even in lowlands using aquaponic systems, provided that their requirements are still met. The farm’s cherry tomatoes are cultivated on the sides of the greenhouse.

“We are constantly experimenting with different kinds of plants to grow on our aquaponic systems so we can advise our clients which ones are ideal to grow based on their market.”

The farm uses filtered and processed fish waste as plant fertilizer. This allows them to save on synthetic chemicals and prevents them from harming their fish and, by extension, their consumers.

The aquaponics farmer said that every gram of fish feed is calculated for every square meter of the system and type of plants grown in it. This ensures a proper balance between fish feed and plants’ nutrient uptake, allowing the system to function smoothly and sustainably.

They primarily raise tilapia in aquaponics, but they are also experimenting with other fishes such as carp and catfish. Tilapia is the most common fish on the farm. They have roughly 800-900 pieces of tilapia as of this writing, and they also breed their own to make their fish more sustainable.

The major challenge that comes with aquaponic farming

Although aquaponics has provided Hizon with a lot of opportunities, it has also presented him with new difficulties.

According to Hizon, building a small system is one thing, but running an aquaponics system and making it sustainable for years is another.

“For one, no one here in the Philippines has the specialization to manage and teach the technology. I had to go abroad and source out the knowledge that I needed to run a proper system.” This is the 500 square meter greenhouse of the farm where crops are grown.

“I wanted our system to be almost as perfect as it could be before we offer it to our clients. So to solve the issues, we built different systems for aquaponics and tried to perfect it for over three years before offering it to them,” Hizon said, adding that this is their competitive advantage over other agribusinesses.

After years of studying and exploring aquaponics in and outside of the country, Hizon continues to reap the benefits of his hard work and shares it with others so they, too, can make money and food from the systems he built.