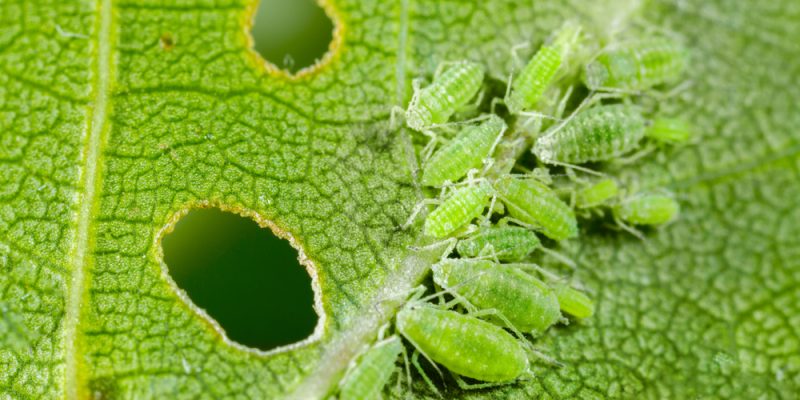 Aphids are small sap sucking insects with around five thousand identified species. Of these, four hundred species feed on agricultural food and fibre crops, and as such are considered an important and destructive agricultural pest. They reproduce quickly; instead of laying eggs they birth live nymphs, who sometimes are, somewhat terrifyingly, already pregnant at birth with the next generation of aphid nymphs even without male impregnation. The speed of their reproduction is what makes aphids a particularly destructive agricultural pest, as they can quickly overwhelm plants through sheer hungry numbers. 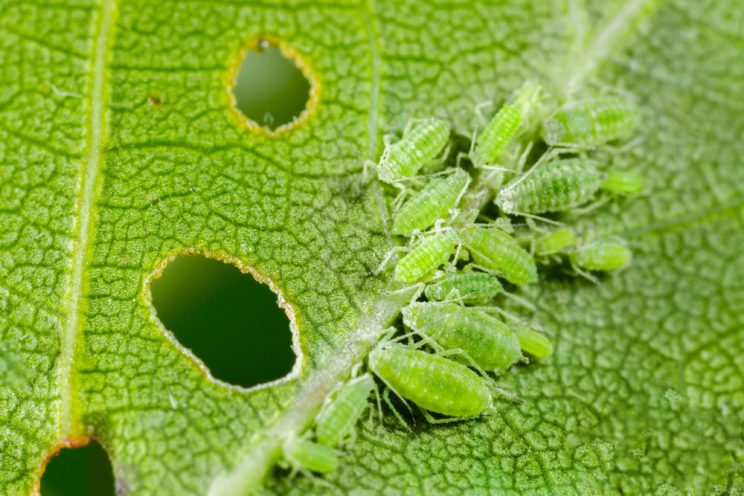 Aphids come in a wide variety of colors, mostly green, brown, or black, but they can be pink, orange, or even covered in a cottony wax. Their bodies are pear shaped, with six slender legs, and two hornlike protrusions on their rear called cornicles. They are usually sedentary, their soft bodies clumping together in large feeding packs with little movement.

Aphid damage is wide: a large population of aphids feeding on plant sap weakens their plant host and increases the host’s susceptibility to other pests and diseases. Aphids can also transmit diseases such as viruses by feeding on a diseased plant then feeding on a healthy one. Some aphids produce a sugary substance called honeydew as a waste product; this substance invites mold and bacterial growth which can further damage the host plant.

It is somewhat easy, if fairly tedious, dear reader, to control aphids on a small scale. For small farms and gardens, their sedentary nature makes it easy enough to remove them with a solution of water and a mild soap such as Perla. Froth the soap in water until it is soapy enough to blow bubbles with, then use a soft and soapy bristled brush to scrub your plant free of aphids. Do note that aphids like to hide underneath leaves where it is harder to get at them. The soap solution may also be applied with a high pressure spray to dislodge their bodies, being careful that the pressure is not so strong as to damage the plants themselves. Spraying down aphids also has the added benefit of being a fun family activity, especially for young children who might fancy themselves marauders shooting down enemy invaders.

The tedium however, comes from the need to continuously apply your soap solution every single day for around fifteen days at least; aphids reproduce so quickly so even a small group of survivors can repopulate back to pre-treatment levels in a matter of days. By treating the plants everyday the risk of survivors which can quickly re-infest your plants is significantly lessened.

On a wide scale though, aphids are annoyingly difficult to control. Common synthetic aphid controls include contact pesticides like malathion and permethrin. Some aphids however, cover themselves in a cottony wax to protect themselves from these contact pesticides, so in such cases systemic pesticides are used, such as imidacloprid. Petroleum-based or plant-based insecticidal oils like pryrethrin or neem are another option for aphid control. Pryrethrin oils work by smothering the aphids and killing them through suffocation, while neem is a systemic oil that when ingested by aphids prevents them from molting. Due to their quick reproduction, however, aphids easily gain resistance to pesticidal controls. As such, using pesticides as a primary method of control is an exercise in futility.

An effective form of cultural/mechanical control is to prepare a trap barrier between your crops and potential sources of aphids. As mentioned earlier, aphids are quite sedentary, and tend to continue reproducing until the current host is unable to maintain their population. When new aphids are unable to find comfortable living space on their current host plant, some will birth winged offspring, which will then fly off to infest a new host. These winged aphids are generally terrible fliers, and usually depend on the wind to carry them around. Thus, putting up a wind barrier of strong fine meshed net in combination with a hedge of trap plants will capture these flying aphids and reduce the chance they will infest more important crops. Sunflowers for example, are an attractive choice for trapping aphids, what with their tall stature and wide leaves. Monitor your trap barrier to check aphid populations, and dispose and replace the trap plants regularly to keep the aphids at bay.

Even better though, is if the high population of aphids in your trap barrier eventually attracts biological control organisms. Aphids have a wide range of natural enemies: ladybugs and their larvae, hoverfly larvae, and lacewing larvae are all voracious eaters of aphids. Limiting pesticidal control and planting large trap gardens around the windward or upwind side of your farm is in essence preparing a massive buffet of aphids for their predators to notice. Hopefully, they will notice it soon and create a great wall of biological control to limit the aphids infesting the farm.

What’s the difference between foliar and basal fertilizers?