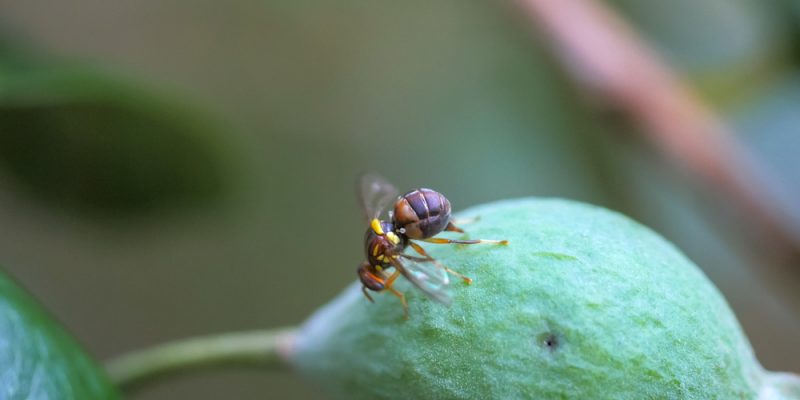 Unlike their relative the common fruit fly, the tephritid fruit flies of the Philippines are serious agricultural pests.

The common fruit fly is not an agricultural pest; they feed mostly on rotting fruit. Meanwhile, the “fruit flies” we know and wish grievous bodily harm on here in the Philippines are from a different family altogether, the family Tephritidae.

Unlike their relative the common fruit fly, the tephritid fruit flies of the Philippines are indeed serious agricultural pests. We must make this distinction as we may wish to look for more information about fruit flies and how to control them, thus this writer hopes that by making this distinction we can avoid possible confusion.

Now that the distinction has been made, this writer shall henceforth refer to any of the above species as fruit flies. 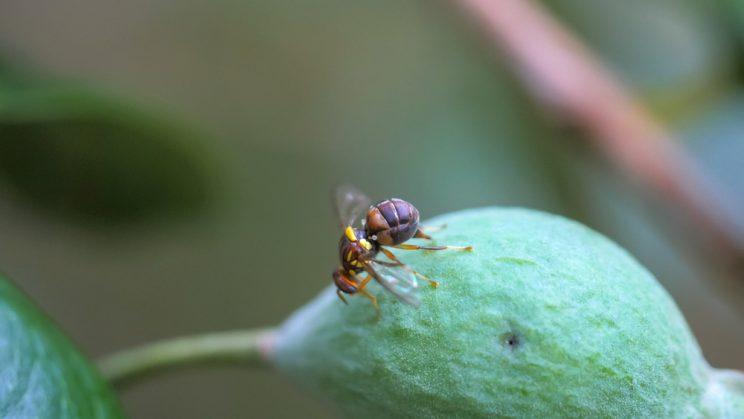 Unlike their relative the common fruit fly, the tephritid fruit flies of the Philippines are serious agricultural pests.

The three main species of fruit fly in the Philippines have a generally similar appearance, their bodies characterized by the colorful yellow markings and distinctive triangular set of their wings. The adult flies themselves feed mostly on rotting fruit and plant nectar, and it is their reproductive habit that makes them such a destructive pest. After a female fruit fly has mated, it will inject its eggs into the flesh of a fruit, for example a mango. One female can lay up to thirty eggs per fruit, and can lay anywhere between one thousand two hundred to three thousand eggs in its lifetime.

When the eggs hatch into larvae, they will begin to consume the fruit from within. The fruit itself becomes unmarketable from the physical damage and decay, and the infestation of larvae. Apart from the physical feeding and decay damage caused by the larvae, the wound also invites bacterial and fungal growth which can spread and damage the plant further. The larvae may also begin to invade the soft tissues of the plant. Most of the time the fruit will fall off the plant, and once the larvae are mature enough they will burrow into the ground to pupate. Upon pupation into adults, these then breed, and continue their cycle of fruit infestation.

Unfortunately, pesticidal control methods are not very effective against fruit flies. Since the main source of damage is by the injection of eggs into and the feeding of the larvae on the fruit, it is quite difficult to control adult fruit flies with pesticides and the risk of collateral damage to the environment is far too great. There is also no real benefit to using systemic pesticides to control fruit fly larvae either, as the fruit will already be unmarketable due to the physical damage caused by the fruit fly injecting its eggs into it. To begin with, most consumers will be against the idea of fruits that have circulated pesticides in its flesh.

Biological control methods have been studied in Hawaii, where researchers have shown promising results in the use of parasitoid wasps in the control of fruit flies. However, this method of biological control is not yet widely available even within Hawaii, and so for all practical purposes this is not one method we can consider using for now.

Instead, fruit flies are most efficiently controlled using cultural/mechanical control methods. There are three main methods recommended, the first is the use of pheromone traps, the second is by bagging your fruits, and the third is simple field sanitation.

Pheromone traps make use of methyl eugenol, which is a highly effective attractant for male fruit flies. Methyl eugenol’s smell is highly attractive to male fruit flies in particular and can attract them within a twenty meter radius. When combined with a trap, this keeps the males from mating with female fruit flies. As such, the females are unable to produce eggs and cannot inject them into fruits.

One final note, bagging fruits in opaque materials like paper will also prevent sunlight exposure. For some fruits such as ampalaya (bitter gourd) this may cause the fruits to become pale and potentially reduce marketability. However, for other fruits like mango, this may be quite beneficial as it protects the fruits from cosmetic damage due to sunburn or sun scald.

Finally, simply keeping good field sanitation by removing all fallen fruits and properly disposing of them away from the field stops the fruit flies from establishing a population in the farm. As mentioned earlier, the fruit fly larvae’s feeding causes the fruit to eventually fall off the plant. After the larvae have grown large enough, they will exit the fallen fruit and burrow into the ground to pupate. By removing all fallen fruit from the farm and disposing of them properly, the larvae will have no place to pupate and cannot continue their life cycle. Dispose of these fallen fruits by deeply burying them in the soil or  an active compost pile, deeper than 20cm is enough. Fruit burning is also an option, though perhaps local fire laws may protest against this.

Combining these three cultural/mechanical control methods is the most efficient fruit fly management program. Methyl eugenol hinders the fruit flies’ ability to mate and reproduce. For those fruit flies which escape the traps and are able to mate and reproduce, fruit bagging prevents them from injecting their eggs into your fruits. Finally, in case some intrepid flies are still able to get their eggs into the fruits despite the bags, removing any potentially infested fruits from your farm breaks their life cycle. In all, the combination of these three methods result in a most unsuitable environment for the fruit fly.