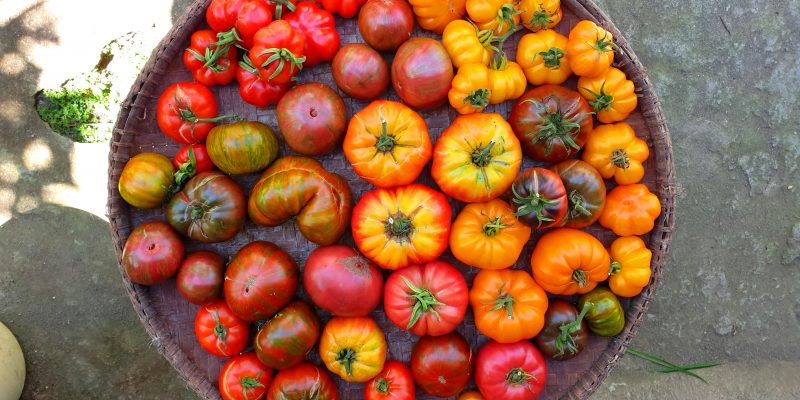 These are beefsteak tomatoes that grow in Celestino’s tomato garden.

Tomato, aka kamatis in Tagalog, is a crop that is extensively farmed nationwide because of high market demand and ease of production.

There are farmers who cultivate them primarily for a living, and then there are home gardeners who grow them within their residence for private consumption and sometimes, for business purposes as well.

Cindy M. Celestino is one of the latter, having chosen to cultivate a garden with tomatoes as the predominant crop.

But instead of growing the common kind of tomato, Celestino gravitated towards heirloom varieties that are grown true to seeds. 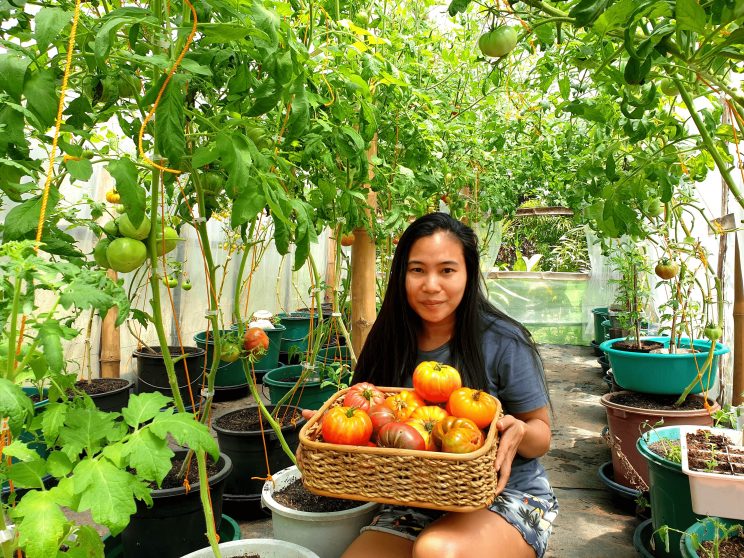 Read: Heirloom tomatoes flourish in containers in a Baler residence

Growing heirloom tomatoes, she says, presents a number of issues since some seeds originate from foreign countries, thus requiring special care. She also pointed out that heirloom tomatoes are more delicate than hybrid ones.

The first difficulty she encountered was the inability of her tomato plants to flower and bear fruit. After studying and reading up on the causes of tomato blossom drops, she found that growing medium, temperature, and infestation play a part in it.

Despite the hurdles, she has finally mastered the art of growing heirloom tomatoes after a few years of trying different techniques.

Celestino shared some requirements and practices that enabled her to successfully raise heirloom tomatoes at home. Here they are:

Growing medium. Choosing the best growing medium is as important as the growth of tomato plants.

In her case, soilless media appeared to be the most beneficial. Celestino uses a mixture of vermicast, cow manure, coco peat, and carbonized rice hull.

Feeding plants with nutrients. The application of fertilizer can be done a month from sowing the seeds. Use natural concoctions like Fish Amino Acid (FAA), Fermented Plant Juice (FPJ), Fermented Fruit Juice (FFJ), and fermented seaweed once a week.

Continue fertilizing them until they are almost ready to flower. Discontinue the usage of FAA and FPJ when flowers start to bloom.

On the other hand, keep using FFJ and fermented seaweed because they help induce flowering. When the tomato plants begin to fruit, use them twice a week to provide enough nutrients to the plants during the fruiting stage.

Watering. The tomato farmer waters the soil once a day. After learning that heirloom tomatoes do not like their leaves wet, she made sure not to moisten their foliage.

She also places a water basin below the plant containers and reuses collected liquid to water the plants. This is carried out to make the most of the nutrients.

Propagation. Celestino also reproduces heirloom tomatoes via suckers since growing from cuttings is way faster than growing from seeds.

“Before I became sure of this, it took me more than a year to experiment on what month they were suitable for the Philippine climate,” she explained in Taglish.

Pest control. One of the unavoidable issues in growing plants is pests and diseases. One common cause of this is moist leaves.

Knowing this, Celestino and her husband created a DIY greenhouse to keep her tomatoes safe, especially on rainy days. This is also the reason why they need to be watered through the soil and not the leaves.

The Celestinos keep pests at bay by planting natural repellents such as marigold, basil, and oregano around the tomatoes.

Observing her tomato plants’ growth for a year taught her a lot of things. Growing heirloom tomatoes may have cost her a lot of seeds and capital before she learned the ropes, but Celestino considers it all worthwhile.