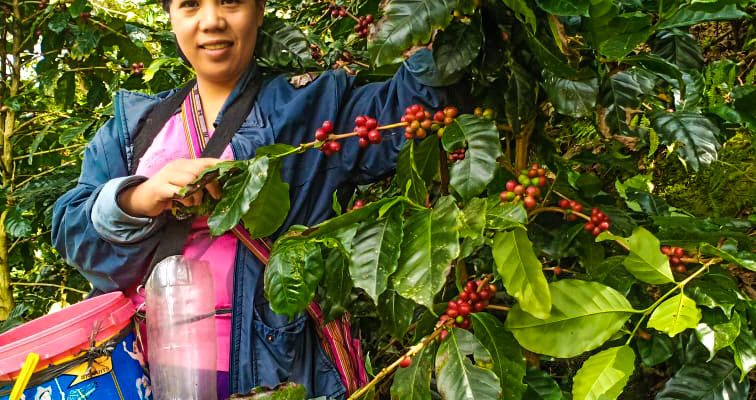 Jennifer Rimando co-founded Ola Coffee Farm which is now a training hub for sustainable coffee production. She empowers her community members, mostly women and the youth, to engage in coffee farming not only to earn a living but also to protect and restore their forests.

Sagada, Mountain Province is one of the Philippines’ top producers of high-quality Arabica coffee. Most of its coffee comes from a northern barangay called Aguid, known for its steep and challenging terrain.

Here, it’s women who are on the lead of the community’s booming coffee industry. On top of that is Ms. Jennifer A. Rimando, the only certified Q Grader in Mountain Province.

Jennifer co-founded Ola Farm with her grandfather, whose nickname is Ola. It was not an easy start, but through perseverance and dedication, they were able to transform Ola Farm into a model of sustainable coffee farming, as well as a learning hub.

Today, it’s one of the most visited coffee farms in the country, attracting even international coffee  aficionados.

How Did Ola Farm Start?

Lolo Ola had the idea of starting a coffee farm in Aguid when he visited farms in Benguet and attended seminars. Inspired by the possibility of owning his own coffee farm, Ola began planting coffee under the pine trees on the steep mountainsides. Unfortunately, more than 90% of the coffee planted died during the first year.

Many local community members began doubting Ola and even mocked him for his failed start. He also began attending seminars and applying what he learned. One of the new approaches he implemented was the integration of Alnus trees (Alnus glutinosa), known for their nitrogen-fixing properties. Years later, the coffee began to bear cherries, belying the claim of some community members that it’s impossible to grow coffee in the area. 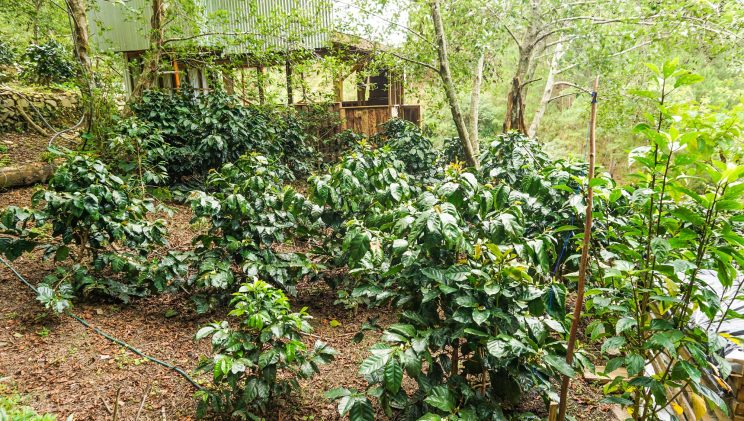 One of the three sites of Ola Farm which sits on a gentle mountain slope and surrounded by pine forests. Alnus trees are intercropped with coffee to serve as shade and as a source of nitrogen.

While he was just starting out, Ola involved his granddaughter Jennifer, who also discovered her passion for coffee, in the endeavor. Eventually, Jennifer began attending seminars not only on coffee production but also on post-harvest processing. She consistently applied her learnings on what would become Ola Farm.

With support from the government and some private organizations, Jennifer was able to successfully complete a cupping seminar and workshop. Thus, she became a Q Grader. Her certification also emboldened the popularity of Ola Farm and soon, more and more buyers bgan to express interest in sourcing coffee from her. Today, Ola Farm is an accredited-learning site by the Agricultural Training Institute of the Department of Agriculture. Jennifer has also became one of the most sought-after coffee speakers by the Department of Trade and Industry including TESDA. 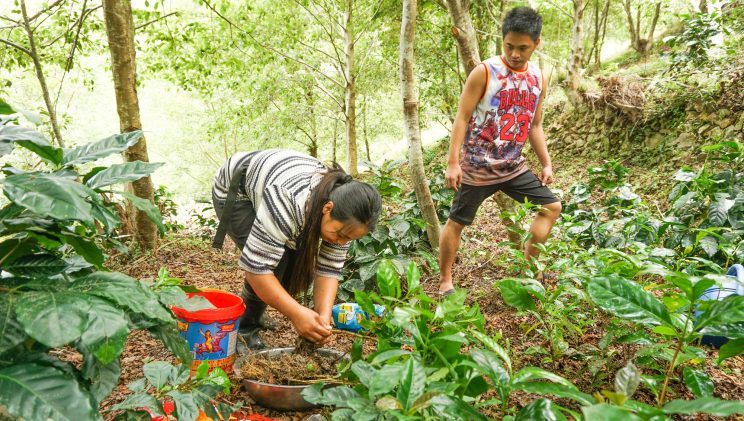 Jennifer demonstrates how to properly handle and prepare seedlings for planting.

What’s unique about Ola Farm and its coffee?

This site of Ola Farm lies next to the mossy forests of Sagada, which are an important watershed. Because of its high elevation, coffee grown here is of exceptional quality.

Ola Farm presently has three sites, all of which sits at an elevation of 1600-1800 meters above sea level. All of the coffees grown here are of Arabica species, primarily, Mundo Novo and Red Bourbon. Typica, known for its aroma and exceptional cup quality, is also intercropped.

Alnus serve as shade trees because of their nitrogen-fixing components, which contribute to dark green leaves and productive branches of Ola Farm’s coffee trees. Interestingly, most other coffee farmers in Sagada also use Alnus as shade for their crops. 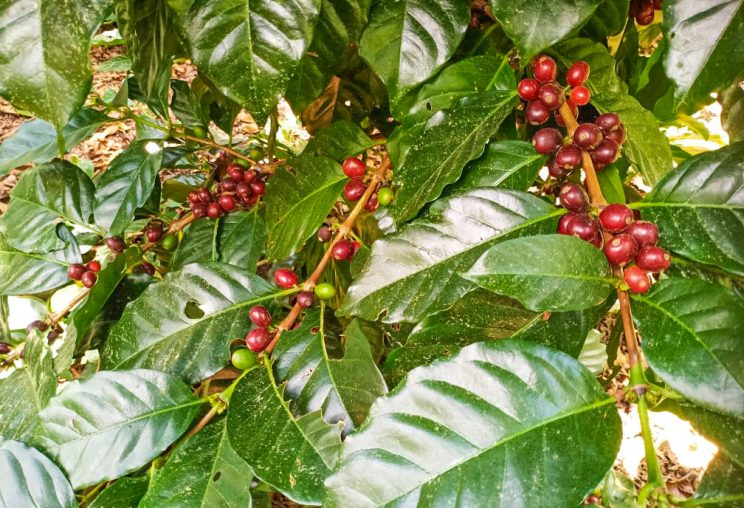 Ripe coffee cherries of the Mundo Novo Arabica variety. These cherries are known for their
citrusy and green apple flavors.

Jennifer shared that aside from providing nitrogen, Alnus is also a good and sustainablen source of firewood. It grows fast and can be trimmed for firewood from time to time.

Because of its high elevation, Ola Farm’s coffee develops sweet and complex flavors. This writer had the chance to cup coffee with Jennifer and consistently, each sample had hints of citrus and green apple flavors. Some also had a nutty finish. This complexity of flavor is sought after by high-end coffee shop owners and roasters. It’s no wonder why Ola Farm supplies some of the country’s top-notch coffee players, as well as the international market. 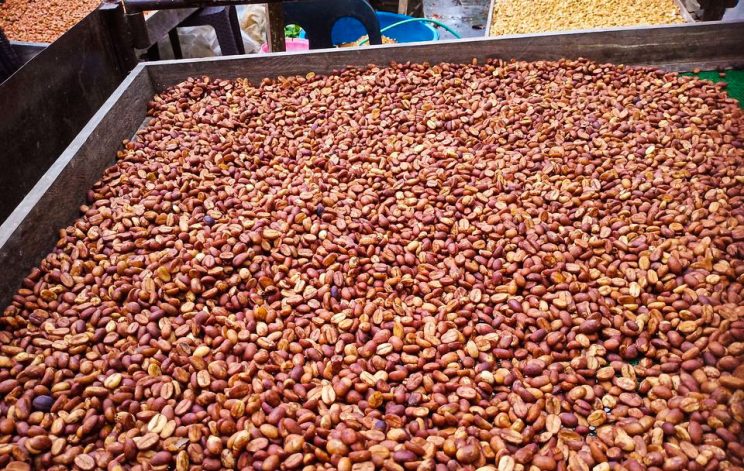 Coffee cherries that have been rendered using the honey-processing method. This method brings out more flavors from the coffee.

Driven by her passion to give back to the community, Jennifer frequently conducts training sessions and seminars for people who want to learn coffee farming. She is also a sought-after speaker by both government and private sectors.

Even before she became a certified Q Grader, she was already sharing her learnings with other farmers. From time to time, she invites women farmers for cupping sessions and teaches them how to identify the unique features of their coffee. In that way, they know what to market and therefore, are able to demand higher prices. Jennifer believes that women play an integral role in Sagada’s coffee industry. In fact, she also involves them when establishing a new farm or planting coffee.

But of course, she not only shares her expertise with women but with all interested members of their community and beyond. That is why she frequently gives talks to farmers and organizes farm immersions for an actual coffee farming and processing experience. Jennifer is also well-traveled, thanks to generous government and private sponsors. She was able to share her learning and experiences in different provinces in the country and in Italy.

In addition, Jennifer advocates for sustainable coffee farming. For that reason, she adopts the agroforestry style of farming, wherein various crops and species are integrated, a stark contrast to the monocropping system. For her, diversity is paramount to quality. 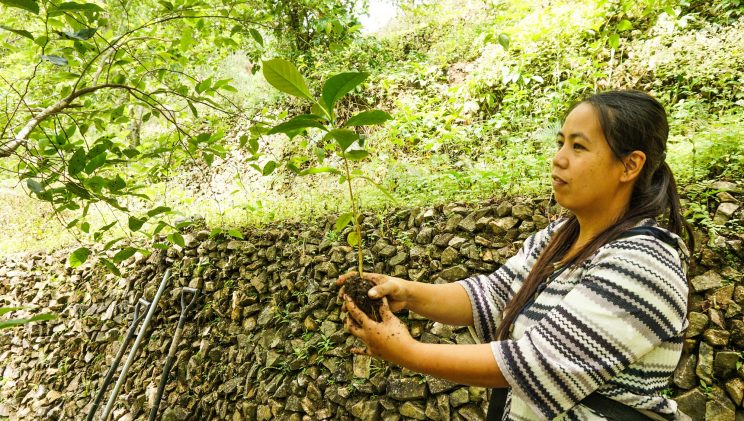 Driven by her passion to give back to the community, Jennifer frequently conducts trainings and seminars for people who want to learn coffee farming. She is also a sought-after speaker by both the government and private sectors.

In one of Ola Farm’s sites, herbs, vegetables, and other crops are planted alongside coffee and the shade trees. They also have a small pond with tilapia. Moreover, they raise chickens on this site to help fertilize the soil. One can also see different kinds of birds on Ola Farm, showcasing the area’s biodiversity. These birds aid in controlling insect pests.

Jennifer shared that her grandfather Ola convinced the community to protect local civets instead of hunting them. Civets frequently visit Ola Farm and other coffee plantations as they thrive in the surrounding mossy and pine forests. They feast on ripe coffee cherries, which are processed in their gut before excreted as waste. These beans fetch a high price in the market. Civet coffee is the most expensive coffee in the world.

Because she believes in ecological farming, Jennifer only applies organic inputs to her coffee plants. She also encourages her fellow farmers to use natural farming practices, not only to protect the soil and local biodiversity, but also the community’s water supply.

Indeed, while Ola Farm has continuously and consistently pursued coffee cup quality, it has also embarked on a mission for the community and beyond.