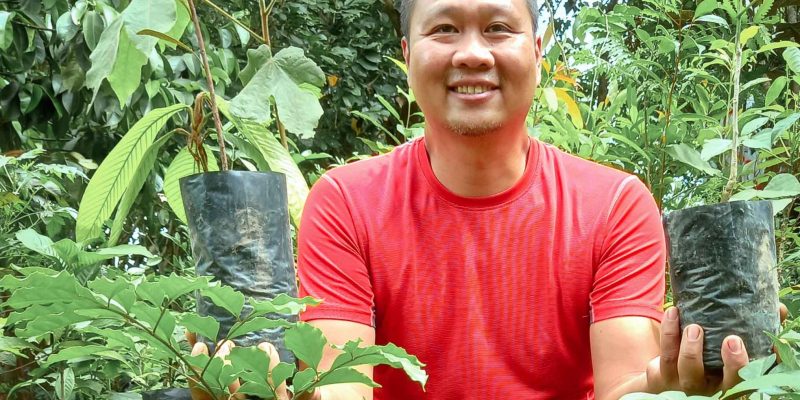 Batangas-based writer Marcial “Macay” Enginco is constantly worried about the environment. From climate change to decreasing forest coverage, Macay is worried how all these bad news can impact the Philippines. As a plant enthusiast, he is particularly concerned how these developments can affect the existence of plants that are native to the country.

This is his main drive for selling indigenous plant seedlings. He runs a Facebook page called TreeBu as a platform to sell and promote native plants. By finding households and communities which are willing to grow these plants on their own private lands, Macay is able to spread passion and awareness for native plants. He thinks that should the worst occur and these plants are wiped out in the wild, people will still have them in their own farms or backyards. 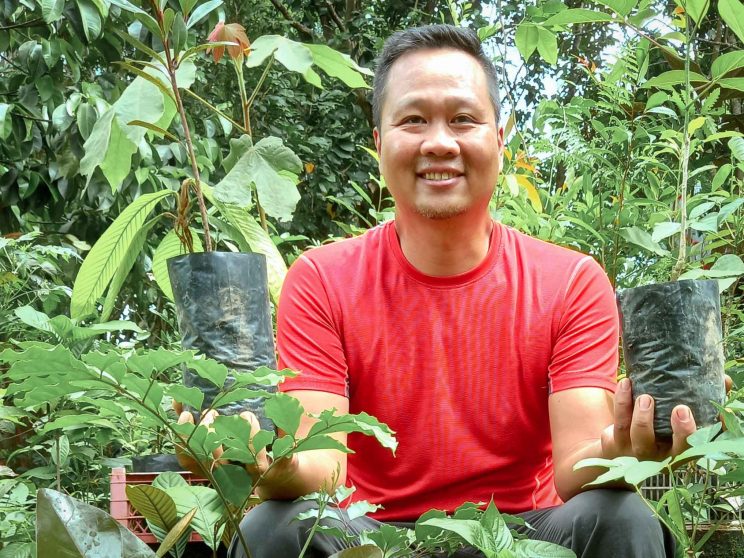 Macay got his passion for plants from his parents, but he only started recently planting for pleasure. He was always into outdoor activities and nature, so it was easy for him to appreciate gardening.

He never thought he would have a career in gardening. He took communication arts in college and worked as a copywriter in Metro Manila. He and his wife decided they wanted a simpler life, so they moved to Lipa—Macay’s hometown—in 2008.

They needed a source of income so they ventured into multiple businesses. For a time, they had a salon, an accessory shop, and even a rock climbing facility. In 2014, he also started beekeeping as a side hobby and made money through it.

In August 2019, Macay returned to writing when he launched the TreeBu Facebook page. It started as a hobby just to write and share about his passion for indigenous plants. He was also thinking about a fallback in case he had to give up his beekeeping business, so he wanted to see if there was any traction and market for indigenous plants. He thought that if he could convince people to think like him through his writing, then TreeBu could possibly be the start of a business. His plan worked, so he started selling plants through TreeBu.

Having TreeBu was timely as he had to remove his backyard apiary in March 2020 when neighbors started complaining about bee droppings. Around the same time, the Engincos were already making money from TreeBu so without his beekeeping business, Macay decided to commit his time to TreeBu as a business.

TreeBu started as a hobby

During the early months of TreeBu, Macay went to several nurseries to ask what indigenous plants were available. Macay brought them home and then wrote about them in TreeBu.

Even when he was still into beekeeping, he saw the potential of TreeBu because people kept asking him if he was also selling the plants he was writing about. This assured him that there really was a market for indigenous plants. In the beginning, he admitted that he did not have the plants, but he told people that he was happy to find those plants for them. 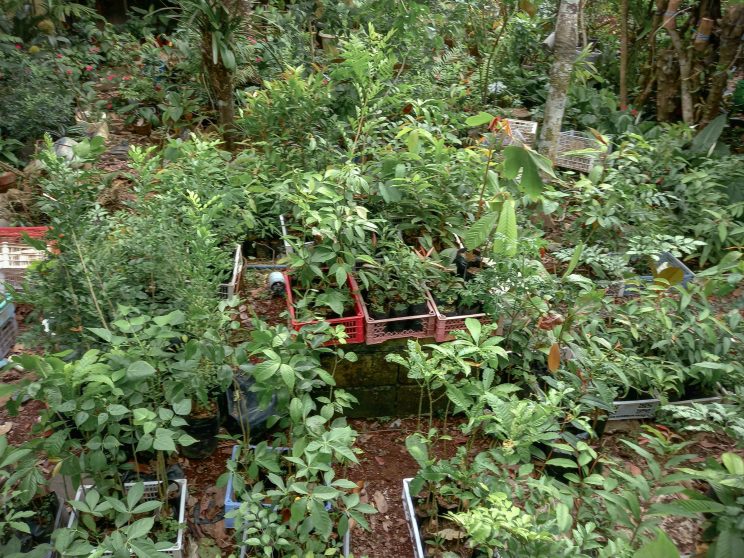 Macay operates a mini nursery in their backyard garden.

What further assured him to keep TreeBu as a business was a purchase from a landscaper who wanted to acquire botong trees (Barringtonia asiatica). Macay was not selling botong trees at that time but he found a nursery that did. Since he had a personal relationship with the nursery owner, he was given a discount for the purchase of 120 botong trees, which he resold to the landscaper for a profit.

Another challenge was how to sell plants that no one knew about, which Macay was actually fine with.

“Okay lang sa akin yun kasi part ng gusto ko mangyari is to educate people (I’m fine with the challenge because part of my mission is to educate people),” Macay said. “When you educate people, di siya mahirap ibenta kapag naiintindihan nila yung binebenta ko (it is not hard to sell these plants when they understand what I am selling).“

He said that he likes to tell stories when writing for TreeBu to help his customers imagine the possibility of owning the plant he is writing about. By personalizing his posts, he helps create a relationship between the reader and the plant.

Macay primarily advocates for four plants, which are also the top purchases at TreeBu. The first is the salinggogon, which is likened to cherry blossoms. He hopes for the salinggogon to replace balayong (Cassia nodosa), the Palawan cherry blossom, in popularity. He explained that after research, he found out that balayong trees are not actually native to the Philippines.

The second plant he promotes is the mangkono, which is known as Philippine ironwood. He said that owning a mangkono is a source of pride for their owners as the tree has multiple unique traits. Macay explained that mangkono is known as the strongest native hardwood tree in the Philippines. The tree also blooms with flowers that he described as the “reddest of reds.”

Macay also promotes balai lamok for its aesthetic properties. He likes it so much that he even uses its flowers as the profile photo of TreeBu. The fourth plant he promotes is the malabulak, which he said is a native alternative to kapok (Ceiba pentandra), a tree cultivated for its cotton-like seed fiber. 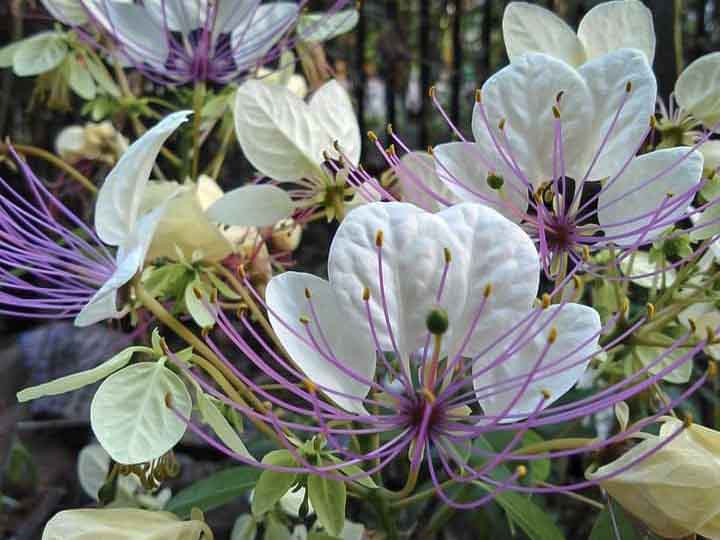 Balai lamok (Crateva religiosa) is one of the plants that Macay actively promotes.

Extending his passion through landscaping

Aside from selling seedlings, he was able to extend his passion for indigenous plants through landscaping projects.

His first project as a landscaper was for a friend who lived in a subdivision. His friend had a big cut of land and needed help with landscaping. Macay accepted the project under the condition that he would only plant indigenous trees. His friend said that he also wanted to add exotic plants, which Macay agreed to as a compromise.

Macay’s wife has an uncle and aunt who lived in the same subdivision. They told members of the homeowner’s association about Macay’s landscaping project, so Macay got to talk with the association for another project.

Macay told them that they could plant indigenous trees in several common areas of the subdivision. The members of the association asked if he could also plant exotic plants, which Macay was fine with, but advised against. He explained to them that if land is sparse, it should be used to prioritize native trees rather than exotic plants.

The homeowner’s association agreed to Macay’s vision, so he was tasked to landscape their minipark. There are two other pending projects which are contingent on Macay getting a certificate from a regulatory body. He needs this as he wanted to cut down around 500 Mahogany trees and African tulips (Spathodea campanulata), which he found were invasive. 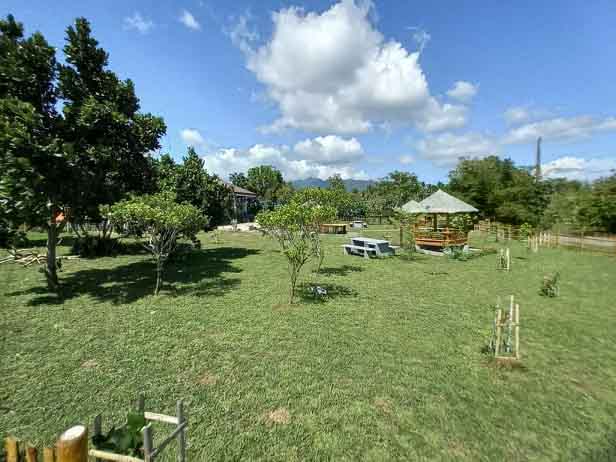 Macay designed the landscaping of the Santa Monica Park, which is located in a subdivision in Lipa, Batangas.

As for the African tulips, Macay explained that these plants kill native bees.

Macay plans to replace these trees with native hardwoods. He shared that he envisions a mini forest inside the subdivision with an educational trail that children could visit to learn about native trees.

Asked if he was challenged with the scope of the project, he was quick to admit that he actually was.