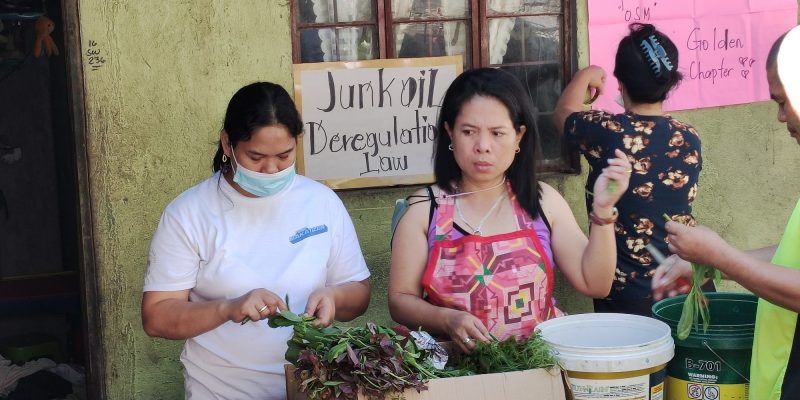 The COVID-19 pandemic and the resulting lockdowns necessary to halt its spread has laid bare the lack of support in various sectors of society. This was most evident in marginalized sectors, particularly the urban poor.

Because of this, a group of concerned citizens, including food justice advocates, chefs, and urban poor organizations, collaborated to form Lingap Maralita (LM), a social enterprise that provided freshly cooked vegetable-based dishes to marginalized communities.

The program ran for 16 weeks, after which the leaders of some of the beneficiary communities approached the LM organizers requesting a more sustainable project. “It was really their idea,” says Mabi David, Good Food Community’s (GFC) Advocacy and Partnerships Lead and member of Slow Food Sari Sari. GFC is a community-supported agriculture organization that offers vegetable subscriptions to customers based on what’s harvested by their partner smallholder farmers. “Nung tinanong namin kung ano ibig sabihin nun sa kanila, gusto nila makapag tanim… ng sarili nilang pagkain. (When we asked what it meant for them, [they said] they want to grow… their own food.”

This is how Food Today Food Tomorrow (FTFT) was born. FTFT’s aim is twofold: to provide participating communities with “food today” via community kitchens and “food tomorrow” via community urban gardens. 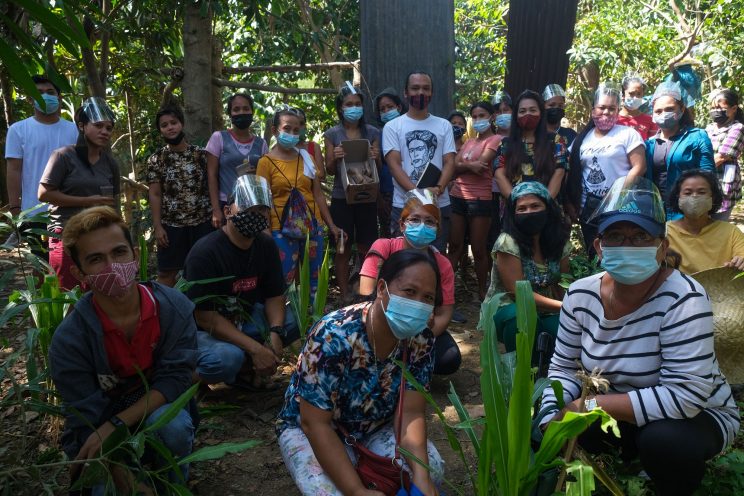 The first urban garden was set up in Golder Shower, a community in Payatas, with the help of urban poor organization PLM (Pinagkaisang Lakas ng Mamamayan) Payatas. 20 volunteer urban farmers were divided into clusters of five. “We took the cluster approach para may social aspect yung food production, masupportahan nila yung isa’t-isa, tapos kung hindi lahat makakattend sa training, may isang magtuturo (We took the cluster approach so there would be a social aspect to food production, so they could support each other, and if someone can’t make it to the training, someone would teach them),” David says.

The volunteer farmers were composed of housewives and folks who lost their livelihood during the pandemic, some of whom used to be farmers before migrating to the city. The idea is that after being trained and establishing the garden, these farmers would in turn help and train other communities to do the same thing. “…karamihan, mga kababaihan dahil yung food security concerns sa pamilya, sa babae minsan kadalasan bumabagsak (Many women [signed up] because the family’s food security concerns often fell on them),” says community organizer and PLM member Angeline Mendoza. 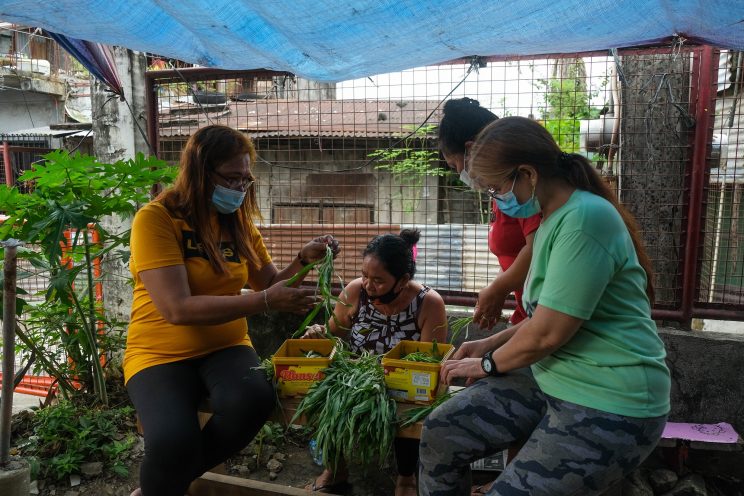 A second urban garden was set up in Bagong Silangan. 25 volunteers signed up. Because they had ample land area to plant on, they didn’t need to rely on container gardens. “… bukod sa alam nilang makakakuha sila ng pagkain after magtanim, kikita sila… hindi man sapat, pero malaki ang naging tulong sa kanila (Aside from knowing they have food to eat after harvest, they can also make money… it’s not enough, but it’s a big help),” Mendoza says.

As pandemic restrictions lifted and jobs became available again, some of the original farmers from both communities have had to stop tending to their gardens. Fortunately, others have taken up the cause. At the moment, there are about 70 volunteer farmers, as well as a request to set up a similar community in Cavite.

Another challenge is that since many of the volunteer farmers are renters or unhoused, one of the biggest challenges they face is not just the uncertainty of their living spaces, but of their urban gardens as well. It is not uncommon to hear stories of gardens being demolished to make way for other projects.

For the most part, the urban gardens have had a positive effect on the volunteer farmers, and not just for food security reasons. “ May bagong na-meet na magkakaibigan. Doon sa urban farming nila nabuhos yung stress nila noong pandemic (They’ve met new friends. Urban farming is a way to relieve their stress from the pandemic),” says Rose Canubas, also a community organizer and PLM Payatas member. 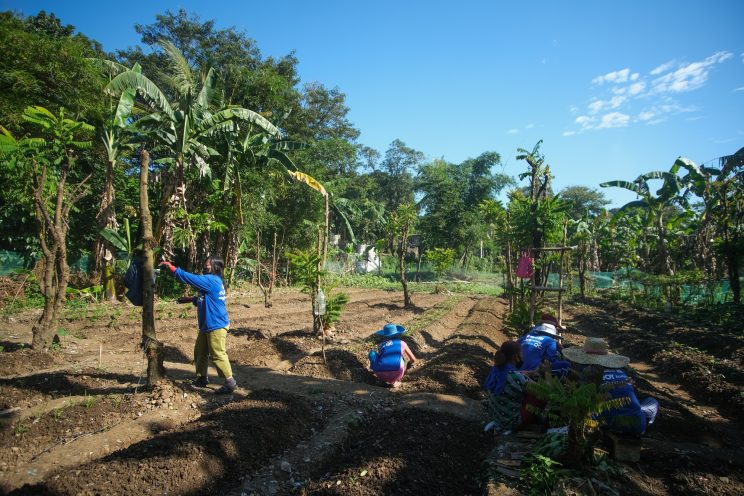 When a community begins to work together, others begin to take note. The local barangay, for example, donated food boxes in support of the urban farm. “…habang umuusog talaga yung programa, napapansin talaga namin dumadami din yung tumutulong (Once the program is underway, we’ve noticed that the number of people who want to help increases),” Mendoza says.

Food Today is a solidarity share program where GFC customers can buy a solidarity share of vegetables that is turned over to the participating communities. Sometimes, the smallholder farmers who work with GFC donate vegetables as well. The vegetables are used as ingredients in a community kitchen program called Kusinang Bayan. The participating communities pool funds to purchase the rest of the ingredients such as cooking oil, and the dishes are distributed among the participants. The program served about 14,988 meals in 2021 based on the Oct-Dec average of 483 meals per week. 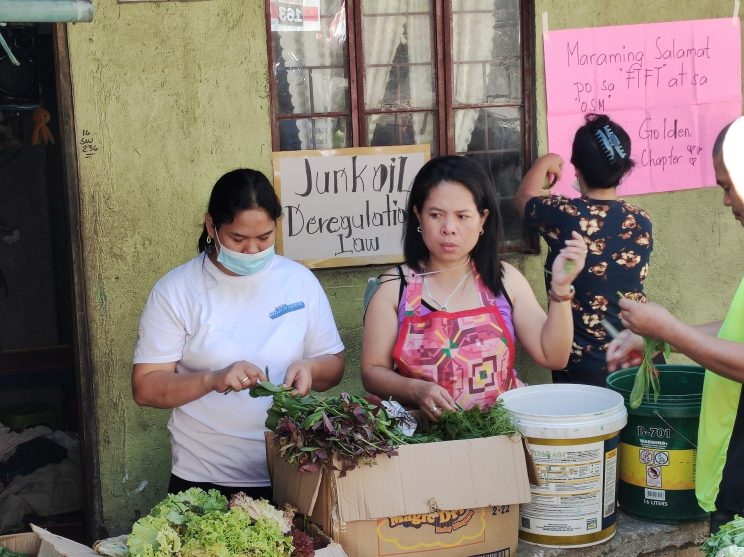 Ultimately, the community kitchen is a stopgap measure. What the members of urban poor groups like PLM are really fighting for is government support of their basic rights such as permanent housing and food and job security. Until that happens, FTFT will remain active in helping foster localized food security, one urban garden at a time.

FTFT welcomes volunteers for the urban gardens and Kusinang Bayan. They’ve also published a cookbook called Makisawsaw, a book of recipes donated by celebrity chefs, whose proceeds are used to fund both endeavors. To learn more about FTFT, visit https://foodtodayfoodtomorrow.wordpress.com/communityofpractice/